A couple who once spent 17 hours a day working to pay down their mortgage have revealed how ditching the ‘dream life’ is the best thing they’ve ever done. Adi, 39, and Logan Courtney, 37, who are now based in New Zealand, live in a converted freight truck, one which cost $35,000. ‘It just wasn’t

A couple who once spent 17 hours a day working to pay down their mortgage have revealed how ditching the ‘dream life’ is the best thing they’ve ever done.

‘It just wasn’t working,’ Adi told FEMAIL of her former life on the Gold Coast, ‘we were just miserable.

‘Logan and I were working 17-hour days at our landscaping business to pay off a $450,000 mortgage. The emotional stress caused me to miscarry and the physical pressure was literally killing him.

‘He’d gotten to a point where he had paralysis in one hand and calcification of his joints in the other, an osteopath said if he didn’t stop working, he would die. 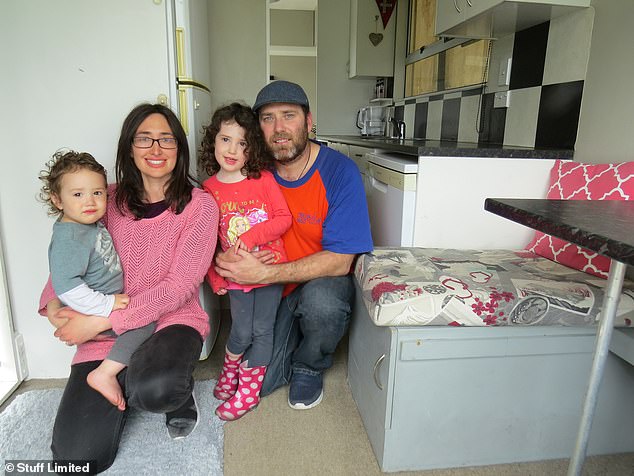 ‘We knew we had to make some drastic changes.’

In 2015, the couple, along with their daughter Mia, who was 18 months old at the time decided to move to New Zealand, where Logan was from.

While Adi was thrilled by the idea as she’d never visited the country, the question of where the family were going to live needed to be addressed:

‘We knew housing was just as unaffordable there as it was here and we didn’t want another hefty mortgage.’ 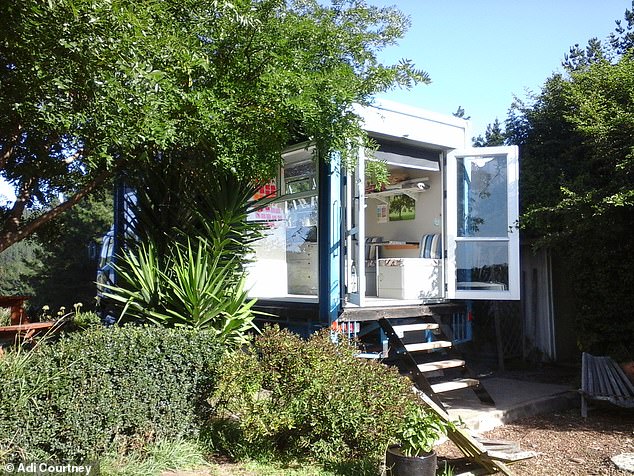 This converted freight truck which the Courtney’s now call home (pictured) cost a total of $35,000

After some research, the duo also decided to ditch the option of renting.

While they’d not considered it originally, the idea it might be possible to live in a mobile home while travelling the country started to appeal.

‘I went on Trademe (an online auction site) and started looking at motorhomes and caravans,’ Adi said.

Their new home – one they bought sight unseen – was a 16-square metre freight, curtainsider​ truck which had been converted into a one-bedroom unit. 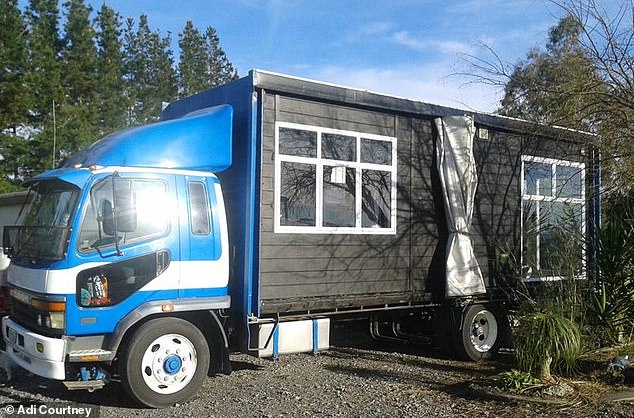 It came complete with a queen-size bed and full-size dishwasher, fridge and freezer, shower and portable toilet.

A generator supplied electricity to the mobile home which meant the truck wasn’t dependent on being parked somewhere close to a supply.

‘I did think this way of life seemed a little strange, but I also thought it seemed very do-able,’ Adi recalled. 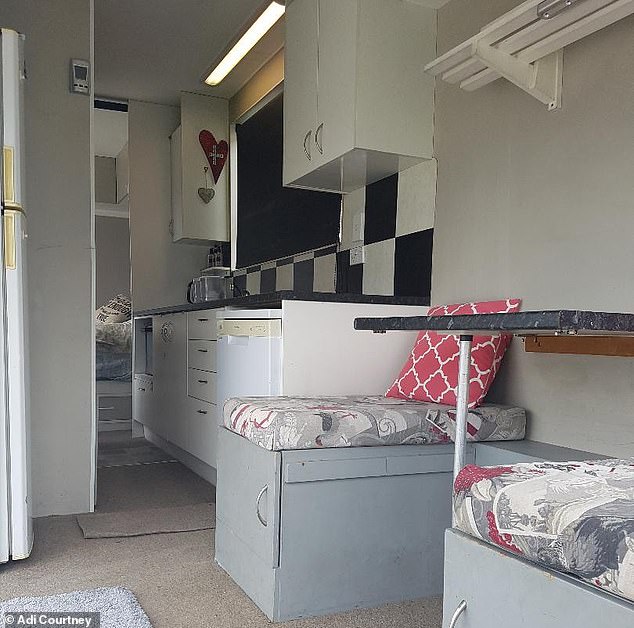 The 16 square-metre home features a fully function kitchen which includes a full-size dishwasher, fridge and freezer

After selling their home as well as the business and putting their most valuable possessions into storage, the family headed off to start their new life with just a suitcase each.

They arrived in New Zealand in July 2015, collected their truck from the airport, and headed off to surprise Logan’s relatives who lived on a farm just outside Auckland.

Despite their new home being much smaller, everyone, including Mia who was a toddler at the time, took to life in the truck with ease. 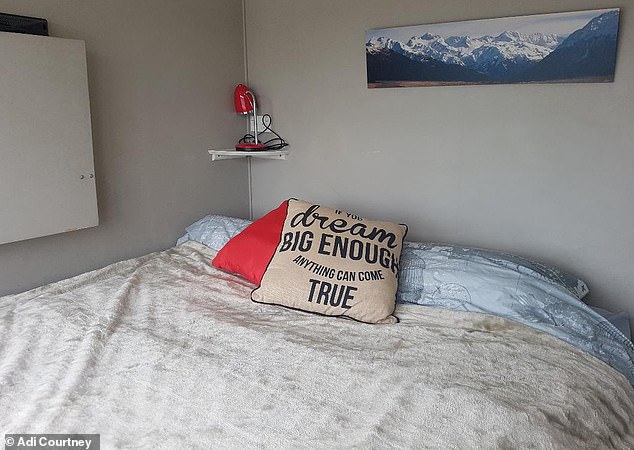 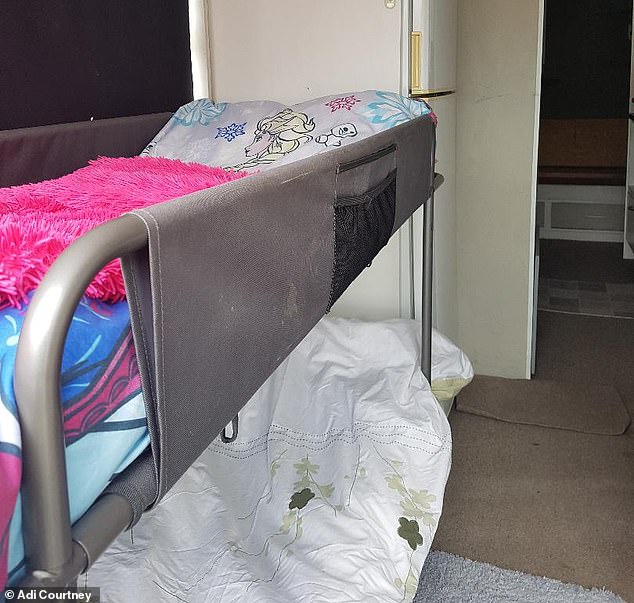 The children, aged five and two, sleep in bunk beds which have been set up in the main living area of the truck

‘We felt free for the first time. Suddenly we had no mortgage, no repayments and we didn’t owe anyone anything.’

As well as not being burdened by debt, the family’s off-grid lifestyle also costs very little to fund.

Adi explained if they’d rented they would have expected to pay anywhere between $300 – $600 a week.

Living on the road cost the family $645 a month, a figure which includes power, water and campground fees. Food is a separate expense and costs on average $300 per week. 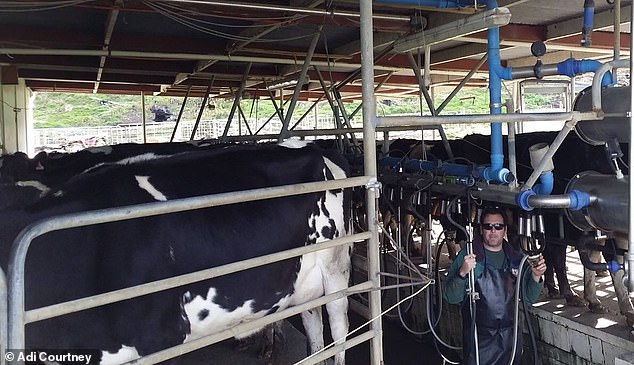 ‘The best thing about this was Logan had the opportunity to try out different things and discover new talents,’ Adi said

‘We had some savings and we didn’t need much to live off,’ said Adi of their off-grid lifestyle.

And she added: ‘The best thing about this was Logan had the opportunity to try out different things and discover new talents.’

A stint of working an office job would see the pair redefine the term ‘working remotely’, Adi explained.

‘We parked up the truck at a campground in South Auckland and would go to meetings in the city in suits.’ 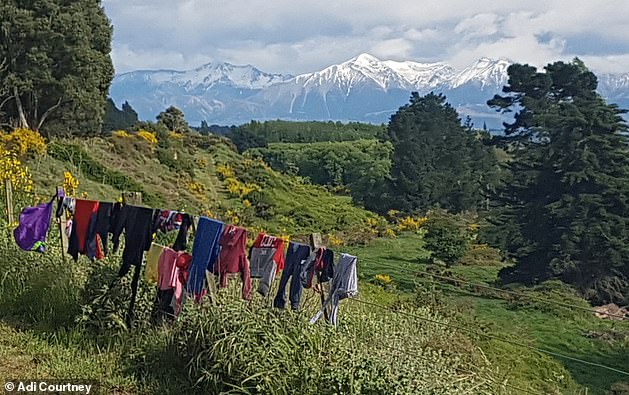 If the view isn’t to their liking, the family can simply pack up the truck and move on to somewhere else

While their situation is unusual, it’s a life the family say they have embraced with both hands.

So much so when Adi got pregnant with her son David, who is now almost two, there was no question they’d keep going.

To make their new arrangement work, a bath for their baby was fashioned from the kitchen sink and a portable cot was set up in the back of the truck.

‘Having a baby in the truck was great. I didn’t have to clean a big house and the baby learned to crawl on the grass.’ 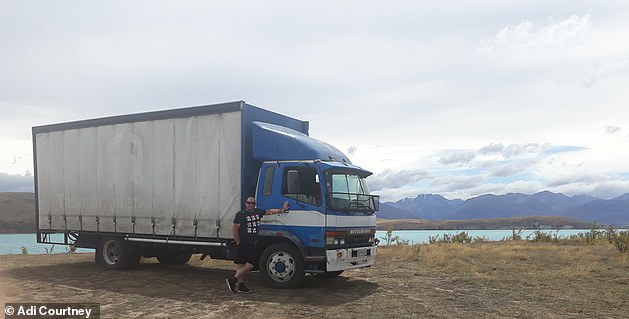 Life on the road couldn’t be easier, especially when there aren’t heavy financial pressures to consider

While it might seem a family of four would struggle to live peacefully in such a small space, as it turns out, with money pressures off, life is far simpler.

‘When you stop worrying about money, everything else seems to flow,’ the mum-of-two said.

‘We are actually stronger as a family unit. We enjoy the outdoors more, we enjoy different experiences.’

Over the past three years, the couple has explored the length and breadth of New Zealand and they’ve also bought property along the way. 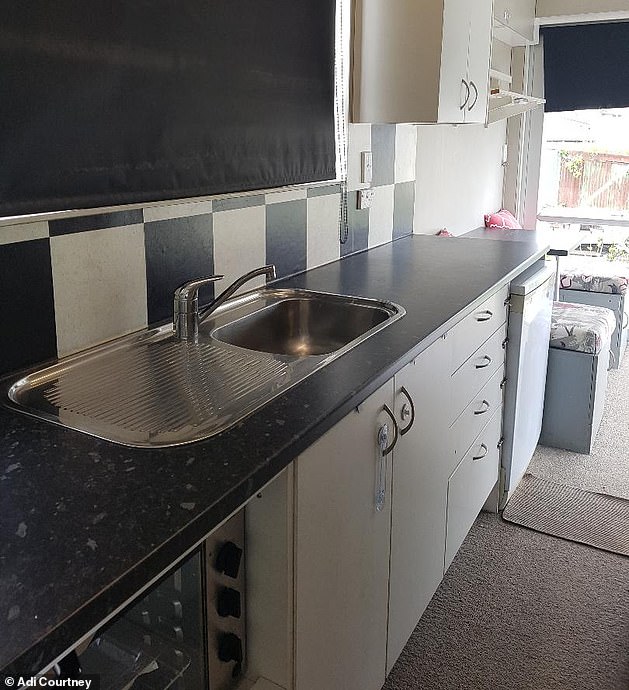 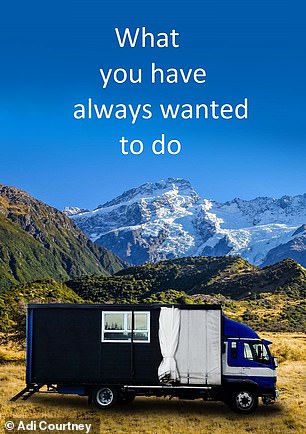 Currently, they’re living in the South Island in Greytown. They bought a house for $45,000 and they’re in the process of renovating it with a view to renting to tenants.

Once this project is done, Adi said the family are keen to pack up again and hit the road.

‘We like our freedom too much to be stuck in one spot.’

For those wanting to take a similar leap, the couple has written and published a book What You Have Always Wanted To Do.

They offer detailed advice gleaned from their years living in a mobile home and believe if they’ve been able to do what they want, then anyone can.

‘It’s about thinking differently,’ Adi concluded. ‘You don’t have to keep up with the Joneses.

‘We took a leap of faith and we have no regrets. Life is too short to not do what you’ve always wanted to do.’