Anthony Joshua’s American Dream was transformed into his worst nightmare by the ‘chubby kid’ Andy Ruiz Jr on a scarcely believable night at Madison Square Garden. The rank outsider, who was only selected as an opponent a month ago, climbed up off the canvas from a crunching left hook after 45 seconds of round three 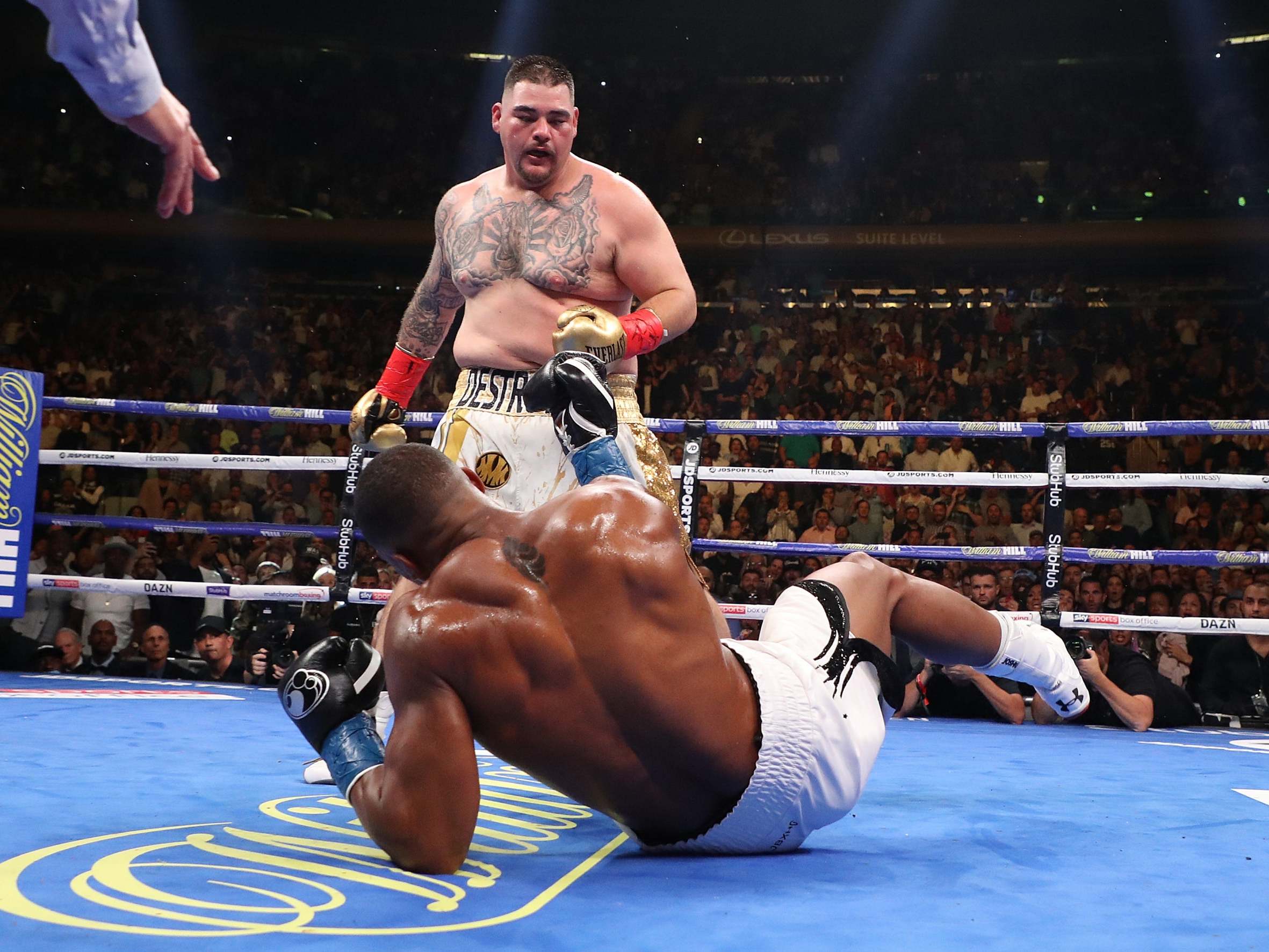 Anthony Joshua’s American Dream was transformed into his worst nightmare by the ‘chubby kid’ Andy Ruiz Jr on a scarcely believable night at Madison Square Garden.

The rank outsider, who was only selected as an opponent a month ago, climbed up off the canvas from a crunching left hook after 45 seconds of round three to somehow topple the now-former WBA, WBO and IBF heavyweight champion.

Joshua, however, was himself felled twice before the end of the round and only the bell seemed to save him as he clambered up onto unsteady legs beneath the iconic old roof of the Manhattan Mecca.

The London 2012 Olympic medallist appeared to have regained his composure in the following rounds but Ruiz put his foot down once again at the start of the seventh and Joshua hit the canvas twice within the first minute of the stanza.

AJ was back on his feet in time but he retreated to his corner where he stayed as referee Mike Griffin completed his count. In one of the more bizarre moments of modern heavyweight history, there he stood, giving the man in the middle no choice but to wave it off.

As Ruiz danced in the middle of the ring in celebration as Mexico’s first ever heavyweight champion, a shockwave was sent through the heavyweight division, where both Deontay Wilder and Tyson Fury will have been watching on agape. Much like most of the crowd.

Now attention will turn to an immediate return, with a rematch clause etched into their fight contract, and the pair will do battle back in Britain before the year is out.

“Maybe this is what he needs,” said promoter Eddie Hearn. “We will absolutely have an immediate rematch – and maybe Andy Ruiz will win it.”

Andy Ruiz Jr, who was beaten in his only other world title fight by Joseph Parker, only got the call up to fight a month ago after Joshua’s initial opponent, Jarrell Miller, failed a series of VADA tests.

It was clear that this whole promotion would have had a more defined edge had Big Baby not turned to PEDs given his apparent ability to get under Joshua’s skin. The pair had bickered during the promotional tour and Miller even shoved Joshua in the chest and insulted his mother during a press conference in New York.

Ruiz, meanwhile, just looked happy to be here – and rightly so. Not only was he handed a once-in-a-lifetime opportunity to win Joshua’s IBF, WBA and WBO belts but he was reportedly in line for the best part of £3m for his part in the fight. Not bad for a guy who earned just $30,000 for a fight last year.

Aside from labelling Ruiz Jr a ‘big robot’ weeks ago, the Mexican-American did nothing to irritate Joshua, who even let his opponent pose with the world title belts at a bizarre final press conference on Thursday. Given his smiley disposition and hardly honed physique, Ruiz had looked not too dissimilar to a competition winner.

And a further pin was driven into the promotion on Friday when it was announced that Wilder and Fury, Joshua’s main heavyweight rivals, have signed to face each other for a second time at some point in early 2020.

Although it did not totally take the shine off Joshua-Ruiz, it was certainly a talking point.

With Wilder already signed to face Luis Ortiz later this year, Joshua had spoken of his desire to steamroll Ruiz before setting up a face-to-face meeting with Fury about a colossal battle-of-Britain. But Friday’s news appeared to make a mockery of that idea.

Joshua’s next opponent, however, was not on the agenda inside Madison Square Garden where a near-capacity crowd whipped up an atmosphere for the ages which was befitting an American debut for a man used to drawing around 80,000 back home.

Having shadowboxed his way through most of the three national anthems – Mexican, British and American – Joshua made a composed start and the crowd were expecting him to reach a crescendo of his own before too long.

The breakthrough came after six minutes and 45 seconds of probing when an uppercut stiffened Ruiz and a left hook sent him tumbling for the first time in his career.

But he took his time to rise and did not look sorry for himself.

Instead, the veteran of nearly 200 amateur fights on either side of the American-Mexican border, went for broke. It was a left hook which did most of the damage but a right hand to the top of Joshua’s head sent the champion to his knees.

Round four passed with little action as Joshua, and to some extent Ruiz, attempted to regain the senses so scrambled in the third. It was not until the fifth that Joshua landed anything meaningful again but a clipping left hook did not trouble Ruiz too much.

Joshua was not boxing with anything like the confidence which has underpinned his rise to the top of the sport. Ruiz, on the other hand, was a competition winner no more but instead resembled an underdog on the verge of hitting the jackpot.

And that’s exactly what he did in the seventh. Back on the front foot from the bell, Joshua was on the deck twice within a minute of the start of the round. It was then that he leant back against the ropes like a man casually waiting for a bus.

Griffin had no choice but the stop it right there and then 24 seconds after the count started, changing the face of global boxing in the process.

Joshua, in no mood to talk, said: “I will come back and tighten up a few bits and bobs. It just wasn’t my night. But do you know what? It’s good for TV.