Follow the latest updates live from the Carabao Cup quarter-final between Aston Villa and Liverpool as the two Premier League sides battle it out for a place in the last four. Liverpool are not only without their entire first-team squad for the match but also manager Jurgen Klopp, with the senior side in Qatar for the 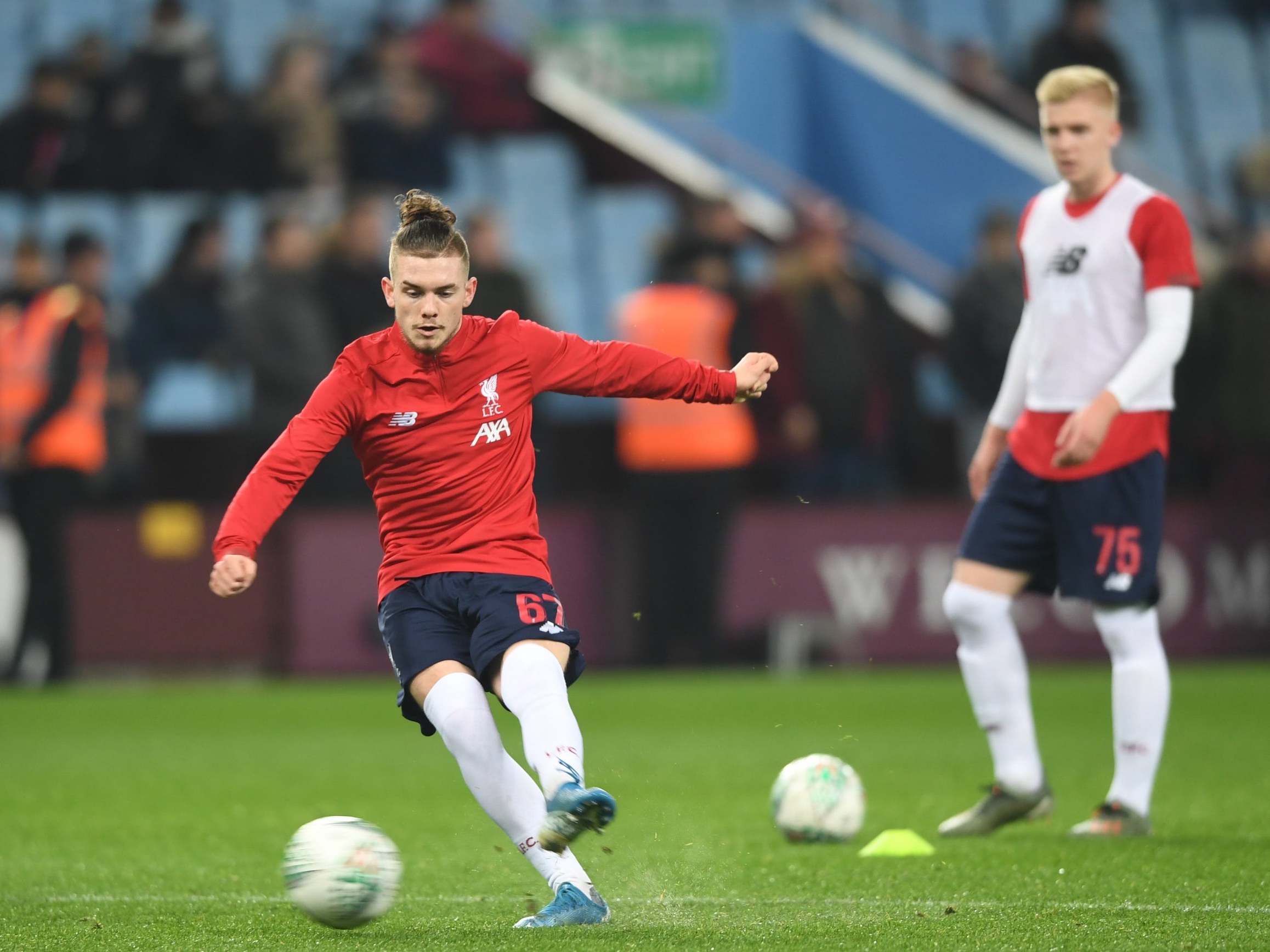 Follow the latest updates live from the Carabao Cup quarter-final between Aston Villa and Liverpool as the two Premier League sides battle it out for a place in the last four.

Liverpool are not only without their entire first-team squad for the match but also manager Jurgen Klopp, with the senior side in Qatar for the Fifa Club World Cup where they are in action on Wednesday. As a result, Under-23’s coach Neil Critchley will take charge of the quarter-final side that will feature the youngest team selected in Liverpool’s history.

Villa boss Dean Smith has no such issues, but with an important match against relegation candidates Southampton to prepare for on Saturday, he has made changes to his side. Follow the live updates below.

1 min: ASTON VILLA KICK-OFF TO GET THE QUARTER FINAL UNDERWAY!


Led out by James Chester and Pedro Chirivella, here come the teams to a close-to-full Villa Park!

In Liverpool-related news, Flamengo have managed to fight back from behind to beat Al-Hilal 3-1 and reach the Club World Cup final. Should Klopp’s side defeat Monterrey tomorrow evening, it will be a showdown against the South American champions that awaits them in Sunday’s final.

But tonight it’s all about the Carabao Cup and the academy stars as they try to put Liverpool through to yet another semi-final. How will Villa live up to their tags as favourites, and will they be able to cope with the expectation that they should comfortably beat what is essentially a youth team? We’re not far from finding out.

Liverpool manager Neil Critchley on if he feels like Jurgen Klopp for the day:

“Jurgen will be watching in Qatar tonight.”

Another unusual aspect of this team selection from Liverpool is that the shirt numbers are extraordinarily high, with the numbers in the academy starting at 60 – with the highest going to forward Tom Hill and his No 99.

A penny for your thoughts, Harvey?

Sixteen-year-old Harvey Elliot familiarises himself with Villa Park ahead of kick-off – which is half an hour away.

It’s certainly one of the most unfamiliar Liverpool sides we’ve ever seen, but what a chance to shine on a big platform this is for the club’s youngsters. Jurgen Klopp will be watching on from Doha with a keen eye on the likes of captain Pedro Chirivella and 16-year-old Harvey Elliot, who signed from Fulham in the summer and has already been touted as one to watch at Anfield.

As promised, Liverpool name their youngest ever starting line-up, with an average age of just 19 years, six months and three days.

Aston Villa are also heavily-changed, though they still do feature first-team players with Douglas Luiz starting and the likes of Jack Grealish and John McGinn on the bench.

Fans are starting to arrive at Villa Park, where it may be dry but it’s close to freezing on what looks set to be a chilly night.

The two teams will be announced in little over 20 minutes – so who should we expect to see in what will be an unrecognisable Liverpool line-up?

The most experienced player set to feature is likely to be Spanish midfielder Pedro Chirivella, who has seven first-team appearances to his name. It was Chirivella who was the reason for the £200,000 fine that the club received when he played while ineligiible in the third round against MK Dons.

A full house is expected at Villa Park tonight for what could prove to be an exciting affair – as long as the weather holds off.

It’s been a terrible day across the country with rain just about everywhere you look, but the forecast suggests there should be a clear night on the cards at Villa Park that should suit how these two sides play.

It provides the perfect reminder that Liverpool cannot take tomorrow’s encounter lightly if they want to secure their first trophy of the season.

Jurgen Klopp may not be keen to discuss the controversy with staging the Club World Cup in Qatar, but that won’t stop us from doing so.

Qatar’s human rights record was a big part in the criticism of handing the 2022 World Cup to the Arab State, as well as for this tournament, but in Liverpool qualifying through their Champions League triumph they can at least fly the flag for outsiders just like they did in 1981, says Tony Evans.

Liverpool could end the week with their second trophy of the year in the shape of the Club World Cup, though first they will need to beat Monterrey on Wednesday to make Sunday’s final.

For James Milner, it is a chance to win another trophy in what has already been a silverware-laden career thanks to his time with Manchester City and Liverpool, and the versatile midfielder hopes to see more success in the near-future.

Looking back towards tonight’s match, Liverpool’s task looks set to be made even harder given the news that talented young striker Rhian Brewster looks set to miss out with injury.

The forward picked up a knock to his ankle in training, and speaking yesterday Under-23’s manager Neil Critchley didn’t sound too hopeful on his selection:

“He’s got a knock so he’s doubtful. We’re assessing him today, fingers crossed he makes it. We’ll see.”

While Liverpool are in action tonight, the bulk of their squad are out in Doha where they are preparing for their Fifa Club World Cup opener against Monterrey.

Jurgen Klopp has been speaking to the media ahead of the clash with the Mexican side, in which he was asked about playing in Qatar amid the pressure on the Arab state for its human rights record.

However. despite speaking out about similar issues in the past, Klopp chose not to delve into the matter in order to concentrate on Wednesday’s match.

“I have an opinion on football but this is a real serious thing to talk about I think and the answers should come from people who know more about it. I have to be influential in football but not in politics. Anything I say wouldn’t help, it would just create another headline, positive or negative.

“I like that you ask the question but I think I am the wrong person. Whoever is organising the competition, wherever it is, they have to think about it. Athletes shouldn’t.

“We represent Liverpool, we are invited so we should go there. If sportsmen have to make a decision about a competition wherever it is in the world that is not right. My personal opinion, I have one of course, is of course I think we should all be treated equally, that is clear.

“But we don’t have the time to judge things when we are here, we only have time for training.”

Welcome to The Independent’s live coverage of tonight’s Carabao Cup quarter-final between Aston Villa and Liverpool, brought to you from Villa Park.

The quarter-final is the first of two games in as many days for Liverpool, with the Fifa Club World Cup kicking off tomorrow in Qatar. As a result, Jurgen Klopp and his senior side have already travelled to the Middle East, leaving Under-23’s manager Neil Critchley to take charge of what is sure to be a youthful side.

It means that Liverpool head into the contest as underdogs despite having not lost a domestic game this season. Kick-off is scheduled for 7:45pm GMT and we’ll have all the build=up and team news for you ahead of the match.

Aston Villa vs Liverpool kicks off at 7:45pm GMT.

Where can I watch it?

The Carabao Cup quarter-final will be shown live on Sky Sports Main Event and Sky Sports Football from 7:30pm.

It can also be streamed online on desktop or mobile devices via the SkyGo app.​

The young Reds are undoubtedly talented but they will have it all to do against what even with wholesale changes will be a vastly more experienced home team. Aston Villa 3-1 Liverpool