The Independent employs reporters around the world to bring you truly independent journalism. To support us, please consider a contribution. Florida police officers responding to a George Floyd protest have been caught on camera laughing and bragging about shooting protesters with rubber bullets. The video shows police forming a line against a group of protesters in 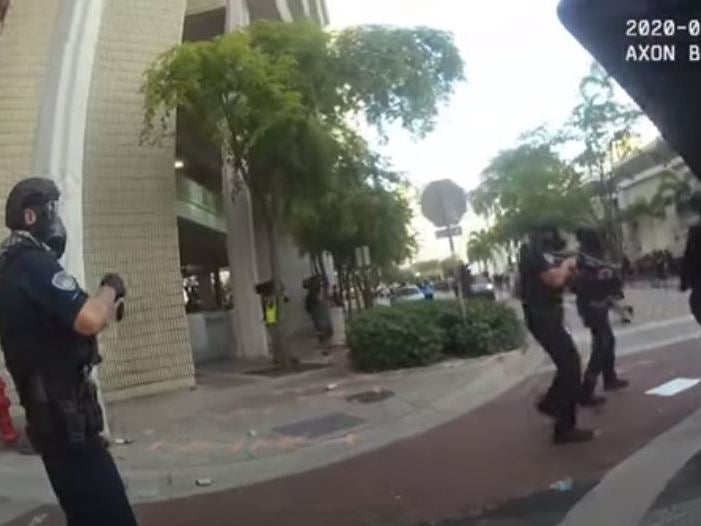 Florida police officers responding to a George Floyd protest have been caught on camera laughing and bragging about shooting protesters with rubber bullets.

The video shows police forming a line against a group of protesters in Fort Lauderdale on 31 May and eventually tossing tear gas to drive them away. When protesters began throwing the cannisters back at the police, they responded by shooting at demonstrators with rubber bullets.

The Miami Herald obtained video footage from an officer’s body camera which showed a detective and an officer bragging about shooting at the protesters.

“Beat it, little f*****,” an officer identified as Detective Zachary Baro says in the video just after shooting a rubber bullet at a protester.

The protester threw a tear gas canister back at the police and was walking away from the police officer when they shot at him.

Later in the video, another officer, identified as Jamie Chatman, approaches Mr Baro and asks if his body camera is off. Mr Baro – incorrectly – says it’s on standby. Once Mr Chatman believes he isn’t being recorded, he begins to brag about shooting the protesters.

One of the demonstrators on the receiving end of the police barrage was LaToya Ratlieff, who was shot in the face and suffered a skull fracture. Speaking with the Associated Press, Ms Ratlieff said she couldn’t eat for a week after sustaining the injury and that she has difficulty seeing out of the injured eye as it is filled with blood.

She has asked to meet with the police department to discuss ways to ensure there is accountability at the department in the future.

In response to the Miami Herald’s story, Fort Lauderdale Police Chief Rick Maglione released a longer version of the body camera video along with a statement to the paper defending the officers.

“Your story shows less than 3 minutes of an 8 minute and 43 second long video. The entire video clearly demonstrates our officers were under attack by a group of people who chose to use violence instead of peace to antagonise the situation. Although the language is extreme, and offensive to some, our officers were dealing with the chaos of a developing situation.

During the video, Mr Maro and Mr Chatman have their conversation behind the police line, minutes after the protesters had been driven away by “less than lethal” rounds and tear gas.

Mr Maglione has not indicated publicly whether the officers in the video are under internal investigation.

The clash between police and demonstrators appeared to kick off after an officer appeared to shove a kneeling woman’s head. In response, demonstrators threw plastic bottles at the police, which prompted the officers to throw tear gas into the crowd.