Follow the latest updates live from the middleweight super-fight between Saul ‘Canelo’ Alvarez and Daniel Jacobs. Both Canelo’s WBA and WBC world titles are on the line, as well as Jacobs’ IBF crown, in a fight that pits two of the best middleweight boxers around against each other. With Canelo currently rated as the best middleweight 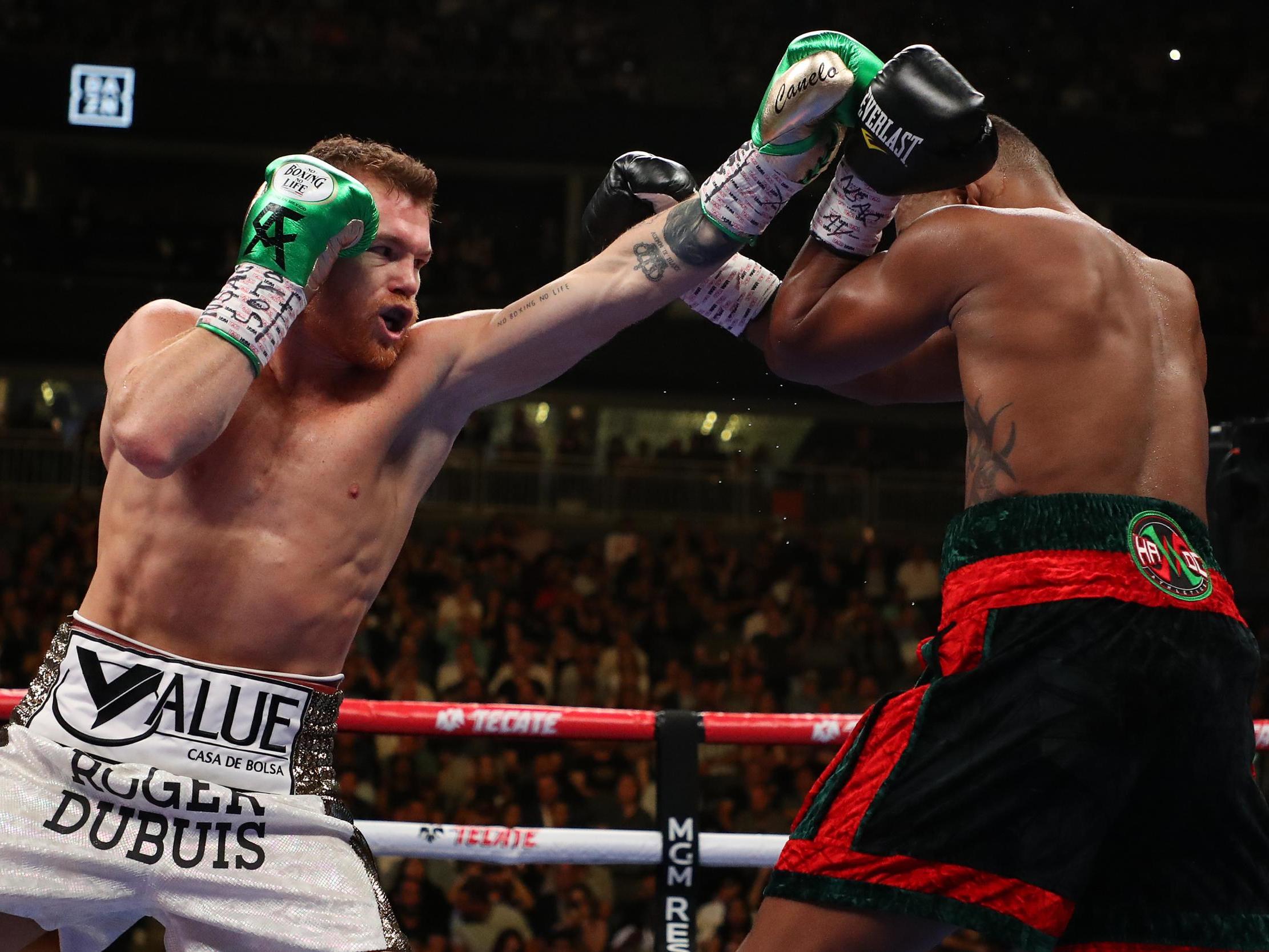 Follow the latest updates live from the middleweight super-fight between Saul ‘Canelo’ Alvarez and Daniel Jacobs.

Both Canelo’s WBA and WBC world titles are on the line, as well as Jacobs’ IBF crown, in a fight that pits two of the best middleweight boxers around against each other. With Canelo currently rated as the best middleweight in the business following his victory over Gennady Golovkin, the opportunity is there for Jacobs to cause a major shock that would be felt throughout the rest of the division.

Jacobs’ story is worthy of its own billing though, having recovered from a rare form of bone cancer in after his diagnosis in 2011 to become a two-time world champion. However, having previously lost to Golovkin, Jacobs will need to deliver the performance of his career in order to defeat Canelo in Las Vegas. Follow the live updates below.

Round 9: The fight is finely poised here as although Canelo is firmly ahead, Jacobs is at least showing more than the opening six rounds. You sense that it’s a case of Jacobs wearing down Canelo, as opposed to Canelo needing just one precise punch on the bitton that should rock Jacobs.

A good left hook catches Jacobs flush, and rocks him momentarily that allows him to follow up with three more. But the punch of the fight so far comes from Jacobs and it’s a huge punch…and Canelo stands and takes it without budging! That was a beauty, and while it won’t take the round, it’s a reminder that Canelo cannot take his foot off the gas.

Round 8: Canelo lands a nice left to the head that stops Jacobs in his tracks, and strangely the IBF champion has gone back to the orthodox stance that he struggled with early on. The success came in the southpaw stance, and while he’s wise to mix it up, this round is all going Canelo’s way.

A sublime move comes from Alvarez as he reads a big hook, and the two start swinging and unleashing everything as they enter the final minute. Canelo goes through the guard and lands at will on Jacobs, and anythng that comes back the other way is about half as powerful.

The best round of the fight so far, and it goes Canelo’s way.

Round 7: The temperature rises in the seventh as again Jacobs catches Canelo on the back of the head, and this time the American apologises. Canelo isn’t impressed, but has to quickly get his head back in the game as Jacobs pins him on the ropes and trys to tee off – to little avail.

Another borderline low one is shrugged off by Canelo, and this time its’t eh Mexican who comes on late with a good left-hook body shot. But the first two minutes were all Jacobs.

Round 6: Into the approach to the halfway stage and the two collide in the centre of the ring when Jacobs goes swinging. He lands once with a nice uppercut, but three misses follow as Canelo reads every single punch to perfection.

At what point will Jacobs run out of ideas? He’s doing a better job this round of staying out of range, and ups the intensity to land late in the round – even if one of them is right on the belt limit. I’m tempted to give that round to the American there.

Round 5: This time there’s a lot of missing from Alvarez, with his head and body movement proving the key difference so far in that Jacobs can’t land either. Much like the Diaz fight earlier in the night, you’re almost waiting for Canelo to hit the gas and go for it.

Jacobs’ second-half surges have waned big time, and they both exchange words on the bell when Canelo accuses Jacobs of catching him in the back of the head again.

Round 4: Canelo is now toying with Jacobs as he lowers his guard and ducks and weaves three straight punches that don’t eeven get close.

Canelo then goes big on the attack, and Jacobs responds with a clips round the back of the head that gets himself a small ticking off. Alvarez responds by trying to punish Jacobs, but catches a jab just to remind himself there is still a danger there.

That said, it’s Canelo’s round.

Round 3: Jacobs starts the round southpaw and wears a big one to the head early on as he gets caught trying to get in and out. Canelo backs Jacobs onto the ropes, before unleashing, and for the first time Jacobs looks in difficulty.

Once again as the round wears on, Jacobs tries to up the pace on his part in an effort to steal the round. Two good body shots from the American land, but there’s also an awful ot missing and Canelo probably did enough to hold onto that.

Round 2: Jacobs definitely has a tactic of trying to avoid Canelo’s right hook by turning his back on the Mexican, but he’s smart enough to work that out over the course of 12 rounds and you wonder how long that wull last. Canelo lands a nice left-jab and is starting to show his superior speed, forcing Jacobs to miss with a couple.

Canelo gets a good body shot into the ribcage and he’s in the ascendancy in the second, before Jacobs fights back and lands on Canelo with a left hook that just sharpens the Mexican up. However, it’s not enough to snatch the round and that’s Canelo levelling it up for me.

The pair both start swinging right on the bell, but there’s no afters there and back they go to the corners.

Round 1: Alvarez immediately takes the centre of the ring, with Jacobs circling in close range clockwise around the rind. As promised, Jacobs has started off with an orthodox stance, but watch out for the switch to southpaw to try and cause problems for Canelo.

Canelo’s first meaningful punch is to the body and he is marching down the taller Jacobs. Canelo does have his left knee wrapped but his moevement looks fine for now, and Jacobs starts to get a few shots in in the second half of the bout before switching to southpaw.

A cagey first round that could pretty much be split at halfway, but I’ll give that one to Jacobs for his late furry at the end of the round.


The opening bell sounds and the fight is underway!


The noise for Canelo is incredibly loud, almost matched by the boos for Jacobs. This is going to be tasty. Here we go…

With two boxing greats inside the ring, who better to introduce them than the legend that is Michael Buffer? Which means you know what comes next…

“Let’s get ready to rumbleeeeeee!”

A huge cheer goes up for Alvarez upon his arrival, the true sign the Cinco de Mayo has arrived. Will it be celebrations tonight for the Mexican and his fans, or will the fireworks be put out for only the second time in his incredible 55-fight career.

Amazingly, that’s an average of a fight every six months if he started boxing from the day he was born…


The lights go out for a second time as Canelo’s face appears on the big screen. The Mexican hero looks to be in the shape of his life as he looks to continue his quest to win all four middleweight titles, and Jacobs is the next step on that journey that he set out to achieve after defeating Gennady Golovkin in that epic double-header.


Jacobs’ drawn-out entrance is greeted with chants of “Canelo! Canelo! Canelo!” from the heavy Mexican contingent inside the Arena. In suitable fashion, his music takes an age to drop – a suitable wait in light of what we had to endure at the start of the night – but finally Miracle Man is making his way to the ring with a small smile on his face.

Possibly the most exaggerated rendition of Star Spangled Banner rings out inside the T-Mobile Arena, before announcing the arrival of the IBF middleweight world champion, Daniel Jacobs.

The ‘Miracle Man’ has overcome much bigger challenges than what he faces tonight, but as the bookies’ underdog, can he turn the tables on its head once again?

You can’t look at world championship boxing and not look at the Las Vegas effect. New York may love a fairy tale, but Vegas loves a fix as Gennady Golovkin found out not once, but twice. But history can also show that there’s hope for Daniel Jacobs, who is no pushover by all accounts.

Jack Rathborn takes a look at the Vegas effect:

So why is Canelo the favourite in a fight between two world champions? As Luke Brown writes, Alvarez is already a pound-for-pound great, a Mexican hero and one of the most experienced and successful boxers in the game – all by the age of just 28 years old.

The drama continued into this morning as Daniel Jacobs missed the 170-pound ‘confidential weigh-in’ limit. Canelo’s team were concerned about how much weight Jacobs would be able to put on between the day of the weigh-in and the fight, and as a resul they had written into the contracts that both fighters could only rise 10 pounds to go up to 170.

When and where is the fight?

The fight takes place at the T-Mobile Arena in Las Vegas, Nevada on Saturday, 4th May. The arena is something of a home for Canelo – and will be even more so considering the bout is on Cinco de Mayo weekend.

What time will the ring walks be?

What TV channel will it be on?

It’ll be live on DAZN as that’s who both fighters are signed with – and in the UK it’ll be shown on Sky Sports, so if you’re a subscriber you get this one as part of your package on Main Event and Action.

What’s at stake and what are their records?

Canelo puts up his WBA (Super), WBC, The Ring and lineal titles, while Jacobs offers his IBF strap. A proper unifying fight.

Canelo’s record is an absurd one, he’s been fighting professionally since the age of 15, and has become the biggest star of the sport. He comes in with a record of 54 fights, 51 wins, two draws and just one defeat to the legendary Floyd Mayweather.

Jacobs, meanwhile, has fought 37 times in his professional career with 35 wins and two defeats.

What is the full fight undercard?

Canelo should win this one. His body punching ability will break Jacobs down and there could be a late stoppage.