Mobile phones have never been better but they all seem to share one basic problem: the battery never lasts as long as the brick-like phones of yesteryear.  Now the founders of ChargedUp, a new London-based start-up, believe they have a solution.  They want to ensure that you never run out of mobile juice while you’re

Mobile phones have never been better but they all seem to share one basic problem: the battery never lasts as long as the brick-like phones of yesteryear.

Now the founders of ChargedUp, a new London-based start-up, believe they have a solution.

They want to ensure that you never run out of mobile juice while you’re out and about by applying the bike-sharing model that popularised Boris Bikes to mobile phone charging.

The company provides charging stations where you can borrow a portable mobile charger, take it with you while your phone charges and then drop it back off at any ChargedUp station when you’ve finished using it. 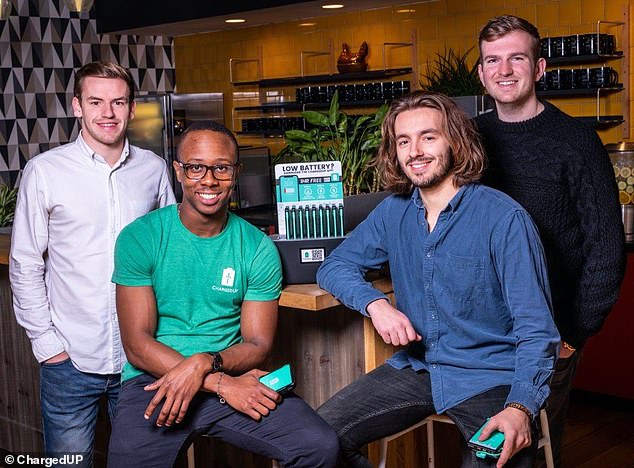 Meet the founders of Charged up: (from left to right) Charlie Baron, Forrest Skerman-Stevenson, Hakeem Buge and Hugo Tilmouth

Prices start from 50p for 30 minutes and are capped at £3 a day and there are already charging stations in over 250 locations across London including bars, restaurants, cafes and offices.

To access a charger, you must first download the ChargedUp app and upload your card details. Then scan the QR code on the station to release the battery, plug in and go.

Hugo Tilmouth, the start-up founder, said: ‘I ask the same question every time I give a business presentation to a focus group, investors or prospective clients: has your phone ever died on you at an inconvenient time?

‘There’s never been a time when I’ve done it and the whole room hasn’t put the hand up because it’s an issue that everyone faces.

‘We’ve created a cheap and environmentally sustainable solution to help solve the problem.’

But the obvious question is: what stops customers from taking the battery pack and failing to return it?

When you sign up to the app, you’re required to upload payment card details. Those who don’t return the portable battery within 10 days are automatically charged £30 – effectively purchasing the device – and are given free access to the ChargedUp network for the whole year. 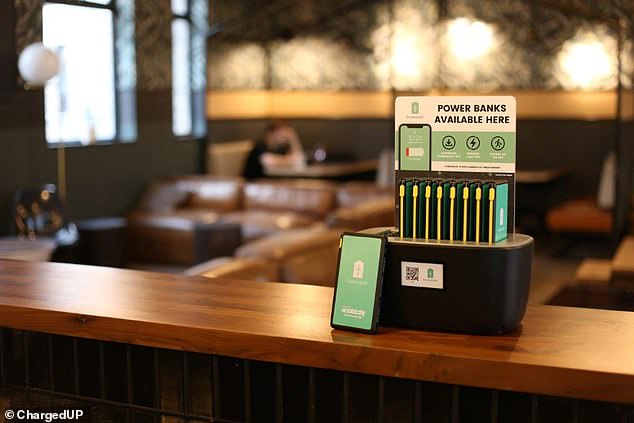 The charging station can be found in over 250 locations across the London including bars, restaurants, cafes and offices spaces

They can charge the battery at home or swap it at one of the firm’s charging stations for another fully charged battery.

Tilmouth said: ‘If you do decide to keep the battery it’s still a really great offer because most power banks are around that price anyway, but we prefer people to keep sharing the batteries as it’s more sustainable.’

Existing customers can buy the battery pack they’re using at any point through the app.

Borne out of frustration

For Tilmouth, his phone’s floundering battery life meant he missed an important phone interview for a job.

He didn’t get the job because he didn’t call back in time, but the experience planted the seed of a business idea that has grown into ChargedUp.

Tilmouth launched the business in 2016 at the age of 21, having studied renewable energy engineering at Exeter University, where he was involved in a project on charging mobile phones using solar energy. 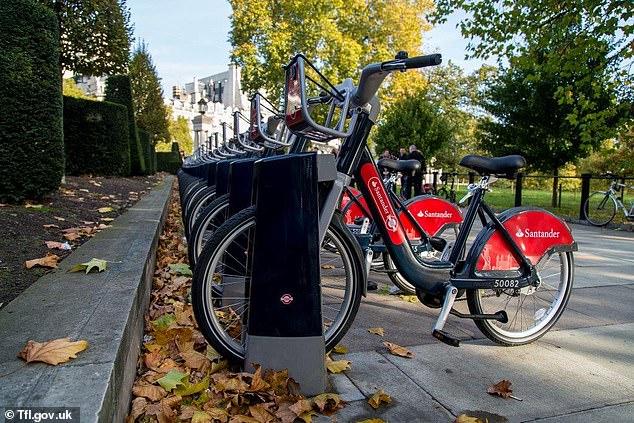 The venture has three other co-founders including Charlie Baron, 24 – who Tilmouth had met during a summer job at a firm which converts people’s footsteps into electrical power – Forrest Skerman-Stevenson, 24,  and Hakeem Buge, 23.

Tilmouth, now 23, admits to bootstrapping to save on costs. He said: ‘I even cycled to business meetings to keep costs as low as possible. I actually sold my bike when money was tight.’

The quartet subsequently raised around £200,000 of funding from a host of sources including a Seed Enterprise Investment Scheme – a popular type of venture capital scheme, business competitions and Exeter University.

Baron said: ‘We are not just an app-based company like a lot of modern start-ups, we had to develop the hardware as well. We spent a year making the batteries after launch.

‘We had 3D printers running all the time, pretty much 24 hours a day developing prototypes and other iterations on design to get the perfect size that it fits well with your phone.’

ChargedUp is not the only business offering a way to charge your phone on the go. ChargeBox provides lockers across a number of locations, allowing you to lock your phone away and charge it.

The founders of ChargedUp initially had a similar idea: they created a solar panel that connected to charging locker.

‘We quickly ditched that idea because it was really irritating having to leave your phone in the locker,’ Tilmouth said.

‘People like battery packs because it allows them surf the web, play a game, look at photos or do whatever they want to do on their phone while their battery is charging.’ 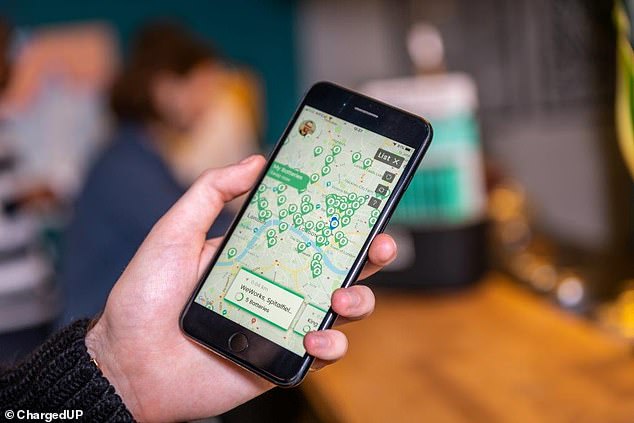 The entire ChargedUp network runs on green energy, made possible by a partnership with renewable energy providers.

The firm manages to maintain its environmentally sustainable credentials by offsetting the amount of energy used on its network through the purchase of an equivalent amount of green energy which they then pump back into the national grid.

Tilmouth reveals plans to expand to 1,000 stations in the capital by the end of 2019.

This ambition was given a boost at the tail end of last year, after the firm struck a deal with retailer Marks & Spencer to trial the charging stations in a number of stores in London.

One of the biggest challenges facing the company is managing demand for the product, according to Tilmouth, who added: ‘A lot of businesses want to get our charging stations in their venues, so we need to concentrate on producing enough to meet the demand.

‘On the other hand, there is also growing demand from people who want to use the battery packs, but our stations aren’t in every venue so we need to grow incredibly quickly in order to keep up with demand.’

Tilmouth refused to confirm how many app downloads the firm has seen or how many customers are using the battery packs currently but suggested it was ‘in the thousands’.

That said, with 250 charging stations available at the moment and 10 battery packs per station, it’s still clearly a business in its early salad days.

The London cycle hire scheme, where users rent a bike to take them from station to station across the capital, began its life in 2013 with 185,000 members.

It has since grown to 363,000 members with the racks of bikes, currently branded in Santander’s ubiquitous red, now a commonplace sight across the city.

Whether ChargedUp will take off to the same extent remains to be seen.