Anna sits on the pavement after a particularly violent day of Hong Kong protests, recounting how she narrowly escaped arrest last Sunday after riot police surprised a large group of protesters occupying a major road of the government district. After dozens of rounds of teargas were fired from behind police lines, tactical police known as 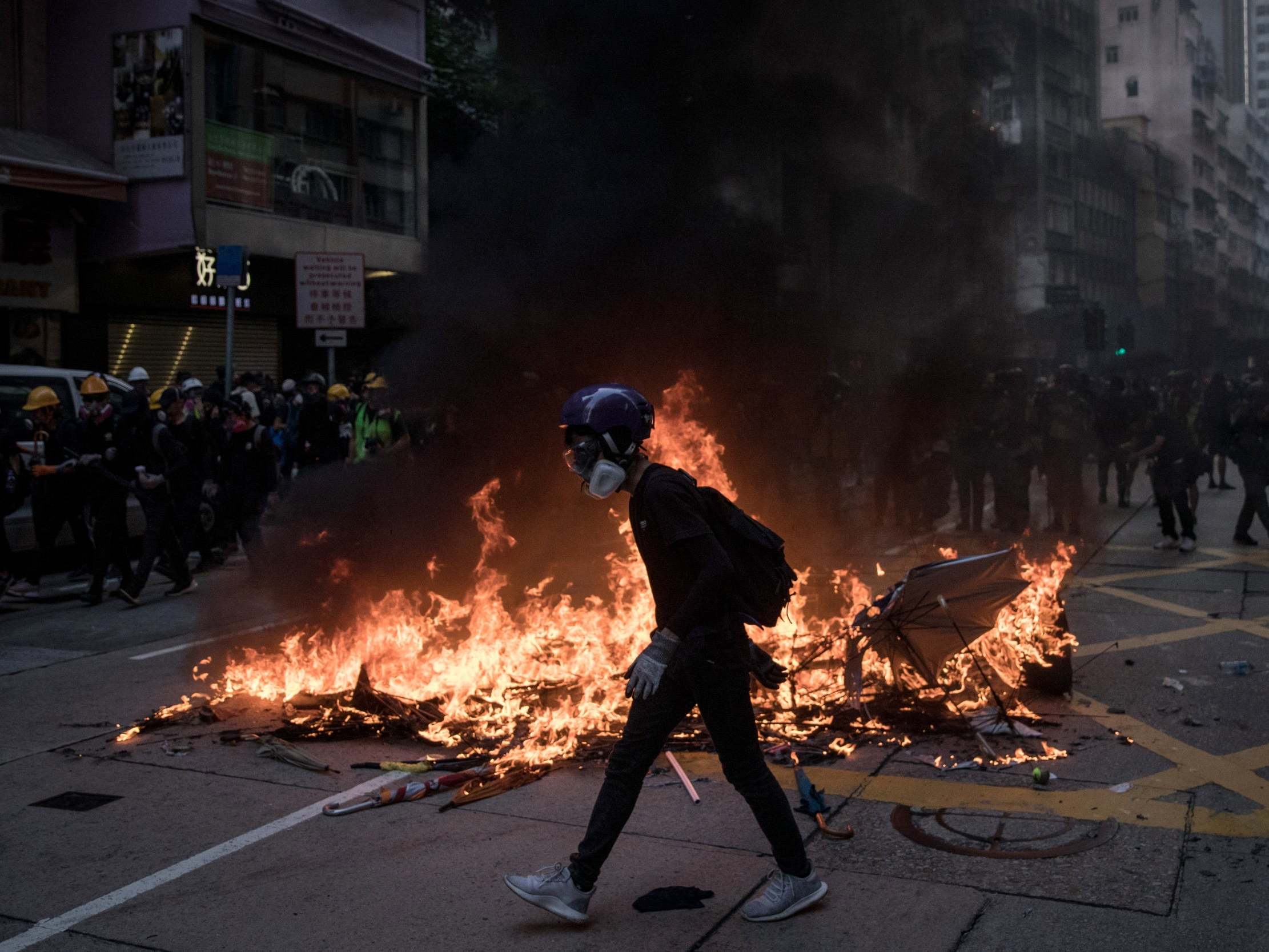 Anna sits on the pavement after a particularly violent day of Hong Kong protests, recounting how she narrowly escaped arrest last Sunday after riot police surprised a large group of protesters occupying a major road of the government district.

After dozens of rounds of teargas were fired from behind police lines, tactical police known as “raptors” suddenly charged from the side, hitting protesters with batons and tackling dozens into submission. It was a particularly violent mass arrest even by Hong Kong standards, where four months of mass anti-government protest have become increasingly turbulent.

“I was there for the teargas and then as everyone started leaving the raptors came in and I just saw black-clad people shoving people to the ground. In the middle of that someone grabbed me by the shoulder and I thought, ‘I’m just going to keep moving. I’m going to keep running,’” she says.

Anna, who has actively participated in protests for the past two years, followed a group of other frontline protesters to safety where they quickly changed from the all-black uniform of Hong Kong protesters into street clothes and tried to look like a “foreigner walking around”.

The twenty-something Swede is one of a handful of foreigners of European descent, a group still deeply privileged in the former British colony, who participates on the front line of conflicts between police and protesters.

Despite Hong Kong’s large international and multicultural population, the movement has remained a largely Chinese and local affair with foreigners like Anna participating intermittently, although their presence has been largely welcomed.

Many foreign residents participated in the early days of the protest movement in June, as a legislative bill that would have allowed for residents to stand trial in mainland China set off a wave of political anger. On record weekends, 1 and 2 million people participated in mass marches, according to organiser figures, while foreign organisations like the American Chamber of Commerce spoke out against the bill.

As the weeks have dragged on and arrests have climbed to 2,000 at unsanctioned protests, visible foreigners have become harder to spot beyond the occasional curious onlooker or tourist.

This might get harder after Hong Kong’s Carrie Lam imposed emergency legislation to ban face masks.

Their presence, however, is not without its complications. Chinese state media has accused the Hong Kong protests of being orchestrated by “black hands” from the US and western Europe, while online notable foreigners have been accused of working for the CIA.

Who or what is western can be hard to pin down in a society like Hong Kong, where many residents have multiple passports or may have spent a considerable amount of time overseas and considered themselves somewhere between Asian and western.

Due to Hong Kong’s colonial background, however, white residents, whether born in the city or outside of it, nevertheless continue to experience disproportionate privilege despite representing less than 1 per cent of the population, according to the 2016 census.

They stand out in particular from other residents born abroad, particularly those from south or southeast Asia, who face systemic discrimination even after living in Hong Kong for decades and learning to speak Cantonese.

Concerns about Hong Kong’s postcolonial baggage may be on the minds of many would-be protesters, but there are more mundane concerns as well such as the fear of drawing the attention of an employer or immigration authorities by simply standing out more easily.

While many foreigners have permanent residency status, similar to a US green card, getting arrested and charged with illegal assembly or rioting is uncharted territory in what has been a largely peaceful city for the past few decades.

Major multinationals, key foreign employers in Hong Kong, have come under increasing pressure to either condemn the violence of the protest movement or signal their loyalty to Beijing, with pressure extending down the line to employees’ public participation and social media posting.

Frontline protesters such as Anna had been difficult to identify, beyond her distinctively Swedish eyes. She wears all black including a cap and mask to disguise herself as she runs into the front lines to extinguish police teargas canisters, and escorts protesters caught up in unexpected chaos away from the front line.

“I’m sure some people disagree with what I’m doing, but as long as you can justify it to yourself and you’ve actually thought about what you’re doing and why, it’s really up to that individual. Just try to do your best to not put other people at risk,” she says.

“I think it’s really up to each person how they want to contribute to the movement but I think if you live here and if you surround yourself with Hong Kong culture, Hong Kong people, do something, even if it’s just telling your friends back home what’s going on. Just do something.”

Anna says she has been welcomed by protesters, particularly when she used to be easier to identify, outside of her full protest gear.

“Earlier when I would just wear a mask, people would approach me and they would be grateful,” she says. “I haven’t had anyone be like, ‘This isn’t your place’ because that is something I was worried about.”

Becca, another 20-something Australian citizen who has spent most of her life in Hong Kong and considers it home, also said she has personal reasons to attend to the protests due to her deep love for the city.

While she does not run through police teargas, she ferries supplies with her car and takes part in the protest movement’s well-established graffiti campaigns, tagging walls and pavements.

“I had a big thick marker pen, I was writing, ‘We’re back’ and ‘ACAB,’” she says, an abbreviation for “All cops are b*****ds” as she stood on a flyover outside Hong Kong offices a day earlier surrounded by thousands of protesters. Police water cannons were nearby and ready to fire, but like many protesters, Becca was wearing long sleeves to protect her skin from the cannons’ abrasive blue dye.

After nearly four months, Becca says that even while other protesters have dropped out she remains motivated to keep going, in part due to a troubling childhood experience with Hong Kong police when she was strip-searched after being accused of stealing from a 7-Eleven shop.

“I just feel like for me it’s not even about how long I’ve been here. This is just about how I feel passionately about the cause and I feel a sense of moral obligation to help. I don’t know if that has anything to do with me being as much of a Hong Konger as I can be without being a local,” she says.

Becca says even locals might choose to stay away due to business ties to China or, conversely, a lack of ties or experiences in the local community. “Maybe if this was the only home that they have they would be forced to really think about what is happening,” she says.

Similar to Anna, she said she is often thanked by protesters for attending the demonstrations. Neither of the women seem concerned about being identified online for their work on the front lines of protests. More visible activists, like the Briton “Hong Kong Hermit”, have often been accused of being a foreign agent for live-streaming the protest movement.

The narrative of foreign intervention has been particularly important with Chinese state media, which has accused the US and western nations of trying to create a “colour” revolution in Hong Kong, which returned to Chinese sovereignty in 1997 after 150 years of British rule.

It has escalated as well, as some protesters have begun to carry flags of the US, UK, Republic of China and the Hong Kong colonial flag in a bid to win international attention, particularly from the US congress, which is mulling the punitive Hong Kong Human Rights and Democracy Act.

Accusations of being a CIA agent, however, have not seemed to faze “Hong Kong Hermit” or another alleged “CIA mole” Sean Tierney, an American university lecturer often seen in the thick of protests over the course of the summer as well as during the city’s 2014 democracy protests.

Tierney’s presence on the front lines, however, has scaled back from activism to helping journalists these days as volunteer security.

“I found that it was best if I’m there to observe things. If I observe something that someone needs to take a picture of but also making sure that while they are looking through their viewfinder I’m the one telling them how far away the police are or I’m saying, ‘All right, come on we have to move,’” Tierney says.

“I could say my presence at protests brings up all kinds of postcolonial weirdness and/or issues of espionage… therefore I shouldn’t go but that would please the government,” he says. “My job is to exercise my right as a resident and I am entitled to those rights under the Basic Law [Hong Kong’s constitution]. I’m not doing anything wrong and if I am I don’t have any qualms about being arrested and being charged,” he says.