By Rebecca Rachmany, ICO whitepapers, distributed leadership Following a second successful event, it’s fair to say that the DGOV Council is gathering momentum, regardless of the ups and downs of the crypto market. DGOV is the unofficial foundation for everything around decentralized governance. The group runs a growing Wiki, a regular newsletter, a lively telegram

Following a second successful event, it’s fair to say that the DGOV Council is gathering momentum, regardless of the ups and downs of the crypto market. DGOV is the unofficial foundation for everything around decentralized governance. The group runs a growing Wiki, a regular newsletter, a lively telegram group, and most recently, a series of gatherings where people engage in deep discussions on all aspects of decentralized governance.

The first Dgov Council was a sold-out affair in Berlin preceding Aracon in January, and the most recent event, DGOV Assembly Paris following EthCC showed the sustainability and popularity of the model. The DGOV events are lightly facilitated, with the facilitators setting up the times for sessions, but the participants self-generating the topics and sessions themselves. Attending the DGOV event is a participatory experience.

What is a DGOV Meeting like?
“The self-organizing aspect kept the group alive,” said Morshed Mannan, PhD researcher, Leiden Law School. “You felt you needed to contribute, and more or less, everyone did.” In the DGOV events, there is no differentiation between the audience and the presenter. Talks are done in roundtable fashion, and though the person who proposes the discussion is the moderator, as often as not, the moderator speaks less than the other participants.

“Expertise isn’t limited to people who have some certain title, who have raised money, or who are popular on the speaking circuit,” said organizer Max Semenchuk. “We do have an application process, but mostly it’s based on interest and contribution to the community. The discussion format allows us to go deeper. At this point, we feel that we are developing a body of knowledge. We aren’t at a point where we can even agree on what decentralized governance is, so how can we say who is an expert? We are co-creating a body of knowledge, so this format is most appropriate for our gatherings.”

In fact, the Paris DGOV Assembly was a spontaneous result of the Berlin DGOV Council. One of the members proposed the Paris Assembly, several people said they would participate in the organization, and voila… a decision was made and immediately executed in the spirit of self-governance.

(Image From This is how we will become a Stateless Global Society, Toni Lane https://medium.com/@tonilanec/528d08408b94)

Review from DGOV Paris
The day started with a number of lightning talks, including a highlight by Toni Lane of the Blockchain Commons on alternatives to voting systems. “The question we are addressing is: How do we shift the current justice system from the binary incentives of good/bad right /wrong and into a more human understanding of life of itself.” Lane presented a model for decision-making independent of government, for a more just system. She challenged the idea that a governing group should be able to make decisions on ethical and legal behaviour for everyone in a particular geography.

The Blockchain Commons is setting out to provide a framework where anyone can find the appropriate legal jurisdiction for their activities, as long as they do not harm others. “If you live in Uganda and your government is ready to arrest you for being gay, how do you register a marriage contract that will render your rights in a way that will be valid?” With today’s technology, this is feasible, so the only question is how to create the legal frameworks that protect people worldwide.

Another one of the pivotal discussions was with Mannan, who gathered a group around the topic of the history of decentralization and the lessons this may hold for the future of decentralised governance.

Mannan led with the example of the Socialist Federal Republic of Yugoslavia in the 1950-1980 period, which tried to introduce a decentralized, self-managed governance system as an alternative to capitalism, social democracy and Stalinism. He explained how the system cultivated a strong ethos around individual duties towards society and citizens creating their own emancipation. The language, he noted, is similar to the language used in the blockchain industry.

The discussion also covered the use and misuse of the terminology “decentralization”. Decentralization is often used by centralized organizations, such as large corporations, or even the IMF and the World Bank. These kinds of organizations look towards the peripheries of their network to, for instance, distribute funds and enter into agreements, but in the end, the funding and control still cascades down from a centralized organization. Some decision-making happens at the edges, but the central organization holds effective power.

The group also looked at different jurisdictions and frameworks for cooperatives, an organisational form that has its own practices for implementing self-management. “The cooperative form has been around for more than a 150 years and has more than a billion members. It’s a promising organizational form to look at, from a historical perspective, a governance angle and for more fundamental issues of trust of the state or the market,” noted Morshed, mentioning that in some jurisdictions it is possible to introduce different voting systems into bylaws, allowing more complex mechanisms than one-person-one-vote.

Where could that fishy be?
As with the Berlin gathering, the Paris DGOV event concluded with a “Fishbowl” where people sit in a circle, with 4 chairs in the middle, and participants take turns in the middle chairs. The conversation allows everyone to make concluding remarks about their takeaways, completing the event in a collaborative way.

The organization is looking at creating a retreat in April in Slovenia, as well as creating a larger conference in Greece over the summer.

The time limitations on each session helped keep the pace going well, noted several of the participants. “While everyone felt there was time to share their thoughts, there was some level of frustration that we weren’t able to go as deep into each topic in one day,” noted Marina Markezic, one of the participants from the blockchain community in Slovenia. She also noted that the conversation continues on the DGOV telegram group, forums and DAOtalk channels, so people do have the opportunity to go deeper within the community.

To find out more about the DGOV organization, check out their site at https://dgov.foundation/ 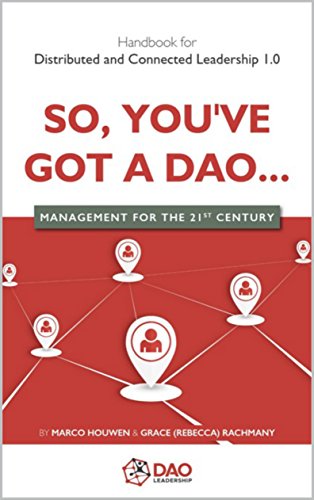