Democrats publish resolution on next stage of impeachment investigation

BREAKING NEWS: Nancy Pelosi reveals plan for next stage of Donald Trump impeachment probe with televised hearings and a lawyer for the president – but Republicans cry foul as Democrats get to VETO their witnesses

House Democrats and Speaker Nancy Pelosi released their impeachment resolution on Tuesday that outlines the next stage of the investigation into Donald Trump, which includes public hearings, and gives Republicans the power to call witnesses.

Lacking from the eight-page document is a timeline for when the process will move to each step and when it expects to be concluded.

Under the resolution, power in concentrated in the hands of House Intelligence committee Chair Adam Schiff, who can authorize longer periods to question witnesses and who can approve Republican requests for witnesses to appear. 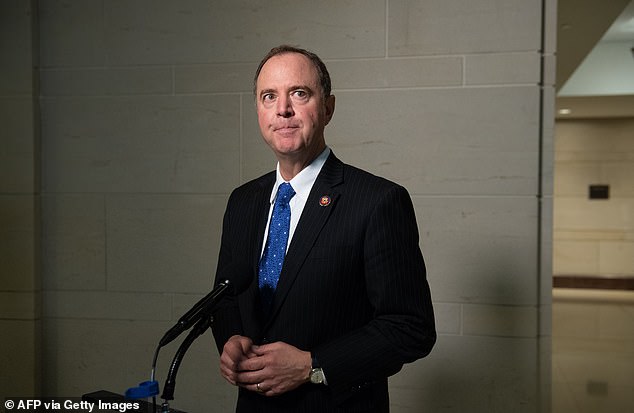 The resolution is slated for a vote on Thursday in the full House.

The resolution directs a series of House committees ‘to continue their ongoing investigations as part of the existing House of Representatives inquiry into whether sufficient grounds exist for the House of Representatives to exercise its Constitutional power to impeach Donald John Trump, President of the United States of America, and for other purposes.’

The House Intelligence panel is given the lead in the probe and directed to write a public report – with classified information redacted – when it finishes its investigation.

The matter then moves to the House Judiciary Committee, whose staff, led by Chairman Jerry Nadler, will draw up the articles of impeachment.

The resolution also allows for Trump to make his case before lawmakers.

‘The House authorizes the Committee on the Judiciary to conduct proceedings relating to the impeachment inquiry referenced in the first section of this resolution pursuant to the procedures submitted for printing in the Congressional Record by the chair of the Committee on Rules, including such procedures as to allow for the participation of the President and his counsel,’ it reads.

The House intelligence committee will be joined by the House Financial Services,  Foreign Affairs, Judiciary, Oversight and Reform, and Ways and Means committees in the inquiry.

Republicans and President Trump have assailed the impeachment process and called for a full vote in the House.

“The House impeachment inquiry has collected extensive evidence and testimony, and soon the American people will hear from witnesses in an open setting. The resolution introduced today in the House Rules Committee will provide that pathway forward,’ Schiff and his fellow committee chairs Eliot Engel, Carolyn Maloney and Jerry Nadler said in a statement.

“The resolution provides rules for the format of open hearings in the House Intelligence Committee, including staff-led questioning of witnesses, and it authorizes the public release of deposition transcripts.

“The evidence we have already collected paints the picture of a President who abused his power by using multiple levers of government to press a foreign country to interfere in the 2020 election. Following in the footsteps of previous impeachment inquiries, the next phase will move from closed depositions to open hearings where the American people will learn firsthand about the President’s misconduct.”