In times of uncertainty, can we find solace in the shape of water?

If there’s one thing guaranteed to mess with anyone’s sense of wellbeing it’s uncertainty. And it seems to me that these are especially uncertain times. As I walked over Battersea Bridge yesterday morning, with a head full of worry about things I can’t control – that bloody B-word, for a start – I saw that the 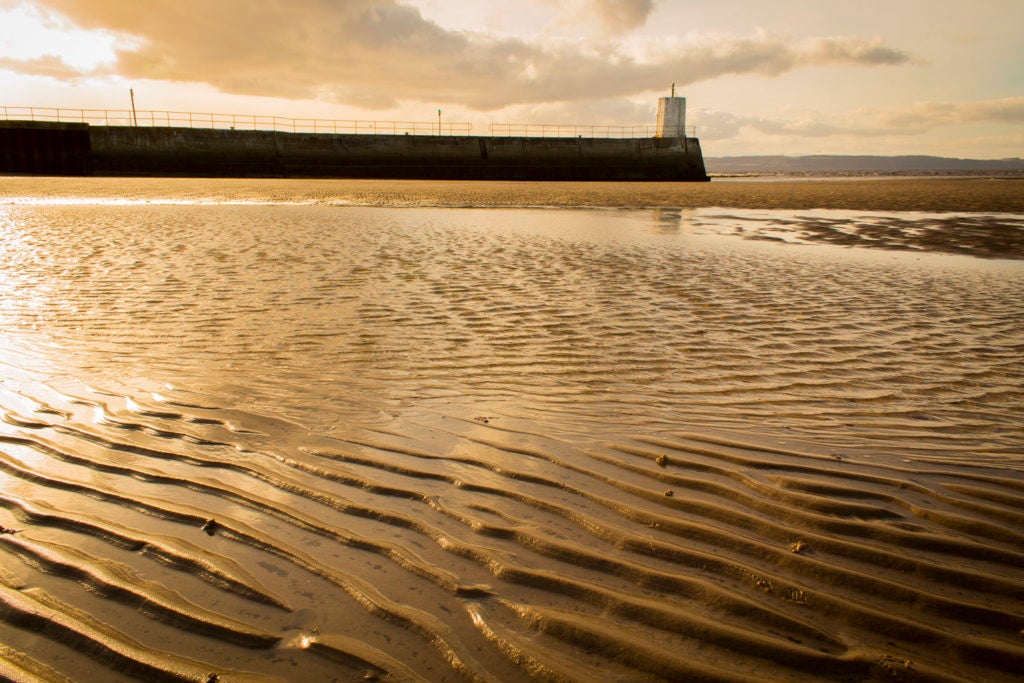 If there’s one thing guaranteed to mess with anyone’s sense of wellbeing it’s uncertainty. And it seems to me that these are especially uncertain times. As I walked over Battersea Bridge yesterday morning, with a head full of worry about things I can’t control – that bloody B-word, for a start – I saw that the tide was in. The sun was out in a cloudless sky and for a moment the water of the Thames reflecting the lemon light of the early day looked unlike I’d ever seen it before. It wasn’t the “dirty old river” of The Kinks’ “Waterloo Sunset”. It was like the ocean over sand on a beach in west Wales or Cornwall. I could see the sea in the river’s face.

I’ll find any excuse to be by the sea. As is the case for many people, the seashore is my happy place. I don’t care whether I’m standing on sand or shingle so long as I can look out on to water. A calm sea glittering in the sunshine is best, but childhood summer holidays spent in Sussex and Cornwall instilled in me a belief that the sea is just as good on a grey day.

The idea of holidaying by the sea began with the Romans. They imported the fashion when they invaded Britain, establishing Mersea Island in Essex as a weekend getaway for the Roman residents of Colchester. For the upper classes, seaside resorts became fashionable in the 18th century as an alternative to visiting spa towns like Bath. However, it wasn’t until the 19th century that British beach resorts really took off, when the rise of the train made the coast accessible to all.

A few days by the sea was already a popular prescription for all sorts of maladies. As Jane Austen wrote in her unfinished novel Sanditon, about a fishing village that becomes a popular resort, “The sea air and sea bathing together were nearly infallible, one or the other of them being a match for every disorder of the stomach, the lungs or the blood. They were anti-spasmodic, anti-pulmonary, anti-septic, anti-bilious and anti-rheumatic. Nobody could catch cold by the sea; nobody wanted appetite by the sea; nobody wanted spirits; nobody wanted strength.”

In the 18th century, it was still widely believed that childhood fits could be cured by strapping a live pigeon to the child’s bottom. Or that eye infections could be solved by the application of ear wax. The physicians of Austen’s day had some very strange ideas but when it came to the curative effects of the sea, they were spot on.

In 2012, a study by Exeter University found that people who live near the sea are much more likely to describe themselves as being in good health compared to those who live further inland. It might be that living near the sea encourages people to get out more and be more physically active. Certainly, swimming in sea water is good for the heart and the skin. But you don’t even need to paddle to get the benefits.

The high moisture levels in sea air may help those who suffer from asthma (which has to be better than the 18th-century asthma cure of a fortnight on boiled carrots). Meanwhile, the high levels of salt in sea air have been shown in some studies to aid lung function in people with cystic fibrosis. Then there are the mental health benefits that come from just listening to the soothing sound of the waves.

On the website of Mind, the mental health charity, Anna describes how moving to Southend-on-Sea has improved her wellbeing. “What is it about the water? I think it’s a combination of things. The seafront is a shared space for everybody and I love to people watch down there – it helps lift my spirits. There’s always something to see: the sun setting; a group of paddle boarders enjoying an evening out on a calm tide; ships moving in and out from the Thames making me wonder about the long journey ahead or behind them. It helps me leave my busy life behind and get lost in my own thoughts as I stare across the estuary.”

Even virtual access to the sea can have an effect. At Exeter University’s European Centre for Environment and Human Health, BlueHealth 2020 (an EU-funded research project) has been looking into the benefits of bringing the big blue into such sterile environments as dental surgeries and residential homes via virtual reality. It’s been using virtual-reality headsets with beach scenes to see if they reduce pain perception in dental patients.

Previous studies have had promising results, finding that subjects’ moods improved more when they were shown images of a “blue” environment – such as a seascape – over an urban environment, or even a “green” environment such as a forest.

Dr Mathew White of the ECEHH suggested: “What we’re finding, if anything, is a lot less activity in the brain when the sea is being shown [compared to green spaces], which tells us that it’s possibly less stressful and more familiar to the core human being.”

As wellness strategies go, simply being near water is a great one. There’s hardly anywhere in the UK that isn’t within a short distance of a lake, a river or the coast. Access to the sea is free to all. The English Channel is as beautiful as the Mediterranean. Indeed there are days when it’s as inviting as the Caribbean.

Karen Blixen wrote, “The cure for anything is salt water: sweat, tears or the sea.”

I’ve felt water work its magic on small stresses and big sadness. A walk along the seafront at Hastings one recent Saturday afternoon – when deadlines and red lines were coming at me with the regularity of train-track sleepers – was like a week’s holiday.

Three years ago, Dad and I took our final walk together by the sea. I think I knew at the time that it would be the last time. I savour the memory of standing on the beach with him, looking out towards the Isle of Wight. It was a perfect evening. The sea was calm and dotted with sailing boats. After Dad died, the sea’s permanence was a comfort as I headed to the coast to escape the stresses that came in the aftermath of his death.

I could find no excuse to be at the seaside yesterday morning, but having stopped to look at the Thames for as long as I was able, I continued on my way feeling a little less frazzled than before.

Standing by the sea or even a tidal river like the Thames is a great way to remind yourself that all things are cyclical. The Earth still turns. The Sun still rises. The tides go in and out. This was the truth long before we got here and will be the truth long after we’ve gone. There’s something deeply comforting about that.