The once bustling streets of the vibrant French Quarter in New Orleans remain empty but for restaurant workers and a few lonely musicians as Louisiana moves past the projected peak of its coronavirus outbreak with one of the highest fatality rates in the country. Deaths in Orleans parish, which encompasses the city, hit 224 on

The once bustling streets of the vibrant French Quarter in New Orleans remain empty but for restaurant workers and a few lonely musicians as Louisiana moves past the projected peak of its coronavirus outbreak with one of the highest fatality rates in the country.

Deaths in Orleans parish, which encompasses the city, hit 224 on Thursday, a jump of 16 new deaths since Wednesday. The city has 5,242 cases.

There is a wide gulf between the deaths in New Orleans and the epicenter of New York City, where 4,778 have died, but the Big Easy has a fatality rate from the coronavirus that is far above the Big Apple.

Photographs taken on Wednesday, April 8, show a city quietened a day after the state reached the projected peak of its outbreak deaths, which was expected to hit on Tuesday.

It marks a striking departure from the bustling streets and raucous parties seen just weeks before as Mardi Gras was celebrated, an event which has since been blamed for the rapid and fatal coronavirus spread in the area. 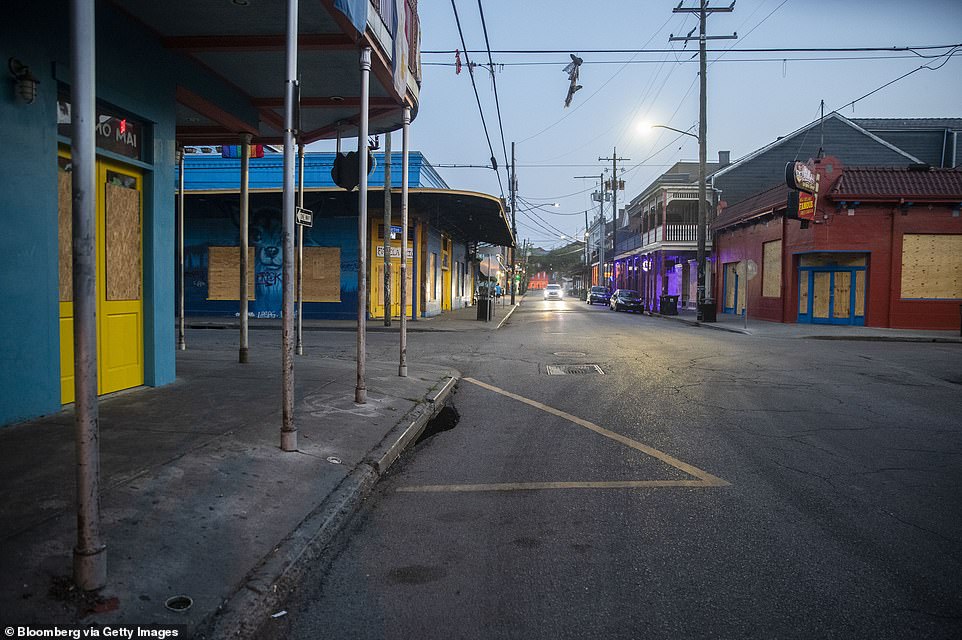 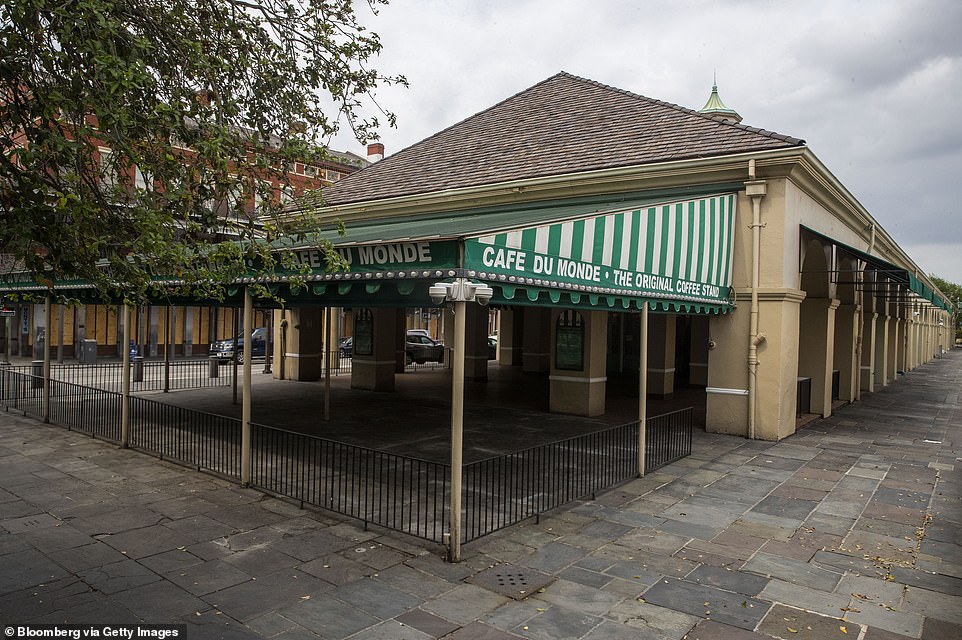 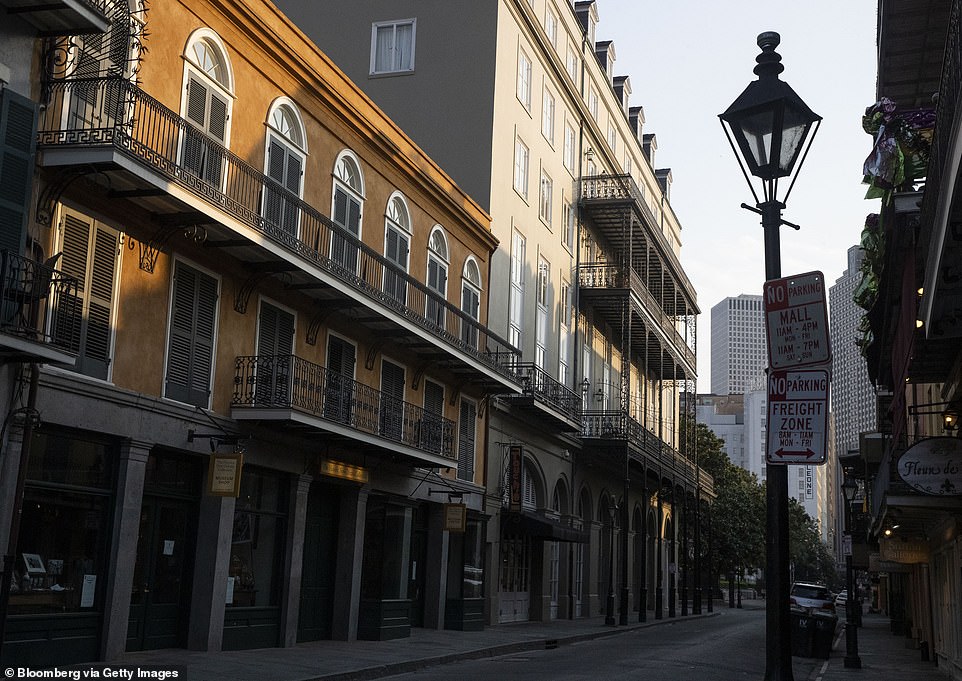 Royal Street is seen empty in New Orleans as the outbreak in the city appears to lag while towns further up the river begin to suffer from high death tolls. The Big Easy has one of the highest coronavirus fatality rates in the United States 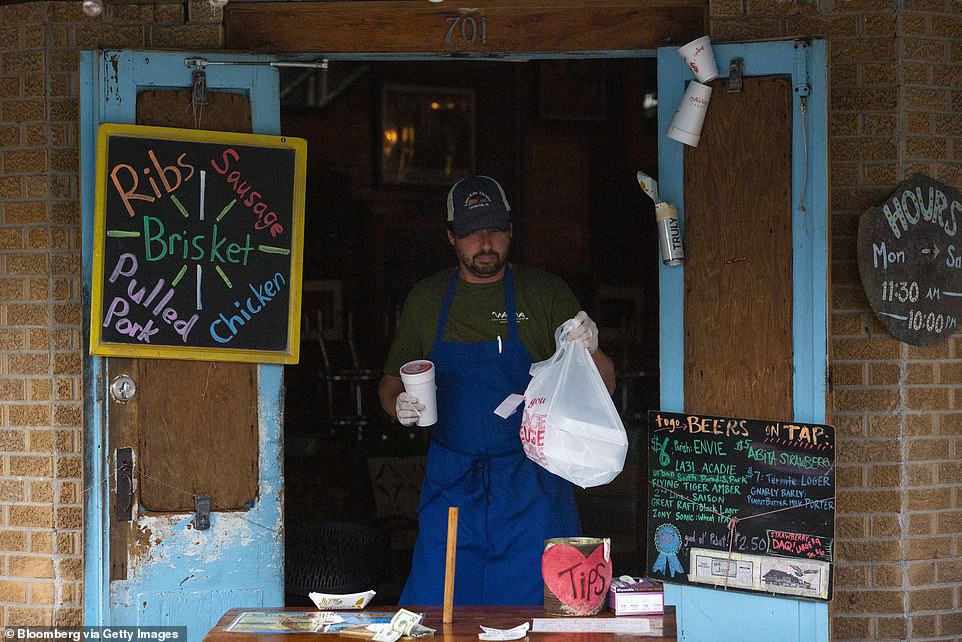 A worker wearing protective gloves gives food to a customer at a makeshift pickup window at the Joint BBQ restaurant in New Orleans. The city has been under an order to shelter in place since late March as once of the country’s hotspots 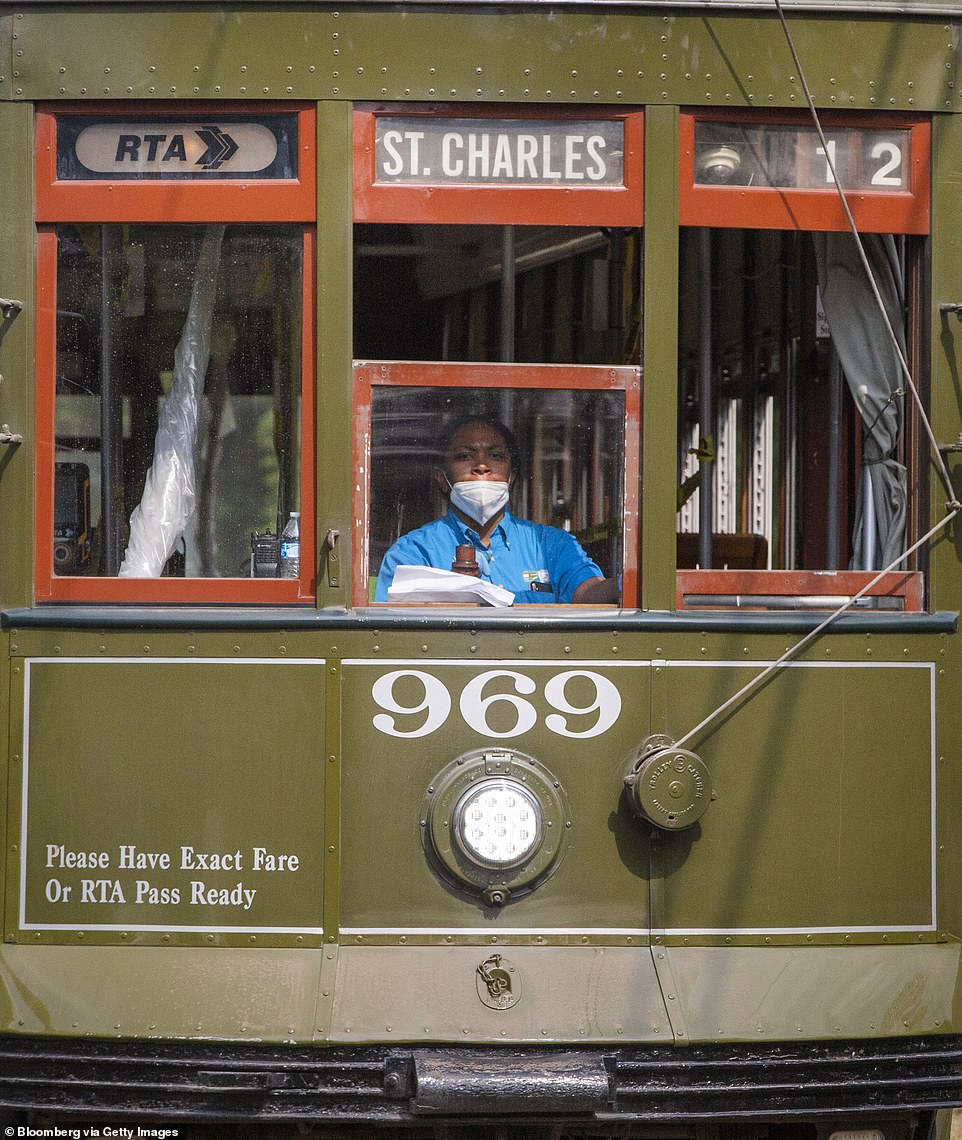 A driver wearing a protective mask operates a streetcar traveling down St. Charles Avenue in New Orleans. The city is empty but for essential workers and a few lone musicians as it comes to terms with the large coronavirus death toll 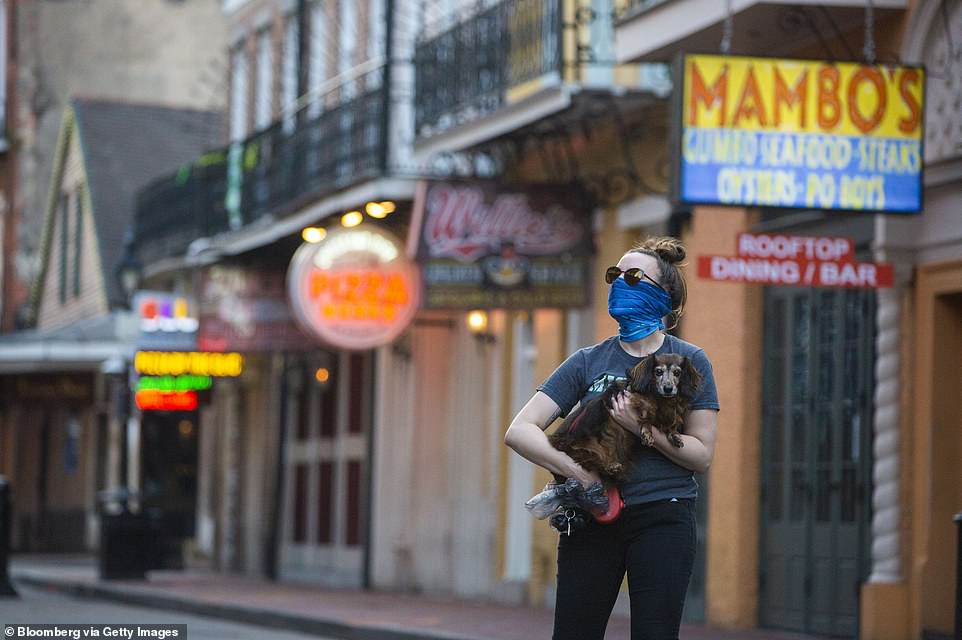 A person wears a protective mask while carrying a dog on Bourbon Street in New Orleans. Louisiana’s death toll is at 702

Lone figures walking their dogs or essential workers on their way to work are the only people seen on the city’s streets as its battles to come to terms with the gigantic loss of life in recent days.

The state is now hoped to be through the worst of the outbreak with less deaths on Thursday but officials have warned that social distancing must be maintained to ensure that there is not a further wave of infections.

New Orleans has one of the highest coronavirus fatality rates in the nation with 5,242 cases and 224 deaths as of Thursday.

Orleans Parish, which encompasses New Orleans, has a rate of 57.5 coronavirus deaths per 100,000 people. The fatality rate is 4.27 percent.

‘We already had tremendous healthcare disparities before this pandemic – one can only imagine they are being amplified now.’ 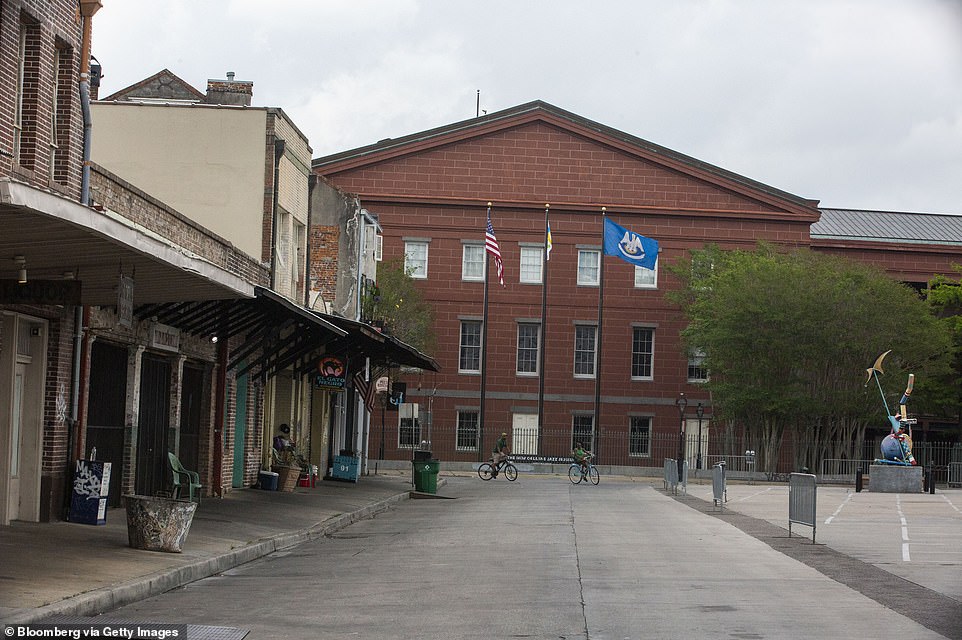 People ride bicycles through the French Quarter neighborhood of New Orleans. The area remained abandoned on Wednesday as the state reached what is projected to be the peak of its coronavirus deaths 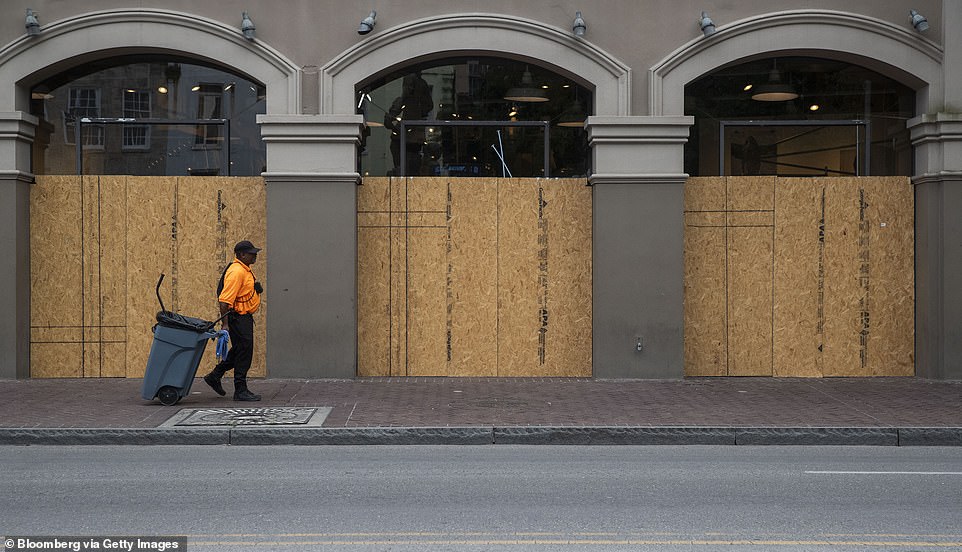 A worker walks past a boarded up store in New Orleans. Louisiana Gov. John Bel Edwards has warned that social distancing guidelines must be followed over Easter weekend despite a dip in new deaths and cases in the state 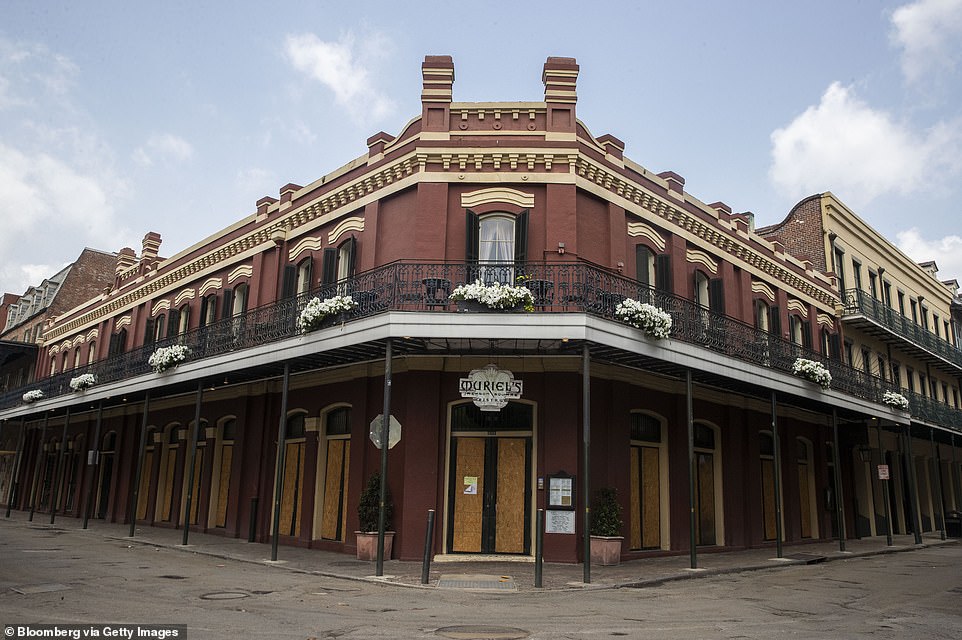 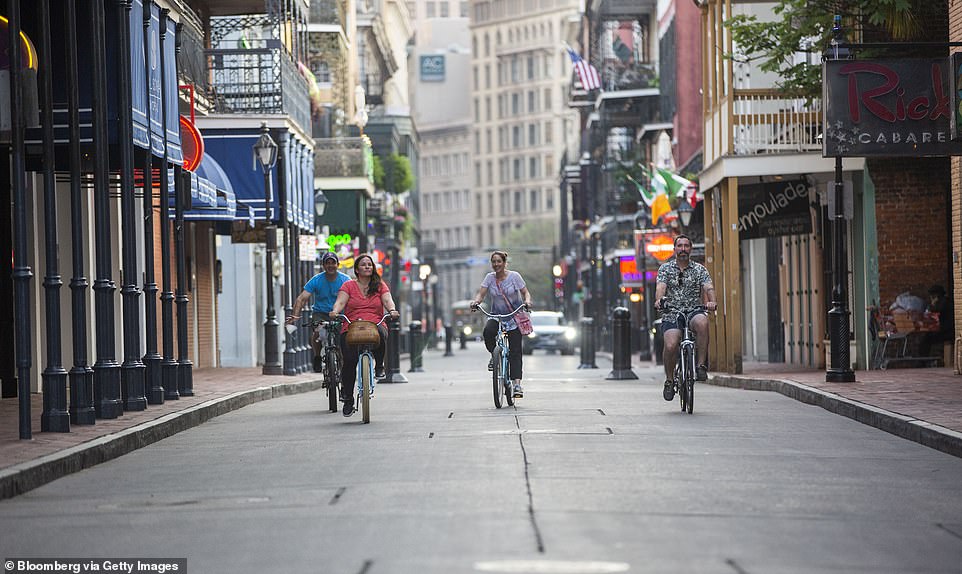 People ride bicycles along a nearly empty Bourbon Street in New Orleans. The city has a fatality rate of 4.27 percent as another 16 people lost their lives to coronavirus on Thursday, bringing the death toll to 224 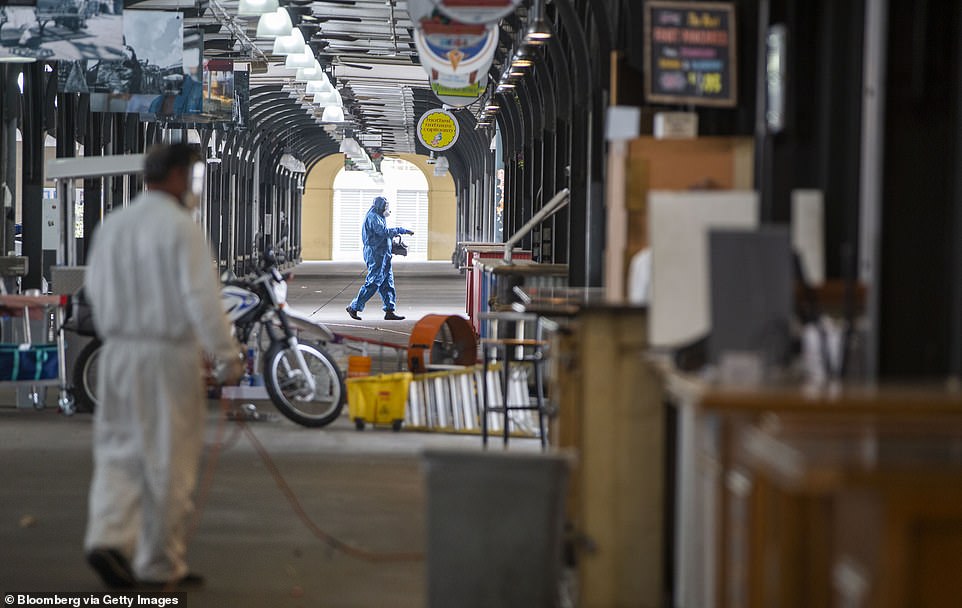 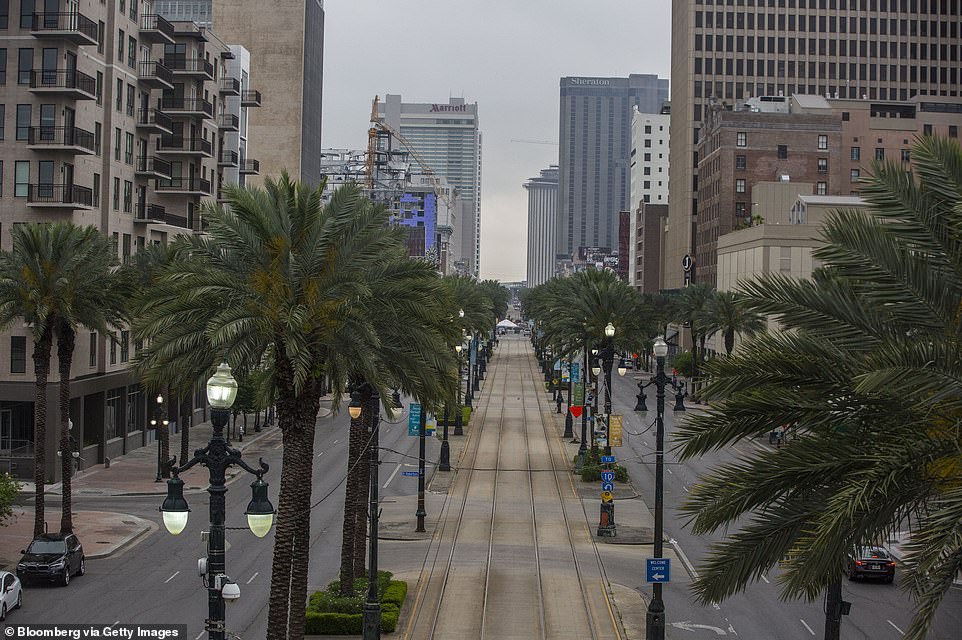 Canal Street stands empty during rush hour in New Orleans, where there are more than 5,200 cases of coronavirus as of Thursday

In New Orleans, 39 percent of residents have high blood pressure, 36 percent suffer from obesity and 15 percent have diabetes , according to research.

A host of other factors could contribute to New Orleans’ high death rate from COVID-19, ranging from access to healthcare and hospital quality, to the prevalence of other conditions, including lung disease, health officials say.

They have also warned that it could be a harbinger for the potential toll the pandemic could take in other parts of the South and Midwest that also have high rates of obesity, diabetes, and hypertension.

As the crisis in New Orleans appears to lessen, the outbreak looks to have moved upstream with St. John Parish on Wednesday reporting the highest per capita death rate in the country with 81 deaths per 100,000 residents. 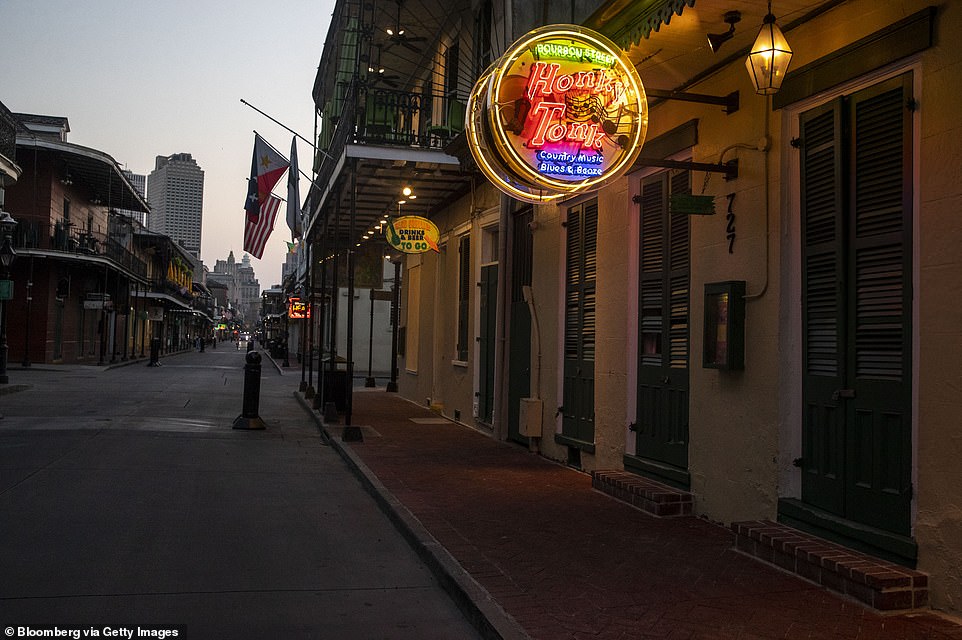 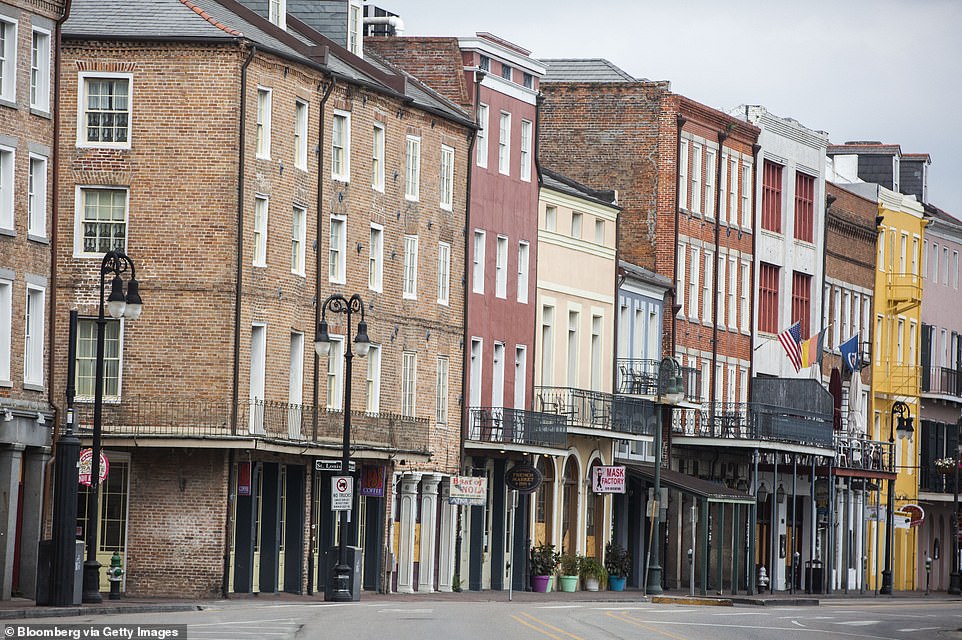 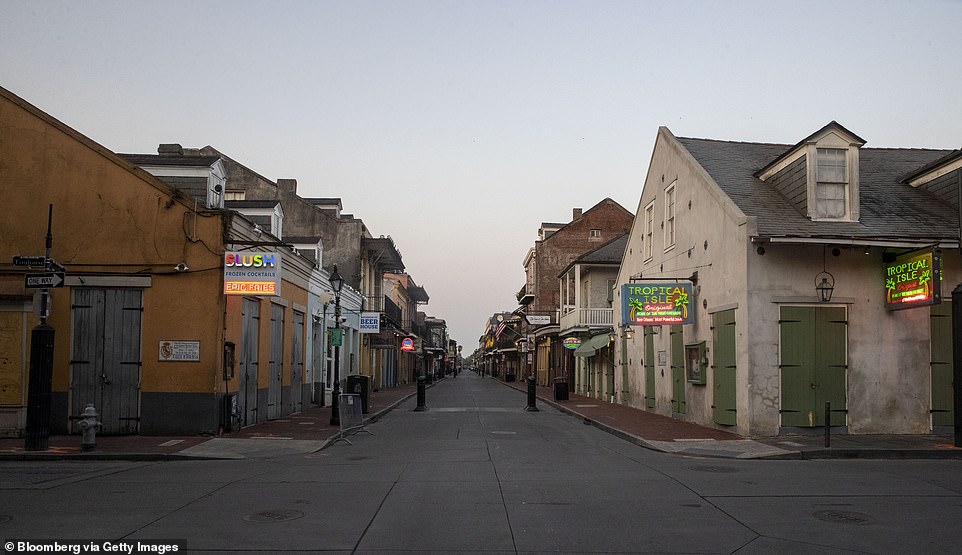 The quiet streets are in stark contrast to the packed crowds just a few weeks ago when Mardi Gras was celebrated.

Louisiana Governor John Bel Edwards has claimed he had no idea that the celebration would trigger a coronavirus outbreak despite receiving a briefing on the pandemic weeks beforehand.

Although concerns over coronavirus and its ramifications didn’t manifest until March in the U.S., U.S. governors were briefed February 9 at the National Governors Association Winter Meeting by members of Donald Trump‘s coronavirus task force on the growing threat of the respiratory virus.

Despite this, many states did not immediately react and resumed business as normal, including New Orleans going forward with Mardi Gras celebrations and parades.

Mardi Gras was celebrated February 25 with the traditional parade down Bourbon Street, which usually takes about 2.5 hours and is attended by thousands of people from all over the country – and even many international travelers.

The celebrations across the state, and specifically in New Orleans, sparked a major outbreak in Louisiana, leading it to become the fourth deadliest state in the nation with 702 deaths as of Thursday. 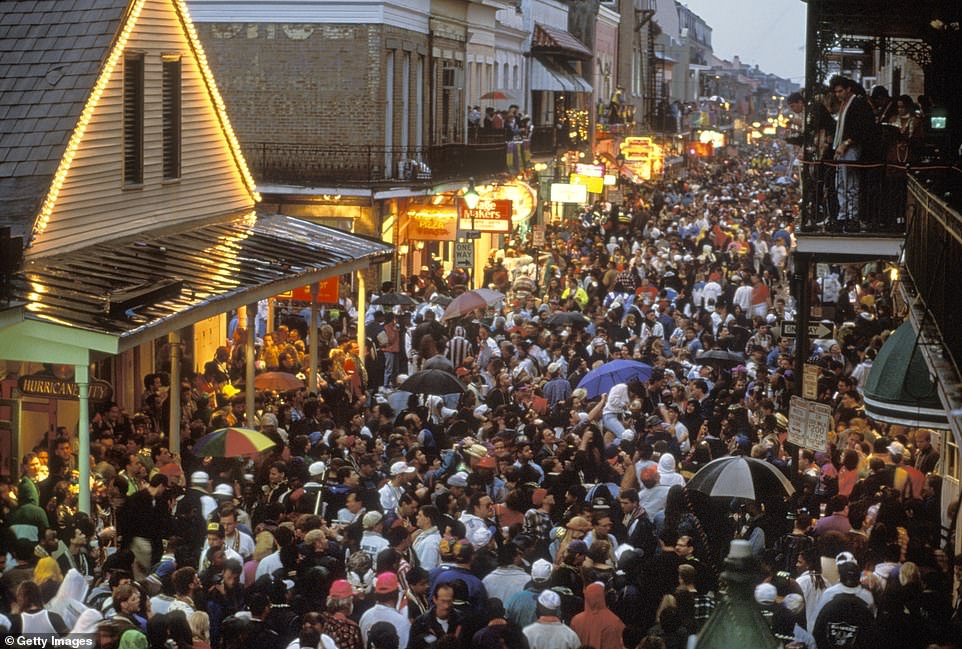 A massive crowd of visitors crushes onto Bourbon Street to celebrate Mardi Gras. The celebration has been linked with the massive spread of the coronavirus in the city and across Louisiana, with one of the deadliest coronavirus outbreaks 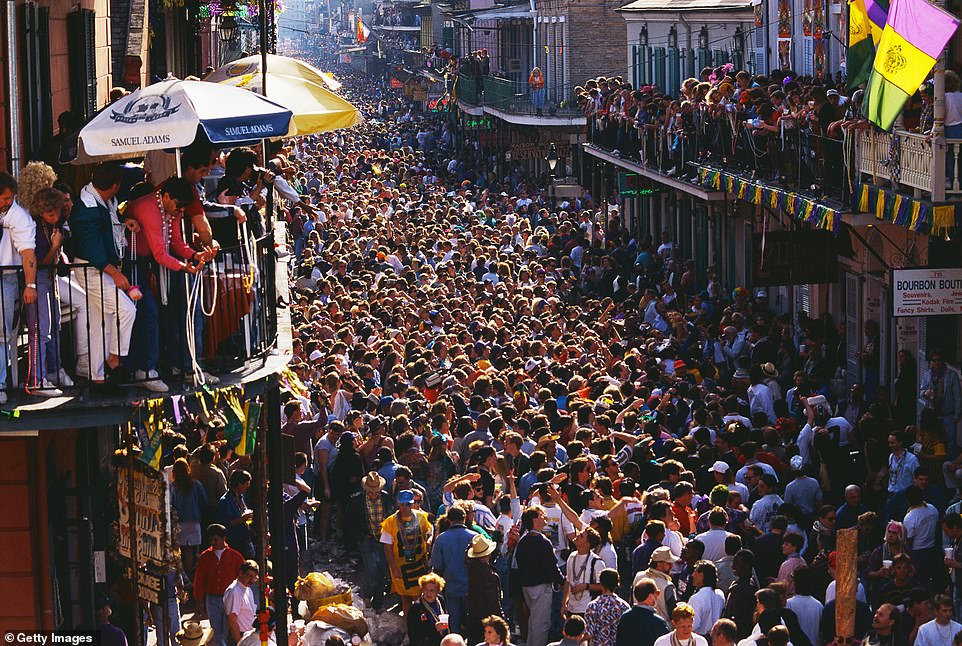 Crowds fill the streets of New Orleans during Mardi Gras. Louisiana Gov. John Bel Edwards claims that he had no idea the celebration could cause such a fatal outbreak of the coronavirus in the city and state 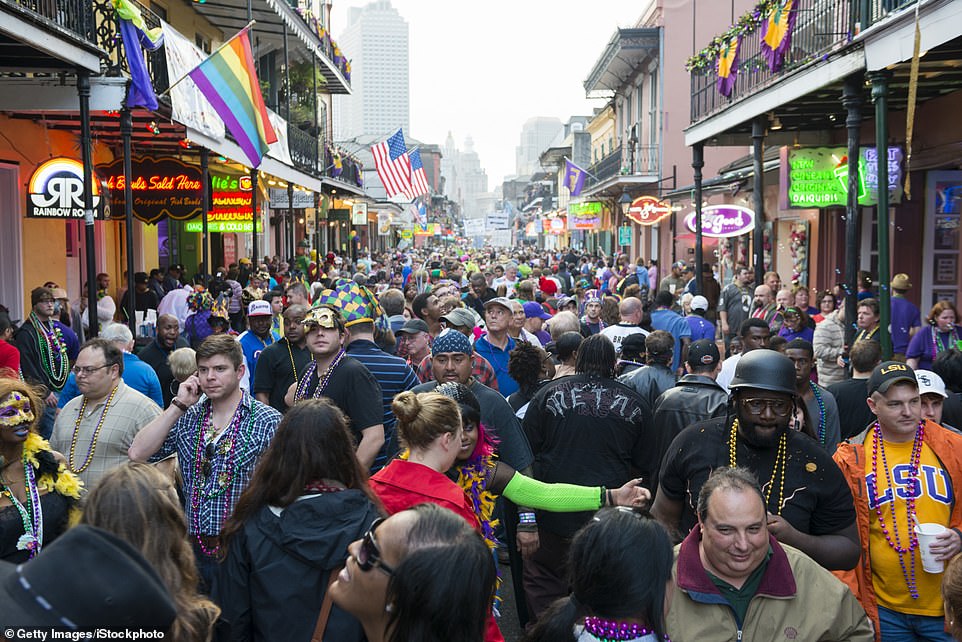 Beads and crowds on Bourbon Street during Mardi Gras in New Orleans. In stark contrast to this scene, the city’s streets now lie empty and silenced by one of the worst coronavirus outbreaks in the country that has a concerning fatality rate

Gov. Edwards said Thursday that there is reason to believe the virus is finally plateauing in the state.

While deaths are at a high, cases are slowing down and the state is no longer facing an imminent shortage of medical resources. There were 50 new deaths reported in the state on Thursday, down from 70 deaths on both Wednesday and Tuesday.

Models from the Institute for Health Metrics and Evaluation, which is often cited by the White House Coronavirus Task Force, had predicted that Tuesday would be the peak of the state’s deaths.

Currently, 2,014 coronavirus patients in Louisiana are in hospitals. Of that number, 473 are on ventilators.

The number of ventilators in use decreased for the third day in a row, down 17 to 473 and Louisiana now appears to be out of the danger zone in terms of an immediate danger of running out of the crucial respiratory device. 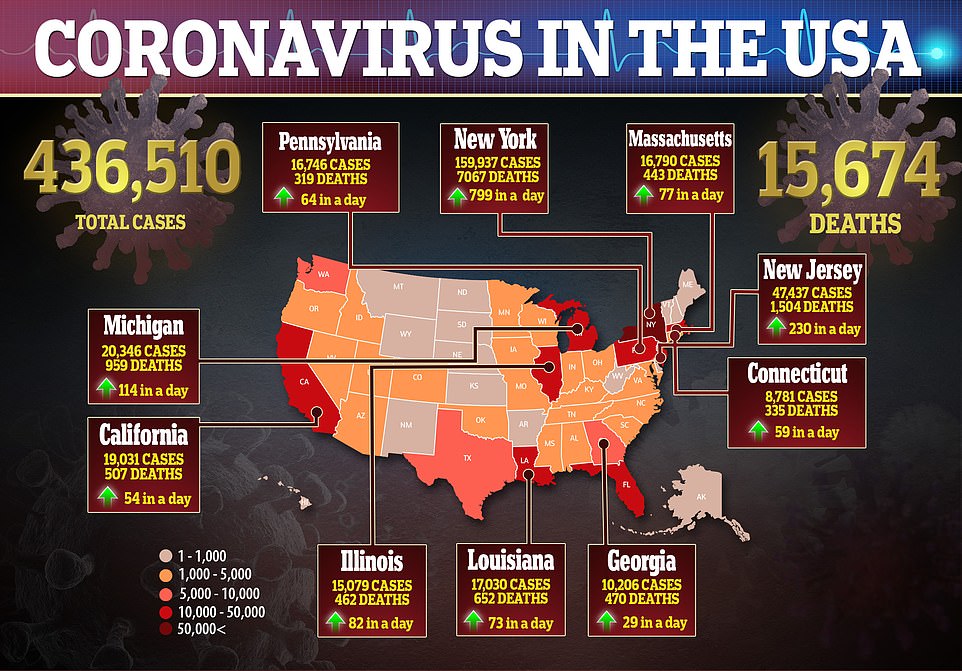 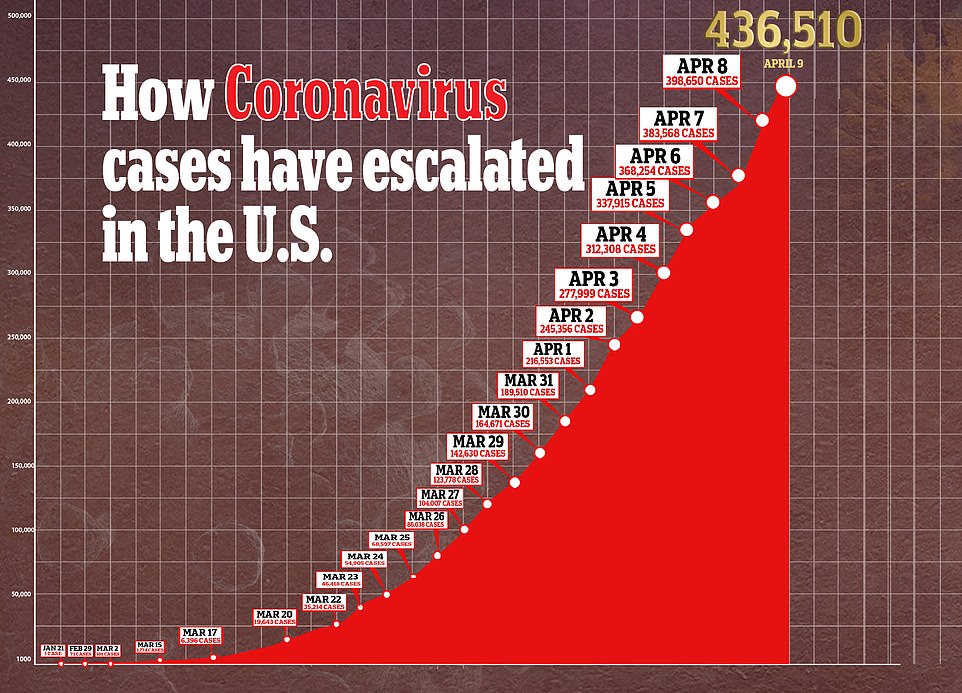 Gov. Edwards warned that social distancing across the state must be maintained this Easter weekend.

The Archdiocese of New Orleans is streaming its Easter Mass and other churches and religious organizations are moving services online to remind people to stay home.

Some 97 percent of those killed by COVID-19 in Louisiana had a pre-existing condition, according to the state health department.

Diabetes was seen in 40 percent of the deaths, obesity in 25 percent, chronic kidney disease in 23 percent and cardiac problems in 21 percent.

Data on coronavirus deaths and race has also been a hot topic in Louisiana, with the state seeing more than 70 percent of African Americans dying of the virus. Health officials said 28 percent of Caucasians died of COVID-19 in the state. 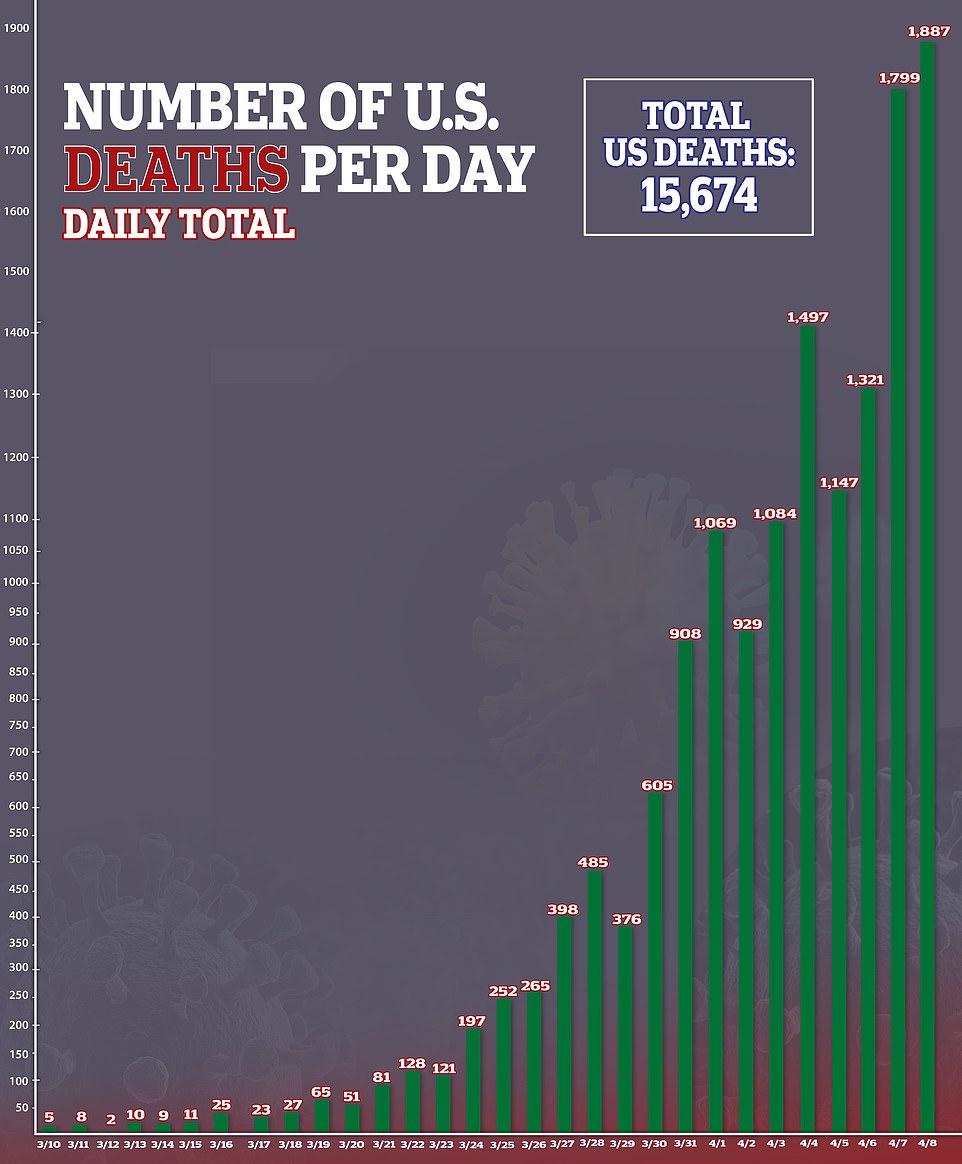