Is 5G Safe? What You Need to Know

By the end of 2019, 5G technology should begin to roll out. Tech enthusiasts, the Federal Communications Commission (FCC), and telecom companies tout 5G as the best thing since sliced bread because it will significantly improve wireless communication. Some experts even claim it will spur innovation and job creation. These enthusiasts aren’t talking about the 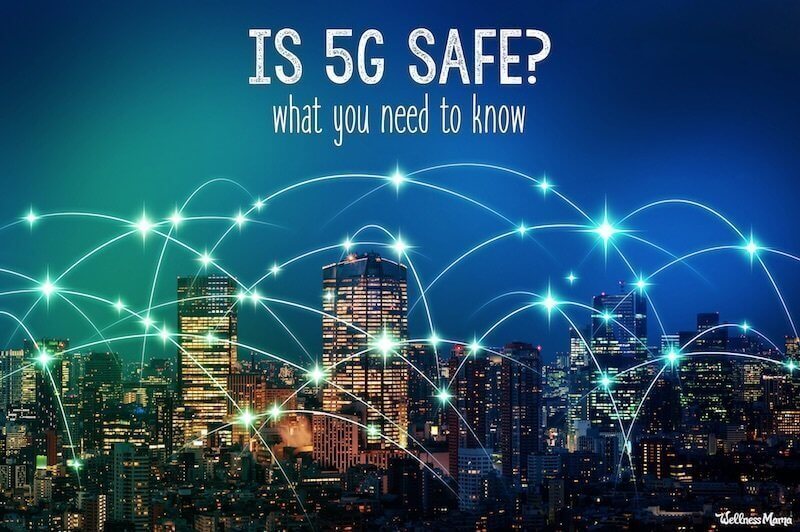 By the end of 2019, 5G technology should begin to roll out. Tech enthusiasts, the Federal Communications Commission (FCC), and telecom companies tout 5G as the best thing since sliced bread because it will significantly improve wireless communication. Some experts even claim it will spur innovation and job creation. These enthusiasts aren’t talking about the safety of 5G however.

We’ve talked about the safety of Wi-Fi before, but with 5G the concerns are slightly different and many would argue much bigger.

5G stands for the fifth generation of cell phones. Every ten years or so the Next Generation Mobile Networks Alliance releases new standards for wireless communication. These standards are updated based in part on consumer demand.

When cell phones were invented 30+ years ago they were analog (1G) but then switched to digital with the next generation (2G). As the digital generations went on, cell phone signals became capable of sending information faster and faster.

For example, 4G cell phones (what most people have now) are a data stream that is 2 gigahertz and can pass 10 megabits of information, which is enough to stream video.

But the frequency that 4G currently occupies (2 gigahertz) does not have enough room for all of the data 5G will be transferring. Every generation has increased in frequency to allow for more data transfer.

A cell phone that is 5G on the other hand uses millimeter waves and is up to 90 gigahertz (remember, 4G is 2 gigahertz in comparison). These cell phones also include something new called MIMO.

MIMO stands for multiple in, multiple out, which means there isn’t just one stream of data, but multiple data streams. As happens with new technology, 5G is exponentially faster and more sophisticated than 4G.

Pros and Cons of 5G

The benefits of 5G are obvious. A faster phone (or other devices) means potentially being able to send and receive exponentially more information. It’s also going to be more responsive, reducing the lag time (between tapping a link and the page loading) down to a millisecond.

5G will also support more connections. That means that objects beyond phones, laptops, and tablets can have an Internet connection… stoves, fridges, locks, you name it. The intention is to make life easier by creating this interconnected web of objects (Internet of Things — IoT) that can communicate amongst themselves and be controlled remotely. This sounds good to most of us!

However, there are some serious downsides to 5G communication:

Electromagnetic fields (EMFs), also known as electromagnetic radiation, consist of photons in an electric field and a magnetic field that run perpendicular to each other. These fields travel together in an invisible waveform. There are two forms of EMFs:

EMFs (also known as radiofrequency radiation) from 5G technology is considered non-ionizing, though at a much higher frequency than previous generations.

It’s widely known that the human body is a sophisticated electromagnetic system. The nervous system, circulatory system, and even mitochondria run on electrical impulses.

The earth and solar system also have natural EMFs. For example, Earth has its own magnetic field, which is why we can use a compass to find the north pole. The sun is also a natural source of EMFs (visible light and UV radiation). Obviously, we live well and thrive with these sources of EMFs.

There are many people who claim that since the signals from cell phones, Wi-Fi, and similar sources are non-ionizing, they are safe.

While 5G technology is as much as 45 times the frequency of 4G, we don’t really know what that means for our health. Technology evolves so rapidly we hardly have time to notice any effects.

I didn’t have a cell phone until I was in college, and I certainly didn’t have any kind of tablet or smartphone. In one generation we’re seeing a complete change to the electrical environment we live in and raise our kids in. Kids, babies, and the unborn are at the biggest risk based on their size. Current EMF guidelines are based on a 6 foot tall man, not children or babies!

EMF expert Daniel DeBaun explains in this podcast episode how EMF awareness resembles the way we learned about the health effects of trans fats. The research proving trans fats were harmful came out 45 years ago, yet only a few years ago did the public start to fully understand the risk and companies begin to phase them out (and only after a ban).

What the Science Says About EMFs

These guidelines are in place because there is some concern over the safety of EMF exposure. What we know about the health risks of EMFs up to 4G is concerning enough.

In a 2011 Lancet article, the International Agency for Research on Cancer (IARC) concluded that, due to the limited amount of research available, EMFs are classified as class 2B possible carcinogen.

The IARC explains that short-term studies on humans who use EMF emitting devices are not conclusive (note that studies for long-term use are impossible because the technology is so new). However, in rodent studies that follow the animals throughout their lifetime, wireless radiation was found to cause cancer or worsen cancer prognosis. There were additional observed changes in the brain and blood-brain barrier in these animals.

A 2017 review clearly demonstrates that EMF exposure can affect human health by causing:

Additionally, a 2014 study found that even very low-frequency EMFs cause DNA damage and potentially cancer.

These studies make it clear that there is a potential, if not real, threat to our health and environment from EMFs as we’ve experienced them up until now.

How These Health Concerns Grow With 5G

Based on the health concerns we are already seeing with EMFs and the fact that 5G is just going to increase the EMF load on our bodies, it’s not surprising that there are health experts with strong concerns.

According to a letter written by biochemistry professor and expert on EMF health effects Dr. Martin Pall, the potential health effects include the following:

Dr. Pall continues to explain that the impact on plants, animals, and insects is as serious if not more so than the impact on humans.

Studies back up Dr. Pall’s concerns as well. A national science panel meeting in 2018 concluded that there was a clear link between cellphone radiation and cancer in rats. This was an unexpected finding that came after the FDA and American Cancer Society deemed the same research inconclusive.

Even politicians are expressing concerns about the health and safety of 5G technology. At a 2019 Senate Commerce, Science, and Transportation Committee Hearing, Connecticut Senator Blumenthal questioned the safety of 5G. He asked the 5G industry representatives how much money they have set aside for research on the biological effects of 5G. The reply was: none.

Senator Blumenthal explained that Americans deserve to know the health effects of 5G and that we shouldn’t just make assumptions about that safety. He also said that it is the responsibility of the industry to investigate the safety of its products (in this case, 5G).

Exponential Increase in Frequency and Exposure

As mentioned earlier, some EMFs (like those naturally present from the earth and sun) are not harmful. Whether a certain EMF is dangerous depends on a few things:

The two biggest concerns for 5G is the (much) higher frequency and the expected increase in exposure for most people. As mentioned earlier, 5G is going to operate at a frequency of as much as 90 gigahertz while all previous generations operated at below 5 gigahertz.

The increase in “towers” or antenna cells through the community will cause excess exposure too. These cells will have a maximum coverage area of just about 1.25 miles (some cover only 50 feet) so many of them will be needed for relatively small areas.

This means that if you live in a relatively populated area (i.e. not the middle of nowhere) you are almost guaranteed to be living, working, or sending your kids to school near a source of high EMFs.

How to Protect Your Family From 5G Dangers

Knowing all the concerns about 5G and EMFs, in general, can feel overwhelming and scary. Luckily there are some simple things we can all do to drastically reduce our exposure.

While 5G will be rolling out soon, that doesn’t mean you have to jump on the bandwagon. If you just want to be able to stream music or video once in a while 4G is good enough. You can turn off the 5G functionality in your router and avoid buying 5G devices.

Keep Devices Away From the Body

One of the simplest ways to avoid EMFs is to simply put distance between you (or your kids) and your devices. US speaker phone, use your laptop plugged into a monitor (that can be placed about 2 feet away from you), and don’t keep your phone in your pocket.

As long as you can get the signal, there’s no reason your Wi-Fi router needs to be in your home. Consider moving it to the garage or porch to reduce EMFs. If you can’t move Wi-Fi out of the house entirely, try to move it to a location far from bedrooms (at least kids’ bedrooms).

The time that we sleep is actually the most important time to reduce EMFs. Sleep time is when the body repairs and cells can be even more sensitive to toxins. Keep devices away from bedrooms at night. Turn off devices and wi-fi at night too (you can do this easily and inexpensively). This can reduce EMF exposure by 33 percent!

Cell phones and tablets emit electromagnetic frequency when the receivers are turned on. Exposure levels for these devices are especially high since we tend to use them close to our bodies. If you need to use a device but don’t need to be connected, turn on airplane mode (and remind caregivers and kids to do this too).

Hardwire Instead of Using Wi-Fi

Giving up Wi-Fi in the home can save your family a lot of exposure to EMFs. Consider hard wiring devices instead of using Wi-Fi. Doing this give you more consistent and faster Internet too. It’s more work for sure, but may be worthwhile.

There are plenty of reasons to limit screen time, and EMF exposure is one of them. Since duration is one of the factors for deciding how dangerous an EMF is, it makes sense to set firm limits on screen time.

If you want to go one step further you can invest in some shielding products. This is especially helpful if you can’t avoid being near devices all day (like if you work at a computer!). You can try a Defender Pad under your laptop and EMF shields on cell phones.

Is 5G Safe? The Jury’s Still Out on This Public Health Issue

We just don’t know if 5G is safe or not because there is very little research on current 4G technology (and none for 5G!). But there is considerable evidence that EMFs at their current levels are unsafe, and at 5G levels may be even worse.

Naysayers may disagree, but I urge everyone to think logically about this. If we take precautions (which don’t cause much inconvenience) and find out the EMFs are totally safe (which I doubt) we haven’t lost anything. But if the flip side is true and EMFs (especially from 5G) are causing cancer and other health issues, and we do nothing about it, in 20 years we will have lost a lot.

What is your opinion on EMFs? What are you doing about 5G wireless?