I remember getting into a night-time eating habit during one pregnancy. It’s easy to justify when you’re growing a human, but these habits can stick around later on. Though it may be helpful during pregnancy and nursing to have a snack before bed, at other times it may actually be unhealthy. An easy way to 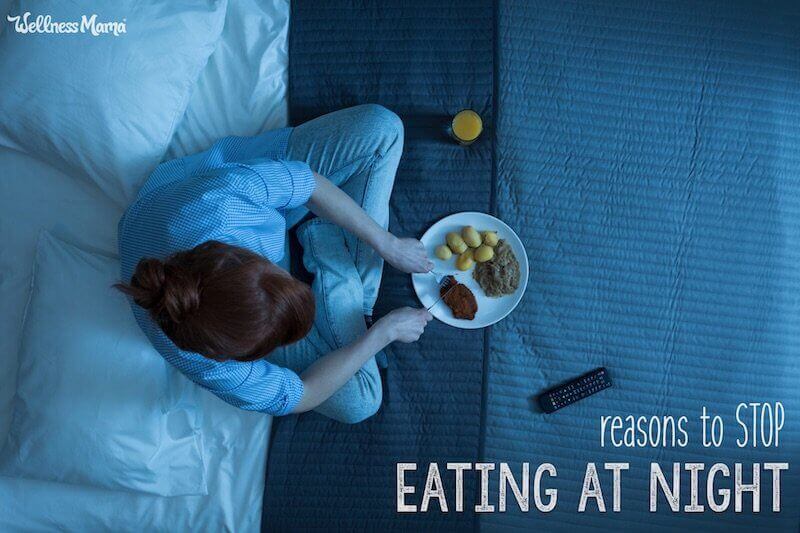 I remember getting into a night-time eating habit during one pregnancy. It’s easy to justify when you’re growing a human, but these habits can stick around later on. Though it may be helpful during pregnancy and nursing to have a snack before bed, at other times it may actually be unhealthy.

An easy way to get the benefits of fasting (without doing a longer, more extreme fast) is to simply avoid eating a few hours before bed.

Research is showing that intermittent fasting has many benefits, but for some, even a short 16-hour fast is tough to stick with. Luckily, just eliminating night-time eating can have many of the same results.

Here are some reasons to brush your teeth early and call it a night when it comes to eating!

Our bodies also need to sit upright to digest, so eating before lying down can cause digestive problems. Research shows that eating late can contribute to acid reflux.

Late-night eating may also affect the brain. One study found that mice that ate during their normal sleep time (since mice are nocturnal that would be during the day) had significant decline in memory.

Another study showed that mice even forgot scary situations, which could mean that eating when they should be sleeping could be serious. (If a mouse doesn’t remember there is a danger he won’t avoid it.) Researchers also found that the shifted eating schedule affected the mice’s ability to learn.

It’s hard to tell how humans would do in a similar experiment, but it does raise concern for how a shifted sleep and eating schedule could affect the brain.

Stopping the food train a few hours before bed can be beneficial for sleep — something we as moms are always trying to optimize.

Researchers have found that eating late at night may influence dreaming. Four hundred college students were surveyed about their eating habits and dreams. These surveys showed that one factor for causing bizarre or disturbing dreams was eating late at night. Researchers further theorized that the reason was likely due to bad digestion.

Human hormones follow the ebb and flow of the circadian rhythm too. At night when the body thinks it should be sleeping, the body’s cells become more resistant to insulin. An article published in Journal of the Academy of Nutrition and Dietetics shows that eating according to circadian rhythms is important for optimal metabolic function.

There’s an old health adage that says, “Eat breakfast like a king, lunch like a prince, and dinner like a pauper.” The idea is to eat more during the time of day when the digestive system is performing best.

Though there is plenty of reason to stop eating before bedtime, a small snack may be ok. Research shows that small, nutrient-dense, low energy foods and/or single macronutrients (like a small portion of vegetables rather than large mixed meals) don’t have the same negative effects as night-time eating. In fact, it may even have some health benefits (like building muscles).

Basically, having a small, healthy snack before bed when you’re hungry may not be as harmful as having a full meal close to bedtime. If you often skip breakfast and also don’t have a substantial lunch (so easy to do on a busy day), we have to take an honest look at whether we are eating too large of a meal too late at night to compensate.

How to Stop Eating at Night

So, how far before bed to stop eating? The answer can vary depending on individual needs, schedules, and levels of activity, of course, but most experts seem to recommend at least two hours before bed.

Especially as parents who may only get some time to ourselves at night, this is a tough thing to ask! These are some ways I’ve tried to adjust my eating window (while still getting some me-time at night).

Often, late-night snacks may have nothing to do with hunger! Is it boredom, stress, or another emotional trigger behind the craving? Recognizing triggers can help us deal with the underlying cause of snacking.

Eat Enough During the Day

Sometimes late-night snacking is a result of true hunger because we haven’t eaten enough during the day. Eat nutrient-dense meals earlier in the day (and don’t skip any!) to avoid the hunger that happens at night. This is especially important (and tough) for parents of small kids who may “forget” to eat when busy with infants and toddlers.

Making a plan to sit down to a meal with your family at breakfast, lunch, and dinner (when possible) can help increase daytime eating and decrease night-time cravings.

For many folks, carb and sugar cravings are what drive those late-night snacks. Balancing blood sugar levels by eating three nutrient-dense meals (with plenty of protein and healthy fat) during the day can help.

Other ways to avoid sugar cravings are:

And no, I don’t mean alcohol ? I loved Nagina Abdullah’s tip from this podcast to satisfy late night cravings with the natural sweetness and flavors of spiced drinks like cinnamon tea or golden milk.

If Snacking, Make It Light

If I do have a snack, I try to choose something balanced and easy to digest. And if I have wine, I make sure it is low sugar as well.

Final Thoughts on Why to Stop Eating at Night

There are many health benefits to closing the kitchen at least two hours before bedtime, including hormone regulation and healthy blood sugar. Having a consistent routine that helps folks eat more during the day and less at night can help shift a late-night snacker into a day-time eater.

Have you tried fasting at night? Do you notice any difference in how you feel? Please share!