Class-action lawsuit accuses Cupertino of flogging personal info to marketroids And then we told them “what happens on your iPhone, stays on your iPhone!” Apple has been hit with a class-action complaint in the US accusing the iGiant of playing fast and loose with the privacy of its customers. The lawsuit [PDF], filed this month 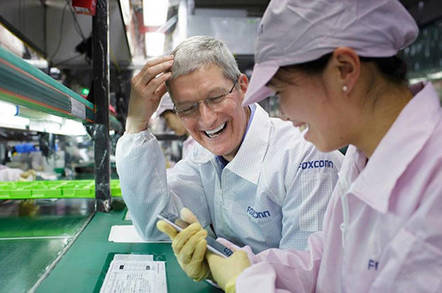 Apple has been hit with a class-action complaint in the US accusing the iGiant of playing fast and loose with the privacy of its customers.

The lawsuit [PDF], filed this month in a northern California federal district court, claims the Cupertino music giant gathers data from iTunes – including people’s music purchase history and personal information – then hands that info over to marketers in order to turn a quick buck.

“To supplement its revenues and enhance the formidability of its brand in the eyes of mobile application developers, Apple sells, rents, transmits, and/or otherwise discloses, to various third parties, information reflecting the music that its customers purchase from the iTunes Store application that comes pre-installed on their iPhones,” the filing alleged.

“The data Apple discloses includes the full names and home addresses of its customers, together with the genres and, in some cases, the specific titles of the digitally-recorded music that its customers have purchased via the iTunes Store and then stored in their devices’ Apple Music libraries.”

What’s more, the lawsuit goes on to claim that the data Apple sells is then combined by the marketers with information purchased from other sources to create detailed profiles on individuals that allow for even more targeted advertising.

Additionally, the lawsuit alleges the Music APIs Apple includes in its developer kit can allow third-party devs to harvest similarly detailed logs of user activity for their own use, further violating the privacy of iTunes customers.

The end result, the complaint states, is that Cook and Co are complacent in the illegal harvesting and reselling of personal data, all while pitching iOS and iTunes as bastions of personal privacy and data security.

“Apple’s disclosures of the personal listening information of plaintiffs and the other unnamed Class members were not only unlawful, they were also dangerous because such disclosures allow for the targeting of particularly vulnerable members of society,” the complaint reads.

“For example, any person or entity could rent a list with the names and addresses of all unmarried, college-educated women over the age of 70 with a household income of over $80,000 who purchased country music from Apple via its iTunes Store mobile application. Such a list is available for sale for approximately $136 per thousand customers listed.”

Apple did not respond to a request for comment on the lawsuit.

The class-action suit also looks to collect damages for others covered by those laws, and these sort of suits will often be expanded or merged with other cases to cover a much larger class of customers. The suit seeks a jury trial to decide damages. ®