Jeremy Corbyn will tonight block Boris Johnson’s hopes of holding a general election on December 12 as the Prime Minister plots a ‘Plan B’ to outflank the Labour leader.  Mr Johnson will this evening ask MPs to back holding a pre-Christmas snap poll and under the terms of the Fixed-term Parliaments Act 2011 he will

Jeremy Corbyn will tonight block Boris Johnson’s hopes of holding a general election on December 12 as the Prime Minister plots a ‘Plan B’ to outflank the Labour leader.

Mr Johnson will this evening ask MPs to back holding a pre-Christmas snap poll and under the terms of the Fixed-term Parliaments Act 2011 he will need the support of two-thirds of the House of Commons to get his wish.

But Mr Corbyn and his top team decided at a special shadow cabinet meeting at lunchtime today that Labour MPs will be instructed to abstain on the vote.

That means the Prime Minister will almost certainly fail to secure the support of the 434 MPs he needs to trigger an election.

It will be the third time that Mr Corbyn has thwarted Mr Johnson’s hopes of going to the country early.

The decision to abstain will prompt a furious reaction from Mr Corbyn’s political opponents, with the Tories, Liberal Democrats and SNP all now united in their desire for an election to be held in December.

However, it does mean that Mr Corbyn will avoid a damaging rebellion on his own backbenches.

Pro-Remain Labour MPs had made clear they will not vote for an election to take place before Brexit has been resolved.

They are concerned that if Labour fights an election with its existing policy of staying neutral on Brexit then the party will be decimated at the ballot box.

The decision to tell Labour MPs to abstain on tonight’s vote represents a major victory for shadow cabinet figures like Sir Keir Starmer and Emily Thornberry who want a second referendum to be held before an election.

Mr Corbyn had previously said he would support an early election once a No Deal Brexit had been ruled out.

That demand appeared to have been met today after the EU granted the UK a three month delay to its departure date but that was not enough for the Labour leader to support the PM’s proposed way forward.

Now that Mr Corbyn has opted to block this evening’s vote, Downing Street is now expected to pivot to pursuing a ‘Plan B’ in a bid to isolate Labour. 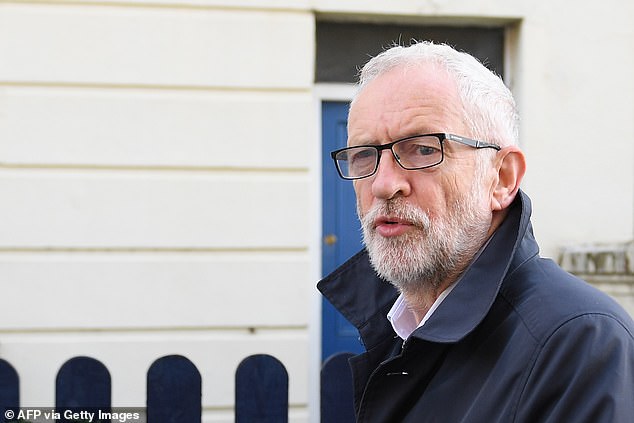 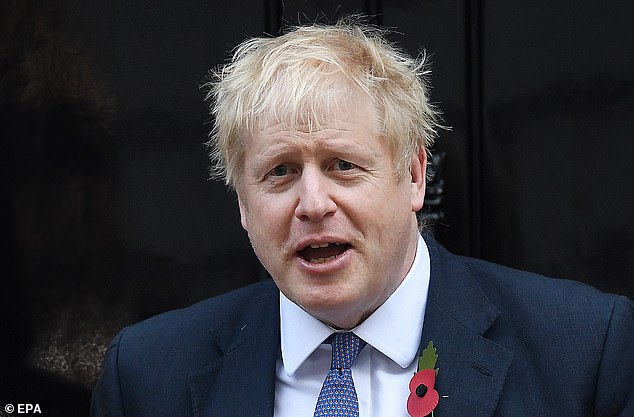 Boris Johnson, pictured in Downing Street today, wants MPs to vote for his plan to hold an election on December 12

The Liberal Democrats and SNP have combined forces to bring forward a plan which would ask MPs to vote in the coming days for a draft law calling for an election to be held on December 9.

Number 10 views the plan as a good fallback option and sources suggested that the government will bring forward its own version of the Lib Dem/SNP bill if the PM fails tonight.

So even if Mr Corbyn successfully blocks an election this evening it is possible that the Tories, Lib Dems and SNP could have forced a pre-Christmas poll against his wishes by the end of the week.

Westminster is now focused on whether there should be an election after Brussels granted the UK a three month Brexit delay.

The chances of MPs using that time to pass Mr Johnson’s Brexit deal appear slim with all eyes now on when an election will be held.

The Tories believe that they can win the next election by pledging to ‘get Brexit done’. If Mr Johnson won a majority he would then rush his divorce deal through Parliament. 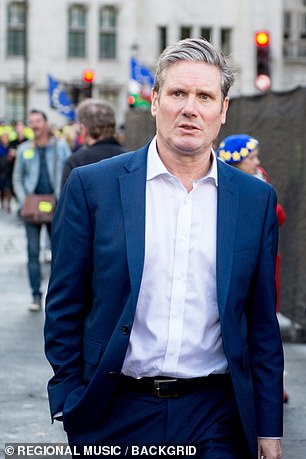 The pro-Remain Lib Dems and SNP also believe they can perform strongly at a snap poll as they seek to capitalise on pro-EU support across the country.

But many senior Labour figures believe the party is ill-prepared for a pre-Brexit election.

A number of prominent members of the shadow cabinet including Ms Thornberry and Sir Keir favour holding a second referendum before an election so that the sting can be taken out of the Brexit question before voters are asked to elect a new set of MPs.

Many recent opinion polls have Labour trailing the Tories by double digits and the party’s MPs cite those numbers as evidence that an election must be avoided.

One set out their opposition in colourful terms to the Politics Home website as they said: ‘I won’t be voting for a general election come hell or high water. They can go f*** themselves. Brexit must be sorted.

‘As for winning, you’ve got to be pretty dim to ask for the chequered flag when you’re stuck at the back of the grid.’

The prospect of the Lib Dems and SNP working with the Tories to force an early election sparked anger from John McDonnell.

John McDonnell responded with fury to the prospect of the Lib Dems, SNP and Tories working together to force an early election

The shadow chancellor tweeted: ‘Looks like the Lib Dem and Tory pact of 2010 is being re-established.

‘They are back together, selling out the People’s Vote campaign and the cross party campaign to prevent a no deal.

‘The Lib Dems will stop at nothing to get their ministerial cars back.’

Last night Labour frontbencher Lucy Powell told the Westminster Hour that an ‘election soon is now both inevitable and necessary’.

She said: ‘Parliament is in a deadlock and we need to break that deadlock somehow, even if Brexit is done.