An array of the industry’s leading celebrities joined forces to pay tribute to NHS workers for risking their lives everyday amid the coronavirus pandemic. Actress Kate Winslet, screenwriter Phoebe Waller-Bridge and thespian Jude Law were among the stars who expressed their gratitude towards the healthcare professionals as they held up ‘thank you’ placards in a

An array of the industry’s leading celebrities joined forces to pay tribute to NHS workers for risking their lives everyday amid the coronavirus pandemic.

Actress Kate Winslet, screenwriter Phoebe Waller-Bridge and thespian Jude Law were among the stars who expressed their gratitude towards the healthcare professionals as they held up ‘thank you’ placards in a heartwarming clip.

Stars including musician Sir Elton John, pop princess Kylie Minogue and former footballer David Beckham also shared their appreciation to key workers for their tireless efforts to keep the nation running in the second week of the lockdown during the crisis, which has claimed 2,921 lives in the UK alone.

In the video, uploaded to YouTube by NHS England, each public figure flashed their cards emblazoned with the slogans #OurNHSPeople and #ThankYouNHS.

It is believed to have been organised by film director and producer Matthew Vaughn, and was released as households across the country prepared to pay further tribute to NHS staff.

Chief Nursing Officer for England Ruth May kicked off the clip by sharing: ‘I want to say a very big personal thank you to everyone in the NHS and social care that are working so hard right now.

‘And I also wanted to say thank you to those people that are re-joining our NHS at this time in our COVID-19 response. 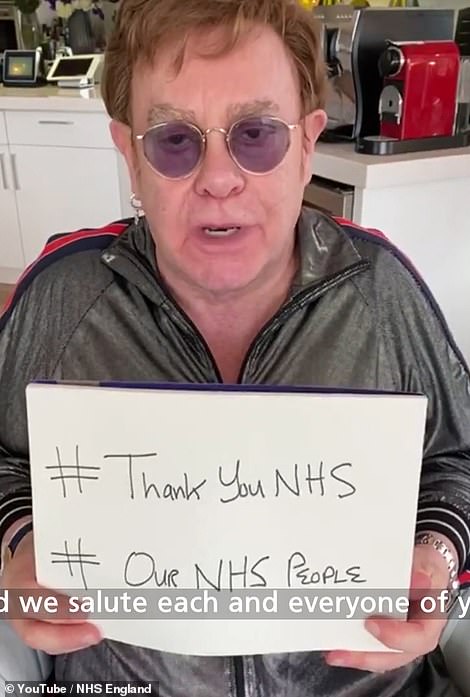 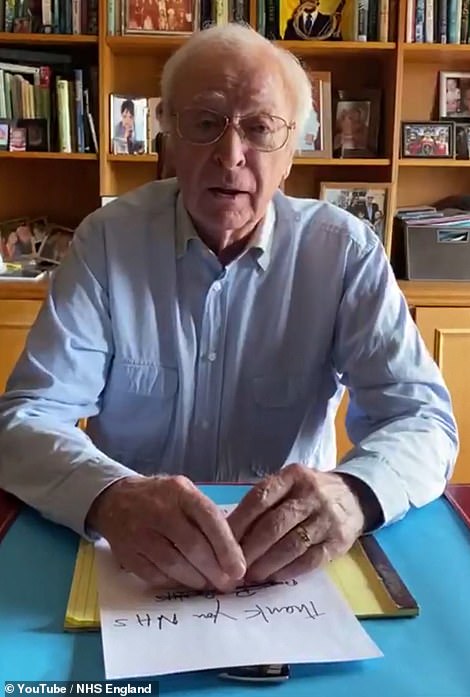 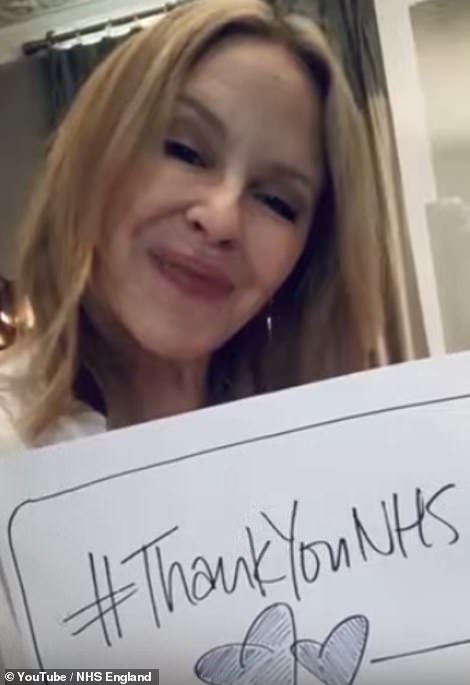 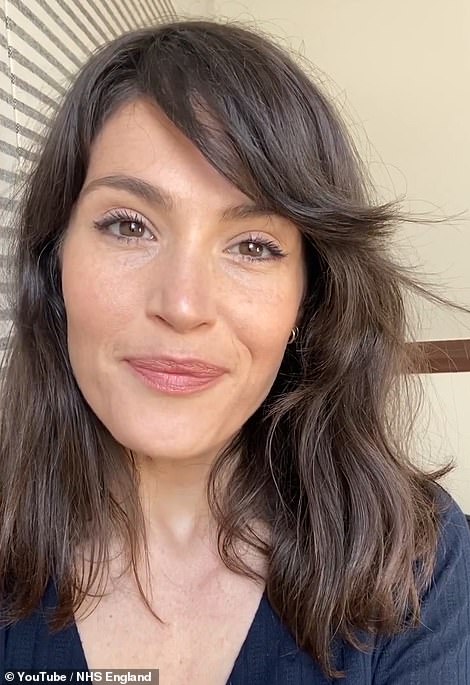 On a mission: Pop princess Kylie Minogue put on a cheery display as she adorned her note with hearts, while actress Gemma Arterton looked typically stunning while thanking staff

‘I know that messages of thanks and support mean a lot to our NHS staff, whenever they happen and whoever they come from – but for so many huge celebrities to go out of their way to show their appreciation will be an extra special boost, alongside the heart-warming displays of gratitude shown by the public.

‘This is the biggest challenge the NHS has ever faced and celebrating those working hard to save lives every day is more important than ever, so I’m sure everyone will benefit from some uplifting music to keep spirits high right now.’

‘You are out heroes, and we salute each and everyone of you’, Rocketman icon Elton, 73, said in a brief speech, before more than 70 stars of the stage, screen and sports fields joined in for the great cause. 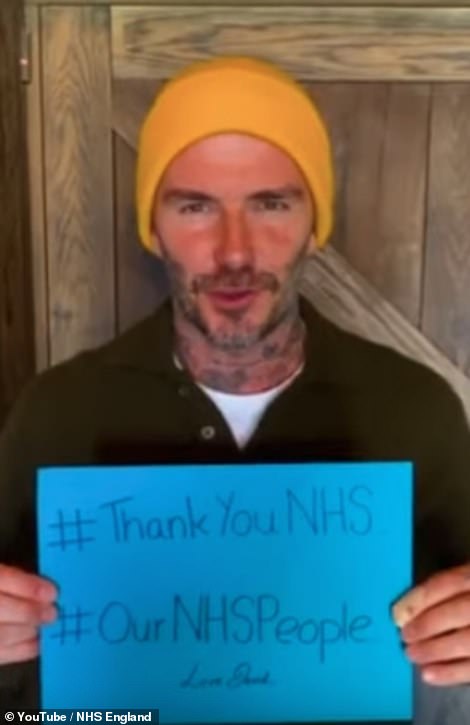 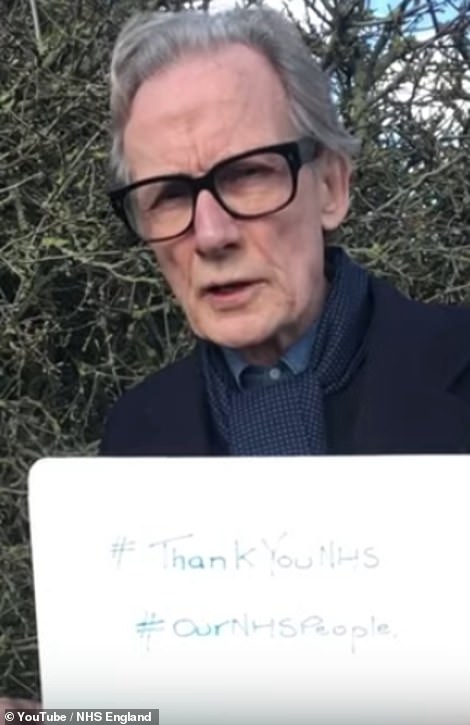 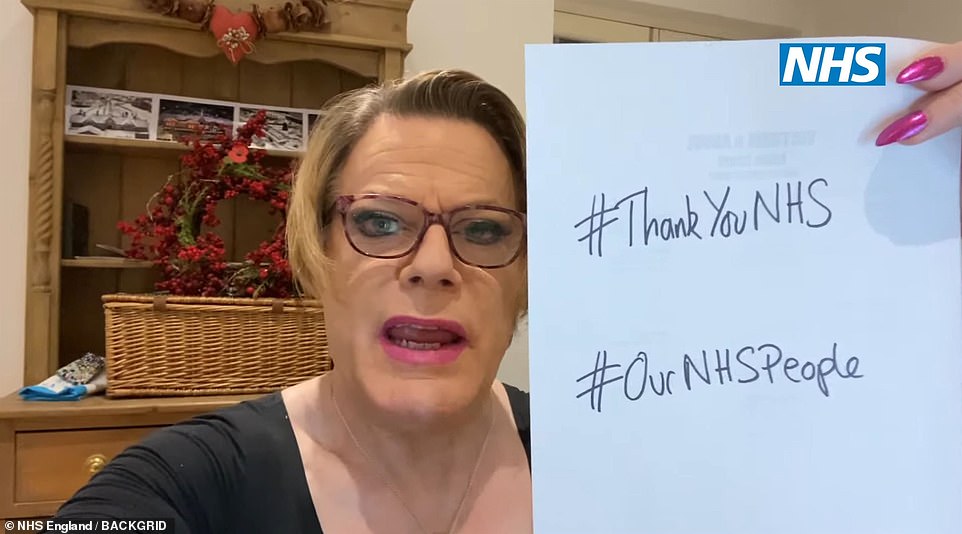 Proud: Eddie Izzard showed his support for the vital NHS workforce as he joined in 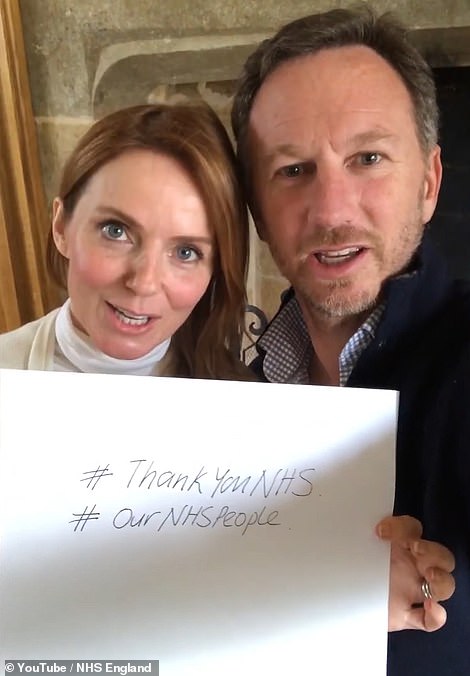 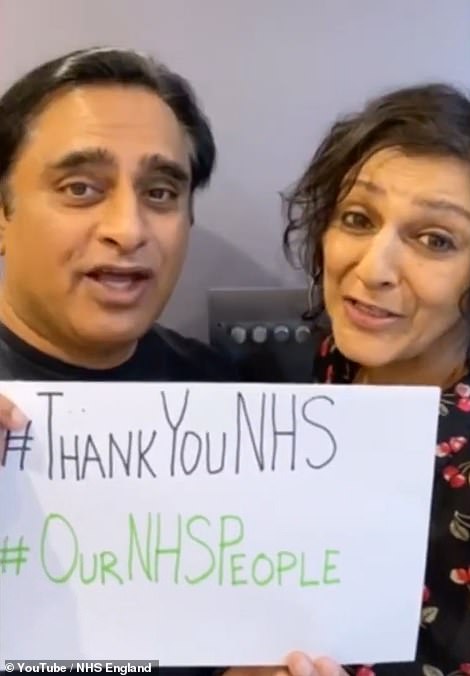 Couples’ edition: (L-R) Geri and Christian Horner cosied up to each other, while Sanjeev Bhaskar and Meera Syal also joined in on the fun

While many said ‘thank you’, presenter Jonathan Ross elaborated: ‘Hello, I want my add my voice to the many who are already saying this, but a profound and sincere thank you for what you’re doing.’

For a second week, millions stood at their front doors or leant out of windows to applaud and cheer on Thursday evening.

The event, organised by the Clap For Our Carers campaign, was expanded to include all key workers, such as supermarket staff, the emergency services and teachers who are working through the coronavirus outbreak.

Among the locations to be illuminated in blue – the colour of the NHS – were the Shard in central London and Windsor Castle. 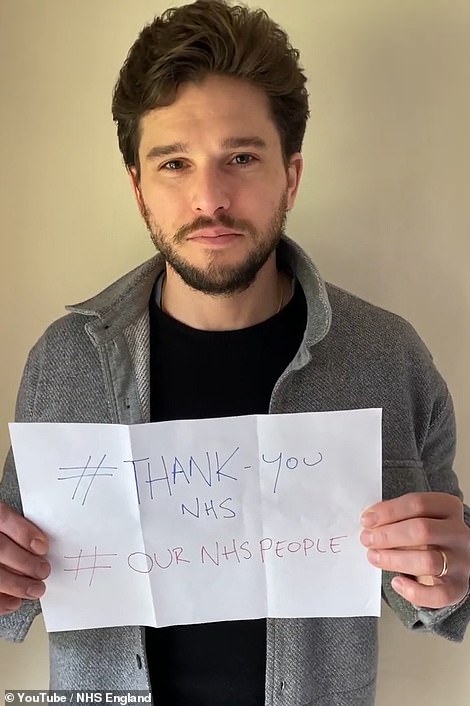 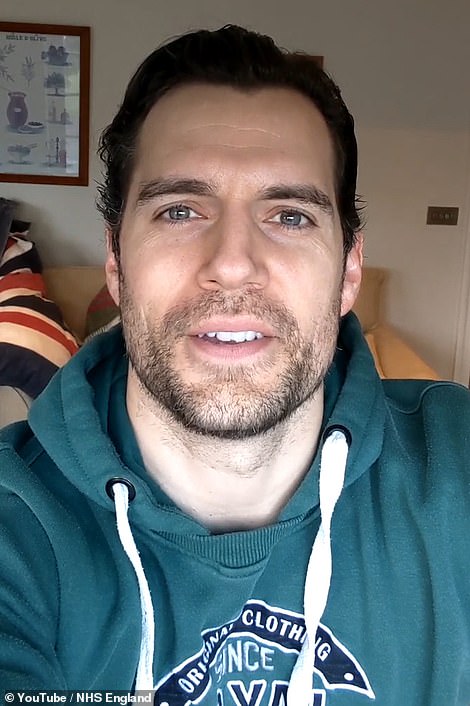 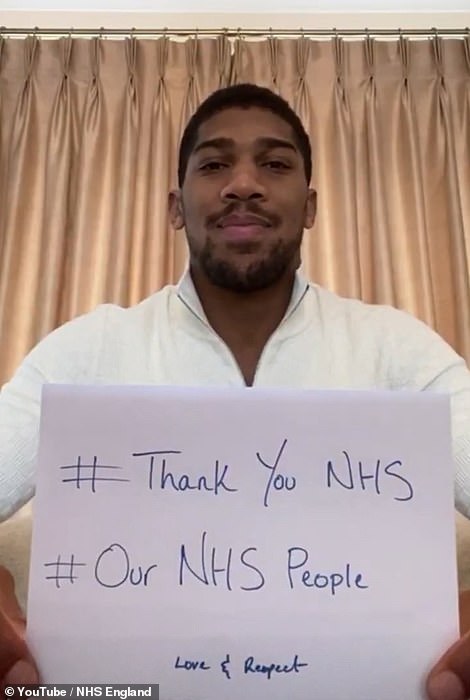 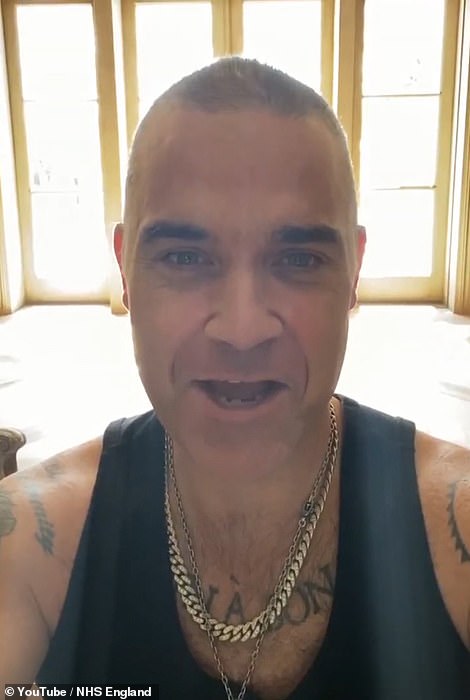 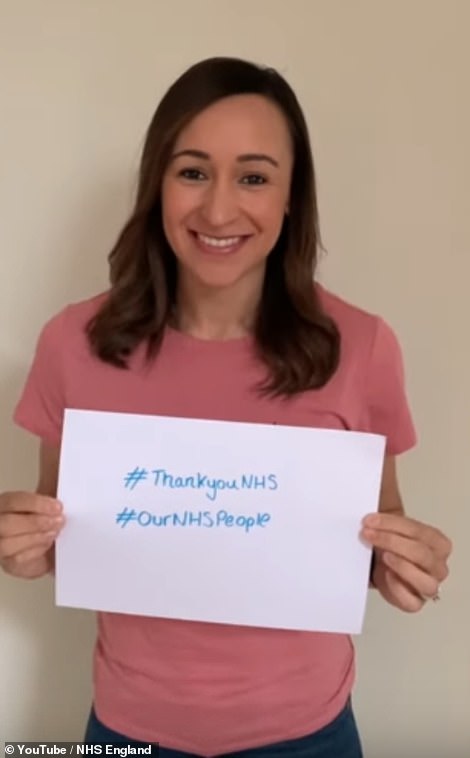 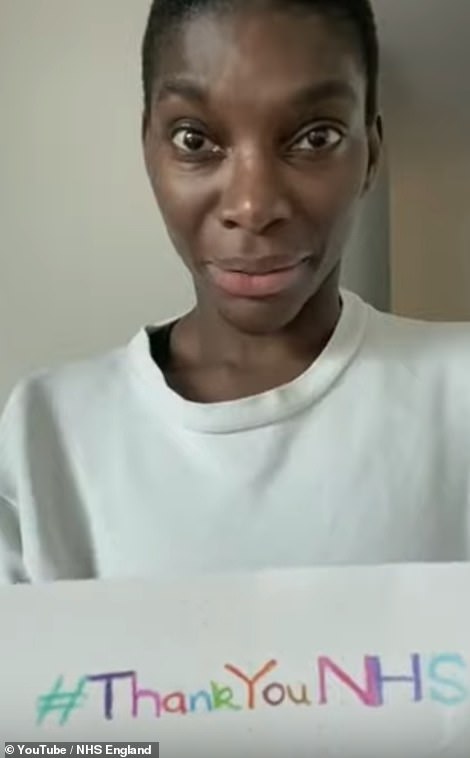 Despite his continued self-isolation after he contracted Covid-19, Prime Minister Boris Johnson again was seen clapping at the door of Downing Street.

Fireworks were set off across Newcastle’s city centre and drivers used their cars horns to sound their thanks in Tooting, south London. In Glasgow, bagpipes played Scotland The Brave as residents clanged pots and pans in appreciation. At least five frontline health workers are known to have died after contracting Covid-19.

The initiative follows similar moves in Italy and Spain – which have the world’s highest death tolls – which created astonishing scenes over the last month as they applauded from terraces in the countries’ cities.

This is while in New York, many people have made the clapping part of their every day routines, with social media videos showing people clapping every night at 7pm local time for key workers. 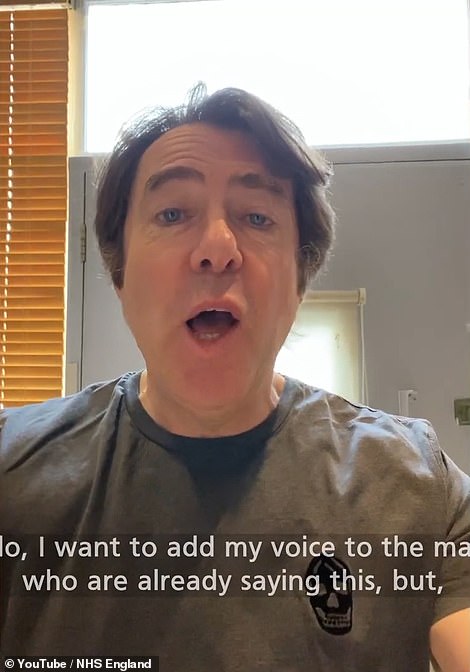 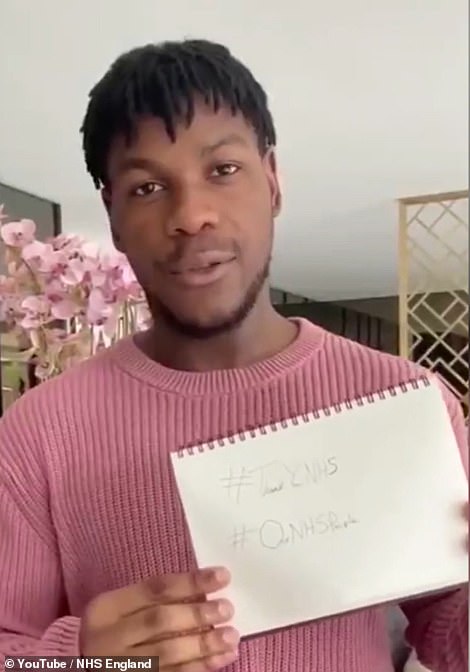 Significant: While many said ‘thank you’, presenter Jonathan Ross (L) elaborated: ‘Hello, I want my add my voice to the many who are already saying this, but a profound and sincere thank you for what you’re doing’ (John Boyega pictured right)

Last week, Boris ordered the immediate closure of all non-essential shops and threatened people with fines or even arrest if they do not ‘stay at home’ amid the global crisis.

The shutdown will last for a minimum of three weeks and the UK’s new state of emergency is unprecedented in modern history.

Gatherings of more than two people have been banned in the most dramatic curbs on freedom ever seen in Britain in time of peace or war, as the government goes all out to stop the spread of the killer disease.