Northern Ireland’s rowing political parties will meet for talks for the first time in more than a year, it was revealed today.  An agreement has been reached to hold a string of meetings next month, Prime Minister Theresa May and Irish Taoiseach Leo Varadkar have said in a joint statement. Power-sharing talks between failed last time in

Northern Ireland’s rowing political parties will meet for talks for the first time in more than a year, it was revealed today.

An agreement has been reached to hold a string of meetings next month, Prime Minister Theresa May and Irish Taoiseach Leo Varadkar have said in a joint statement.

Power-sharing talks between failed last time in a row over Sinn Fein’s wish for an Irish language act and the DUP’s opposition to same-sex marriage.

The news of summit, two years after the Stormont Assembly collapsed and 15 months since proper talks, came days after the funeral of Lyra McKee, whose murder by the New IRA increased pressure on leaders to break the political deadlock.

At her funeral a priest sparked a standing ovations when he demanded to know why it had taken the horror of her death to unite politicians and urged them to protect the Good Friday agreement.

Security officials have repeatedly warned that political drift in Northern Ireland – along with uncertainty around Brexit – could embolden those bent on reviving violence.

Arlene Foster yesterday denied Miss McKee was murdered because of the ‘political vacuum’ in Northern Ireland. 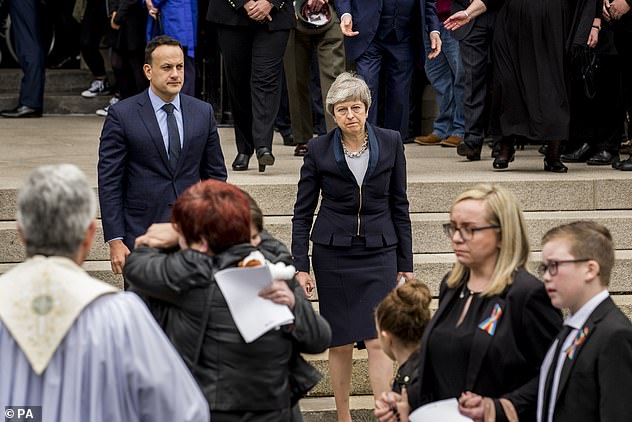 Taoiseach Leo Varadkar and Prime Minster Theresa May, pictured in Belfast this week, have announced talks in Northern Ireland to restore the Stormont Assembly will start after the local elections in the UK 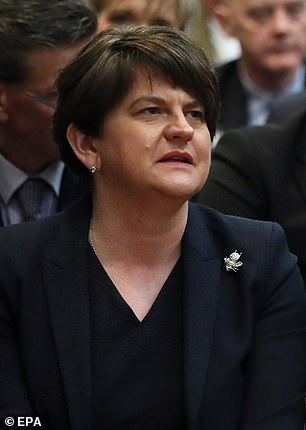 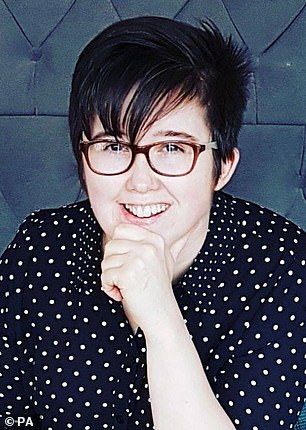 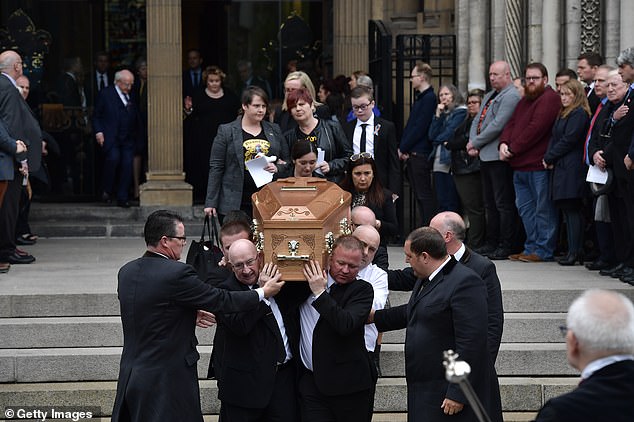 The coffin of journalist Lyra McKee is taken out of the church after the funeral as Lyra McKee’s partner Sara Canning (behind, L) follows

The DUP leader looked uncomfortable as Mrs Foster sat next to Sinn Fein leaders Michelle O’Neill and Mary Lou McDonald at the Protestant St Anne’s Cathedral in Belfast, and they were also forced to stand and clap.

Father Martin Magill received a spontaneous standing ovation as he called her senseless killing a ‘huge injustice’ and said he ‘dared to hope’ something so awful as Lyra’s murder could be a ‘doorway to a new beginning’.

Mrs Foster said today ‘I don’t accept that the violence that caused Lyra’s death was caused by a political vacuum. It was caused by people who wanted to use violence to further their own warped political agenda. That’s why Lyra is dead’.

She also said she sympathised with Lyra McKee’s partner, but said the party’s stance on gay marriage will not change. 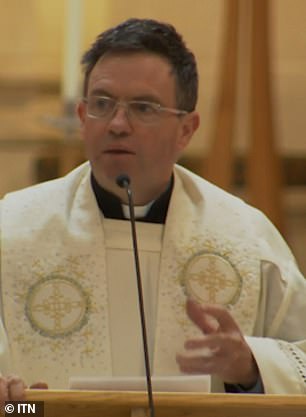 Priest Father Martin Magill told mourners: ‘I commend our political leaders for standing together. Why in God’s name does it take the death of a 29-year-old woman with her whole life in front of her?’

She told RTÉ’s Morning Ireland: ‘We have a long standing policy which hasn’t changed. That remains the position of the party.

‘That doesn’t mean I cannot sympathise and empathise with Sara and say to her that we feel her love. Her loss was all of our loss because this was a young woman who was doing great things in journalism and living her life in a city that she adopted.

‘You shouldn’t conflate the two issues of empathy and sympathy and a political issue which is the definition of marriage.’

Father Martin Magill said yesterday he ‘dared to hope’ something so awful as Lyra’s murder could be a ‘doorway to a new beginning’.

He said: ‘Since Thursday night we have seen the coming together of many people in various places and the unifying of the community against violence. I commend our political leaders for standing together in Creggan on Good Friday.’

He then added: ‘I am, however, left with a question: ‘Why in God’s name does it take the death of a 29-year-old woman with her whole life in front of her to get us to this point?’

Miss McKee was gunned down while observing rioting in Londonderry. She was standing next to a police patrol when she was struck by a bullet. The New IRA terrorist group has confessed that its members killed her.

Yesterday’s congregation included politicians from across Ireland’s political divide, including the heads of Sinn Fein and the Democratic Unionist Party, whose power-sharing deal has broken down, leaving Northern Ireland without a working government.

Miss McKee’s family – who are Catholic – said they chose the cathedral for the funeral because of its reputation as a ‘shared space’ in the divided city.

Theresa May, who missed Prime Minister’s Questions to attend the two-hour service, sat in the front row on one side of the cathedral, flanked by Irish president Michael D Higgins and Irish prime minister Leo Varadkar. Jeremy Corbyn sat a couple of rows behind.

Father Magill also called on Miss McKee’s murderers to follow her example of ‘the pen is mightier than the sword’.

He quoted a friend of Miss McKee’s who said: ‘We have had enough. There is a younger generation coming up in the town and they don’t need guns put in their hands. They need jobs, they need a better health service and education. They need a life.’

As the 1,000-strong congregation broke into applause, Father Magill addressed her killers, saying: ‘I plead with you to take the road of non-violence to achieve your political ends.’ 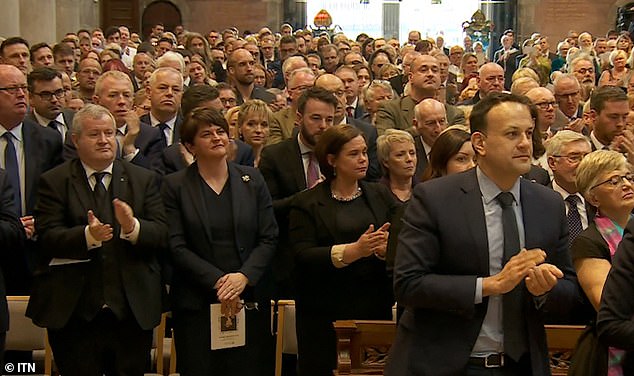 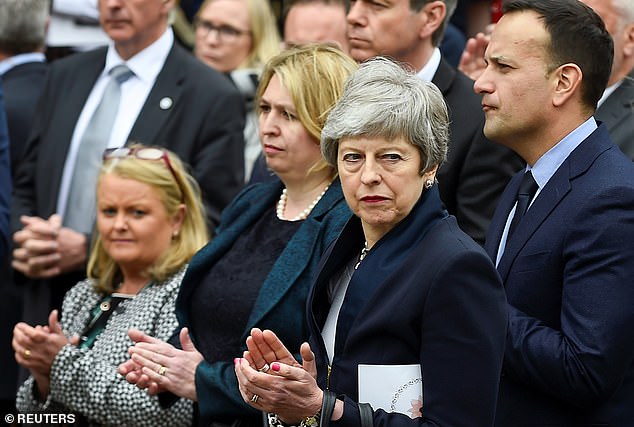 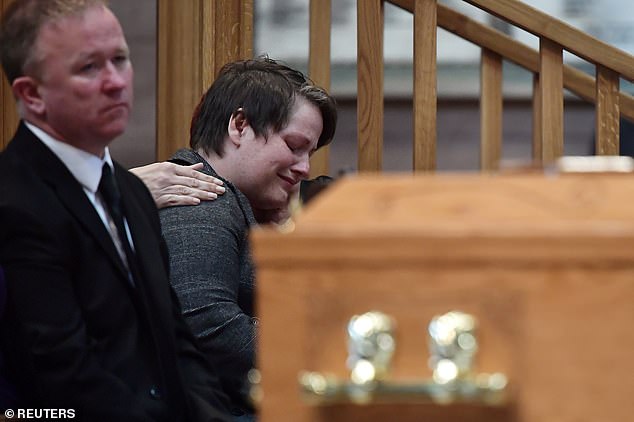 Miss McKee’s partner Sara Canning, 35, cries at the service of thanksgiving for the life of the 29-year-old journalist. Mrs Foster said the DUP’s stance on gay marriage remains unchanged

Arlene Foster today repeated her call to get talks on restoring the devolved institutions back up and running again as soon as possible. Her republican counterparts said they needed a ‘sustainable’ agreement.

Mrs Foster said Sinn Fein could not get everything it wanted, ‘a 5-0 victory’, and her party receive nothing.

On Wednesday, Fr Martin Magill challenged politicians as to why it had taken the death of 29-year-old Lyra McKee to unite them, at her funeral.

Mrs Foster told Radio Ulster’s Good Morning Ulster programme: ‘We are now a year and a half forward, there is a huge frustration in our society.

‘I think it is an eminently reasonable thing to suggest, dealing with the normal day-to-day things in the Assembly whilst dealing in a separate process with the help of our Government to dealing with the issues which Sinn Fein want to raise.’

Sinn Fein feels that would be a false start without dealing with the underlying issues first.

The DUP leader said: ‘That is putting their demands above the demands of the people of Northern Ireland.

Sinn Fein leader Mary-Lou McDonald has said her party is ready to play a full part in a ‘serious and meaningful’ talks process.

Her party is seeking guarantees around the place of the Irish language and changes to the law on same-sex marriage.

Sinn Fein negotiator Conor Murphy repeated his assertion that the DUP leadership had previously reached an agreement and was unable to sell it to its grassroots. 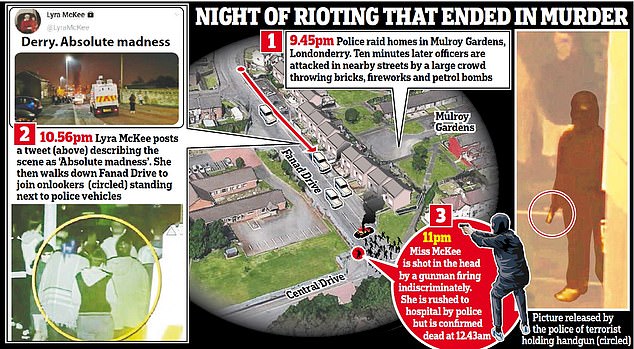 A map which shows the timings of the riots in Londonderry. Miss McKee was shot in the head by a gunman firing indiscriminately at police

He told the BBC that Sinn Fein’s conditions were those imposed by the 1998 Good Friday Agreement.

‘We want a sustainable agreement, one which keeps an Executive in place, not a quick fix which gets us up one week and brings us down the next.’

Miss McKee’s death on the republican Creggan housing estate came as a mob threw fireworks and petrol bombs as they rioted in the streets on Thursday night. Miss McKee’s mother Joan, 68, brothers Gary, 47, and David, 41, sisters Joan Hunter, 46, Nichola Corner, 44, and Mary Crossan, 39, sat in the front row of the other side of the cathedral. They were joined by other relatives including Miss McKee’s great-niece Ava, four, and the partner she had hoped to marry – Sara Canning, 35. Mrs Corner told the congregation how the death of ‘our wee Lyra’, the youngest of the six siblings, will leave an ‘unfillable hole in our mum’s life’.

But she hoped her sister’s lasting legacy would lead to people trying to create a world where ‘labels are meaningless’, where ‘every single person is valued’ and ‘where every single child gets the chance to grow up and to make their dreams come true’.

Quoting Miss McKee herself, Mrs Corner said: ‘We must change our own world one piece at a time. Now let’s get to work.’

Many friends of Miss McKee, who was a campaigner for LGBT rights, wore Harry Potter-themed T-shirts, scarves and badges to the service in honour of her lifelong love of JK Rowling’s books.

Outside, a crowd of several hundred people applauded as it was driven away for a private burial in a hearse with rainbow-coloured flowers on its roof which spelled out the words ‘Team Lyra’.