May must consider a customs union if MPs vote for it, senior minister says

The Justice Secretary today said that Britain is in a ‘national crisis’ and told the Prime Minister she must consider a customs union if MPs vote for it tomorrow. David Gauke told Andrew Marr that if MPs vote ‘in favour of a softer Brexit, then I don’t think it’s sustainable to ignore parliament’s position.’ He blamed

The Justice Secretary today said that Britain is in a ‘national crisis’ and told the Prime Minister she must consider a customs union if MPs vote for it tomorrow.

David Gauke told Andrew Marr that if MPs vote ‘in favour of a softer Brexit, then I don’t think it’s sustainable to ignore parliament’s position.’

He blamed Brexiteer rebels for the impasse, deepening Cabinet divisions. Both wings of the Cabinet have reportedly threatened resignations.

Tomorrow MPs could recommend customs union membership in a second round of ‘indicative votes’. That proposal, and another for a ‘confirmatory’ second referendum on whatever deal is passed, proved the two most popular proposals last Wednesday.

It comes as Tory deputy chairman James Cleverly admitted the party was engaged in ‘sensible and pragmatic planning’ for a snap general election, after the PM warned MPs darkly on Friday, when her deal was voted down for a third time: ‘I fear we are reaching the limits of this process in this house.’

She has repeatedly sworn she will not negotiate for a Brexit which contradicts her 2017 election manifesto.

But with an opinion poll last night putting Labour up five points on 41 per cent and the Conservatives down seven to 36 per cent, the government chief whip Julian Smith said he was opposing plans for a snap poll with ‘every sinew in his body’.

Ex-Prime Minister Sir John Major warned Mrs May against calling an election to end the impasse and said the country may need a time-limited ‘national government’ including both Tory and Labour politicians. 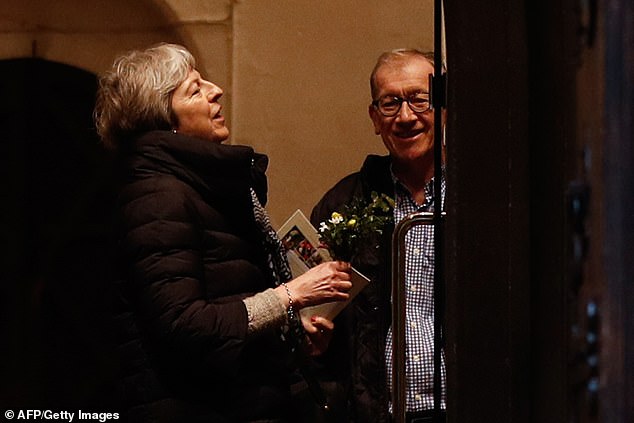 Amid the impasse – less than two weeks before Britain faces crashing out with No Deal – Mr Gauke told the BBC’s Andrew Marr ‘we would have to consider very closely what parliament decides to do’.

He said: ‘I would rather leave the customs union but we also have to recognise that my party does not have the votes to get the manifesto commitment through the Commons.

‘Sometimes you have to accept your second or third choice.’

Mr Gauke explicitly blamed Tory rebels, telling Marr Britain was in this situation because ‘too many colleagues’ were not backing the deal. 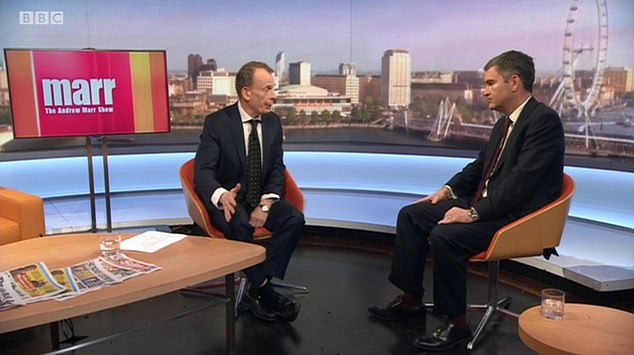 Mr Gauke’s (pictured today on Marr) warning comes ahead of a second round of ‘indicative votes’ tomorrow night on alternatives to Mrs May’s Brexit deal. A customs union was a leading contender in the first round last week – but was still defeated by a majority

Amid claims he would resign if Mrs May ignored Parliament and switched to No Deal, Mr Gauke added: ‘I just don’t think the British people would thank us if we left without a deal and we said we were just following the referendum result.’

Work and Pensions Secretary Amber Rudd, Chancellor Philip Hammond, Justice Secretary David Gauke and Business Secretary Greg Clark are all urging Mrs May to accept a customs union – with the implicit threat that they will resign if she does not.

But Cabinet Brexiteers, orchestrated by Commons Leader Andrea Leadsom, are implacably opposed and are likely to quit if Mrs May starts to negotiate membership of a customs union with the EU.

The pressure has been ramped up by the letter sent by 170 Brexit-supporting Conservatives demanding the UK leaves the EU on April 12 ‘with or without a deal’.

There are reports the letter was signed by Cabinet Ministers including Andrea Laadsom, Sajid Javid, Jeremy Hunt and Michael Gove.

There are just days to resolve the impasse with No Deal currently due on April 12.

A long extension to Brexit could be agreed by the EU at an emergency summit on April 10 –  but it will only happen if Britain agrees to hold EU elections and has a clear plan. 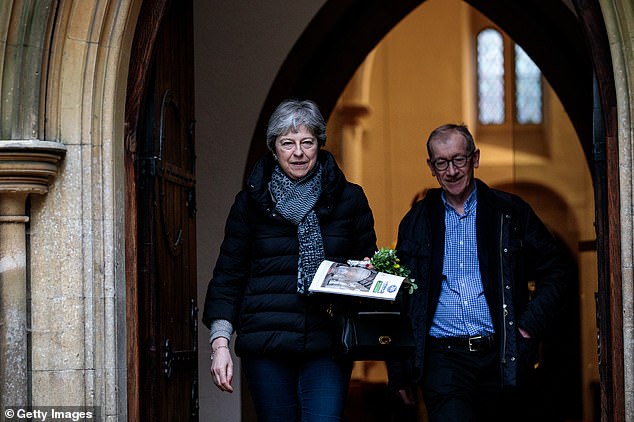 Jeremy Corbyn would be poised on the threshold of Downing Street if Theresa May (pictured today at church in Maidenhead) called a General Election, a Mail on Sunday poll found 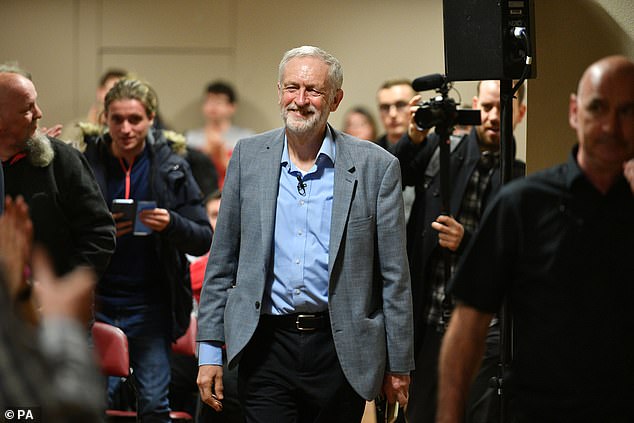 Although Mr Corbyn would be 19 seats short of a majority, it would leave him in pole position to enter No 10 if he could strike an deal with the Scottish Nationalists

As Tories acknowledged they were preparing for the possibility of a general election, a poll gave Labour a five point lead.

If repeated at an election, Labour would be on course to win 307 seats, while the Conservatives would claim just 264.

Although Mr Corbyn would be 19 seats short of a majority, it would leave him in pole position to enter No 10 if he could strike an deal with the Scottish Nationalists.

When the 11-strong Independent Group of Labour and Tory MPs is included in the poll choices, Labour is still ahead, on 35 per cent, with the Tories on 32 per cent and the new group – now called Change UK – on nine per cent.

But one Labour MP told MailOnline that talk of an election was ‘going down like a bucket of cold sick’ on both sides of the house.

The MP said only a handful of Labour MPs close to the leader welcomed a general election. 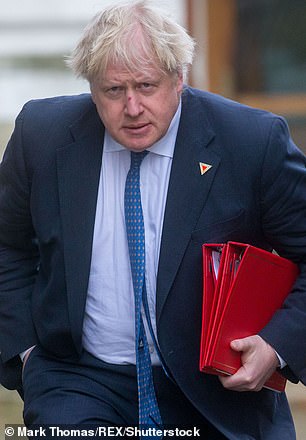 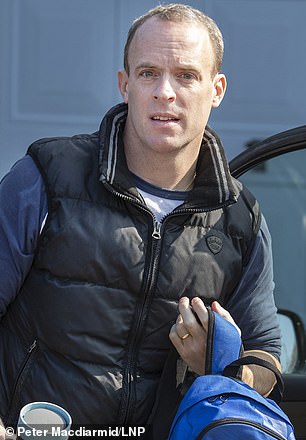 Former Brexit Secretaries Boris Johnson, left, and Dominic Raab, right, are contenders for the Premiership when Theresa May stands down 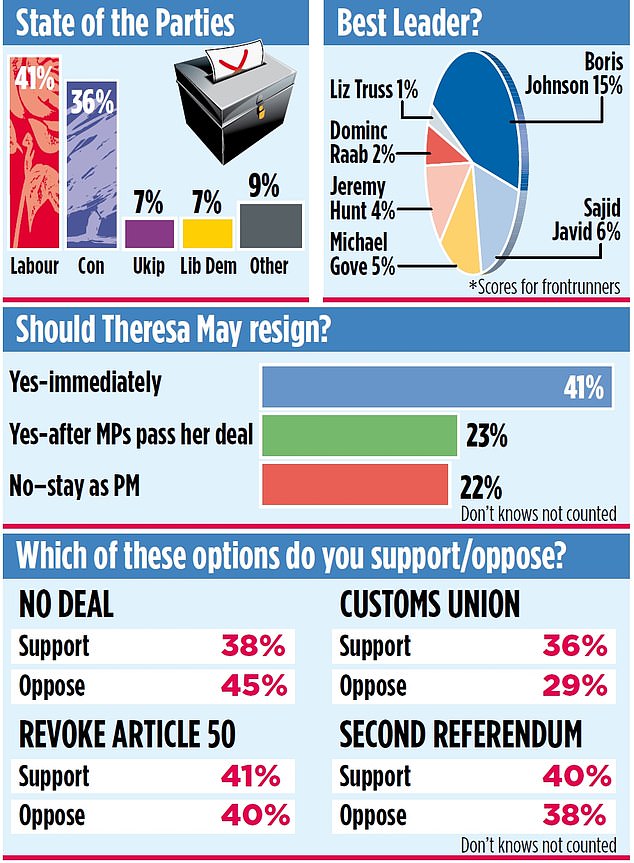 Jeremy Corbyn would be poised on the threshold of Downing Street if Theresa May called a General Election, an exclusive Mail on Sunday poll has found

Tory leadership hopefuls are also jockeying ever more publicly to replace Mrs May, who announced her intention last week to step down once this phase of Brexit is complete.

Boris Johnson, sporting a tidier haircut and significant weight loss, called on the PM to quit this week after she lost another meaningful vote and his fellow former Brexit Secretary Dominc Raab today hit back at ‘smears’ claiming he had bullied officials.

Liz Truss, chief secretary to the Treasury, set out her stall for the top job with an interview in which she called for Tories to use the ‘vast majority’ of a £27bn Brexit war chest to ‘slash taxes’.

A Mail on Sunday poll shows Boris enjoys a clear lead among the electorate in the race to succeed Mrs May as Tory leader, with more than twice the level of support of his closest rival, Home Secretary Sajid Javid.

Environment Secretary Michael Gove is the next most popular, followed by Foreign Secretary Jeremy Hunt, Dominic Raab, and Liz Truss.

But Conservative chairman Brandon Lewis has told friends that if Mrs May survives the coming weeks, then Downing Street hopes to delay the final stages of the contest until the gathering in Manchester – in the hope it will deprive Mr Johnson of an immediate ‘Brexit bounce’ if Britain has left the EU.

Allies of Mrs May believe that a long contest would offer the best chance for the leadership to skip a generation, allowing a ‘dark horse’ candidate such as Tom Tugendhat, James Cleverly or Mark Harper to surge through the ranks.

The shadow foreign Secretary accused Theresa May of being ‘out of control’, warning the ‘time may come’ when Labour makes a second attempt to force a general election.

Emily Thornberry said the Prime Minister was ‘not listening’ to Parliament after reports she is planning to bring her vote back to the Commons yet again, despite its third rout on Friday.

Ms Thorberry said: ‘Even with just days to go she is just saying ‘It is my deal or no deal’. That is not meaningful, that is not democracy.

‘That is Theresa May stamping her feet and saying ‘I want this, no one else is allowed to do anything.

‘No wonder she is in trouble. She is out of control. She is not listening to anyone. No one knows what it is that she is going to do next.

‘I think her judgment has been undermined.’

Labour called and lost a motion of no confidence in the Government in January but could make a second attempt in days. Losing would start a two-week countdown to a General Election unless an alternative government could be formed.

But Labour and Opposition MPs can only win a vote if some Conservative MPs switch sides and vote against their own party. Some Brexiteer Tories have hinted they could do so to block the deal, while Remain Tories have warned they might to avoid No Deal.

Ex-PM Sir John Major said this morning the situation should be taken over by a national government to resolve the crisis.

He told Andrew Marr: ‘We may be driven to a national government.’

Sir John added that ‘whomsoever is Prime Minister’ would invite figures in from other parties to form a ‘time-limited unity Government’.

Outlining how to approach the Brexit issues, Sir John told BBC1’s The Andrew Marr Show: ‘If we have a general election in the autumn, which I think is possible not certain, and we don’t get a government with a clear majority then I think it would be in the national interest to have a cross-party government so that we can take decisions without the chaos that we’re seeing in Parliament at the moment where every possible alternative is rejected.’

Asked for his advice to Mrs May about whether or not she should call an election this week, Sir John replied: ‘Don’t. I mean don’t for a whole range of reasons.

‘The Prime Minister is blocked in on every side, I utterly can empathise with her frustration but I think a general election will solve nothing at this moment.’ 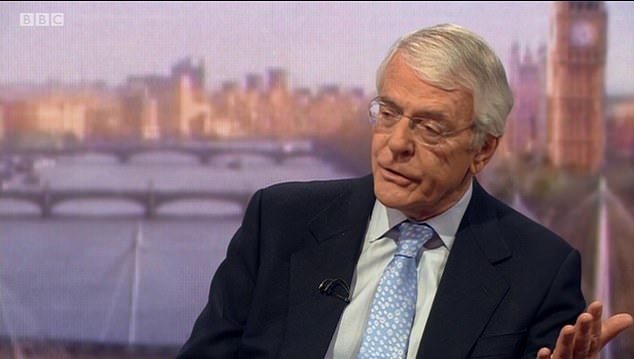