Netflix fans say YOU is even creepier without Joe’s narration

‘This is the version we SHOULD have watched!’ Netflix fans go wild over clip from You that has had Joe’s narration removed – insisting the show is even CREEPIER without his voiceover Netflix’s You premiered in December and took over social media with people expressing their opinions about Penn Badgley’s character, Joe On Monday, Netflix

‘This is the version we SHOULD have watched!’ Netflix fans go wild over clip from You that has had Joe’s narration removed – insisting the show is even CREEPIER without his voiceover

Netfix released a version of You without the voiceover of Penn Badgley as Joe, and it has left fans seeing the character in a creepier light than before.

The thriller series, which premiered on Netflix in December after first airing on Lifetime, includes voiceovers from cyberstalker and murdering boyfriend Joe so the viewers can have insight inside his mind.

But Netflix decided to debut a clip from the series on Monday without Joe’s voiceovers to show just how creepy the character was acting throughout the show. 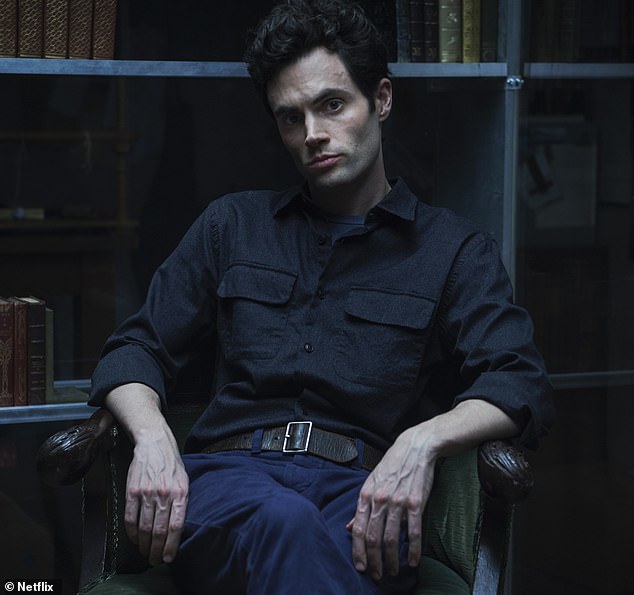 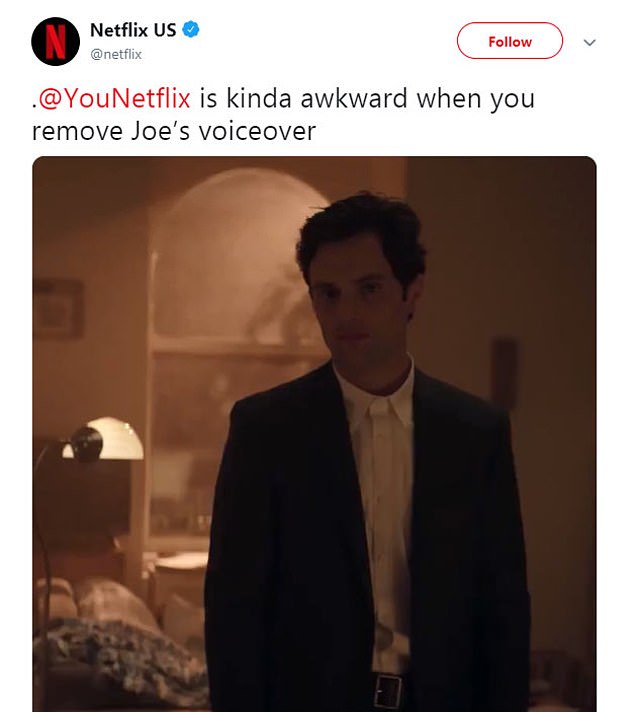 Hilarious: The series incorporated voiceovers from Joe to explain his thought process while he cyberstalked and murdered people, but Netflix decided to take those out in a hilarious clip

Awkward: Viewers were in agreement there was a lot of uncomfortable silence in the scenes without Joe’s narrations being incorporated in

True: Another viewer pointed out how the scenes should be awkward regardless because of Joe’s stalker tendencies

Funny: One fan noticed how there were moments Joe was busy focusing on his own thoughts that he didn’t speak to his girlfriend, Beck

‘@YouNetflix is kinda awkward when you remove Joe’s voiceover,’ the streaming site tweeted.

The clip showed a couple of prominent scenes from the series that included long strands of conversation going on in Joe’s mind. But without the voiceovers, it appeared Joe was sitting in awkward silence for uncomfortable lengths of time.

During the clip, the video jokingly states: ‘For someone so obsessed with keeping a relationship alive, Joseph…there’s a lot of dead air.’

‘Wow awkward silence is right,’ one viewer commented on the Netflix clip. ‘Thanks for pointing that out.’

Viewers couldn’t get over how different the series was when Joe’s voiceover was not incorporated into the scene.

Instead, it just showed how much silence was between him and the characters around him.

‘Joe was so busy narrating in his own d*** mind he forgot to talk to her,’ a viewer wrote.

Fair point: Despite Joe’s horrible character traits, some people admitted to being attracted to him. But a viewer pointed out that those crushes might not have developed in the new version

Uncomfortable: People found the new clip released by Netflix to be awkward and uncomfortable

All in the acting: It was noticed that Badgley had to stand a lot in silence during his scenes because of the narrations added in

Hilarious: People felt they were experiencing ‘secondhand embarrassment’ from the scenes without the voiceovers 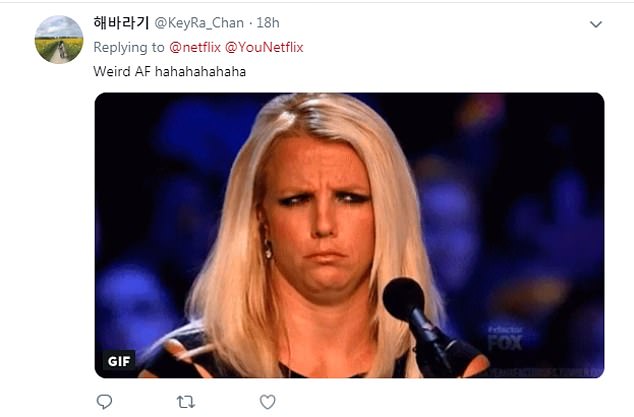 Not having it: A majority of people thought the clip was strange without the narrations

Another fan pointed out that the scene should be awkward whether there is a voiceover or not because of who Joe is as a person. ‘It’s awkward anyway he’s a stalker,’ the viewer wrote in a tweet.

An issue people had with the series was some viewers’ strange attraction to Joe despite his obvious character flaws, such as feeling the need to kill people associated with his girlfriend.

Fans thought Joe without voiceovers helped sell the creepy factor of the character so people wouldn’t feel attracted to him.

‘This is the version we should have watched so no one would have developed a crush on Joe,’ one fan wrote. ‘We would have seen how creepy and awkward he really is.’

Netflix’s You and the character of Joe is anticipated to return for a second season after the positive response from viewers about the thriller show.