British Olympic cycling legend Sir Bradley Wiggins and his wife Cath have announced this evening that they are separating after 16 years of marriage.  The Olympian, 40, tweeted: ‘It is with deep sadness my wife Cath and I have decided to separate. Our two children remain our priority and we ask for privacy at this

British Olympic cycling legend Sir Bradley Wiggins and his wife Cath have announced this evening that they are separating after 16 years of marriage.

The Olympian, 40, tweeted: ‘It is with deep sadness my wife Cath and I have decided to separate. Our two children remain our priority and we ask for privacy at this time. Brad & Cath.’

The couple have two children together and live in a 1970s barn conversion in an Area of Outstanding Natural Beauty – the Trough of Bowland, north of Preston.

They first met in 1997 before reconnecting at the 2002 Commonwealth Games.

Sir Bradley has previously told how doping allegations against him two years ago had a huge impact on his marriage and ‘almost killed’ his wife, forcing her to check into rehab. 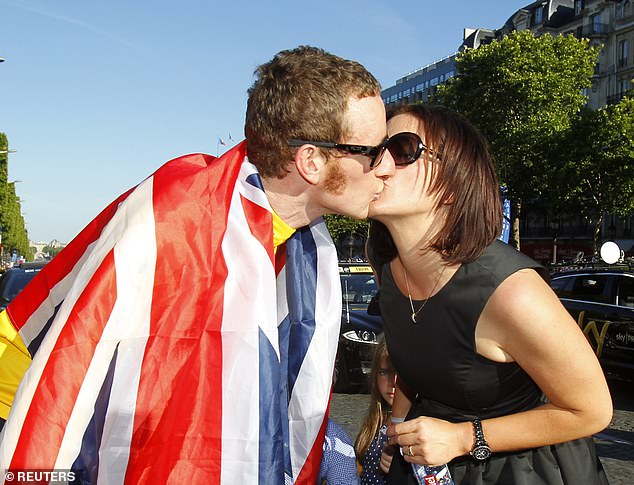 Sir Bradley Wiggins and his wife Cath, pictured kissing in 2012 at his victory in the Tour de France, last night sadly announced that they are to separate after 16 years of marriage 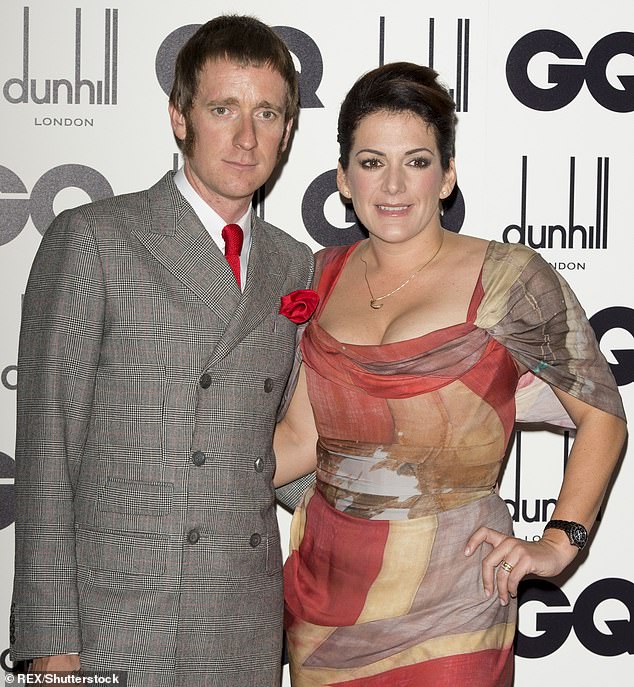 Sir Bradley enjoyed a hugely a successful career as a cyclist, becoming the British athlete with the most Olympic medals ever at the Rio games in 2016.

However, his reputation took a hit over allegations he received banned substances which emerged when Russian hackers released documents in 2016 showing Wiggins had been given permission to use a banned corticosteroid before three races.

And a devastating report by a parliamentary Digital Culture Media and Sport select committee, released in March 2018, stated Wiggins used the controversial drug triamcinolone to enhance his performance, not for medical reasons.

He has denied any wrongdoing but admitted it had a significant impact on his family life.

Speaking to the Guardian in 2018, he said: ‘People have free rein to put their own facts in place. Kids read headlines and their parents say things about you.

‘Then the BBC show up on your doorstep and you can’t take your kids to school. You tell the BBC, ”I can’t talk to you, because there’s an investigation.” 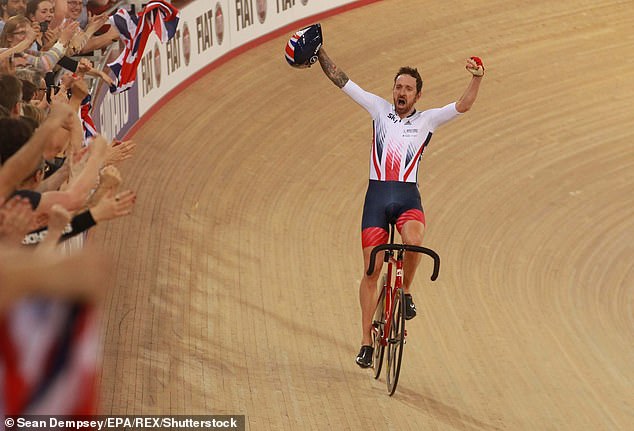 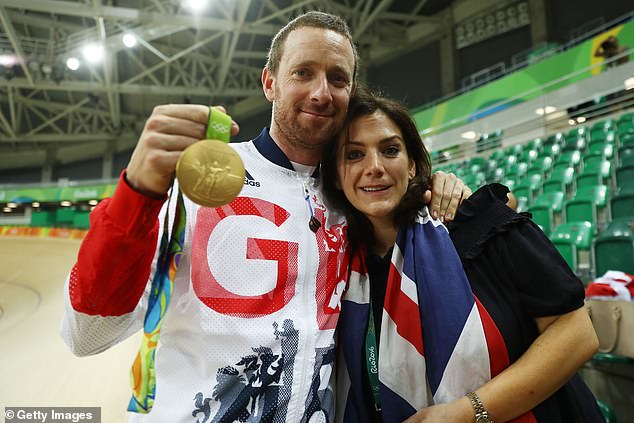 Sir Bradley Wiggins and his wife Catherine, pictured posing with a Gold medal Gold at the Rio 2016 Olympic Games. The couple have now announced their divorce 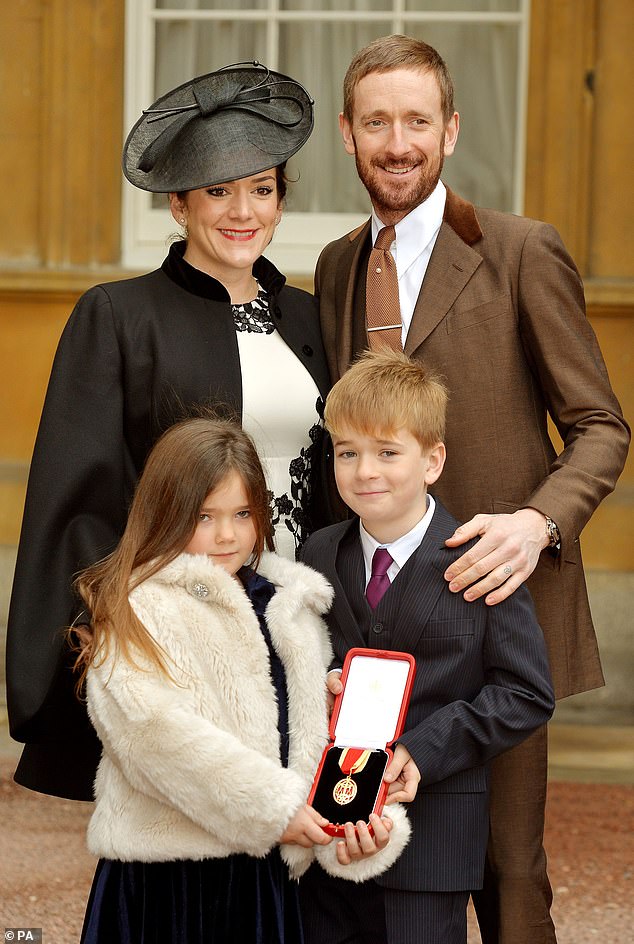 Sir Bradley said the strain of the drug taking allegations also took a toll on his family life, including wife Cath and their two children 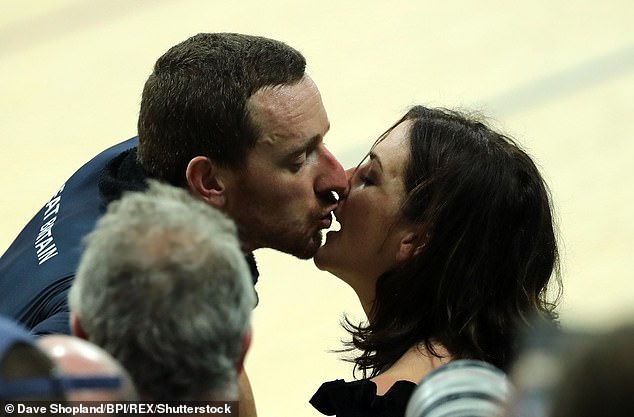 ‘They just want to know about the packages. The whole thing becomes an uncontrolled trial by media. In any other court it would be thrown out because the media have skewed the facts.

‘You watch your family suffer, and it’s terrible. It nearly killed my wife. She ended up in rehab over it. I’m at home having to deal with it.

‘Because she’s bi-polar she has this fear of shame, people watching her all the time.

He added: ‘What I should have done is murder someone because then I’d have had proper rights. I’d have had more rights as a murderer.

‘There’d have been no articles and I’d have had a fair trial. I’d have been cleared or found guilty. Not somewhere in the middle where you can’t find any evidence of wrongdoing.’

UK Anti-Doping closed its 14-month investigation after they were unable to find enough evidence that a Jiffy bag Sir Bradley received contained a banned substance.

Sir Bradley claimed his life was made a ‘living hell’ because of the ‘malicious witch-hunt’.

He is now studying for a degree in social work as he moves beyond his cycling career.

He told the Big Issue last year: ‘I don’t give a s**t about my cycling career now, I’m just detached from it, I don’t want to live off the back of it.

His move into social work is motivated by his tough childhood, he said: ‘Those horrific things I saw when I was growing up… nothing can shock me now, and I want to use that mental toughness working as a social worker.

His wife was also forced to apologise after she branded his rival cyclist Chris Froome a ‘slithering reptile’ and accused Team Sky of sacrificing her husband to protect their star rider.

Wiggins and Froome fell out when they were Sky team-mates at the 2012 Tour de France and in the past their wives, Cath Wiggins and Michelle Froome, have clashed on social media.

The acrimony resurfaced in spectacular fashion when Mrs Wiggins responded to the news that Froome had failed a drugs test in September 2017 and was facing a potentially ruinous doping ban.

She said: ‘I am going to be sick,’ she wrote. ‘Nothing in the news. If I was given to conspiracy theory I’d allege they’d thrown my boy under the bus on purpose to cover for this slithering reptile.’

She later apologised and deleted her comments.