Penny Mordaunt said she was looking forward to ‘working with some amazing people’ on her first day full day as the first female Defence Secretary today. The 46-year-old Portsmouth MP was installed last night after Gavin Williamson was dramatically booted out of the Government over a leak involving Chinese media giant Huawei.  Leaving her London

Penny Mordaunt said she was looking forward to ‘working with some amazing people’ on her first day full day as the first female Defence Secretary today.

The 46-year-old Portsmouth MP was installed last night after Gavin Williamson was dramatically booted out of the Government over a leak involving Chinese media giant Huawei.

Leaving her London home this morning she said: ‘I’m looking forward to my first full day and working with some amazing people.’

Ms Mordaunt, a Royal Navy reservist and former Armed Forces minister, has a tough brief because the Treasury is eyeing cuts in the defence budget.

Looming decisions include how to fund new equipment for troops and how to plug a multi billion-pound back hole in the MoD’s finances caused by hugely expensive programmes like replacing the Trident nuclear deterrent. 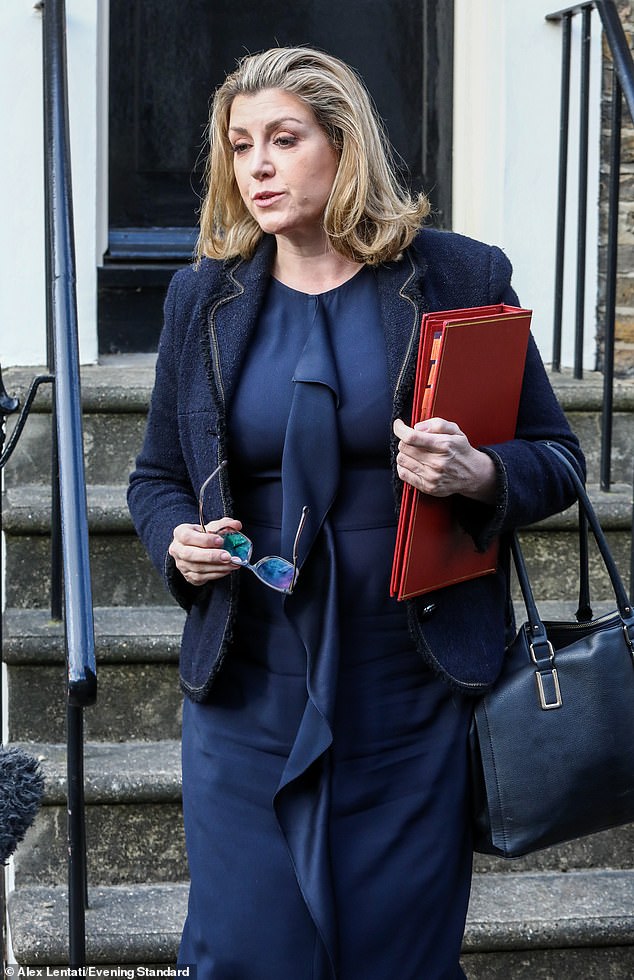 Ms Mordaunt leaving her London home today. She said she was ‘looking forward to my first full day and working with some amazing people’ 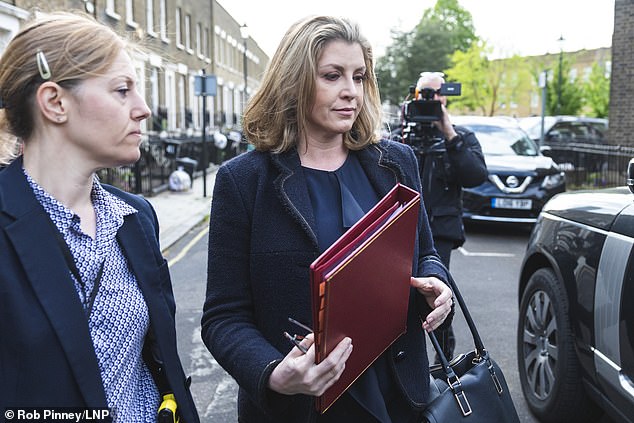 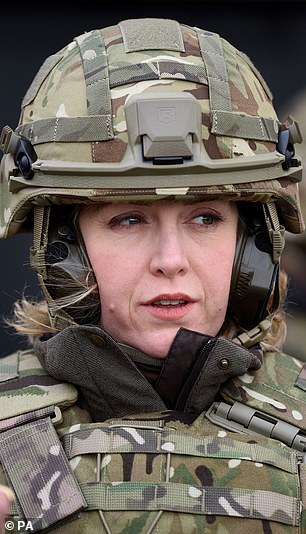 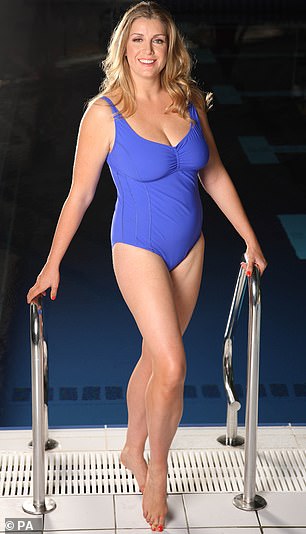 Ms Mordaunt became the first female UK defence minister when she was appointed Armed Forces Minister in 2015 (left)  – a year after appearing ob television in a swimsuit in ITV diving reality show Splash!

However the politician showed her fun side after becoming an MP in 2010 by famously donning a swimsuit to take part in Splash!, a 2014 reality TV show about high-diving hosted by Top Daley.

She also created headlines – and was accused of trivialising Parliament – after repeatedly saying the word ‘c*ock’ in the Commons after losing a bet with fellow reservists the same year.

Penny Mordant inherits a battle between her new department and the Treasury over cash for Britain’s military.

The Armed Forces have a multi billion-pound back hole in their finances caused by hugely expensive programmes like replacing Trident.

Last year a scathing report revealed  they could be as much as £21billion short of the money needed to buy equipment over the next 10 years.

A Public Accounts Committee investigation said the Ministry of Defence (MoD) ‘simply does not have enough money to buy all the equipment it says it needs’ and accused it of not being clear with politicians or the public about the financial risks it faces.

Its report said there was an ‘affordability gap’ in the MoD’s Equipment Plan for 2017 to 2027, but criticised officials for being ‘unable to determine the size’ of it accurately.

The most conservative estimate was £4.9billion, rising to a worst-case scenario of £20.8billion more than the 10-year £179.7billion equipment budget, they found.

This budget accounts for 40 per cent of the MoD’s planned spending in that period.

Born in Torquay as one of twins, Ms Mordaunt moved with her family to Portsmouth at the age of two.

She suffered heartbreak aged 15 when her teacher mother died from breast cancer.

Educated at a local comprehensive, she worked as a magician’s assistant before studying drama at the Victoryland Theatre School and philosophy at Reading University.

The daughter of a paratrooper-turned-teacher – who named her after warship HMS Penelope – she is a Royal Navy reservist, serving as an acting sub-lieutenant at HMS King Alfred, a Portsmouth naval base.

Mordaunt’s military background and constituency have helped shape her attitude in the Commons.

She has constantly voted in favour of military action abroad, including against Islamic State.

She also backs replacement of the Trident nuclear deterrent, although that is not surprising given that it is a Conservative policy.

She created a stir in January when, as International Development Secretary, she offered to use tens of millions of pounds to built ships to provide humanitarian relief, which could also be used by the Royal Navy.

She claimed the vessels’ dual role – by assisting in military operations when they are not needed as hospital ships in disaster zones – would quell concerns about Britain annual £14billion foreign aid budget.

It would also help the Armed Forces, which have a huge black hole in their budget. 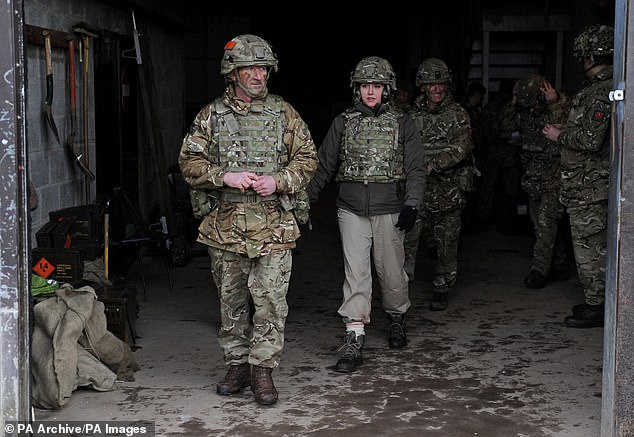 Then Armed Forces Minister Penny Mordaunt (centre) stepping out in uniform to watch live firing exercises at the Sennybridge Training Area in the Brecon Beacons, Wales

Her appointment to International Development Secretary in 2017 was welcomed by aid charities, who said she would be able to draw on her experience working in hospitals and orphanages in Romania as a student after the 1989 revolution.

Last year there was speculation the prominent Leave campaigner might resign over Theresa May’s Withdrawal Agreement.

But her public show of support for the Prime Minister seems to have paid dividends with a promotion from International Development Secretary that is likely to please Eurosceptics.

She retains the job of minister for women and equalities. 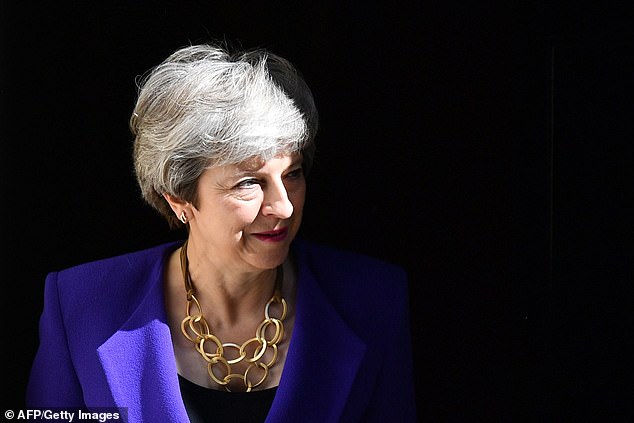 Ms Mordaunt failed in her first attempt at the Portsmouth North seat in 2005, but overturned Labour’s majority to enter Parliament in 2010 and increased her share of the vote in each of the following polls.

She became a junior communities minister in 2014 and was then appointed the first female defence minister for the armed forces in UK history in 2015, and backed Andrea Leadsom in her unsuccessful bid to succeed Mr Cameron in 2016.

She was appointed minister for disabled people when Theresa May took power in 2016.

She was Conservative head of youth under Sir John Major and worked in William Hague’s press office during his leadership, as well as in the 2004 election campaign of US president George W Bush.

She also made a career in communications, business and charity, becoming director of Diabetes UK.