One of Britain’s first coronavirus vaccine volunteers reveals side effects

One of the first Britons to sign up for the coronavirus vaccination scheme has spoken about the symptoms he’s expecting as the trial starts today. Simeon Courtie, speaking to Good Morning Britain from Oxfordshire, said he was expecting to catch a fever ‘at worse’ as he stepped forward to help find a cure to the

One of the first Britons to sign up for the coronavirus vaccination scheme has spoken about the symptoms he’s expecting as the trial starts today.

Simeon Courtie, speaking to Good Morning Britain from Oxfordshire, said he was expecting to catch a fever ‘at worse’ as he stepped forward to help find a cure to the killer disease.

He said: ‘The trials start today but my first vaccination is next Wednesday. They think it will be something along the lines of having the flu. You might just get very mild side effects, but at worst maybe a fever for a couple of days and some aches and pains. 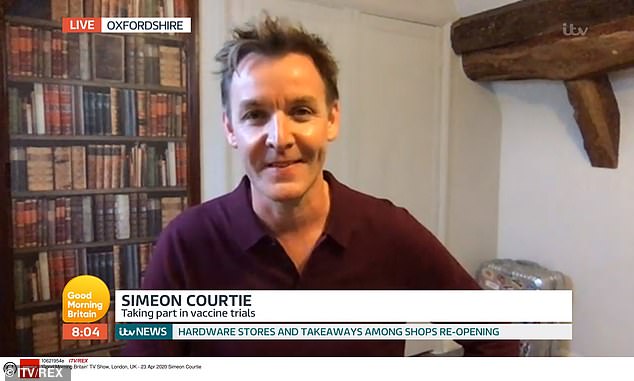 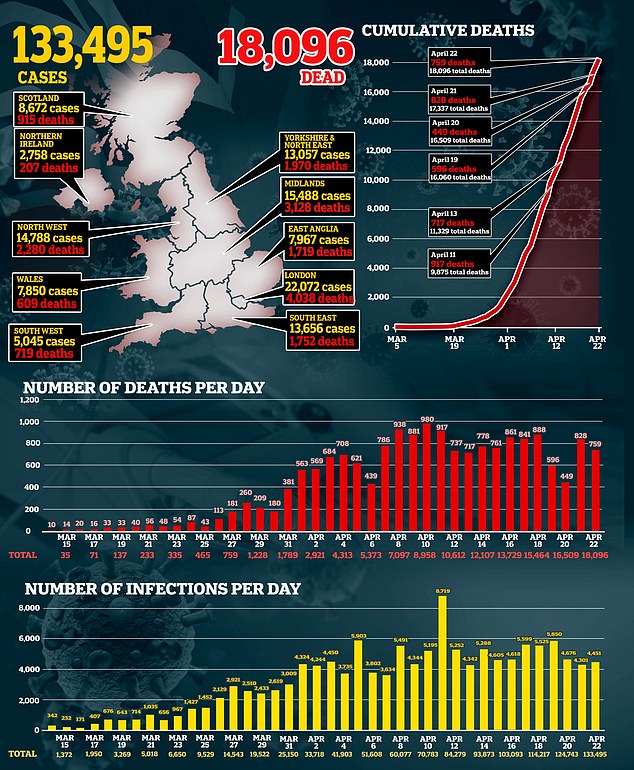 ‘It shouldn’t be too disruptive to my life.’

Mr Courtie explained he was one of hundreds of volunteers taking part in a trial to see if the University of Oxford’s trial was safe. After that has been confirmed it could be used to try and cure patients with Covid-19.

Screening for around 500 people took place at the Jenner Institute near Oxford’s Churchill Hospital.

As well as the vaccination trial in Oxford, there is another being carried out by Imperial College London set to begin later this year.

Mr Courtie described himself as ‘just a very small part of this thing’.

He added: ‘We are the safety part of this process and then after my trial there will be an efficacy trial out in the community to see if it works and that will involve thousands of people.

‘I go on Wednesday to the Jenner Institute and then I’ve got a second vaccination a month after that and then one or two more depending on which group I’m in, because there are different groups in the trial.’

The trial has been split into two groups, those who are being given the vaccine and those who are not. However participants do not know which group they’re in. 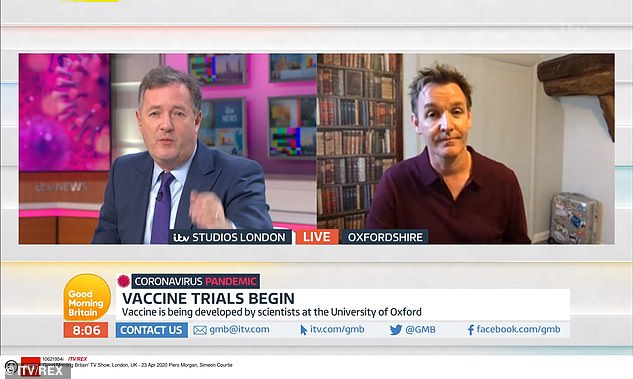 ‘There’s no placebo group where you’re given something like sugar water. You’re either given the new vaccine which they’re developing or a vaccine that’s already licenses, it’s actually the vaccine they give teenagers to protect them against meningits. 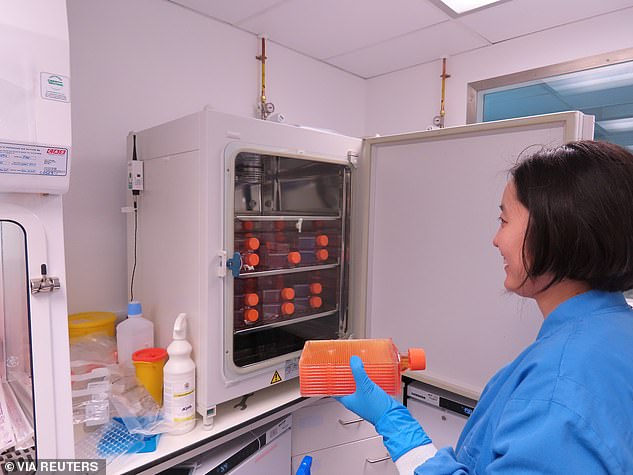 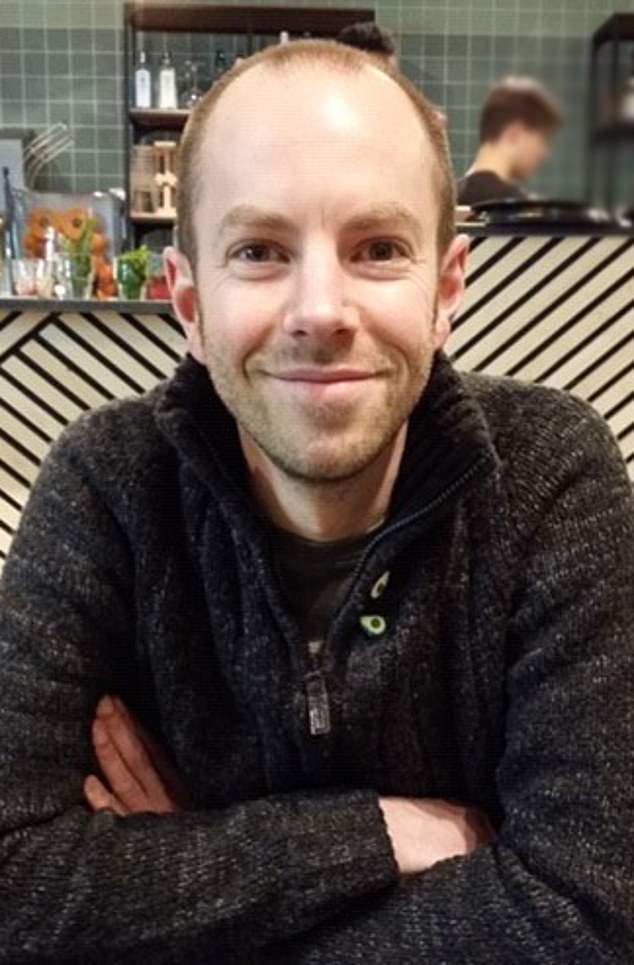 Project manager John Jukes, 36, of Witney, Oxfordshire, denied he was being brave by taking part

He said: ‘I don’t see what I am doing as being heroic at all. I’m in a position to possibly be helpful to lots of people – that’s an opportunity to grab.

‘Nobody is escaping this virus and what it has done to the way we live.

‘If everybody shied away from helping to find a vaccine, then one might not be found.’

He heard about the trial through his partner Rachel White, who is a nurse researching infectious diseases. Volunteers receive no payment apart from compensation for their time and travel costs ranging from £190 to £625.

Mr Jukes said: ‘The trial isn’t free from risk but, then again, anything worthwhile has risk.’

He will get his injection on Monday and says he will go straight back to work. He stressed: ‘The people involved in the trial are the very best. It is so important as it might be the best chance we have of getting back to some kind of normal life, so I really want to help.’

WHAT IS THE DIFFERENCE BETWEEN  VACCINES CREATED BY OXFORD AND IMPERIAL COLLEGE?

The science behind both vaccine attempts hinges on recreating the ‘spike’ proteins that are found all over the outside of the COVID-19 viruses.

Both will attempt to recreate or mimic these spikes inside the body. The difference between the two is how they achieve this effect.

Imperial College London will try to deliver genetic material (RNA) from the coronavirus which programs cells inside the patient’s body to recreate the spike proteins. It will transport the RNA inside liquid droplets injected into the bloodstream.

The team at the University of Oxford, on the other hand, will genetically engineer a virus to look like the coronavirus – to have the same spike proteins on the outside – but be unable to cause any infection inside a person.

This virus, weakened by genetic engineering, is a type of virus called an adenovirus, the same as those which cause common colds, that has been taken from chimpanzees.

If the vaccines can successfully mimic the spikes inside a person’s bloodstream, and stimulate the immune system to create special antibodies to attack it, this could train the body to destroy the real coronavirus if they get infected with it in future.

The same process is thought to happen in people who catch COVID-19 for real, but this is far more dangerous – a vaccine will have the same end-point but without causing illness in the process.

He explained: ‘We are the safety part of this process to see if it’s safe, and after my trial there will be an efficacy trial in the community to see if it works on thousands of people.’

Oxford’s effort is the first British-made vaccine to go into real-world trials and carries with it huge hopes that it will provide a key to getting out of lockdown and banishing COVID-19.

A lab at Imperial College London was yesterday pledged £22.5million by Health Secretary Matt Hancock for its efforts to make a jab to protect against COVID-19.

It plans to begin human experiments in around six weeks’ time and will follow in the footsteps of a University of Oxford project which starts testing tomorrow.

While the Oxford vaccine will try to stimulate the immune system using a common cold virus taken from chimps, the researchers at Imperial are using droplets of liquid to carry the genetic material they need to get into the bloodstream.

Both will then work, in theory, by recreating parts of the coronavirus inside the patient and forcing their immune system to learn how to fight it.

Mr Hancock said developing vaccines is an ‘uncertain science’ which usually takes years but that manufacturing capacity will be ramped up in case the jab is a success and is suitable to roll out to the public.

Oxford University’s trial will take six months and is limited to a small number of people so scientists can assess whether it is safe and effective without using huge amounts of resources – each patient must return for between four and 11 visits after the jab – and without the risk of large numbers of people being affected if something goes wrong.

Speaking at Monday’s coronavirus briefing at Downing Street, the Health Secretary said: ‘In the long run the best way to defeat coronavirus is through a vaccine.

‘After all, this is a new disease. This is uncertain science, but I am certain that we will throw everything we’ve got at developing a vaccine.

‘The UK is at the forefront of a global effort. We’ve put more money than any other country into the global search for a vaccine and, for all the efforts around the world, two of the leading vaccine developments are taking place here at home at Oxford and Imperial [College London].

‘Both of these promising projects are making rapid progress and I’ve told the scientists leading them that we’ll do everything in our power to support.’

He pledged a total of £44.5million to the projects in Oxford and London to enable scientists to go ahead with trials and getting the vaccine used in people.