Road World Championships 2019: Nils Eekhoff ‘will never ever forget these best 15 minutes of my life’

What began as a brutal 186km men’s U23 road race, played out in hearty Yorkshire wind and rain, ended in something akin to cycling’s own culture war. On one side was the UCI and the race commissaires and everyone who believe rules are inflexible things, the bones of a sport that should never be broken. 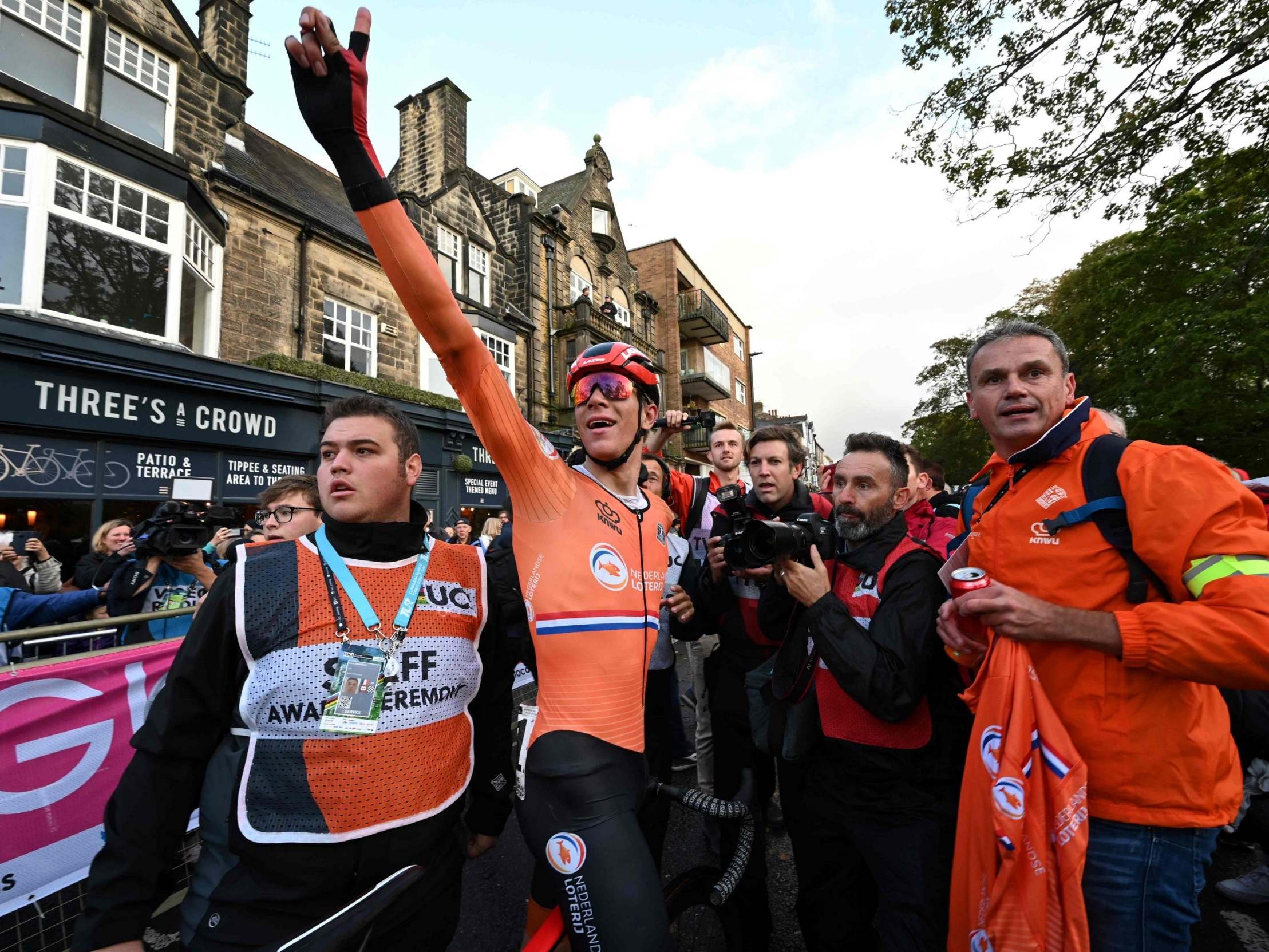 What began as a brutal 186km men’s U23 road race, played out in hearty Yorkshire wind and rain, ended in something akin to cycling’s own culture war. On one side was the UCI and the race commissaires and everyone who believe rules are inflexible things, the bones of a sport that should never be broken. On the other was everyone else, including the spidery young Dutchman Nils Eekhoff, whose world title had just been taken away.

Before that late twist there had been a brilliant bike race, one splintered by crashes and punctures, which finally came down to the final few inches of sodden Harrogate road. There Yorkshire’s Tom Pidcock put himself in the centre of a pack of seven riders who tentatively entered the final straight as one, each glancing over their shoulders and trusting no one. It was Pidcock who eventually initiated the sprint, but he didn’t quite have enough left in his legs and could only watch as the giant Eekhoff thundered home.

As he began to celebrate, word came through that the result was being investigated. After an age of lingering suspense it was announced that Eekhoff had been disqualified. Official communication later explained that he had been drafting behind his team car excessively in order to get back into the peloton following an early crash. Video replays showed Eekhoff clamber back on to his bike clutching a damaged shoulder, before tailing vehicles on the road in order propel himself up the road.

Whichever way you spin it, it’s not a great look for the governing body of a major sport to bring a young athlete to tears. Quite why he was allowed to ride on and triumph was unclear, with UCI president David Lappartient explaining: “When there’s a winner or podium rider, [the video referee] reviews a lot of sections of the race to confirm the validity of the victory, to make sure nothing happened. He reviewed it after the race and he shared it with the jury, and then they took the decision.”

Eekhoff was devastated but he didn’t want sympathy. Later he posted an admirably sanguine message on social media, both challenging his punishment and celebrating his brief moment of euphoria.

“WORLD CHAMPION! That feeling… But it only lasted for 15 minutes,” he wrote. “I’m proud [of] my performance… Although I suffered serious pain from a dislocated shoulder, the crash early in the race never stopped me from fighting for my ultimate goal. To hear they DQ me, was/is a big shock to me. I understand the rules of cycling, but truly think this decision is inappropriate. What means consistency to the UCI is a question I want to find out. But for now; I will never ever forget these best 15 minutes of my life… I’ll be back!”

It has been a typically brilliant week in Yorkshire for enthusiastic crowds and entertaining racing, despite the weather, but it has been a strangely petty show by the sport’s rule-makers. The Championships began with the farcical sight of the height of time-triallists socks measured to the centimetre, while the Colombian junior Gomez Bacarra was left marching up the road in tears following a mechanical, as rival teams cars adhered to rules preventing them from lending a helping hand.

In the case of Eekhoff, the rule itself is vaguely worded and inconsistently enforced. He was found to have been “sheltering behind or taking advantage of the slipstream of a vehicle (for some time).” Is it me or are the brackets particularly disconcerting? Lappartient said “some time” was about 30 seconds, but it seems unlikely Eekhoff would have known the details of this particular grey area.

There are always winners and losers from such dramas. The greatest beneficiary was the 20-year-old Italian rider Samuele Battistella, who was promoted to the gold medal. “I didn’t understand what had happened at first, and when I was told, I can’t describe how it felt to become the world champion and to receive the jersey,” Battistella said. “I’m sorry for Eekhoff because he was the winner of the sprint but this is cycling and we have to abide by the commissaire’s decision.”

Pidcock was upgraded to bronze, a well-deserved return for a courageous ride, although he was left to rue a rare chance missed to become world champion in front of his friends and family. “This isn’t how I wanted to win a medal and I feel really sorry for Eekhoff but rules are rules,” he said. “Maybe his group wouldn’t have caught us if he hadn’t had been drafting, so that did affect the race.

“I’m still disappointed that I didn’t win but at least I got to enjoy the crowd on the podium, and I got a medal in my home World Championships. The fans were amazing today and this was one of the greatest experiences of my life.”