The world’s nonsense keeping you awake in middle of the night? Good news. Go outside and see this two-tail comet • The Register A two-pronged comet with billowing tails of gas and dust will streak across the sky this month. If you’re in the northern hemisphere, and gazing up at the right moment – around 4am local time, July 10 to 15, looking northeast; and potentially an hour after sunset, July 14 to 23, looking northwest – you

A two-pronged comet with billowing tails of gas and dust will streak across the sky this month.

If you’re in the northern hemisphere, and gazing up at the right moment – around 4am local time, July 10 to 15, looking northeast; and potentially an hour after sunset, July 14 to 23, looking northwest – you should catch a glimpse of the comet, C/2020 F3 NEOWISE. And local time really does mean the time wherever you are. 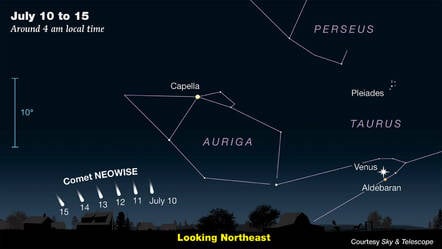 Read the directions … When to expect the comet when looking northeast. Click to enlarge. Source: Sky & Telescope. Used with permission

Solar radiation vaporizes the ice in the comet’s nucleus. Gas and dust are freed as a result, and it all forms a cloud, or coma, around the comet’s body as well its two tails. One of the tails contains ionized gas, and the other, brighter, one is made up of dust. The comet made its closest approach to the Sun on July 3. Now, it’s making its way towards Earth and will eventually cross our planet’s orbit and return to the outer edges of our Solar System by August. 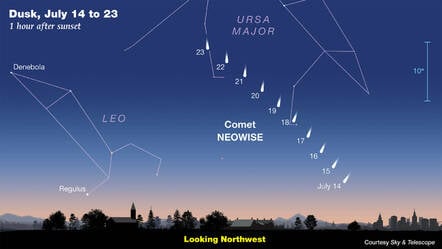 Go west … When to expect the comet when looking northwest. Click to enlarge. Source: Sky & Telescope. Used with permission

The best chance of seeing the comet is a few hours before sunrise until about July 14. Find some place with a good open view of the sky and not too much light pollution. It’s best viewed with a telescope or binoculars, though the naked eye may do just fine. After July 14, you can look for it after sunset though bear in mind it may be too faint for the naked eye.

The trick to finding the comet is to locate Venus, the brightest planet in the eastern direction. After you’ve spotted Venus, find the star Capella… or use one of those free sky-mapping apps for smartphones.

“Look far to Capella’s lower left, by somewhat more than the width of your clenched fist at arm’s length,” Diana Hannikainen, observing editor of Sky & Telescope, America’s venerable astronomy magazine, said this week. That’s roughly the spot where the comet will be.

It will appear in the sky as a fuzzy ball of light with a bright streak. “Across the same latitude, observers in both the US and the UK will see the same thing,” Hannikainen told El Reg.

“The difference in what viewers will see of Comet NEOWISE depends more on latitude than on longitude. For the UK, the comet is ‘circumpolar,’ which means it doesn’t set.

“Nevertheless, the best viewing options in the UK are similar to [the US]: for the next few days, the best sights of the comet are those early in the morning, before the Sun rises, while after 14 July or so, the comet will be better placed in the evening, while still remaining visible throughout the night until dawn.”

To find the comet in the second half of this month, look for the Big Dipper stars in the Ursa Major constellation, and search just below it, though, again, you may need some equipment to see it.

The comet will pass by Earth no closer than about 64 million miles (103 million kilometres), and is estimated to measure about three miles (five kilometres) across. ®