Donald Trump has announced new sanctions on Turkey, amid a mounting outcry over its assault upon Kurdish fighters as it invaded northern Syria, and the escape from prisons of Isis fighters. The president last week gave a green light for Ankara to launch its long-planned military operation into northeast Syria after he pulled out a small 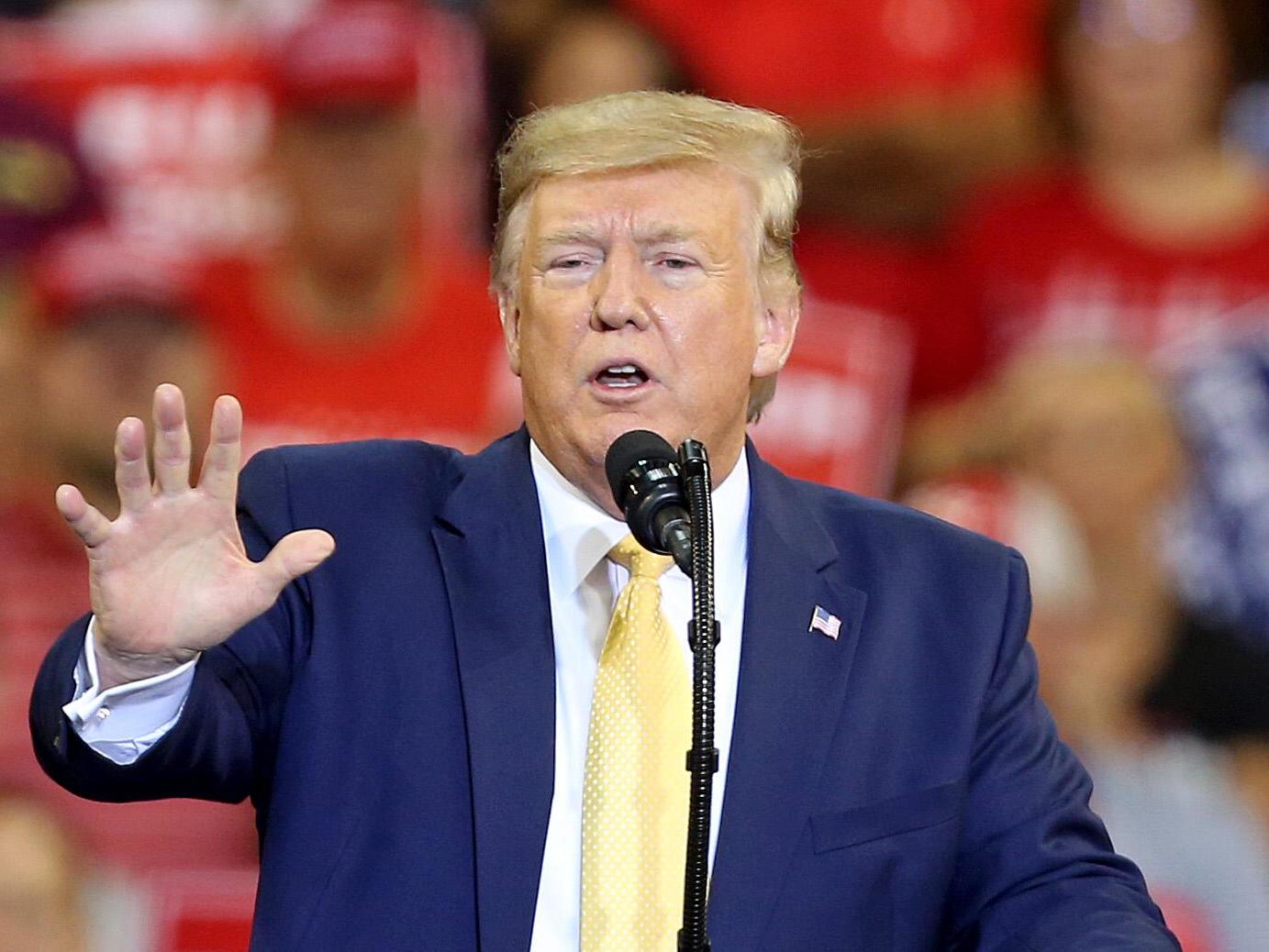 Donald Trump has announced new sanctions on Turkey, amid a mounting outcry over its assault upon Kurdish fighters as it invaded northern Syria, and the escape from prisons of Isis fighters.

The president last week gave a green light for Ankara to launch its long-planned military operation into northeast Syria after he pulled out a small number of US special forces who had been working with the Kurds, whose soldiers had spearheaded the operation to destroy Isis.

On Monday, the president signed executive orders to sanction Turkey and suspend negotiations on a $100 billion trade deal. He said he will also boost tariffs on Turkish steel to 50 per cent.

In a statement in which he vowed to swiftly destroy the Turkish economy if it continued down “this dangerous and destructive path”, Mr Trump said US troops coming out of Syria will redeploy and remain in the region to monitor the situation.

Later in the day, the White House announced the president was sending Mike Pence to the Middle East, as tensions rose.

“President Trump communicated to him very clearly that the United States of America wants Turkey to stop the invasion, implement an immediate ceasefire and to begin to negotiate with Kurdish forces in Syria to bring an end to the violence,” he said.

Mr Trump’s decision to abandon the Kurdish-led Syrian Defence Force was criticised at home and abroad as opening the door to a resurgence of Isis, and for betraying a group that had previously worked with the US against Isis.

As Turkish forces and their Syrian Arab proxies advanced, forcing the Kurds to reduce the number of fighters guarding several prisons containing Isis prisoners, a number of detainees are able to flee.

The Kurds also announce they had deceived to strike a deal with the government of Syrian president Bashar al-Assad.

Meanwhile, the president’s have been condemned for screening a meme of the president killing journalists in a church and pistol-whipping the late senator John McCain at the American Priority Conference, hosted at his own Trump National Doral Miami golf resort in Florida.

The president has reportedly called the CEO of Fox News, Suzanne Scott, to complain over the “unfair” coverage his administration has received regarding the House impeachment inquiry. He recently complained the network is “much different than it used to be in the good old days”.

On the Sunday morning talk show circuit, US defence secretary Mark Esper admitted that Turkey “appears to be” committing war crimes against America’s Kurdish allies in the Syrian Democratic Forces, as a retired Marine general says Mr Trump has “blood on his hands” over the crisis unfolding on the northern Syria border.

To see how this story played out please read below

Hello and welcome to The Independent‘s rolling coverage of the Donald Trump administration.

Donald Trump’s supporters attending the American Priority Conference have been condemned for screening a meme of the president killing journalists in a church and pistol-whipping the late senator John McCain, the event hosted at his own Trump National Doral Miami golf resort in Florida.

Here are a few choice screenshots.

Members of Trump’s inner circle – including his son Don Jr and former press secretary Sarah Huckabee Sanders – were speaking at the conference but claimed not to have seen the video, which the organisers insisted was unauthorised.

In a statement posted to Twitter, American Priority said:

Jon Sharman has this report.

The president has meanwhile reportedly called the CEO of Fox News, Suzanne Scott, to complain over the “unfair” coverage his administration has received regarding the House impeachment inquiry. He recently complained the network is “much different than it used to be in the good old days”.

On the Sunday morning talk show circuit, US defence secretary Mark Esper admitted that Turkey “appears to be” committing war crimes against America’s Kurdish allies in the Syrian Democratic Forces (SDF) in the wake of Trump’s decision to withdraw US troops from the northern Syria border. Already 60 civilians have been killed as part of the Turkish offensive launched last week against a group it considers a terrorist organisation, with fears of ethnic cleansing raised by international observers.

“It appears to be, if true, that they would be war crimes,” Esper agreed with host Margaret Brennan on CBS’s Face the Nation when she described some of Turkey’s actions against the Kurdish forces and presented footage appearing to show the summary execution of Kurdish captives.

“It’s a very terrible situation over there, a situation caused by the Turks, by President [Recep Tayyip] Erdogan. Despite our opposition, they decided to make this incursion,” Esper said.

He also confirmed that the US would be withdrawing its full compliment of 1,000 troops from the north of the country, not just the contingent of 50 initially slated.

Appearing subsequently on Fox News Sunday with Chris Wallace, Esper defended the decision by saying it was about keeping American troops out of harm’s way.

America’s actions have meanwhile left the SDF with little choice but to strike a deal with Bashar al-Assad’s government to hand over areas along the border to the Syrian army in a last ditch effort to halt the Turkish attack. The SDF said it was siding with Assad “to repel this aggression and liberate the areas entered by the Turkish army and its hired mercenaries”.
The situation on the ground has been described as “anarchy” as almost 800 people affiliated with Isis escaped from a detention camp over the weekend.

Here’s Andy Gregory and Phil Thomas on Trump’s claim yesterday he is “an island of one” by taking the stand he has on ending American involvement with Syria following the “defeat” of the Islamist extremists.

Treasury secretary Steve Mnuchin appeared on ABC’s This Week to defend the administration’s delay in sanctioning Erdogan’s Turkey for its actions, saying his department is “ready to go at a moment’s notice” while insisting: “This is a complicated, developing situation.”

Maryland Democrat Chris Van Hollen was clearly running out of patience on the matter, telling Fox News Sunday: “For God’s sake, what are they waiting for? People are being killed right now.”

Trump ally Lindsey Graham, who is co-sponsoring a bipartisan sanctions agreement with Van Hollen, has, incidentally, said he has spoken to Trump about the prospect and labelled it “a game changer”.

Over on Meet the Press, there were damning words for Trump from House Foreign Affairs Committee chairman Eliot Engel, who wondered: “Who again will trust the United States to be an ally to them?”

Esper’s predecessor, Jim Mattis, who resigned over precisely this issue last Christmas, also had a sobering warning for the administration on the threat still posed by Isis.

Perhaps the most damning remark of all came on CNN, where retired four-star Marine general John Allen said: “There is blood on Trump’s hands for abandoning our Kurdish allies.”

He said the assault was not only “completely foreseeable” but that “the US greenlighted it.”

“There was no chance Erdogan would keep his promise, and full blown ethnic cleansing is underway by Turkish supported militias,” he said. “This is what happens when Trump follows his instincts and because of his alignment with autocrats.”

“I said there would be blood, but could not have imagined this outcome,” he added.

It’s not even 7am in DC but Trump is already up and tweeting like a maniac – falsely claiming the White House released “an exact transcript” of his call with Ukraine’s president Volodymyr Zelensky for starters.

The substance of his remarks above relate to House Intelligence Committee chairman Adam Schiff‘s appearance on Face the Nation on Sunday, where he said his team’s priority was safeguarding the CIA whistleblower at the heart of the impeachment inquiry, even if that means not hearing them testify before Congress.

Over the weekend, one of the highlights from his Twitter account was this outrageous attack on Europe for the continent’s failure to take responsibility for its own Isis prisoners, the same who fled yesterday in response to the Turkish bombings he paved the way for.

A little more on that offensive Kingsman video.

The White House Correspondents’ Association has demanded an apology…

… while its origins have been traced back to Carpe Donktum, a favourite Trump meme-maker who recently visited the White House.

I’m really starting to hate it when he gets up early.

Not on the board of BHR (Shanghai) Equity Investment Fund Management Company any more, is one answer.

The son of his likely 2020 challenger Joe Biden issued a statement through his lawyers, pledging to no longer work for foreign-owned companies, rather than further encourage “the barrage of false charges against both him and his father”.

Trump also went to bat for his under-fire attorney Rudy Giuliani, who he admitted was “a little rough around the edges”.

Here’s our report on the men getting their stories straight over lunch.

Here’s our breaking story on Trump’s latest tweets, in which he implies the Kurds deliberately released those Isis affiliates, a suggestion that has been branded “sheer insanity” by one veteran diplomat.

The president branded Democratic congresswoman Rashida Tlaib “a despicable human being”, although it looked like he was referring to his own social media director Dan Scavino, to whom the phrase might more aptly be applied.

Trump tweeted a happy birthday message to the US Navy over the weekend but nothing whatsoever about his seldom-seen daughty Tiffany turning 26, leading many to assume he’d forgotten.

Joe Biden has released a new government ethics plan this morning that makes explicit reference to Trump in its bid to tackle corruption rein in conflicts of interest, declaring:

We must elect leaders with integrity, for whom the public interest is paramount. But that’s not enough. We also must strengthen our laws to ensure that no future president can ever again use the office for personal gain.

His attacks on Trump have really escalated in recent days and not before time.

Jacob Frey, the Democratic mayor of Minneapolis who opposed Trump’s rally in his city last week, wrote an op-ed for The Washington Post yesterday hitting out at the president for never paying his way.

In the last hour, Trump has used his social media bullhorn to wish America a happy Columbus Day, post a few clips of David Cameron’s former strategist Steve Hilton pushing Biden smears on Fox and to urge the electorate to vote for his ex-press secretary Sean Spicer on Dancing with the Stars.

Republicans have struggled to defend Trump since the impeachment inquiry began, with more damaging details emerging every day. Many have ducked out of opportunities to do so and this appearance by Ted Cruz on Face the Nation on Sunday shows why.
The Texas senator found himself cornered into admitting “of course” it was not OK for Trump to call on China to investigate the Bidens as he did, live on TV in front of the whole world.