Trump’s sexual assault allegations: The full list of women who have accused the President

Years after women first came forward to accuse then-presidential candidate Donald Trump of sexual assault or harassment, the issue is once again at the forefront of political discourse after another 26 incidents of “unwanted sexual contact” and 43 instances of inappropriate behaviour were detailed in a new book. The book, All the President’s Women: Donald Trump and 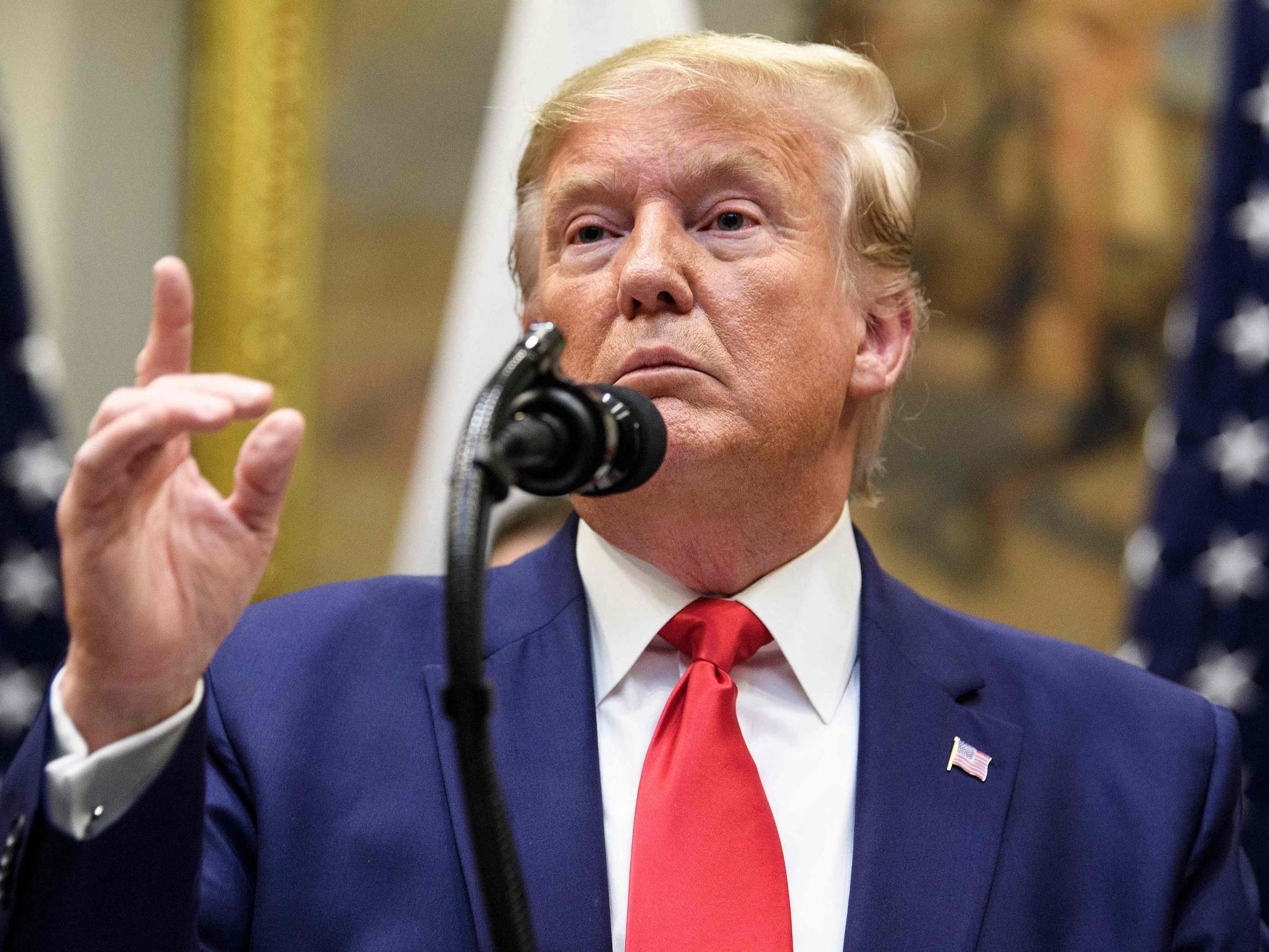 Years after women first came forward to accuse then-presidential candidate Donald Trump of sexual assault or harassment, the issue is once again at the forefront of political discourse after another 26 incidents of “unwanted sexual contact” and 43 instances of inappropriate behaviour were detailed in a new book.

The book, All the President’s Women: Donald Trump and the Making of a Predator, draws on over 100 interviews — many exclusive — and adds to a list of nearly two dozen women who had previously accused him of sexual assault or misconduct.

The allegations were noted in an excerpt of the book published in Esquire, including a new interview with Karen Johnson, who said she was touched in an unwanted manner by mr Trump at a New Year’s Eve part in the early 2000s.

The accusations comes more than two years after the MeToo movement prompted women to come forward to accuse powerful men in entertainment and media of sexual assault or harassment. As those accusations surfaced, reports indicated that the president had sought to backtrack from his apology over the infamous “Access Hollywood” tape, in which he made vulgar comments about women. He also reportedly told aides that it wasn’t him in that video. He has also previously denied assaulting anyone or kissing anyone without consent.

But, the man on the bus who laughed along with Mr Trump in that tape, Billy Bush, pushed back on Mr Trump’s denials. Bush said that it most certainly was the man who would later become president speaking in the video.

But, beyond the remarks in that video — which Mr Trump’s team has dismissed as “locker room talk” previously — accusations of sexual assault and harassment persist. The latest, from Ms Johnson, was reported just ahead of her suing the president.

Here’s a roundup of those women who have accused Mr Trump of sexual assault or harassment.

Alva Johonson, a former Trump campaign staffer, said she had to avoid a kiss from Mr Trump while on a trip to Florida in August of 2016. The White House has denied this most recent accusation, as have some members of the Trump team who say they were present.

Jessica Leeds, a former traveling salesperson, alleged that Mr Trump grabbed her breasts and tried to put his hand up her skirt while on a first-class flight in the 1980s. Ms Leeds was in her late 30s at the time.

Ivana Trump, Mr Trump’s first wife, once used the word “rape” to describe an encounter with him. The accusation was made in a 1993 book following a divorce settlement between the two. She has since softened her language, saying that she didn’t mean the word in a “literal or criminal sense”.

Jill Harth, a former business partner of Mr Trump’s, said that Mr Trump forcibly kissed her on the lips, groped her breasts, and grabbed her genitals in what she described in a 1997 as an “attempted rape”. The encounter allegedly occurred at Mr Trump’s Mar-a-Lago estate, in one of his children’s bedroom. She also says that Mr Trump groped her under the table at a dinner with colleagues at the Plaza Hotel.

Kristen Anderson alleged that Mr Trump put his hand up her skirt and touched her genitals over her underwear at the China Club in Manhattan at some point in the early 1990s when she was in her early 20s. Ms Anderson was an aspiring model at the time.

Lisa Boyne accused Mr Trump of insisting that female models walk across a table at a New York restaurant in 1996, and then remarking on their underwear and genitalia. She was 25 at the time.

Cathy Heller says that Mr Trump forcibly kissed her on the lips during a Mother’s Day brunch at mar-a-Lago in 1997.

Temple Taggart, a former Miss Utah, alleged that Mr Trump forcibly kissed her on the mouth on two different occasions. The first incident was the first time that they met.  The incidents occurred at the 1997 Miss USA pageant event, and in Trump Tower.

Mariah Billado, a former Miss Vermont Teen USA, has alleged that says that Mr Trump walked into a dressing room unannounced in 1997. She said that there were several teen beauty queens aged between 15 and 19 in the room naked at the time.

Karena Virginia alleged that Mr Trump grabbed her arm and touched her breast while she was waiting for a car after the US Open.

Bridget Sullivan, a former Miss New Hampshire, alleged that Mr Trump walked into the Miss USA pageant dressing room in 2000 while contestants were naked. She was 19 at the time.

Tasha Dixon, a former Miss Arizona, alleged that Mr Trump entered dressing rooms at the Miss USA pageant in 2001 while contestants were “half-naked”.

Melinda Macgillivray alleged that Mr Trump grabbed her buttock in a pavilion behind the main house of his Mar-a-Lago estate in 2003. They were in the middle of a group of people, she said, and it was during a concert performed by Ray Charles.

Jennifer Murphy said that Mr Trump forcibly kissed her after a job interview in 2005. She was 26 at the time.

Rachel Cooks alleged that Mr Trump kissed her forcibly on the lips outside the elevator in Trump Tower in 2005. She was 22 at the time.

Natasha Stoynoff alleged that Mr Trump pushed her against a wall and forcibly kissed her in a closed-door room in his Mar-a-Lago estate in 2005. Ms Stoynoff, a writer for PEOPLE magazine, was there to interview Mr Trump.

Ninni Laaksonen alleged that Mr Trump grabbed her buttocks while taking photos outside the Ed Sullivan Theater, and before Mr Trump appeared on the Late Show with David Letterman. Ms Laaksonen was 20 at the time, in 2006.

Jessica Drake alleged that Mr Trump forcibly kissed her and two female friends in 2006, when she was 32. When she pushed him away, she said that he asked her: “How much?”

Samantha Holvey, a former Miss North Carolina, alleged that Mr Trump treated women like “meat” and would barge into dressing rooms to inspect women. She said the incidents occurred in 2006, when she was 20.

Summer Zervos alleged that Mr Trump grabbed her by her shoulders and forcibly kissed her, and groped her breasts, while she was a contestant on The Apprentice in 2007. She said the incidents took place at Trump Tower in New York, and at a hotel in Los Angeles.

Cassandra Searles, a former Miss Washington, said that Mr Trump grabbed her buttocks repeatedly in 2013 during the Miss USA pageant in 2013. She said that he also invited her to his hotel room.

Karen Johnson, who said Mr Trump pulled her into a tapestry by her crotch at a New Year’s Eve party in the early 2000s.

The White House and Mr Trump have denied the allegations. During a 2017 press briefing, White House Press Secretary Sarah Huckabee Sanders said that the West Wing’s official position is that the women accusing Mr Trump of sexual assault or harassment are lying. Mr Trump has also suggested that the women who have come forward accusing him were not attractive enough for him to sexually assault them.

Several allegations have been made in All the President’s Women, and are not immediately availble to be listed here