Just because the majority of this match did not have the looming threat of yet another miraculous European comeback, did not mean it was without its moments of real, edge-of-your-seat drama. In a week that saw two equally bonkers miracles at both Anfield and Amsterdam, Arsenal managed to avoid a similarly raucous fate, becoming the 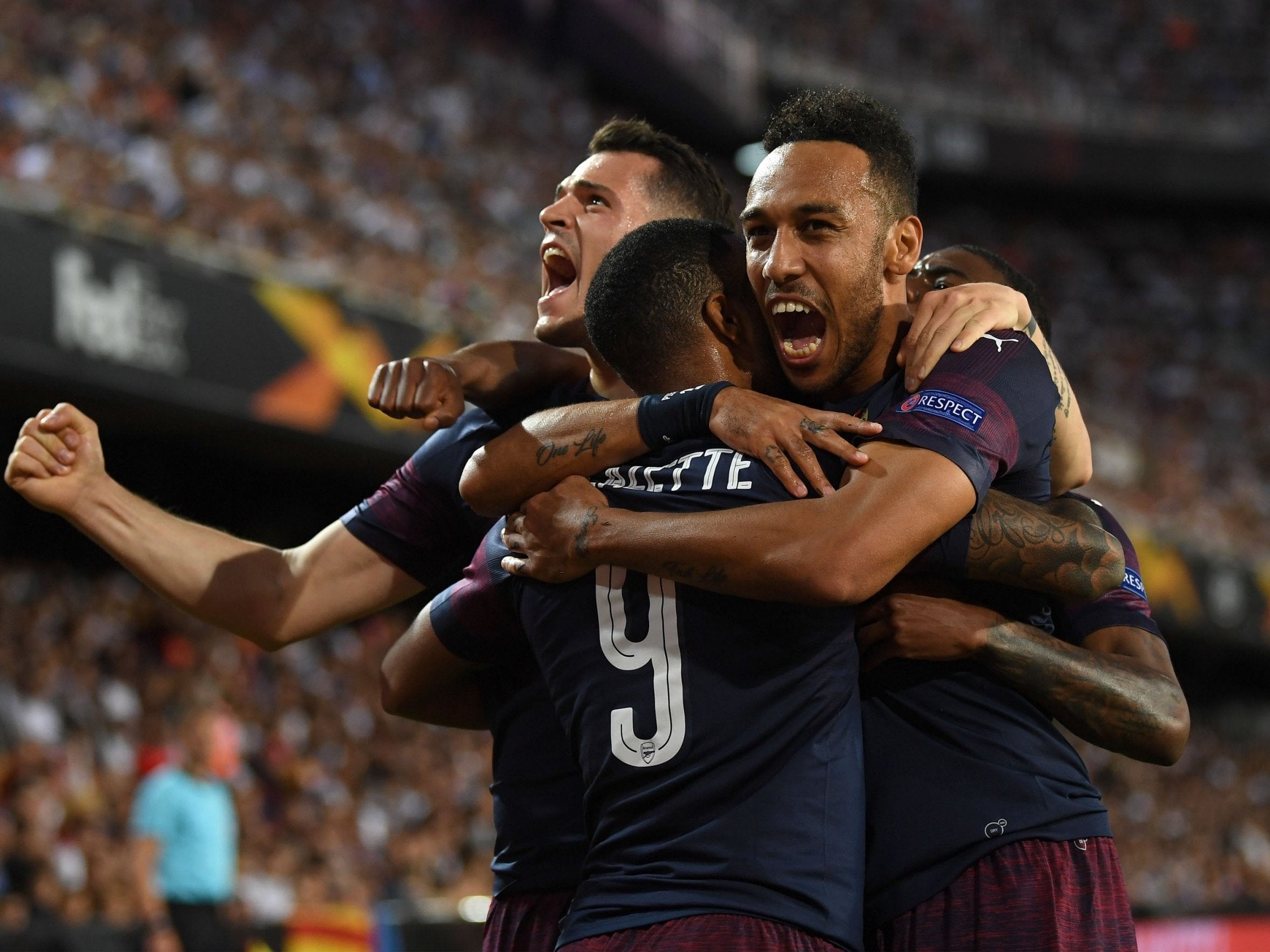 Just because the majority of this match did not have the looming threat of yet another miraculous European comeback, did not mean it was without its moments of real, edge-of-your-seat drama.

In a week that saw two equally bonkers miracles at both Anfield and Amsterdam, Arsenal managed to avoid a similarly raucous fate, becoming the first side to successfully defend a first leg lead in European competition this week. Their reward? A Europa League final 3000m from home, potentially against a side from six miles down the road. Well played, Uefa.

Yet there was only one brief, thrilling period of this match, immediately after Kevin Gameiro had opened the scoring, when Valencia had truly believed and Arsenal’s season had threatened to unravel. That mythical comeback only looked momentarily likely. A little later and Arsenal were level. A little later still and a Pierre-Emerick Aubameyang hat-trick had secured them safe passage to their first European final since that miserable night in Paris 13 years ago.

Upon the final whistle, Unai Emery did not even have the chance to repeat the act for which he is reviled for in these parts. Five season ago he made an enemy of the club which once adored him when he celebrated Sevilla’s late European win here with gleeful abandon. But this time around he was quick to disappear down the tunnel after the game ended in confusion, both benches completely emptied by a shoving match between Ainsley Maitland-Niles and Gabriel Paulista.

It was a suitably barmy conclusion to a suitably barmy game. And the gusto with which Arsenal’s players celebrated this win with their fans — just as soon as Gabriel had been dragged to the dressing rooms and the temperature cooled — told you everything you need to know about how seriously the club has treated this tournament.

While the Europa League may not be the continental competition a club with Arsenal’s ambitions dream of playing in, this month’s Baku final is a tangible sign of the progress they have made. And despite their difficulties this season, they are now just one match away from a return to the promised land.

That progress is largely down to the continued good form of just two men. As usual, Arsenal had much to owe to Aubameyang and Alexandre Lacazette, two veritable rock gods playing frontmen to this band of hardy session musicians for the hell of it.

In Arsenal’s press room after the first-leg at the Emirates, an ashen-faced Marcelino had wondered aloud how much the English side had paid for the duo. The answer: considerably less than they would rake in if they ever decided to move them on. Aubameyang got three and Lacazette the all-important second, and by the time the former had rounded off his hat-trick with a thumping finish, Valencia’s supporters were already streaming away into the night.

But it was Aubameyang’s second goal, a neat finish from Maitland-Niles’s wicked cross, that had completely killed their spirit. Silence suddenly enveloped this famous old stadium like a blanket muffling a speaker. The singing stopped. The drumming stopped. And you suspected that, were you to tear your eyes from the pitch and to gaze upwards, the bats would have stopped flying, too. All apart from the northeast section of the ground, where Arsenal’s supporters buzzed happily. And all apart from the corner of the pitch directly beneath them, where their players congregated once again.

It was Gameiro’s opening goal in the very same corner of the very same goal that had seen Valencia dare to dream.Still reeling from this week’s Champions League carnage, Emery had been determined for his side to get on the front foot, only for his side to be sliced open the very first time they pressed forward. With Maitland-Niles characteristically over-committed, Goncalo Guedes sprung forward, spotting the intelligent run of Rodrigo. The former Bolton loanee crossed when he could have shot, with Gameiro on hand to turn the ball beyond Petr Cech.

Bedlam. And how different this match might have been if, just moments later, Gameiro had remembered he is a Valencia forward rather than an Arsenal centre-back. Again Rodrigo was at the centre of things, pouncing upon a loose ball in the box, only to see his well-struck daisy cutter ping off the toes of his team-mate and deflect clear. It was a more significant defensive contribution than Shkodran Mustafi has made all season.

Gameiro’s moment of charity was thrown into even sharper relief a few minutes later when Cech, perhaps spooked at the thought this was the graveyard where his professional career was to end, launched a long ball forward for Lacazette to nod on to Aubameyang. He pounced: rifling a low shot beyond Neto’s despairing dive to open his account

Valencia’s situation was suddenly similar to the one both Liverpool and Spurs found themselves in: three second-half goals or bust. They simply did not have it in them. And any lingering hope of producing a third famous comeback fizzled out into the night air when Lacazette, having been set up by Aubameyang’s counter-attack down the right, held off Cristiano Piccini to crack a low shot into the net.

That meant Valencia needed four more; they were to score only one before Aubameyang’s decisive third. Again Rodrigo was the creator. Again Gameiro was the man to clatter the ball home from close-range. But the hope did not last long. Aubameyang slammed home a fine finish from an acute angle to complete his hat-trick, the two teams collided in angst and by the time the officials had restored order, Arsenal were looking forward to their first final under Emery.