Youth, 18, fighting for his life after ‘two men armed with knives stab him multiple times’

Four teenagers have been wounded in separate knife incidents and one 18-year-old is fighting for his life – in another night of carnage across the capital. An 18-year-old was stabbed multiple times in Kidbrooke, near Blackheath, this afternoon – with eyewitnesses claiming it happened in front of children. In another incident in Tottenham, a boy,

Four teenagers have been wounded in separate knife incidents and one 18-year-old is fighting for his life – in another night of carnage across the capital.

An 18-year-old was stabbed multiple times in Kidbrooke, near Blackheath, this afternoon – with eyewitnesses claiming it happened in front of children.

In another incident in Tottenham, a boy, believed to be aged 17, received a slash wound to his face at about 6.05pm on High Road, Tottenham.

While police have also confirmed a 17-year-old has been stabbed in Barking at around 7pm and an 18-year-old man has been attacked in Tooting at around 9pm.

It comes on the same day as the country’s top police chief, Cressida Dick, has said youth knife violence is at the worst level she has ever seen it. 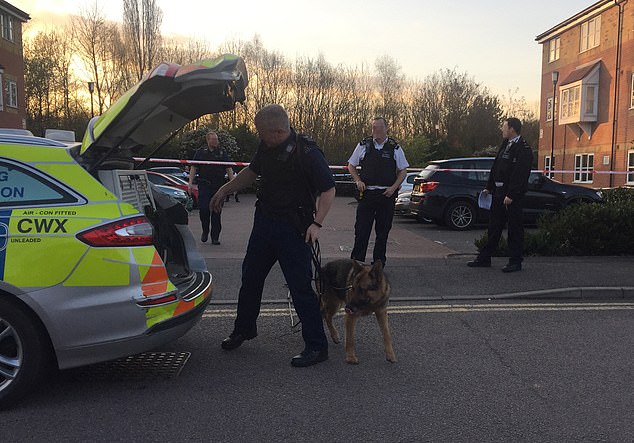 Police were called to Thyme Close (pictured) in Kidbrooke, near Blackheath, south east London at 3.24pm following reports that a male was being threatened with a knife 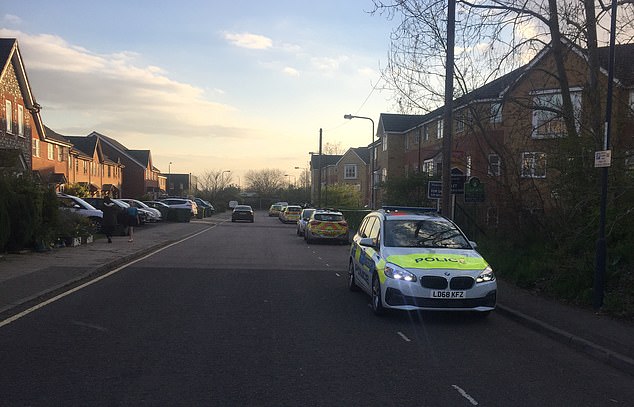 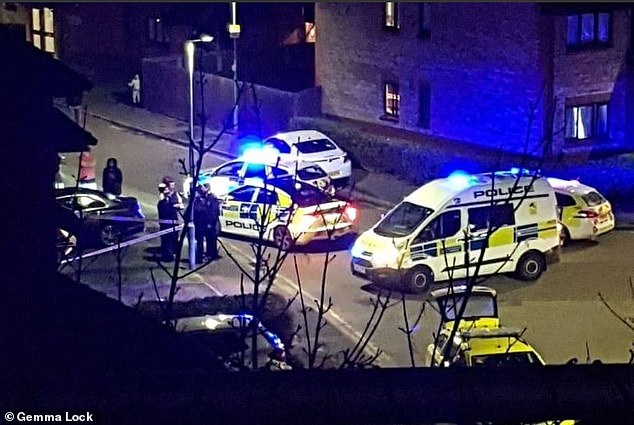 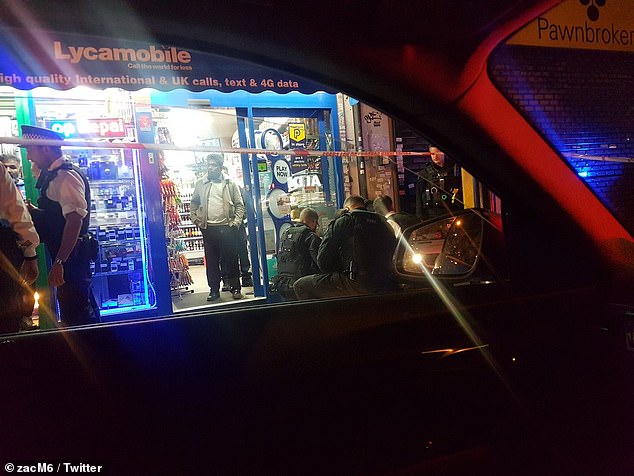 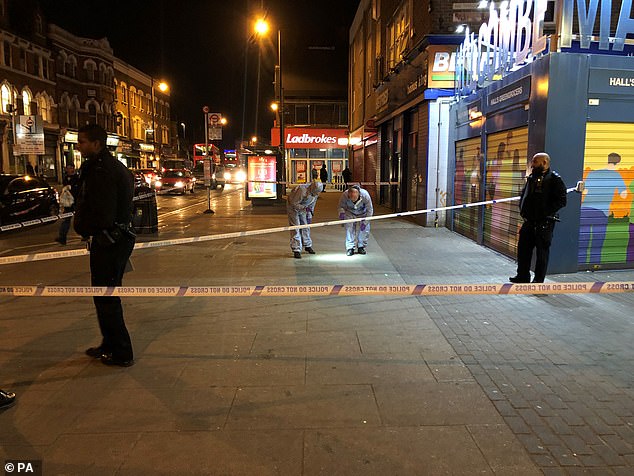 The Metropolitan Police said a boy, believed to be aged 17, received a slash wound to his face at about 6.05pm on High Road, Tottenham

Police were called to a road in Kidbrooke, near Blackheath, south east London at 3.24pm following reports that a male was being threatened with a knife.

Paramedics and officers attended the scene in Thyme Close and found a man, aged around 18, suffering from multiple stab wounds.

Stunned residents have told how they saw blood ‘gushing’ from a wound to his side after he was chased by a car.

Two men are reported to have jumped out armed with knives and attacked the man, thought to be aged just 18.

Children on their way home from school are understood to have seen the sickening attack. One witness, who said she was too scared to be named, described how the drama unfolded.

She said: ‘I was coming home from work when I saw a black car come speeding past me. It was going really fast. The car smashed into two others and made a loud noise. 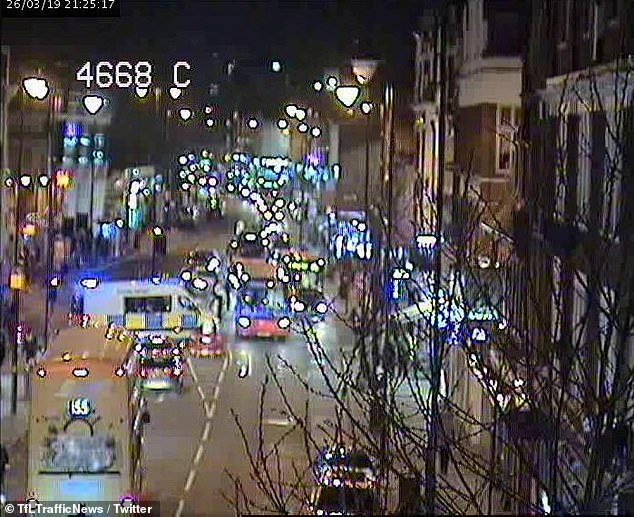 ‘Two men got out of the car armed with huge knives.

‘They were very large and fearsome. The blades were massive. I was absolutely terrified and just called the police straight away. I was so scared.’

Describing the moments after the attack, she said: ‘The car then reversed and fled. I went to see what had happened and saw this man standing up. He had an injury to his head.

‘He then just collapsed to the floor. He was totally covered in blood. It was everywhere. It was obvious he had been stabbed in his side.

‘It only happened a few seconds before. I tried talking to him just to get his name and get him talking.’ 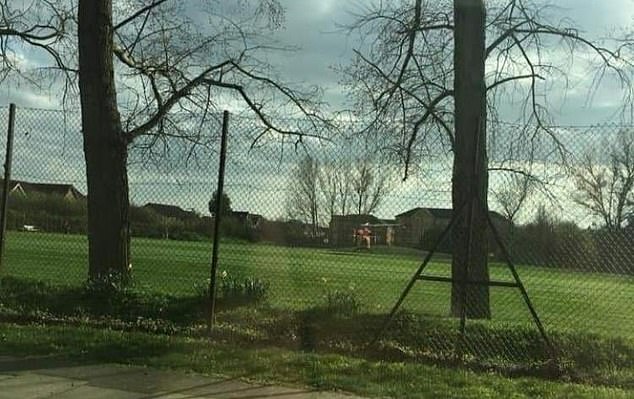 The victim has been taken hospital in a life threatening condition. An air ambulance landed in a play park (pictured) close to the scene of the stabbing in Kidbrooke, near Blackheath, south east London

Six police cars were parked up outside a block of flats which was cordoned off by officers on the new build estate off Nelson Mandela Road which is the site of an old RAF depot.

More than a dozen uniformed officers could be seen as forensics officers carried out a detailed search of the area where the teen was stabbed.

The witness continued: ‘He was in a very bad way. He kept coming in and out of consciousness. He was black and looked like he was in his early 20s.

‘People got blankets and we tried to stem the flow of blood. Another man helped me as well and we just tried to stop it. It was everywhere.

‘It all happened so quickly. There were school children very close as well. They witnessed it all and saw the man. They were very upset. It was a terrible situation.

‘They were only aged about 12. It was so traumatic but we had to act to help the poor man who had been stabbed.’

The witness said ‘blood was gushing’ from his side.

She added: ‘It was horrific. To begin with I’m not sure he realised he had been stabbed.

‘It must have been a planned attack because the people in the cars were travelling as if they knew exactly who they were after.

‘It’s left me terrified. This is a nice area.

‘We’ve heard about all the stabbings and now this has happened on our doorstep. I just hope the poor man is OK.’ 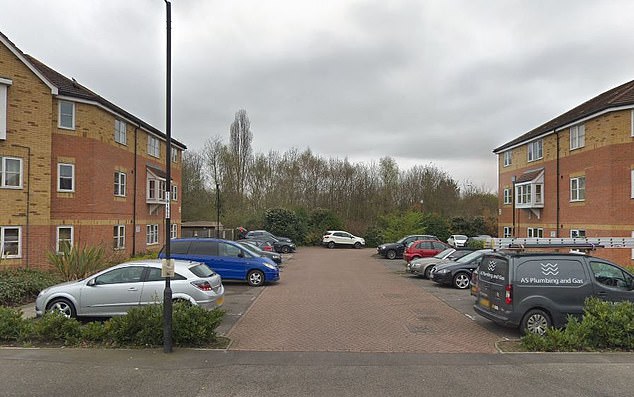 Police were called to Thyme Close (pictured), Kidbrooke at around 3.24pm following reports of a male being threatened with a knife

While another witness, who also asked not to be named, said: ‘I saw two guys stab him. They had got out of a black Hyundai car.

‘He looked like he had been stabbed in the abdomen and was bleeding heavily from the head so he could’ve been stabbed there too but I can’t be certain of that.’

He said a woman ran out of a nearby house to help the victim as he lay on the ground.

And added: ‘A lady was helping him. His coat, T-shirt and face was covered in blood and he was just lying there.

‘It was horrible seeing so much blood. I was shocked when it happened.

‘The lady helping him did most the work, getting things to soak up the blood. I hope he is all right.’

Neighbour Kay Hornsay, 50, a cleaner, said: ‘I came home and saw the officers here. I was worried sick when I saw the cordon.

‘There’s too much of it going on in London at the moment, it’s heart breaking.

‘I just hope they find the people who did it quickly.’

While train driver Amber Heard, 31, was woken after a night shift by shouting shortly before police arrived.

She said: ‘I heard a guy shouting not long before police turned up. I couldn’t make out what he was saying but it was like ‘oi’.

‘I didn’t really think anything of it but then police arrived.

‘It’s really sad that someone so young has been stabbed here – there’s been a lot of crimes in this area. It makes me want to leave.’

A cordon is in place however there is limited disruption to access to the road.

Residents will see officers in the surrounding area for a number of hours while initial investigative work takes place.

The victim has been taken hospital in a life threatening condition, after an air ambulance landed in a nearby play park.

Later today, a teenager was slashed in the face in north London just metres from a police station. 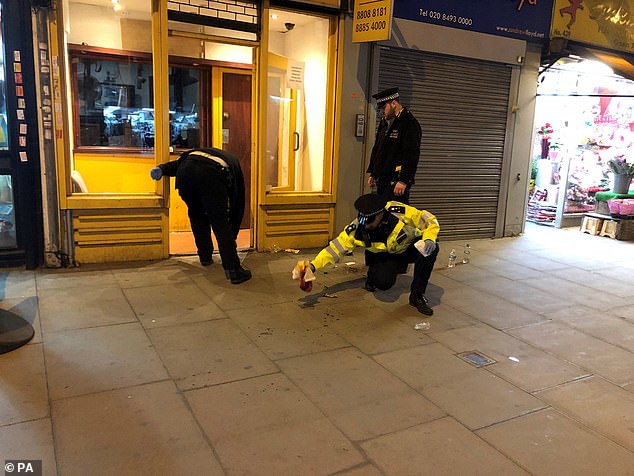 Blood splatters were being cleaned from the pavement outside a taxi office opposite Tottenham Police Station, around 160 metres down the road, on Tuesday evening

The Metropolitan Police said a boy, believed to be aged 17, received a slash wound to his face at about 6.05pm on High Road, Tottenham.

The alleged attack is said by police to have taken place by a Betfred shop.

Blood splatters were being cleaned from the pavement outside a taxi office opposite Tottenham Police Station, around 160 metres down the road, on Tuesday evening.

Cordons have been set up at both locations.

An officer at the scene said a man had received facial injuries after ‘an altercation between two young groups,’ and that the two cordons were linked.

The boy was treated at the scene by the London Ambulance Service staff, who assessed the injury to be non-life threatening, and taken to an east London hospital.

No arrests have been made.