Zuck says Facebook made an ‘operational mistake’ in not taking down US militia page mid-protests. TBH the whole social network is a mistake The antisocial network’s chief exec has shared a video proclaiming just how upset he is that Facebook’s content checkers failed to remove a violent militia group calling itself the Kenosha Guard. Zuckerberg said the American militia’s call-to-arms posted on the site had slipped past Facebook’s first level of checks, and that the group’s page has now been taken down albeit after two people lost their lives. 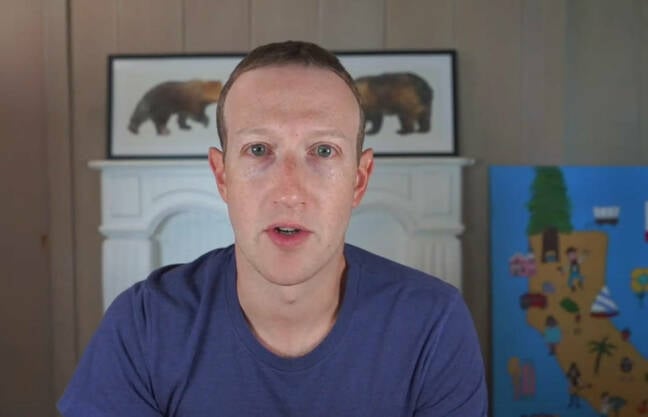 The Wisconsin city of Kenosha has been rocked by protests after Jacob Blake, 29, was shot in the back seven times on Sunday in front of his children by police attempting to arrest him as he got into his car, making no attempt to deescalate the situation. Blake is now paralyzed from the waist down. Protests and riots followed in Kenosha and elsewhere in the US. Amid this unrest, the following call to arms was posted on Facebook by the so-called Kenosha Guard on Tuesday:

“Any patriots willing to take up arms and defend our city tonight from the evil thugs? No doubt they are currently planning on the next part of the city to burn tonight.”

That night a teen gunman crossed state borders armed with a rifle, a med pack, and latex gloves to reach Kenosha, shooting two people dead and injuring another. A 17-year-old was later arrested and charged with multiple first-degree murders.

The whole affair, and its handling by the cops, has drawn the attention of groups as wide-ranging as the NBA and Major League Baseball, who have called off games in protest. While the alleged shooter wasn’t affiliated with the Kenosha Guard, Zuck addressed the situation in a scheduled meeting with staff and released the video publicly on Friday.

True to form, Zuckerberg said that he was really, truly, very sorry that he had, once again, let his social network become a platform for hate.

“I think that’s painful, that’s really discouraging,” said Zuck, “and it is just another reminder that there is a lot more to do.”

Zuckerberg admitted that the group’s page “violated this policy that we put in place a couple weeks ago … we were worried [people] could be trying to organize violence.” He went on to say that the failed takedown was “largely an operational mistake.”

“It’s because the team that enforces our policy against dangerous organizations is a specialized team,” Zuck tried to explain. “The contractors and reviewers who the initial complaints were funneled to didn’t pick this up.”