Asian people are up to five times more likely to catch the coronavirus than white people, according to data from a government-run surveillance scheme. An Office for National Statistics (ONS) report released today revealed seven out of 1,510 Brits identifying as Asian swabbed positive for Covid-19 — a rate of around 0.46 per cent. For

Asian people are up to five times more likely to catch the coronavirus than white people, according to data from a government-run surveillance scheme.

An Office for National Statistics (ONS) report released today revealed seven out of 1,510 Brits identifying as Asian swabbed positive for Covid-19 — a rate of around 0.46 per cent.

For comparison, the rate was 0.12 per cent for white people. The ONS concluded the risk was slightly higher than the percentage difference and that Asians were 4.8 times more likely to test positive.

No cases were diagnosed in any other ethnic groups in England between June 8 and August 2, which is when the data relates to. But the body claimed black Britons were twice as likely to be diagnosed, based on older figures.

Numerous reports have found black, Asian and minority ethnic (BAME) people in Britain face a higher risk of dying if they catch coronavirus than white people.

Experts remain baffled as to why but have suggested it could be down to the fact ethnic minorities are more likely to be poor, use public transport more often and work in public-facing jobs – all three of which make them more prone to interacting with strangers and catching the disease.

Results of antibody tests — which tell if someone has had the disease in the past — showed a similar discrepancy between ethnicity, with just 4.8 per cent of white people testing positive for the substances. In comparison, the rate was around 10.8 per cent for Asians and 9.5 per cent for Black Britons.

The ONS data released today — which takes into account swab test results of around 50,000 people — also revealed single people were more likely to test positive and that almost three-quarters of people struck down with the disease reported having no symptoms on the day they were swabbed. 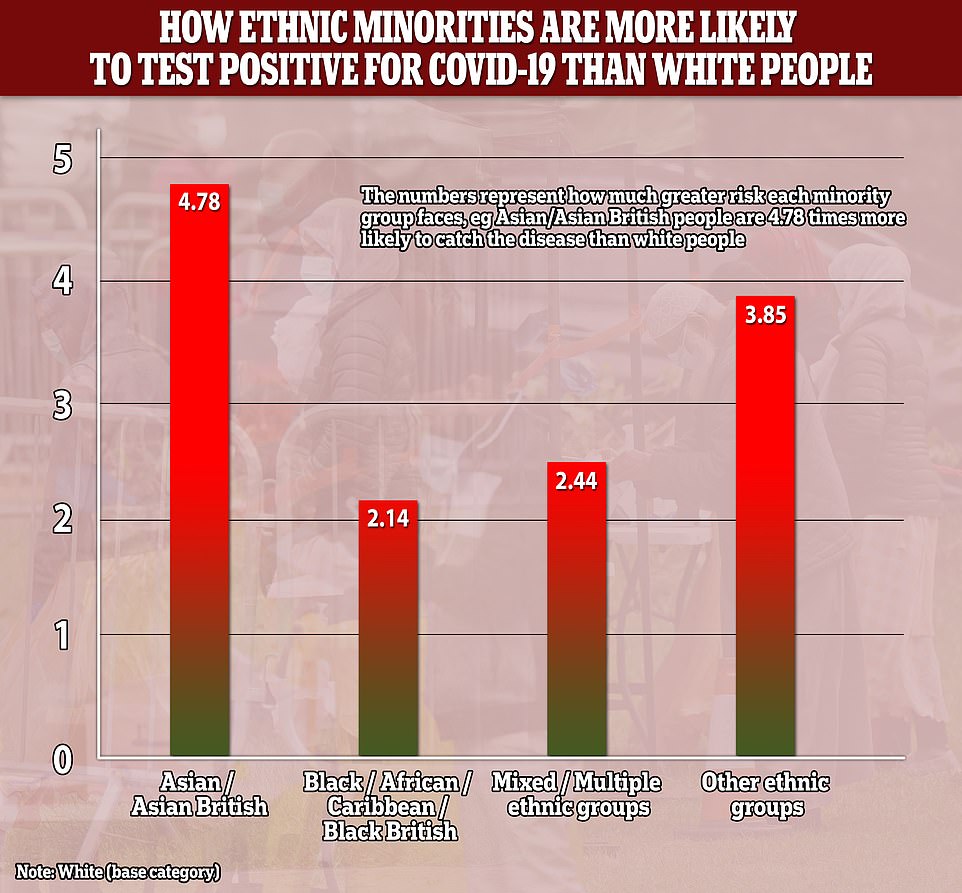 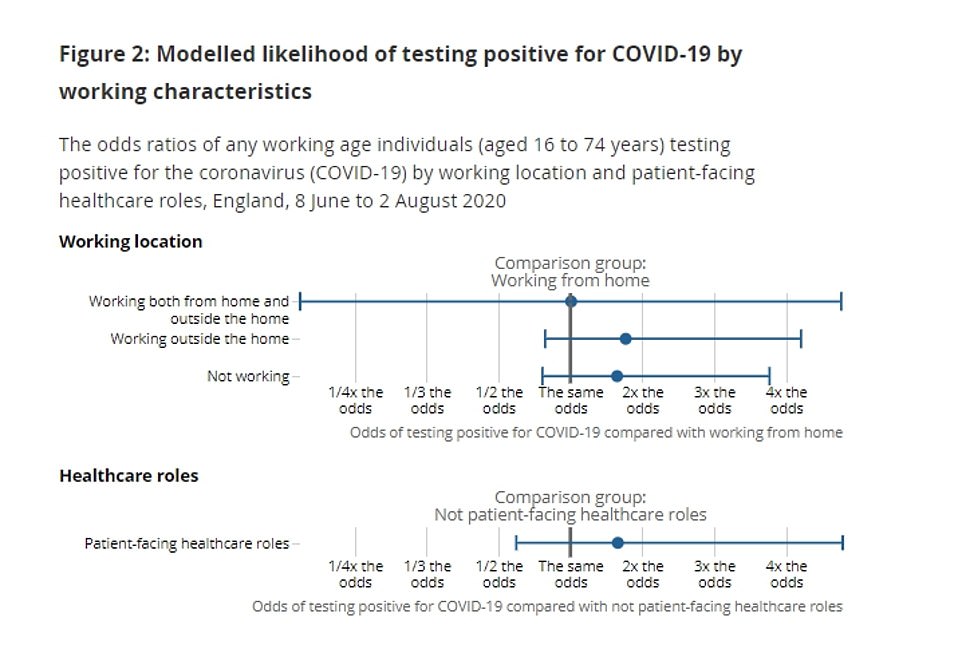 People who didn’t work or who couldn’t work from home were almost more likely to test positive, as well as healthcare workers in patient-facing roles

The ONS found that only around 28 per cent of people testing positive for Covid-19 reported any evidence of symptoms at the time of their swab test or at either the preceding or subsequent tests.

The remaining 72 per cent of positive cases either did not report having any of the specific or general symptoms on the day of their positive swab test, preceding or subsequent swab tests or did not answer both questions, the ONS added.

WHY ARE SO MANY CORONAVIRUS VICTIMS FROM BAME BACKGROUNDS?

Experts say there is unlikely to be one sole reason as to why ethnic minorities are more likely to become severely ill or die from the virus.

People from ethnic minority backgrounds make up a large amount of the NHS workforce.

This exposes them to bigger loads of the virus more often because they come into face-to-face contact with gravely ill patients.

Having a high viral load – the number of particles of the virus someone is first infected with – gives the bug a ‘jump start’, scientists say.

Members of ethnic minority communities are twice as likely to be affected by poverty, and are often hit the hardest by chronic diseases.

Those living in poverty smoke and drink alcohol more and are more likely to be obese – all of which increase the likelihood of chronic health conditions.

Patients with pre-existing health troubles struggle to fight off COVID-19 before it causes deadly complications such as pneumonia.

People from poorer backgrounds are also more likely to use public transport more often and live in crowded houses – driving up their chance of catching and spreading the virus.

They could also be more at risk because of their professions, according to Shaomeng Jia, an economics professor at Alabama State University’s College of Business Administration.

Those working in retail, in supermarkets and in construction – who cannot work from home – were still mingling and risking infection even when the outbreak peaked, she said.

It said that the findings, published on Tuesday, suggested that there was a ‘potentially large number’ of asymptomatic cases of the virus.

The ONS added: ‘Of those who had tested positive, only 28 per cent reported any evidence of symptoms at the time of their swab test or at either the preceding or subsequent swab test.

‘The remaining 72 per cent of positive cases either did not report having any of the specific or general symptoms on the day of their positive swab test, preceding swab test or subsequent swab test or did not answer both questions.

‘This suggests there is a potentially large number of asymptomatic cases, but it is important to note that symptoms were self-reported rather than professionally diagnosed.’

But the ONS stressed that its analysis was based on 165 people in its sample who had tested positive and any false positives, people without the disease who test positive, could have an effect on the results.

The new analysis, based on data from the ONS Coronavirus Infection Survey, also found that people in one-person households were estimated to be around twice as likely to test positive for Covid-19 on a swab test than those in two-person households.

The ONS said that there was no evidence to suggest that those living in larger households, containing three, four or more people, were at higher or lower risk of testing positive than those living in two-person households.

It said it will investigate why one-person households might be more likely to test positive and suggested it could be because these people were more likely to go and meet friends and family from other homes.

The ONS added: ‘There is some evidence to suggest that household size affects the percentage of individuals testing positive for Covid-19 on a swab test taken between June 8 and August 2 2020.

‘Recently, we have introduced new questions in the study about contacts, so we will investigate why those in one-person households might be more likely to test positive in a future article.’

The report also could not find any increased risk between those who had returned to work versus people who continue to work from home.

There was also no difference between those who were not working at all – such as students, retirees or employees who had been furloughed – and people currently in employment.

But people who worked in patient-facing roles in the NHS or care home staff were significantly more likely to catch the virus than people in other work.

Among nurses, doctors and social care workers, 12.6 per cent tested positive for Covid-19 antibodies from a blood test during the study period.

By comparison, the percentage of people reporting not working in these types of roles was almost three times lower, at 4.7 per cent.

Investigations have been launched into the deaths of hundreds of NHS and care workers who had Covid-19 to see if they were properly protected.

Ministers have asked medical examiners to review the deaths of all frontline health and social care staff who died while fighting the first wave of the epidemic in England and Wales.

The review, which was launched last month, will look to determine if the victims caught the infection as a result of their work and if they had access to personal protective equipment (PPE).

Many hospitals and care homes ran out of PPE at the height of the crisis and there were harrowing reports of staff having to make their own masks and use bin bags as aprons.

The Office for National Statistics estimates a total of 625 health and social care workers’ deaths across England and Wales were linked to coronavirus up to July 20 – one of the highest rates in the world.

The medical examiners, which were introduced in the NHS last year and are called in to independently review deaths, will state whether they ‘have reason to suspect the Covid-19 infection was acquired in employment,’ The Independent reported.

Employers including the NHS could face legal consequences if it emerges that deaths were caused by their negligence. 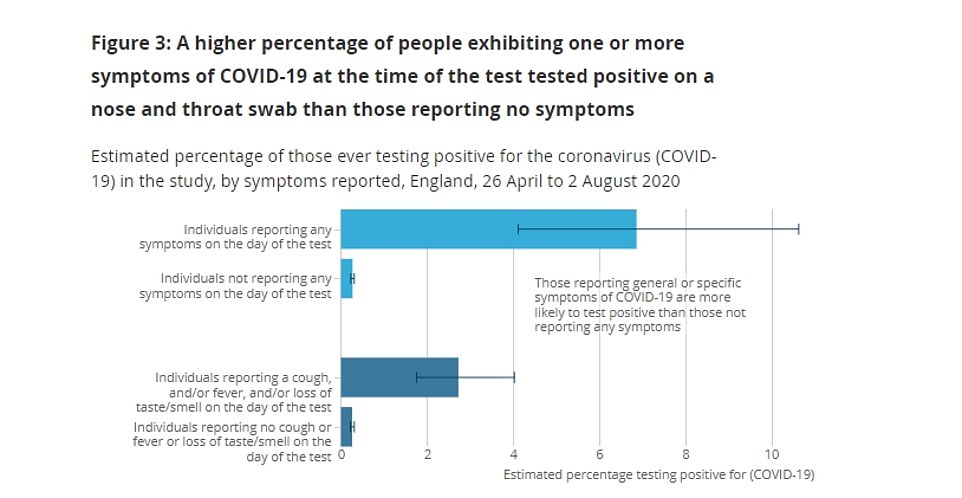 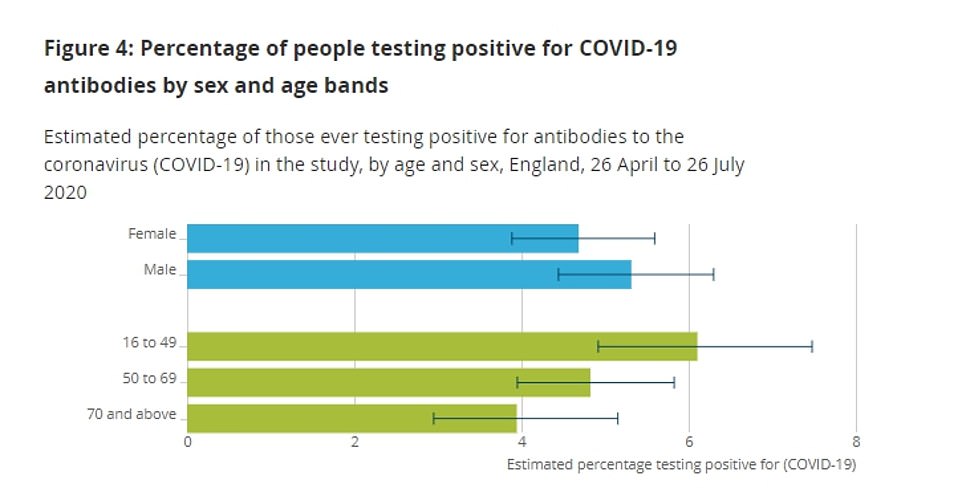 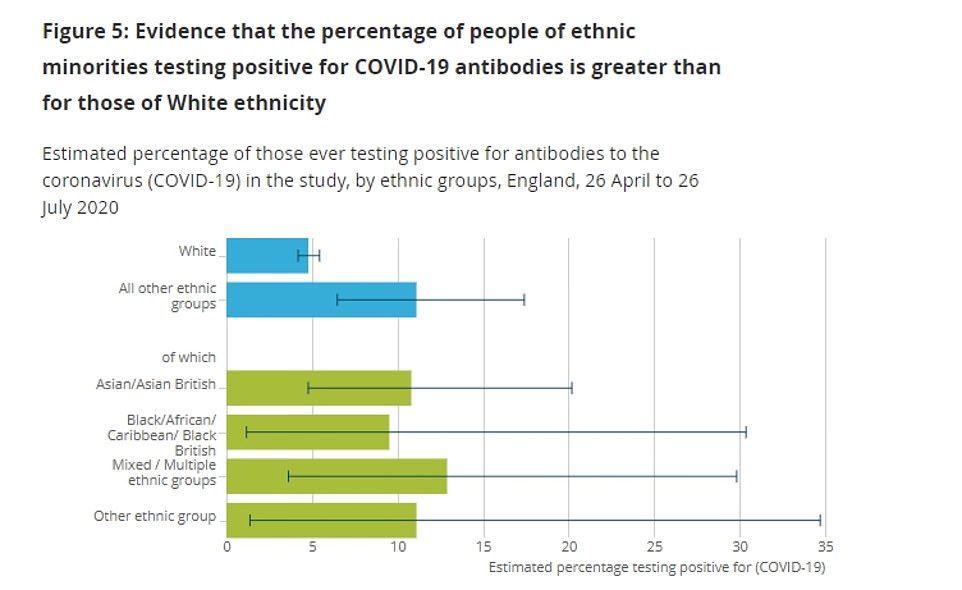 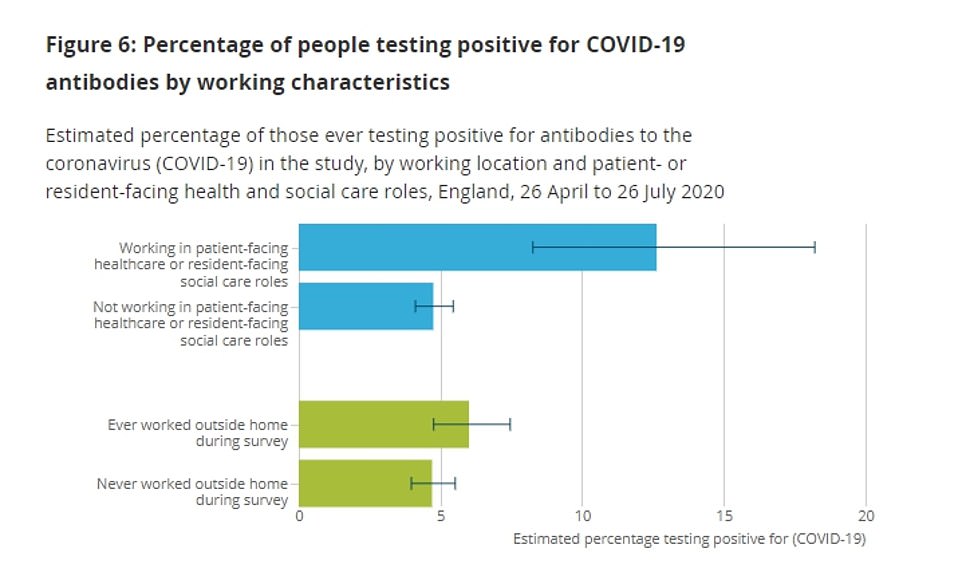