BRIAN VINER on the big screen version of Downton Abbey

Swapping period costumes for modern fashions, the stars of Downton Abbey reunited last night for the premiere of the film version of the ITV drama.

Miss Dockery wore a glamorous shimmering full-length gown, while Miss McGovern was in fuchsia and Miss Carmichael looked stunning in an asymetric black dress with hand-shaped brooch on one shoulder.

Miss Middleton was in a black ruffled gown. Bonneville wore a tuxedo – and a rather scruffy beard.

You might be one of them. You will almost certainly know some of them – those millions of Brits who woke on Boxing Day 2015 feeling bereft that Downton Abbey, one of this century’s great TV behemoths, was over, finished, conclusively done and, as if seen to by a diligent parlour maid, dusted. 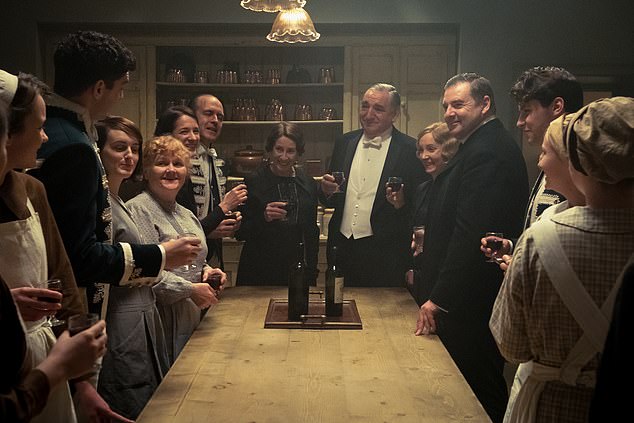 Irresistible: The film has all the ingredients of the TV original.  This film is nothing more than an entire series in miniature, full of compacted plots and sub-plots, some compelling, some preposterous, some purring with early promise then fizzling out, just like on the telly

But here they all are again in the eagerly-awaited film version, giving us an unprecedented opportunity to watch the Earl of Grantham’s second chin wobbling in empathy, Mr Carson’s eyebrows beetling in consternation, the Dowager Countess of Grantham’s lips pursed in disapproval, all in gigantic silver-screen form.

There is a marvellous moment when Jim Carter as Mr Carson, Downton’s steadfast former butler, is summoned out of retirement to help prepare for the visit of the King and Queen.

Bowler-hatted, granite of both countenance and purpose, he strides down the drive towards the great house.

An unseen orchestra swells, as when anything momentous happens in the movies. Sylvester Stallone as Rocky rising from the canvas, John Wayne squaring up to the Comanche, Carson returning to deal with the kedgeree. That sort of thing. 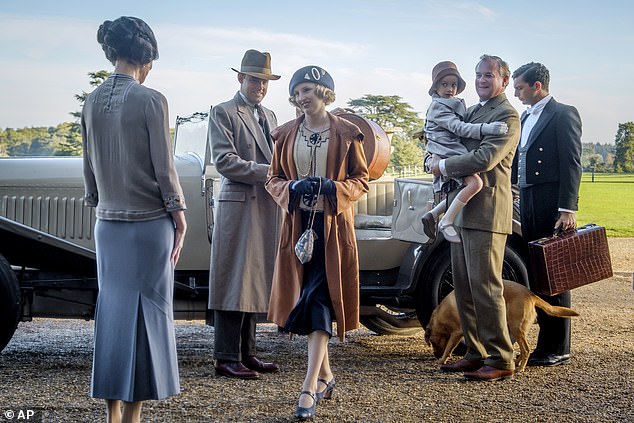 Lady Mary (Michelle Dockery) is beginning to wonder whether the heyday of great landed families might be over. Indeed, she is so remarkably modern that she uses the term ‘conspiracy theory’ fully 40 years before it was coined

Actually, that’s where the challenge lay for Downton’s creator Julian Fellowes, who wrote the screenplay. Could he and US director Michael Engler, a TV veteran without much feature-film experience, really make their story properly cinematic?

The answer is yes, up to a point. The lavish production values and meticulous period detail transfer splendidly to the big screen.

But in essence, this film is nothing more than an entire series in miniature, full of compacted plots and sub-plots, some compelling, some preposterous, some purring with early promise then fizzling out, just like on the telly.

Knitting them all together is the overnight stay of King George V (Simon Jones) and Queen Mary (Geraldine James). It is 1927.

Someone wonders whether old Lady Grantham (Maggie Smith) was affected by the social upheaval caused by the previous year’s General Strike? 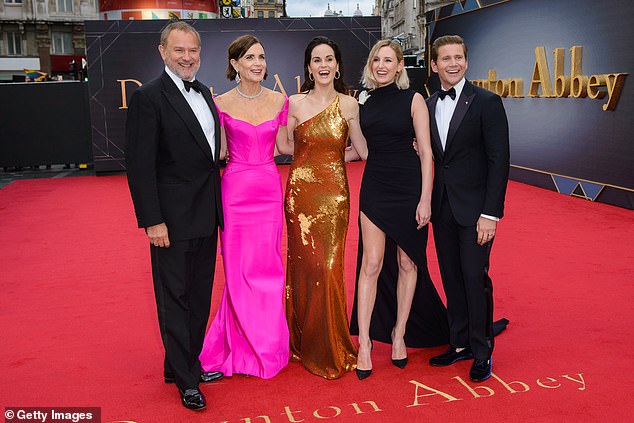 ‘My maid was rather curt with me,’ she declares, a nice reminder that Fellowes is capable of writing very funny dialogue.

As ever, much of it comes from Dame Maggie’s mouth, spat out past the plums. All Downton fans know she is at her most comical when she is in high dudgeon, and in this film her dudgeon could hardly be higher.

The Queen’s lady-in-waiting, Lady Maud Bagshaw (Imelda Staunton), is her cousin, but they have fallen out over the question of who will inherit her fortune.

The Countess believes it should be her son, the 7th Earl (Hugh Bonneville). Lady Bagshaw has other ideas.

Meanwhile, there is similar indignation below stairs, what perhaps we might call low dudgeon, because the King’s pompous butler (David Haig) has informed the servants that the royal household will be taking over their jobs for the duration of the royal visit.

‘All this fuss for a man and woman we don’t even know,’ she chirps, turning out to be an improbable republican.

Tuppence Middleton was among cast members on the red carpet in Leicester Square. The lavish production values and meticulous period detail transfer splendidly to the big screen

Republicanism rears its brazen head elsewhere in the story, but how and where I must let you find out for yourself.

What you can probably guess, however, is that the Downton staff contrive to get the better of the royal retinue, though in ways that belong more to a Chuckle Brothers sketch than a grown-up feature.

Meanwhile, the sub-plots come thick and fast. Someone has been pinching knick-knacks. The boiler’s broken, although we know the oven still works because Lady Edith (Laura Carmichael) has a bun in it.

Oh, and Mr Barrow (Rob James-Collier), while fully recovered from the abrupt personality transplant that turned him from a pantomime villain into a dedicated butler, is still hiding his sexuality. He’s gay – and not in the 1927 sense of the word.

There are broader issues to grapple with, too.

Lady Mary (Michelle Dockery) is beginning to wonder whether the heyday of great landed families might be over.

Indeed, she is so remarkably modern that she uses the term ‘conspiracy theory’ fully 40 years before it was coined.

Still, Fellowes can be forgiven the odd anachronism, and for squeezing in too many storylines, which after all are only there as springboards for our favourite characters.

Happily, creepy Mr Bates (Brendan Coyle) doesn’t get much more than a limp-on part, to the relief of those of us who still rather wish he’d gone to the scaffold in series five.

And that is the key to enjoying this movie. There’s absolutely no point seeing it if you don’t already know who all these people are. If you do, how can you possibly resist?

Downton Abbey opens across the UK on Friday