Nick Cordero has tragically passed away after spending 95 days in hospital fighting for his life due to COVID-19 related complications.   The 41-year-old, whose Broadway credits include Rock of Ages and Waitress, died on Sunday at the Cedars-Sinai Medical Center in Los Angeles. Cordero’s death was announced by his wife Amanda Kloots in a heartbreaking post on

Nick Cordero has tragically passed away after spending 95 days in hospital fighting for his life due to COVID-19 related complications.

The 41-year-old, whose Broadway credits include Rock of Ages and Waitress, died on Sunday at the Cedars-Sinai Medical Center in Los Angeles.

Cordero’s death was announced by his wife Amanda Kloots in a heartbreaking post on Instagram. The couple share one child together, their one-year-old son named Elvis.

‘God has another angel in heaven now. My darling husband passed away this morning. He was surrounded in love by his family, singing and praying as he gently left this earth,’ she wrote.

‘I am in disbelief and hurting everywhere. My heart is broken as I cannot imagine our lives without him. Nick was such a bright light.’ 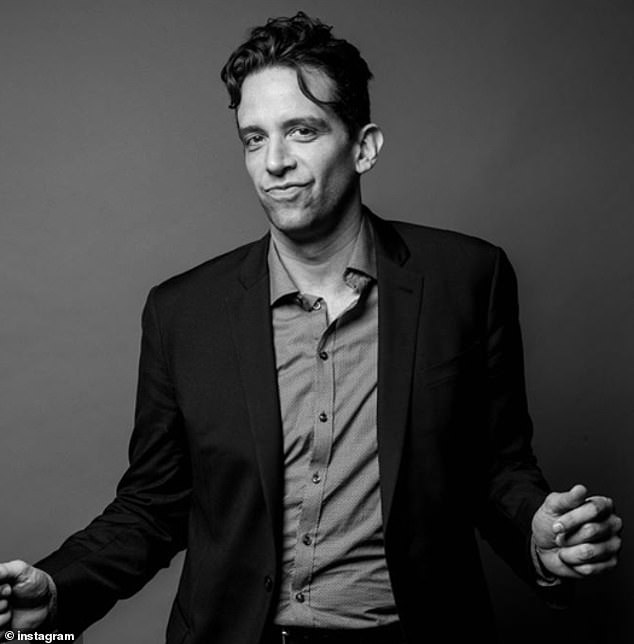 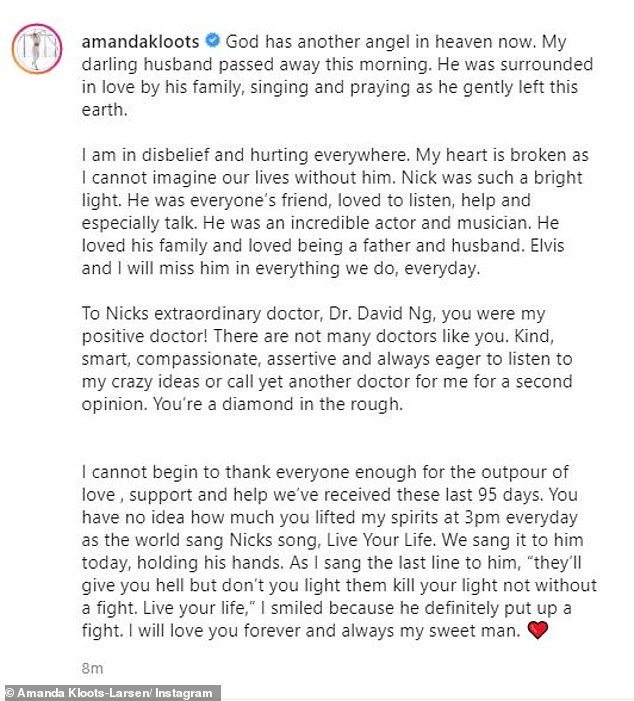 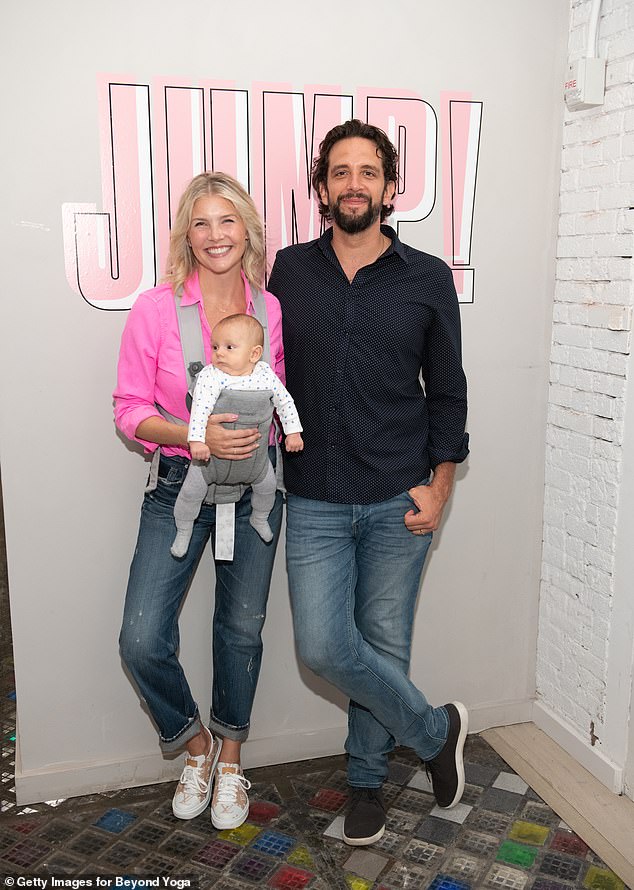 Cordero is survived by his wife, Amanda (left) and their son one-year-old son, Elvis

Kloots explained that Cordero was ‘was everyone’s friend, loved to listen, help and especially talk’ and that he was ‘an incredible actor and musician.’

‘He loved his family and loved being a father and husband. Elvis and I will miss him in everything we do, everyday,’ said Kloots, who shares one-year-old son Elvis with the actor. ⠀

She went on to thank the medical team that aided Nick in his tumultuous health battle.

‘To Nick’s extraordinary doctor, Dr. David Ng, you were my positive doctor! There are not many doctors like you. Kind, smart, compassionate, assertive and always eager to listen to my crazy ideas or call yet another doctor for me for a second opinion. You’re a diamond in the rough.⠀

‘I cannot begin to thank everyone enough for the outpour of love , support and help we’ve received these last 95 days. You have no idea how much you lifted my spirits at 3pm everyday as the world sang Nicks song, Live Your Life. We sang it to him today, holding his hands.

‘As I sang the last line to him, “they’ll give you hell but don’t you light them kill your light not without a fight. Live your life,” I smiled because he definitely put up a fight. I will love you forever and always my sweet man,’ concluded Kloots.

Cordero was first admitted to Los Angeles’ Cedars-Sinai Hospital in late March after initially being diagnosed with pneumonia.

Kloots revealed on March 31 that her husband was in intensive care and was having a ‘hard time breathing’. Days later, doctors confirmed Cordero was suffering from coronavirus after being tested three times.

She was unable to be at Cordero’s side in the hospital at the time  due to coronavirus safety guidelines and visitor restrictions at the hospital.

Initially, Cordero’s symptoms were intermittent. In an interview with Buzzfeed at the time, Kloots said the Broadway alum ‘could not get out of bed, so tired, no energy, that was really his only symptom.’

But his condition soon took a drastic turn for the worse, and shortly after being admitted to the hospital, Cordero was placed on a ventilator by doctors. 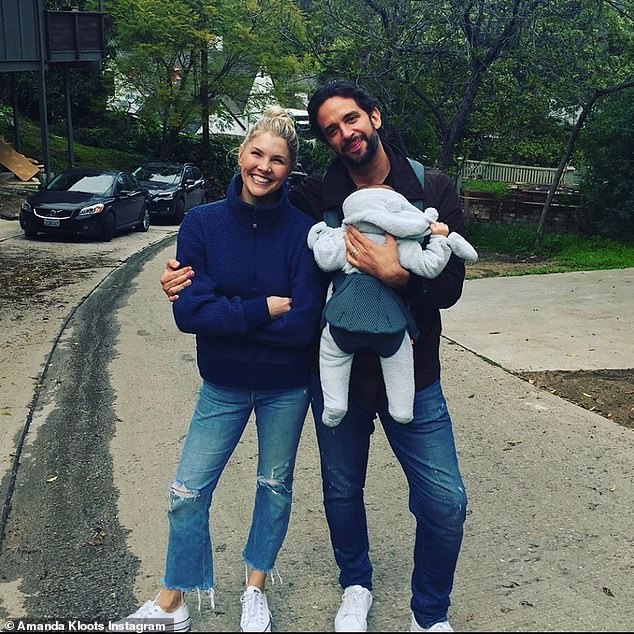 Lengthy battle: Nick Cordero has tragically passed away after spending 94 days in hospital fighting for his life due to COVID-19 related complications

The performer’s health initially stabilized in the hospital, but on April 10, Kloots revealed that her husband was ‘fighting for his life’.

‘We had really great progress and then yesterday I got a phone call saying he had an infection in his lung, a new infection, that caused his fever to spike way above normal, which caused his blood pressure to drop, which caused his heart to go into [an] irregular pattern,’ Kloots, a fitness instructor, said.

‘He lost consciousness, he lost his pulse and they had to resuscitate him. It was very scary. They had a very hard time getting him back.’

In the hours that followed, Kloots was told Cordero needed to immediately undergo emergency surgery after the ventilator he was placed on to support his heart and lungs was found to be obstructing blood flow to his right leg.

Cordero made it out of the surgery alive, however Kloots said at the time that he was ‘struggling’ and remained in a medically induced coma.

The following week, the Bullets Over Broadway star had to have his right leg amputated on April 18 after suffering from blood clots.

On April 24, Kloots shared that Cordero has tested negative for COVID-19, but within hours doctors were forced to instal a temporary pacemaker after he began experiencing irregular heartbeats.

The father-of-one then contracted a lung infection that spread into his bloodstream, causing septic shock, Kloots said.

She was later told that her husband’s lungs had been so severely damaged by the virus that it was ‘almost like he’s been a smoker for 50 years’.

‘They’re that damaged,’ Kloots said of her husband’s lungs on April 30. ‘There are holes in his lungs where obviously you don’t want holes to be.’ 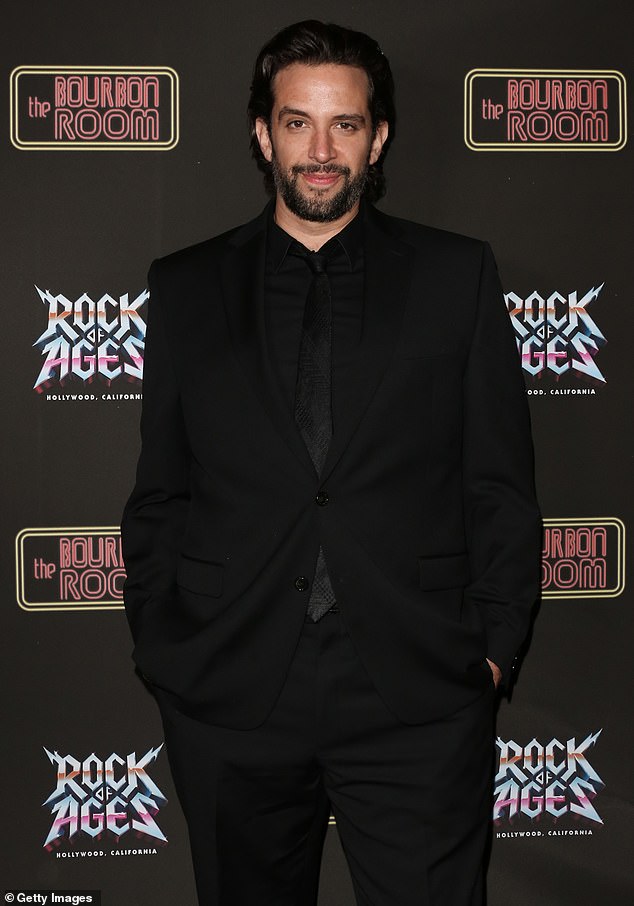 One of a kind: Amanda explained that Nick was ‘was everyone’s friend, loved to listen, help and especially talk’ and that he was ‘an incredible actor and musician’; Nick pictured in January of 2020 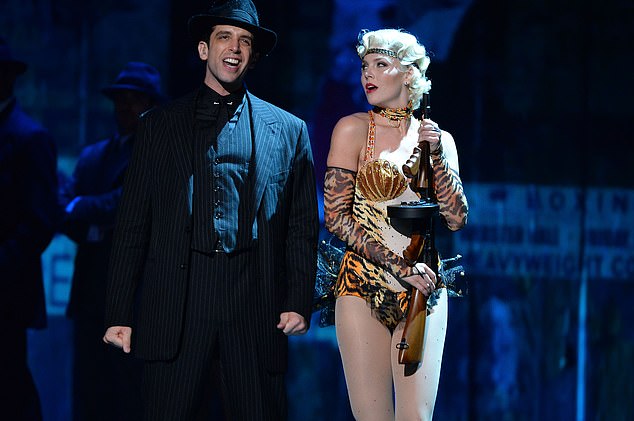 Before Cordero got sick in March, the couple had recently moved from New York to Los Angeles so the Broadway actor could star in Rock of Ages Hollywood (pictured: Nick Cordero and Helene Yorke and the cast ‘Bullets Over Broadway’ perform onstage during the 68th Annual Tony Awards at Radio City Music Hall on June 8, 2014)

Cordero then underwent a tracheostomy procedure and, two weeks later, he awoke from his medically induced coma on May 12.

He was said to be ‘extremely weak, so weak that he can’t close his mouth.’ However, Kloots says he was responding to instructions which suggested his ‘mental status is coming back’.

Cordero also continued to suffer various issues in his lungs. Despite doctors ‘cleaning out’ his lungs daily, Kloots said her husband was ‘not getting better’.

While admitted, Nick also endured numerous other complications, including two small strokes and ‘needed resuscitation’, according to Kloots.

In June, Kloots was finally able to visit Cordero in hospital for the first time nearly 80 days after he was first admitted.

‘He can’t talk because of the ventilator and he can’t move because he’s so weak,’ Kloots said in an Instagram post, sharing a photograph of her holding his hand. ‘But he’s awake and he’s in there. He can answer questions with yes or no with his eyes.’

Kloots also revealed that Cordero had lost 65 lbs during his battle with COVID-19, after his muscles began to atrophy due to his lack of movement. Cordero’s temporary pacemaker was then removed on July 2.

In a series of updates shared to Instagram this week, Amanda claimed that her husband was ‘doing slightly better’ after coming down from his blood pressure medication on Thursday.

In an interview with Gayle King on CBS This Morning, Amanda said that the ‘ultimate goal’ was for Nick to have a double lung transplant in order for him to live the life he ‘would want.’ 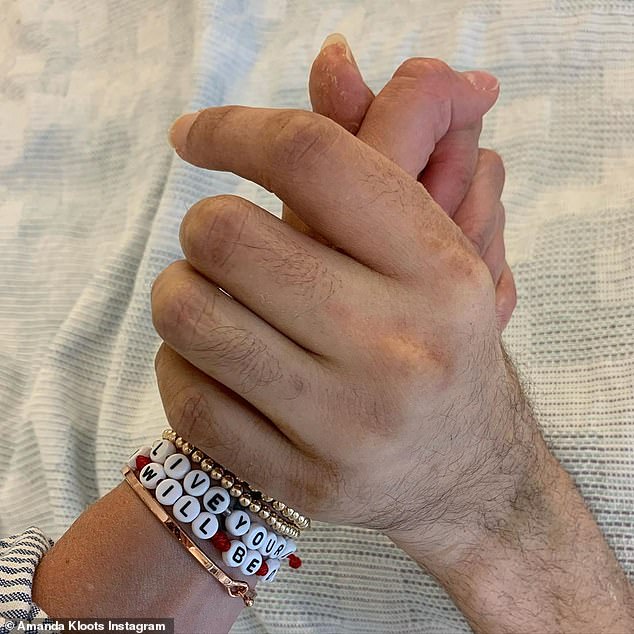 Battle: Cordero was first admitted to Los Angeles’ Cedars-Sinai Hospital in late March after testing positive for the coronavirus 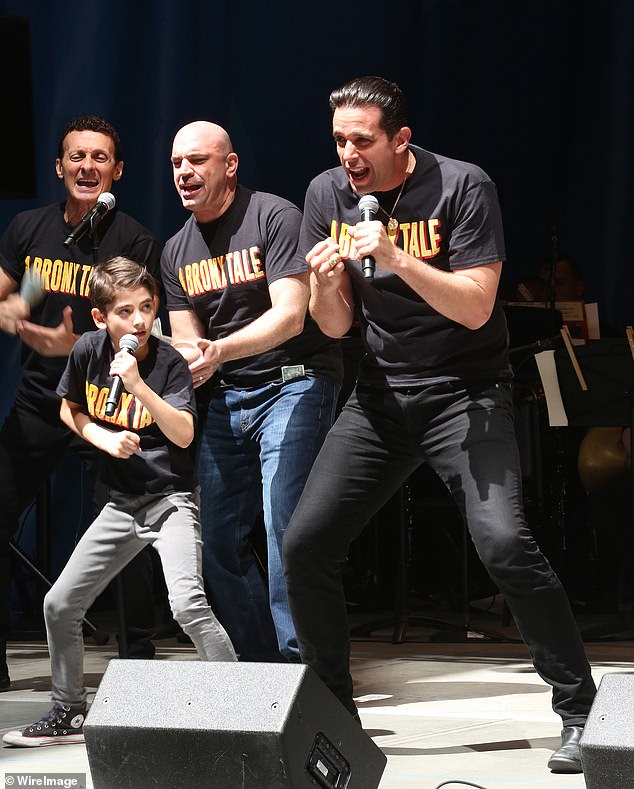 Cordero originated the role of Earl in the Broadway production of ‘Waitress,’ as well as the role of Sonny in the musical version of Chazz Palminteri’s ‘A Bronx Tale’ (above) 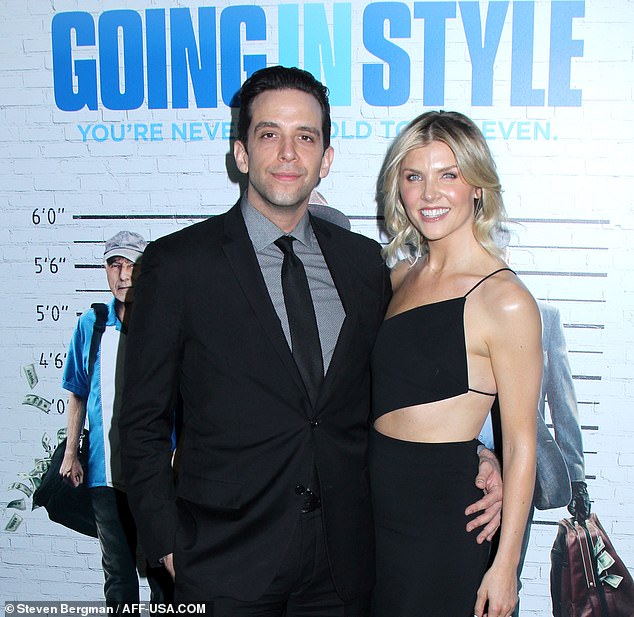 Cordero met Kloots, a former Broadway dancer, when they were both performing in Bullets Over Broadway, before tying the knot in 2017

But she warned that a ‘lot of things would have to line up’ in order for him to even be a candidate for such a procedure.

A GoFundMe set up in April by Amanda’s friends has already reached $593,573 to help with medical costs which at the time ‘had already started coming in’ according to the description on the fundraising page.

She had also also revealed this week that she planned to refinance the couple’s LA home to pay for medical bills.

Before Cordero got sick in March, the couple had recently moved from New York to Los Angeles so the Broadway actor could star in Rock of Ages Hollywood.

In the hours since his death was made public, tributes from fellow broadway stars and other celebrities have begun pouring in on social media.

‘Devastating. What a loss, what a light. Whole heart with Amanda and his family tonight,’ Lin-Manuel Miranda wrote on Twitter.

Actress Viola Davis penned a touching tribute to Cordero and remarked on the actor’s unimaginable battle on her Twitter page, as well.

‘RIP Nick Cordero! My condolences to you Amanda who fought and loved so hard….so sorry for his little one.

‘My heart is with you. May flights of angels,’ concluded the 54-year-old The Help star.

Heartbroken: Celebrities, such as Lin-Manuel Miranda, have taken to social media to honor the 41-year-old Broadway star and to send condolences to his wife Amanda Kloots, 38, and their son Elvis, one 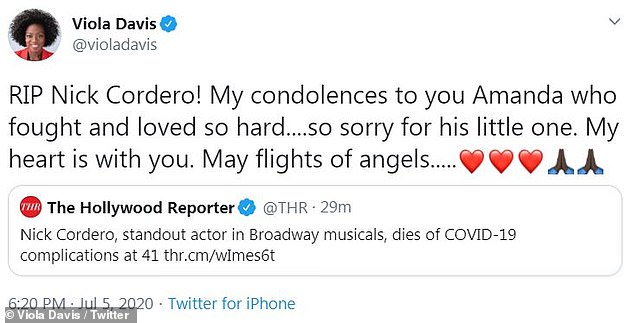 Unimaginable: Actress Viola Davis penned a touching tribute to Cordero and remarked on the actor’s unimaginable battle on her Twitter page, as well

Terrible: Crazy Ex-Girlfriend star Rachel Bloom deemed the news of Nick’s passing as ‘terrible’ and voiced her frustration with the virus, as a whole

Fought hard: ‘Rest in Power Nick Cordero. Such sad news. U fought so hard and are so loved. Prayers to your family and friends,’ wrote acclaimed songwriter Diane Warren on Twitter

One Of Us: Actor Donald Webber Jr. began his tribute by labeling the Bullets Over Broadway star as ‘one of us’ and that his passing is something that is ‘really hard to understand’

Modern Family alum Jesse Tyler Ferguson wrote about the ‘incredibly sad news’ that is Cordero’s passing, while urging the public to ‘do what we need to do as a country to fight this virus together.’

Sarah Michelle Gellar was at a loss for words upon hearing the news, but found a way to voice her sympathies in a lengthy text post uploaded to her Instagram page.

‘I’m not even sure what to say right now. Today @nickcordero1 lost his battle with covid. For everyone out there thinking this disease is harmless, it’s not.

‘Nick leaves behind a beautiful wife @amandakloots and the most precious son, who just celebrated his first birthday without his father,’ wrote Gellar.

Sarah noted that ‘because of this horrible disease we can’t even hug [Amanda]’ during her time of need, but that she wanted Amanda to know ‘there is an army of people here, ready to support you in ANY and EVERY way possible.’

‘I wish you understood the inspiration that you have been to so many, and I hope that brings you even the smallest bit of comfort through all this. But none of this is fair.’ 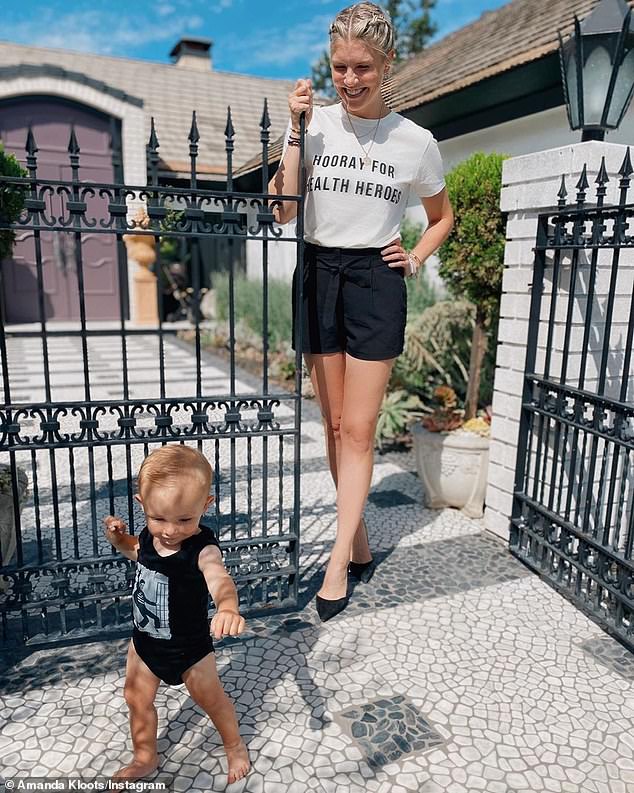 Big move: Before Nick got sick in March, the couple had recently moved from New York to Los Angeles so that the Broadway actor could star in Rock of Ages Hollywood; Amanda and one-year-old son Elvis on Instagram

Born in Canada, Cordero grew up in Hamilton, Ontario, before later moving to New York City.

In 2014, he was nominated for a Tony Award and a Drama Desk award for his role in  ‘Bullets Over Broadway’. He also won a Theatre World Award and Out Critics Circle Award for the same role.

Cordero originated the role of Earl in the Broadway production of ‘Waitress,’ as well as the role of Sonny in the musical version of Chazz Palminteri’s ‘A Bronx Tale.’

He also found success with performances on the small screen, starting in episodes of Law & Order: Special Victims Unit, Blue Bloods, and Lilyhammer.

Cordero met Kloots, a former Broadway dancer, when they were both performing in Bullets Over Broadway, before tying the knot in 2017.