Exeter guide: Where to eat, drink, shop and stay in Devon’s coastal capital

Stately and serene Exeter may not have quite the national stature it once enjoyed as a wool and tanning centre in Tudor times when it was one of the most populous places in Britain. But despite the passing of its Golden Age some four centuries ago, this cathedral city continues to beguile with its manicured 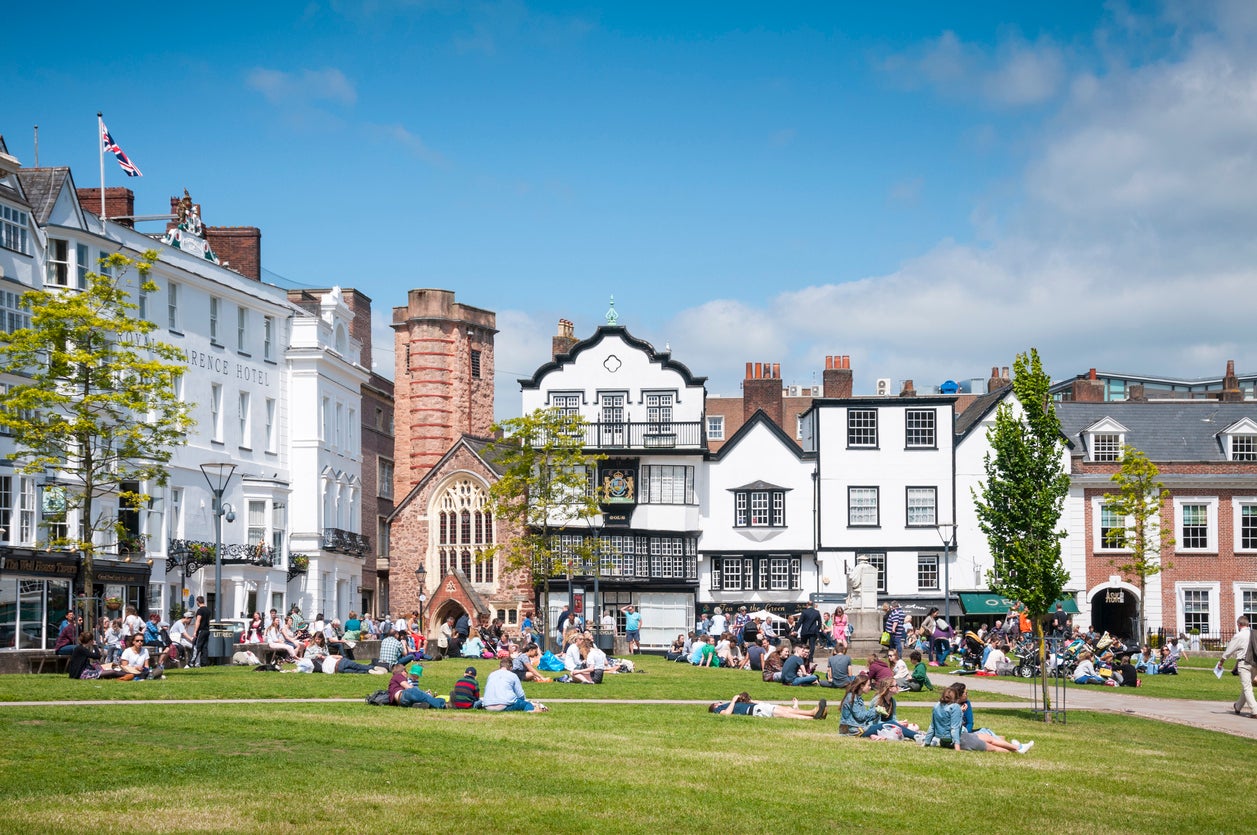 Stately and serene Exeter may not have quite the national stature it once enjoyed as a wool and tanning centre in Tudor times when it was one of the most populous places in Britain. But despite the passing of its Golden Age some four centuries ago, this cathedral city continues to beguile with its manicured gardens, a pleasing architectural mish-mash of styles and an unruffled feel where aimless wandering rather than attraction box-ticking is rewarded.

With Ryanair having launched flights to Malaga and Malta, among other destinations, from Exeter airport in April 2019, here’s how to spend some time away from the departure terminal, whether you have a few hours or an overnight to spend in this captivating South Devon hub.

There’s something of the Renaissance mindset about the Royal Albert Memorial Museum, which possesses one of the most wildly eclectic permanent collections of any museum outside London. Lose yourself in galleries with displays that zig-zag from a tiger shot by George V to treasure troves of Roman coins found in Devon fields to the wonderfully strange glass imaginary sea creature created by Steffen Dam.

What narrow, pedestrian-only Gandy Street (the hub of Exeter’s self-declared ‘Indy Scene’) lacks in size it makes up for in creative zeal with around a dozen independent stores. Pop into Moko for bespoke fashions and furniture and Chococo for outstanding chocolate fondues, brownies and sundaes. Harry Potter fans should take note – the street allegedly provided J K Rowling, who went to university in Exeter, with the inspiration for Diagon Alley.

Get your climb on

Looking for all the world like it was designed by Willy Wonka and Jeff Koons, the Quay Climbing Centre is a Technicolour riot of climbing walls in an old power station where even absolute beginners, under the guidance of wonderfully friendly instructors, can start tackling the ascents immediately.

Head to the Red Coat

Red Coat guides are completely free walking tours around Exeter. Simply turn up at the right place and you’re away. Themes include “Exeter during the Blitz” and “Forgotten Exeter”.

All roads in Exeter lead to the Cathedral and it’s a grandiose beauty indeed, built partially on the site of a Roman bathhouse. The two immense Norman towers flank a building containing riches including a 60ft bishop’s throne and sculptures of Alfred the Great, William the Conqueror and King Canute.

Originally designed to bring water into the city in the 13th century, Exeter’s Underground Passages have, somehow, survived centuries of development and Nazi bombardments to become a seriously spooky attraction in their own right. The network of passages stretches right across the city and, although tours tend to last no more than 25 minutes, you’ll almost certainly feel you’ve had enough of these dank, narrow tunnels by then. Definitely not for the claustrophobic.

Formerly the home of Captain William Fitzpatrick, an officer in the East India Company, the Southernhay House Hotel is a Grade II listed Georgian townhouse not far from the cathedral. Festooned with antique paintings of bygone sultans and admirals, rolltop baths, a seriously chic cocktail bar and a bag of Devon fudge on arrival, this is, by a comfortable margin, the finest boutique spot for miles around. Doubles from £105, B&B.

Headweir House, formerly the home of a mill owner (the mill itself is now a pub next door), has a light, contemporary feel inside with framed blueprints of the original mill and views out over the still gushing weir itself. Doubles from £75, B&B.

You can’t get more central than City Gate, a refurbed pub with rooms that is barely a minute’s walk from the Royal Albert Memorial Museum and Rougemont Gardens. The rooms are cosy but have a sprightly feel thanks to the colourful rugs, throws and cushions. Full marks for the complimentary pot of fudge and a carafe of sweet port on arrival. Doubles from £69, B&B.

Formerly a stone masons, Harry’s has been the standout locally owned restaurant in the city for the last 26 years. This is a steakhouse that deftly combines warm amber lighting with white tiled walls, red leather booths and dark woods to create a wonderfully seductive atmosphere. Faultless steaks are all sourced from AW Luscombe in nearby Totnes but the starters and sides, including velvety breaded bone marrow and unctuous mac and cheese, are absolute knockouts too.

Tea on the Green looks, from the outside, to be an average coach party centric tearoom opposite the cathedral. In reality, lunches here, including chicken, avocado and chorizo salads and gargantuan open sandwiches, are a triumph; with the meat all sourced from Halden Hill farm barely two miles away: you can even see its rolling meadows from the top floor window.

Located in the basement of what used to be a doctor’s surgery, Rendezvous is a cosy, stone-flagged, wooden-beamed nook just five minutes’ walk from the cathedral that has a vast, daily-changing menu that usually includes stone bass and crab from nearby Brixham.

Ethical pizza but without too much in the way of sanctimony is the modus operandi of The Flat, which boasts an all-organic menu featuring vegan and vegetarian options and with locally sourced ingredients coming to the fore on their “Truffle” pizza topped with blue cheese, courgettes and radicchio.

Owner and head chef Mike Barry has been serving high-end Brit-centric comfort food at The Conservatory for almost two decades now. Ask for a table in the upstairs dining room near the Tudor panelling (dating from 1600) and feast on the likes of crab crumpets and pork belly with braised red cabbage and celeriac fondant.

The Pursuit of Hoppiness may be a strong contender for worst pun in the history of British pub names, but the chunky pale wood tables are perfect for a long, lazy evening session among the more discerning students, bohemians and real ale aficionados of the city – many of whom make a beeline straight for the “Fridge of Dreams” containing all manner of ultra-obscure canned and bottled ales and IPAs.

Log fires, a snug, bow windows and a collection of ephemera including a poster for the 1970 World Cup and an ancient car horn make The Hourglass, open since 1848, the effortless front runner when it comes to authentic old-school boozers. Beers (served on request in four pint jugs) include ales from local breweries including Exe Valley and Dartmoor.

Situated in a former paper mill, just below Blackaller Weir, the brick walled Mill On The Exe is a two-floored, beamed-ceiling behemoth overlooking an almost obscenely pretty footbridge. To sip a toothsome pint of St. Austell Tribute on a summer’s afternoon on the terrace here is to experience Exeter living at its finest.

There’s a smokehouse, distillery and microbrewery all tucked away behind, and underneath, Victorian boozer the Fat Pig. Don’t miss the beautifully herby and well-smoked sausages as part of its Smokehouse Selection bar snack platter.

Victorian inspired cocktails are the theme behind Doctor Ink’s Curiosities. Barmen appropriately attired in tweed and facial hair create a half Dickens, half Dalston vibe down by the city quayside.

With a UK-wide reputation for excellence, Manson’s is a guitar shop with serious clout. Staff are surprisingly un-snooty and previous customers have included Jimmy Page and Noel Gallagher.

Running every Thursday from 9am-2pm on the corner of Fore Street, Exeter Farmer’s Market has an impressive range of local produce, including honey from Blackaller Bees and bottled real ales from The Exeter Brewery.

An immense selection of loose leaf teas, including local varieties Devon Duchess and Devonian Rose, are all blended by hand by the owners of the wonderfully named The House Of Hope and Mercy In The Jungle. It also offers tea tasting sessions and handmade teaware.

Once part of a Benedictine monastery, St Nicholas Priory dates back to 1087, though the style within is from the Tudor era, when the house became a family home after the dissolution of the monasteries. Note the Priory is only open for three hours on Sunday afternoons from 1-4pm.

The city centre is easily small enough to explore on foot but there is a decent bus network. Uber is also available. Be aware that Exeter St David’s station (on the mainline Great Western Railway route from London) is a 20-minute walk away from the city centre.

Sweeping views out over the city are best enjoyed with a glass of prosecco in hand from the Rooftop Bar at the Terrace, which also serves up some sybaritic food in the form of shredded duck flatbreads and huge beef sirloin sandwiches.

The Royal Albert Memorial Museum has, this year, begun a series of “RAMM Lates”: evening openings of the museum featuring everything from live DJ sets to dance performances and storytelling.