Follow live coverage of the Russian Grand Prix today, as Ferrari drivers Charles Leclerc and Sebastian Vettel aim to continue their good run of form. It was another fine day Ferrari in Singapore last weekend, with Vettel taking victory from team mate Leclerc. The two drivers have not yet made a sizeable dent in Lewis 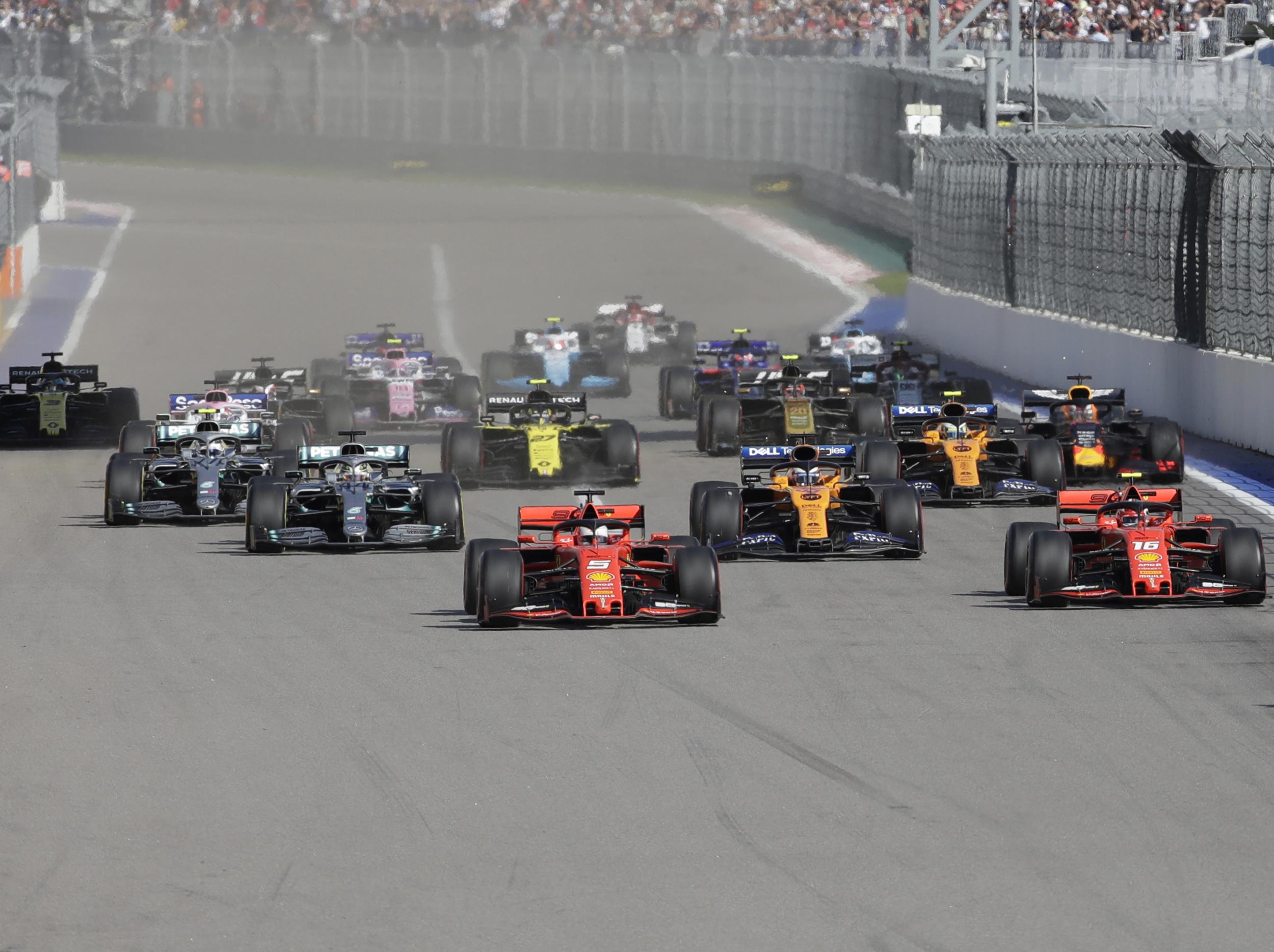 It was another fine day Ferrari in Singapore last weekend, with Vettel taking victory from team mate Leclerc. The two drivers have not yet made a sizeable dent in Lewis Hamilton’s rather large lead at the top of the Drivers’ Championship for the 2019 season, but will be looking to narrow the gap in Russia.

However, this is a favourite track for Mercedes – five wins in the five years since the Sochi circuit was introduced to the calendar suggests they find the going good. Hamilton has three of those victories, including last year, being let through by Valtteri Bottas after the Finn had taken pole.Follow live coverage of the Russian Grand Prix below:

Leclerc with a change of tyres as Ferrari look to regain control in this race. Hamilton and Bottas in P1 and P2.

Russel now into the barrier! Four cars out of the race now.

Vettel is OUT! Yellow flag is up, unbelievable! The German retires.

Leclerc comes out of the pits leading Vettel. Hamilton and Bottas one-two but they haven’t pitted yet.

Ricciardo in the pits and has now retired. A miracle he made it this far after that clash on the first lap with Giovinazzi.

Albon and Gasly going for it! Gasly wishes he was in that Red Bull still. Albon fends him off for now.

Mediums are on for Leclerc. He returns to the track in fourth. Now two Mercedes between the Monacan and his teammate in P1.

Ricciardo still struggling. It was Giovinazzi he clashed with on the first lap, not Grosjean. The Renault in 16th.

Albon in 12th having brake issues in the Red Bull. Leclerc meanwhile, his tyres looking good. Ferrari may switch to the mediums which could open the door for Hamilton.

Verstappen has completed his set of McLaren overtakes. He rounds Sainz into fifth. Now two Mercedes and two Ferraris to go. No biggy.

Vettel is four seconds ahead of his teammate, but Leclerc has been given the go ahead to push. A really fascinating contest for numerous reasons!

Ferrari discussed varying scenarios before the race, Leclerc feels Vettel ignored this. All we are missing now is for the two Ferrari’s to do a Rosberg-Hamilton-esque crash whilst fighting for pole.

Verstappen is relentless here. Sainz holding on to fifth but can expect a challenge soon. A poor qualifying for Red Bull hasn’t done too much to hold their star driver back.

Hulkenberg in ninth right on the tale of Perez in eighth. DRS should prove decisive soon.

Verstappen leaps Norris into sixth now. One McLaren down, one to go for the Dutchman in the Red Bull.

Ricciardo yet to recover from his first lap clash with Grosjean. The Aussie in the Renault is down in 16th.

Vettel is flying. Probably right to let the German push on, even if Leclerc is aggrieved. Meanwhile, McLaren have started brilliantly. Sainz and Norris in fifth and sixth.

Vettel with the fastest lap…I don’t think he fancies budging. It’s all political in the Ferrari team.

Where can I watch it?

Sky Sports F1 will show live coverage of the race. Their programming begins at 10.30m.

Highlights of the race will air on Channel 4. They start at 6.30pm on Sunday evening.

Can I stream the race?

Sky Sports subscribers can watch the race via the Sky Go app or via a web browser.

You can watch the Russian Grand Prix through Now TV via Sky Sports Day Pass for £9.99.

The Russian Grand Prix takes places at the Sochi Autodrom, with the circuit surrounding the site of the 2014 Winter Olympics.

What time is it?

What time does qualifying begin?

Qualifying follows the third practice session on Saturday, and should begin at 1pm BST.

What is our prediction?

Mercedes have not lost in Russia since the race was added back on to the Formula 1 calendar in 2014, and Lewis Hamilton will continue that streak this weekend.