Hundreds of demonstrators pour onto the streets of Belarus Belarus’s opposition leader said today she is ready to take power if president Alexander Lukashenko is toppled by mass protests – after Russia warned it could intervene to help the embattled strongman.  Svetlana Tsikhanouskaya, who has taken refuge in Lithuania amid fears for her safety, demanded new elections today and said she was ‘ready to

Belarus’s opposition leader said today she is ready to take power if president Alexander Lukashenko is toppled by mass protests – after Russia warned it could intervene to help the embattled strongman.

Svetlana Tsikhanouskaya, who has taken refuge in Lithuania amid fears for her safety, demanded new elections today and said she was ‘ready to take responsibility and act as a national leader during this period’.

‘I did not want to be a politician. But fate decreed that I’d find myself on the frontline of a confrontation against arbitrary rule and injustice,’ she said, having joined the presidential race after her other candidates including her husband were jailed.

Lukashenko – often described as the ‘last dictator in Europe’ – has launched a brutal crackdown after claiming victory in an election on August 9 that was widely seen as rigged.

Up to 200,000 people rallied in Minsk to demand his resignation on Sunday while the unrest has spread to factories and official media which are usually loyal to the president.

However, Vladimir Putin has told Lukashenko that Russia is willing to intervene under a military pact between the two ex-Soviet nations. 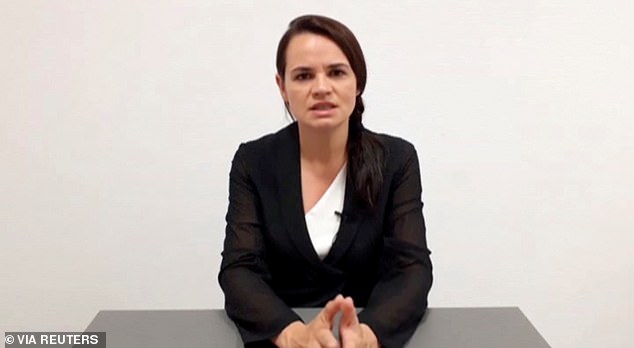 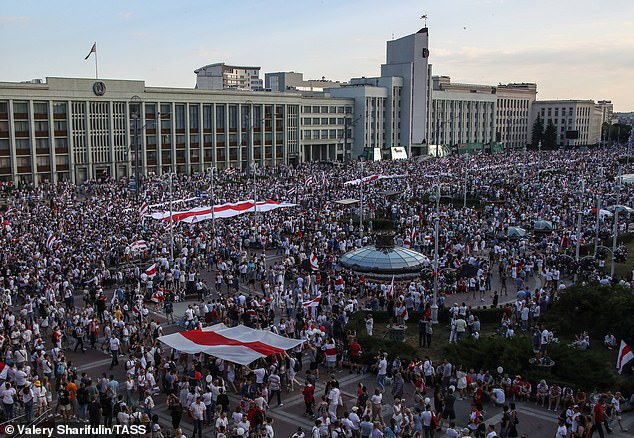 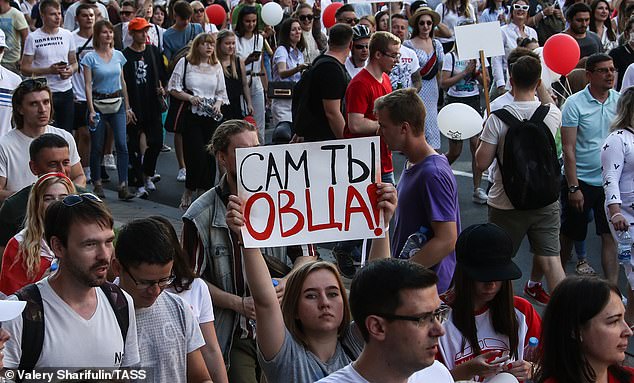 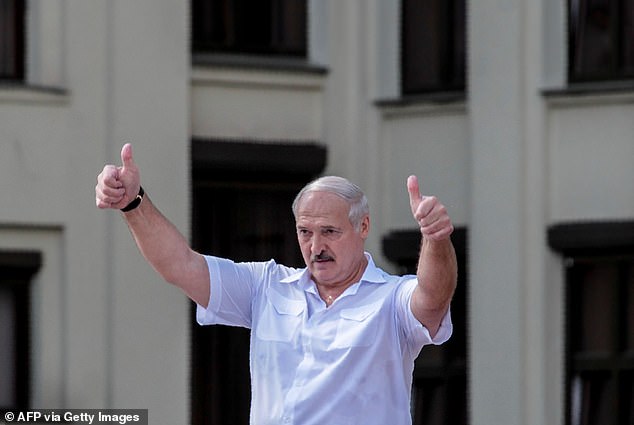 Lukashenko, 65, has called the Russian president twice as his fears of been overthrown by the protests have grown.

The Belarussian president claims to have won 80 per cent of the vote in the election earlier this month but the opposition have said the poll was fixed.

Britain today said the election was ‘fraudulent’ and said that ‘the UK does not accept the results’, calling for sanctions and a probe into the alleged poll-rigging.

‘The world has watched with horror at the violence used by the Belarussian authorities to suppress the peaceful protests that followed this fraudulent presidential election,’ foreign secretary Dominic Raab said.

Belarus’s former leader Stanislav Shushkevich, 85, said Lukashenko was facing the biggest challenge to his rule during his 26 years in power.

However, Shushkevich – an old political foe of Lukashenko – said the president was likely to survive with Russian backing.

‘You can’t say that the Lukashenko era is ending. I don’t think you can say that for one simple reason. Lukashenko serves the Kremlin because otherwise he wouldn’t be able to hold on,’ he said.

Moscow sees Belarus as a vital transit corridor for its oil and a buffer zone protecting Russia against the assembled NATO forces in Europe.

While military support may not be needed because of the size of Belarus’s own army, the Kremlin could also prop up the economy with financial help, Shushkevich said.

‘In such conditions, it’s difficult for the beaten and tortured Belarusian opposition to struggle with Russia,’ he said.

He also ruled out a palace coup, saying: ‘Over 26 years, Lukashenko has chosen very obedient deputies and very obedient military… they are handsomely paid.’ 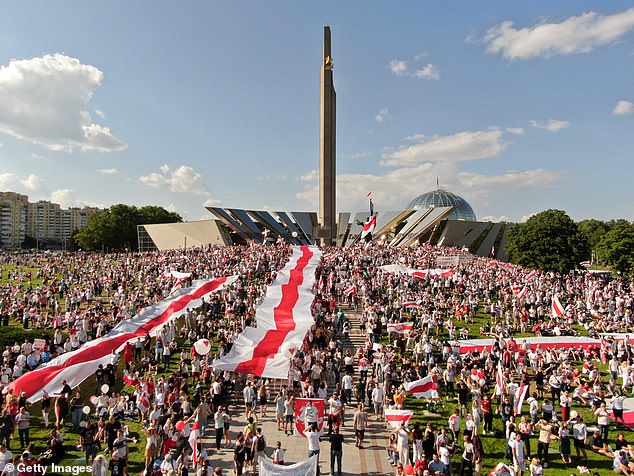 In the days after the election, police and security forces used extreme violence in an attempt to stop demonstrations, using mass arrests and beatings.

Nonetheless, protests continued for an eighth day on Sunday with up to 200,000 people gathering in Minsk to demand Lukashenko’s resignation.

Demonstrators held placards with slogans such as ‘You can’t wash off the blood’ and ‘Lukashenko must answer for the torture and dead’.

Workers at state-owned factories that make cares and tractors went on strike on Friday, despite the president usually enjoying strong support among state employees.

Other major towns and cities in the ex-Soviet country also saw large rallies, while there were also shows of support in the Czech Republic, Romania and Poland.

Unusually, tightly-controlled state television aired a short item on the ‘alternative protest’ in Minsk, while not showing anti-Lukashenko slogans.

The protests have been described as the largest in the country’s post-Soviet independence.

The demonstrations were called by Tikhanovskaya, 37, the leading opposition candidate who claims to have won the election but has now fled to Lithuania.

‘I am ready to take responsibility and act as a national leader during this period,’ Tsikhanouskaya said in her video message today.

The former English teacher has called for anti-government demonstrations to continue to keep the pressure on Lukashenko. 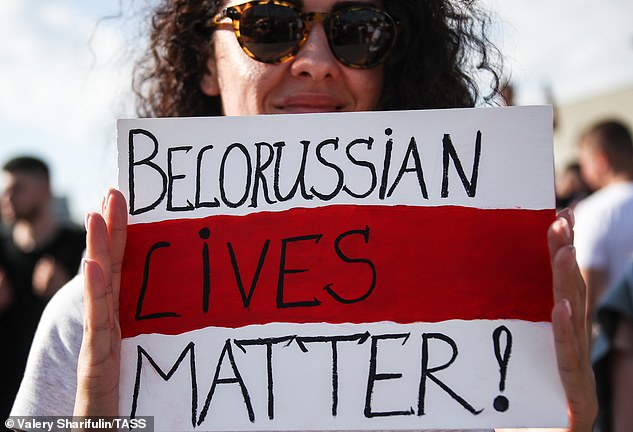 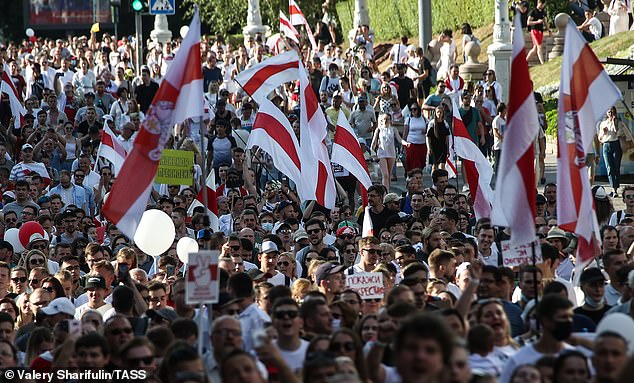 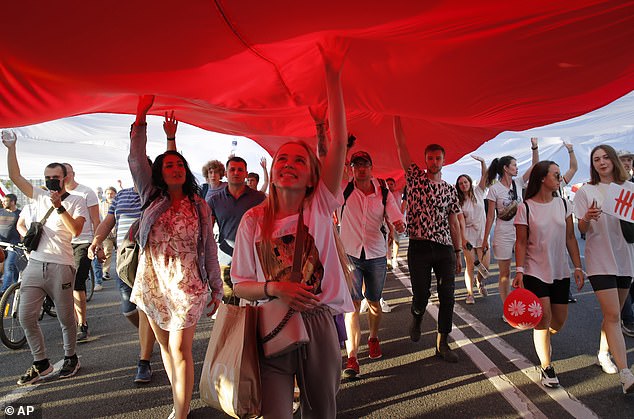 A crowd of people raise their hands and lift up the Belarusian flag during a rally in Minsk, Belarus 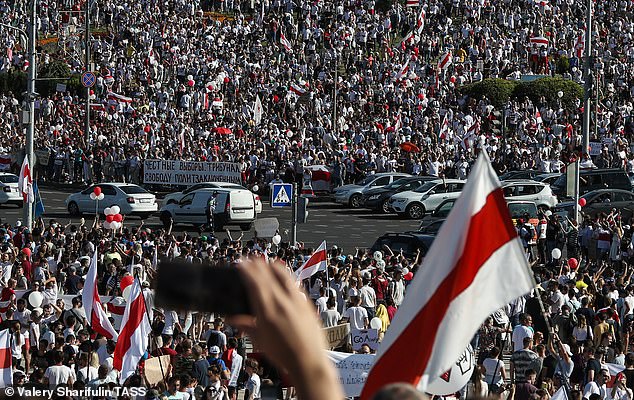 Lukashenko has claimed that Poland, Latvia and Lithuania are involved in a ‘build up of military might’ on the country’s borders and in response his regime has announced military exercises close to the Lithuanian frontier.

Yesterday he said: ‘NATO troops are at our gates. Lithuania, Latvia, Poland and our native Ukraine are ordering us to hold new elections.

Lukashenko added that Belarus would ‘die as a state’ if new polls were held.

He said: ‘I have never betrayed you and will never do so.’

Putin has told Lukashenko that Russia is prepared to assist and ‘solve the problems that have arisen’ from ‘external pressure’, the Kremlin said, backing Lukashenko’s claims that the protests are part of a Western plot to oust him.

There was also a pro-Lukashenko rally yesterday although opposition media claimed the crowd had been coerced into attending.

The Belarus Interior Ministry said there were no arrests at Sunday’s rallies, although local media reported a few people had been detained.

The opposition also published footage of Belarus’s ambassador to Slovakia, Igor Leschchenya, expressing his solidarity with protesters and saying he was ‘shocked by stories of torture and beatings.

State employees, including some police officers and state TV staff, have come out in support of the protests and some of the country’s biggest state-run plants have been hit by protests and walkouts.

The EU is gearing up to impose new sanctions on Belarus in response to the violent crackdown. 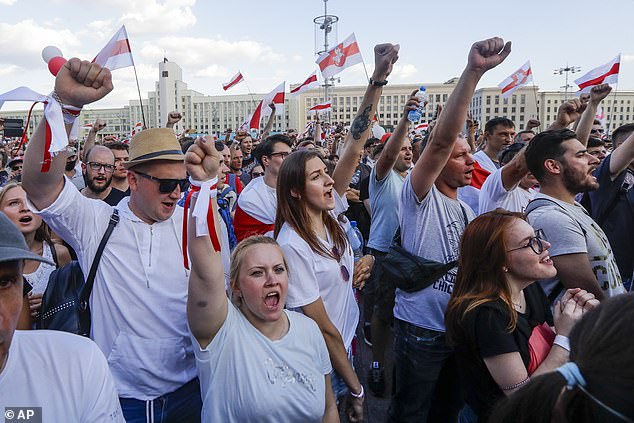 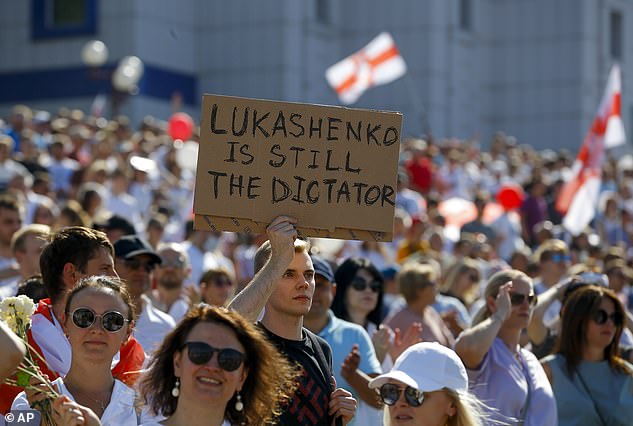