‘I’ll cut you up’: Two boys are seen threatening employees outside Asda

‘I’ll cut you up’: Shocking footage shows the moment two boys threaten employees outside Asda before one is forced to apologise by his dad – who admits he is ‘humiliated and mortified’ by his son’s behaviour Video shows two boys intimidating Asda employees outside of Gosport store Staff attempt to guard the entrance to supermarket

‘I’ll cut you up’: Shocking footage shows the moment two boys threaten employees outside Asda before one is forced to apologise by his dad – who admits he is ‘humiliated and mortified’ by his son’s behaviour

By Emily Webber For Mailonline

Shocking video footage has revealed the moment two boys were seen threatening staff outside Asda before one of their father’s drags him back to the store to apologise.

In the short clip, the two boys can be seen intimidating employees outside of the Asda store in Gosport, Hampshire, as staff attempted to guard the entrance to the supermarket on Bank Holiday Monday.

One boy can be heard shouting at an employee: ‘I’ll jump on his head fam – do you understand?’

As the member of staff begins to slowly walk towards the boys, she is quickly pulled back by a fellow colleague. 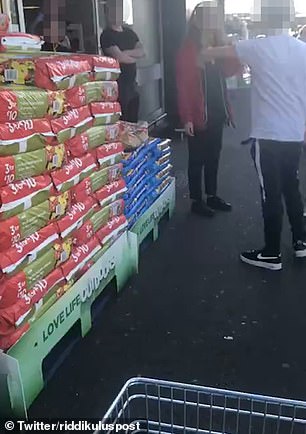 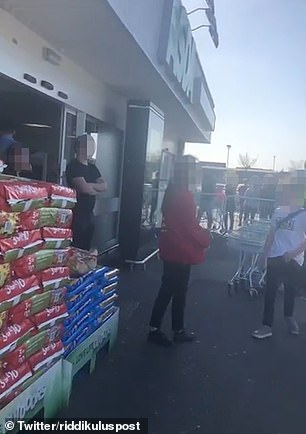 A boy is seen intimidating employees outside of the the Asda store in Gosport, Hampshire. An employee begins slowly walking towards the boys but is quickly pulled back by a colleague (pictured left, and right)

‘I am going to come Asda later’, one boy shouts, while another adds: ‘I’ll cut you up’.

As the boys pick up their bikes, one woman asks: ‘How old are you three?’ to which the group retaliates, with one boy shouting: ‘What are you f***** laughing at?’

Another grabs his bike and says: ‘How old are you, you look about 80-years-old.’ 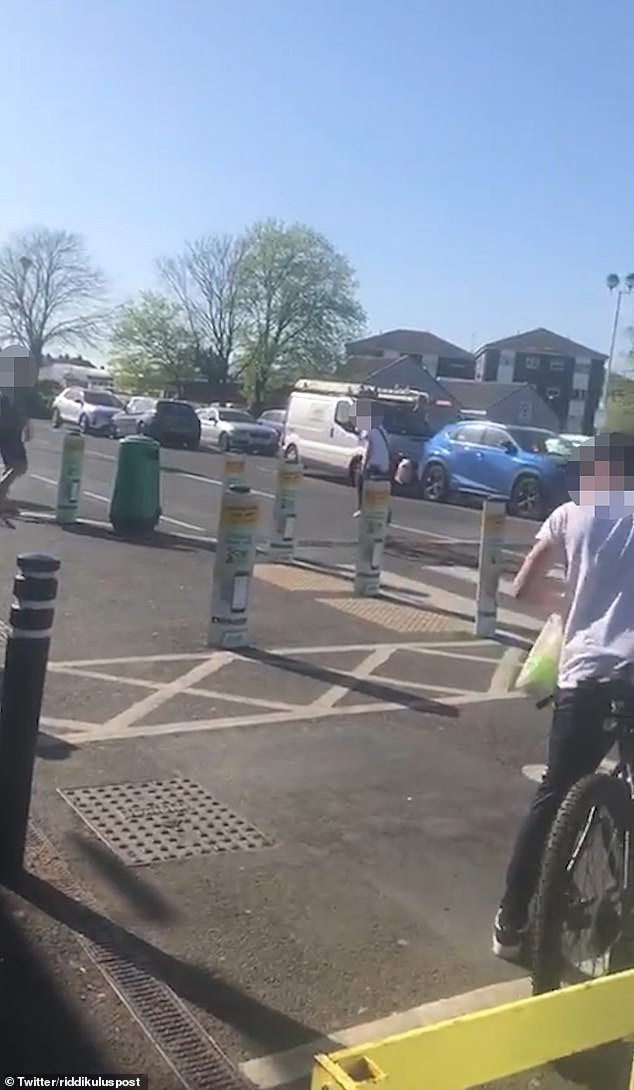 The incident was posted on Twitter by a woman from Gosport captioned: ‘My stepdad got a shot of Gosport finest outside Asda this afternoon.’

She added: ‘Update: anyone who wants to know one of them was dragged back by his dad to apologise. The video is on Gosport aware Facebook page if you want to watch it. You can call my stepdad the Gandhi of Gosport.’

One of the boy’s fathers posted a picture and video of his son apologising to Asda staff and described how he has ‘never been more disgusted and mortified’ by his child.

The boy is seen with his hands in his pockets as he says: ‘I didn’t mean for any of this to happen I was just angry.’

His father then makes him apologise to all the staff at Asda before calling him a ‘vile-mouthed little b*****d.’

The father said Hampshire Police were notified when his son did not return from his daily exercise and added: ‘Both myself and my wife take the Covid-19 pandemic very seriously.

‘For everyone who has seen a video of this boy threatening members of staff at Asda yesterday.

‘As a dad I have never been more disgusted and mortified with my son in my life. He has not been brought up to behave in this manner and I do not condone his behaviour at all. 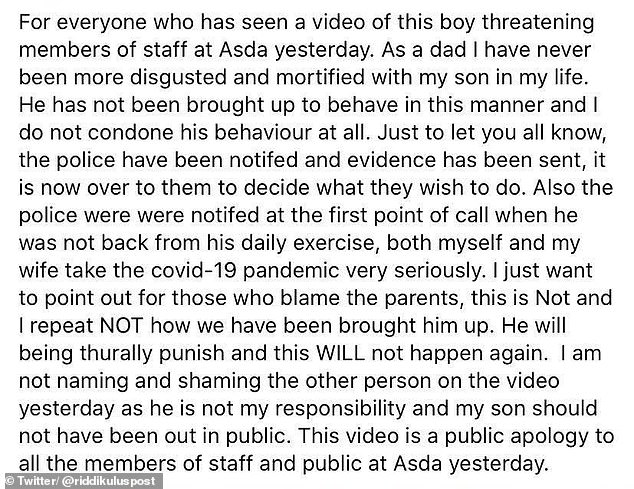 ‘Just to let you all know, the police have been notified and evidence has been sent – it is now over to them to decide what they wish to do.

‘Also the police were notified at the first point of call when he was not back from his daily exercise.

‘Both myself and my wife take the Covid-19 pandemic very seriously. I just want to point out for those who blame the parents this is not, and I repeat not, how we have brought him up.

He ended: ‘This video is a public apology to all the members of staff and public at Asda yesterday.’

A spokesman for Hampshire Police said: ‘We received a report just after 4.30pm on 13 April regarding an assault at the Asda store on Dock Road, Gosport.

‘Officers are aware of the video circulating and this incident is being investigated. We ask that anyone with information call 101, quoting 44200131031.’