Man who pushed boy, 6, from Tate gallery ‘wanted to be on TV’ Jonty Bravery, 18, from Ealing, west London , said to detectives after he was arrested that he had planned in advance to hurt someone at the art gallery on that date A teenager who tried to kill a six-year-old boy by throwing him off a tenth-floor balcony at the Tate Modern was seen on CCTV 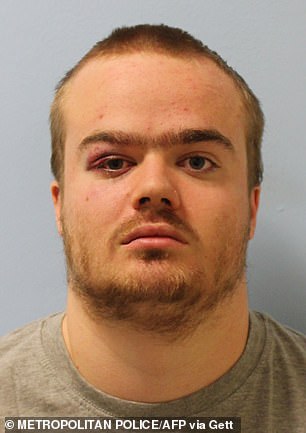 Jonty Bravery, 18, from Ealing, west London , said to detectives after he was arrested that he had planned in advance to hurt someone at the art gallery on that date

A teenager who tried to kill a six-year-old boy by throwing him off a tenth-floor balcony at the Tate Modern was seen on CCTV ‘scooping up’ his victim before throwing him over the railings, laughing and telling the child’s father ‘I’m mad’.

Jonty Bravery, 18, from Ealing, west London, picked up the young French boy and threw up over the railings, causing him to fall more than 100ft on to a roof five floors below.

Bravery had researched the easiest way to kill someone in advance of the incident, on August 4 last year, and had ‘searched for the most vulnerable child’ , a court heard.

He later told medical experts he felt ‘undestructable’ (Sic) and ‘on top of the world’ after throwing the boy off the viewing platform.

The victim, who was on holiday in London from France and who cannot be named for legal reasons, survived the fall but suffered serious injuries.

Today, at the Old Bailey in London, Bravery appeared for sentencing after admitting to a charge of attempted murder at a hearing in December.

But his sentencing was adjourned until tomorrow morning by judge Mrs Justice McGowan, who said ‘this is obviously not a straightforward case’.

Today the court was told how Bravery carried out the attack on his victim ‘without any hesitation’.

Prosecutor Deanna Heer said: ‘As (the boy) approached, the defendant scooped him up and, without any hesitation, carried him straight to the railings and threw him over. 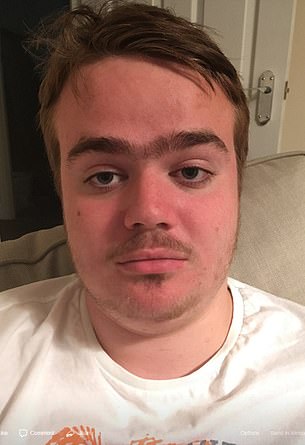 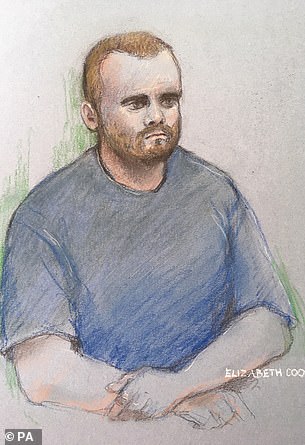 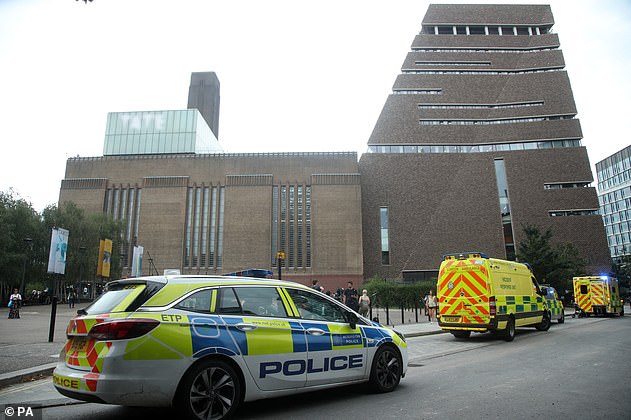 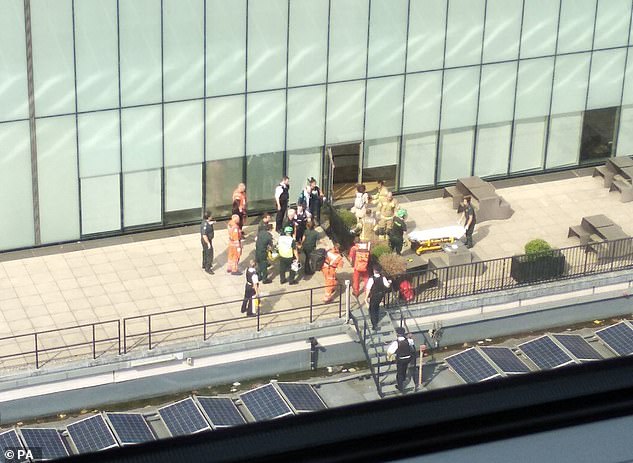 The victim, visiting the London museum with his French family, plunged 100ft on to a roof five floors below (pictured, the aftermath)

‘The CCTV footage shows (the boy) falling head-first towards the ground.’

Ms Heer said CCTV also showed the defendant backing away from the railings.

Boy, six, who was pushed from the 10th floor of the Tate Modern nine months ago ‘is walking again for the first time’

The six-year-old boy who was seriously injured when he was thrown from the 10th floor of London‘s Tate Modern art gallery is taking his first steps, his family revealed last month.

The French infant, who was on holiday in London with his family, ‘has continued to make progress’ since the attack, according to his relatives.

He suffered life-threatening injuries, and spent over a month in hospital in the UK before being discharged to a hospital in France.

In a post on a GoFundMe page, which has raised more than £206,000 for the boy’s treatment and rehabilitation, his family said: ‘Despite appalling conditions of confinement at the hospital, we are happy to announce that our little knight has continued to make progress.

‘Finally, as he has muscled his thighs well, he can now carry his own weight.’

Despite the child’s magnificent recovery, the family have been warned that it could take up to three years before he is able to eat as normal.

He remains in a wheelchair, and will require 100 per cent care support until at least August 2022, a court heard today.

Following a question from the judge, Prosecutor Deanna Heer said: ‘Whether he will ever make a full recovery is not known.’

She said: ‘He can be seen to be smiling, with his arms raised. At one point, he appears to shrug and laugh.

‘The footage also captures (the victim’s) parents’ disbelief and rising panic at what had just happened.’

She said the boy’s father initially thought the incident was ‘a joke’ until he saw his son’s distorted body below.

Challenged by the father, Bravery said: ‘Yes, I am mad,’ the prosecutor said.

The prosecutor said the boy’s mother was becoming ‘increasingly hysterical’ after witnessing the incident. She said Bravery had ‘a big smile on his face’.

The boy’s mother tried to climb over the railings to get to her son, but was held back by staff, the court heard.

The prosecutor said Bravery ‘sniggered’. Asked why he had done it, Bravery said: ‘It’s a long story.’

He was also heard to say: ‘It’s not my fault, it’s social services’ fault,’ with a shrug, the prosecutor said.

Following his arrest, Bravery was said to have asked police if he was going to be ‘on the news’.

He said that he had been ‘seriously unhappy’ recently and had been ‘hearing voices’ telling him to hurt and kill people for the last couple of months.

Ms Heer said: ‘He said he had to prove a point to ‘every idiot’ who had ever said he did not have a mental health problem that he should not be in the community.’

He said he had been planning the incident for a long time, the court was told.

A report into Jonty Bravery’s behaviour, carried out after the incident, found ‘his callousness and the striking lack of emotional empathy… is not typical of autism but is more typically found in psychopathy’.

The prosecutor, citing the report, added: ‘The defendant fully understood the consequences of his actions and was capable of exercising self-control to resist acting in the way that he did.’

She told the court Bravery was a ‘looked-after child’ under the care of Hammersmith and Fulham Social Services at the time of the incident.

He was living in supported accommodation and had autism, she said. 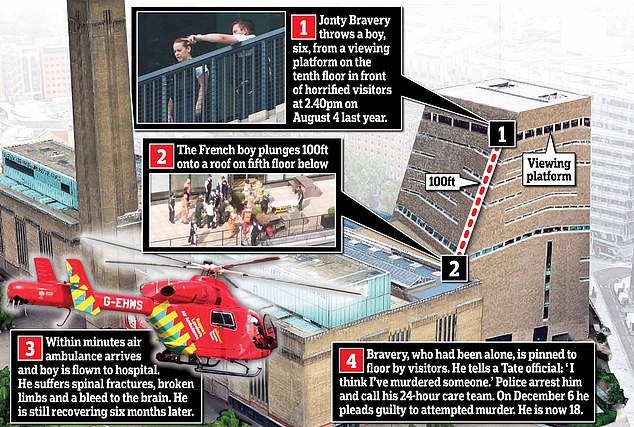 The youngster was airlifted to hospital in a critical condition with fractures to his spine, legs and arms and a bleed on the brain. He remains in hospital, severely disabled (pictured, how the horror incident unfolded)

He received specialist care following an assault on a female care worker in October 2017, but was ‘frequently aggressive to staff’ and was also abusive and failed comply with boundaries, the court heard.

Ms Heer said Bravery, who was 17 at the time of the incident, was under one-on-one supervision but was allowed to go out unaccompanied for four-hour periods.

He left his property around midday, bought an Oyster card, and travelled from his accommodation in Northolt to London Bridge, arriving at 1.10pm.

Ms Heer said he went to the Shard and inquired about buying a ticket for the viewing area, but found he did not have enough money.

He later made his way on foot to the Tate Museum, arriving at around 2.15pm, shortly before the incident took place.

At his previous hearing, the court heard how after Bravery was arrested that he told detectives he had planned in advance to hurt someone at the art gallery on that date.

The court heard he snatched the child from his mother’s arms and hurled him from the tenth floor in front of horrified on-lookers.

The young victim, who has still not recovered mobility in his limbs or cognitive capacities, was visiting London with his French family and fell 100ft on to a roof five floors below.

The Crown Prosecution Service said that when he was arrested, Bravery told police that he had planned in advance to hurt someone at the Tate Modern on August 4, so that he could be on TV.

It was reported at the time that Bravery, who has autistic spectrum disorder and obsessive compulsive disorder, manged to slip free of his minders who were accompanying him on a trip to the Tate.

The six-year-old survived but suffered terrible injuries including a bleed on the brain, broken arms and legs, and a fractured spine. He was left unable to move, eat normally or speak.

The boy, who cannot be named for legal reasons, had to undergo several operations and spent months in hospital in London.

He remains in a wheelchair, and will require 100% care support until at least August 2022, the court heard.

Turning 18 brought an unusual rite of passage for Jonty Bravery – his identity, as the suspect in one of the country’s most high-profile cases at the time, was no longer a secret.

At the stroke of midnight on October 2, Bravery turned from child to adult. In doing so, the usual protections associated with juvenile defendants involved in criminal cases also slipped away, after an Old Bailey judge ruled he could be named by journalists.

But his loss of anonymity was not for the want of trying.

Following Bravery’s guilty plea, entered on Friday, it can now be reported that the London Borough of Hammersmith and Fulham Council joined Bravery’s family in seeking a new, short-term ban on his identity being made public upon reaching his 18th birthday while he waited to be transferred from Cookham Wood young offenders institute to the better-suited Broadmoor Hospital.

His defence team asked the judge to consider how Bravery’s mental state had deteriorated during his time in Cookham Wood as his identity began to surface, and that further disruption could impact on his ability to instruct solicitors.

Journalists disputed the claim, stating that naming the defendant would not cause a substantial risk to the administration of justice and that he did not deserve any special treatment.

The judge, Nicholas Hilliard QC, declined to introduce a reporting restriction, although a ban on publishing details about the hearing remained in place until Bravery entered a guilty plea.

Judge Hilliard said: ‘Even to say there is a risk (of prejudice) is entirely speculative. There is no basis for making a (new) order… and the existing order will lapse when the defendant turns 18.’

The council said it spent £500 at the hearing in its attempt to keep Bravery’s name withheld, following a Freedom of Information Act request from the PA news agency.

However, the authority – responding on October 31, just over four weeks after the hearing – said the total cost was ‘not known until all invoices are received’.