A large number of overs 50s could be given orders to stay at home as part of Boris Johnson‘s ‘nuclear plans’ to avoid another national lockdown. In a more ‘segmented approach’ to dealing with future lockdowns, people aged between 50 and 70 would be given personalised risk ratings – taking into accounts factors like their

A large number of overs 50s could be given orders to stay at home as part of Boris Johnson‘s ‘nuclear plans’ to avoid another national lockdown.

In a more ‘segmented approach’ to dealing with future lockdowns, people aged between 50 and 70 would be given personalised risk ratings – taking into accounts factors like their age and conditions – and asked to shield in the event of an outbreak.

The plans could prove controversial as the factors under which the elderly could be asked to self-isolate might be more heavily influenced by age than clinical vulnerabilities.

The advice for shielding was only lifted on Saturday for those in England, Scotland and Northern Ireland, and remains in place until August 16 for those shielding in Wales.

It comes after Mr Johnson was forced to announce a slow down of the lockdown easing on Friday, with planned relaxations for the leisure and beauty sectors delayed after a rise in Covid-19 cases was recorded, with prevalence in the community thought to be rising for the first time since May.

In other developments yesterday: 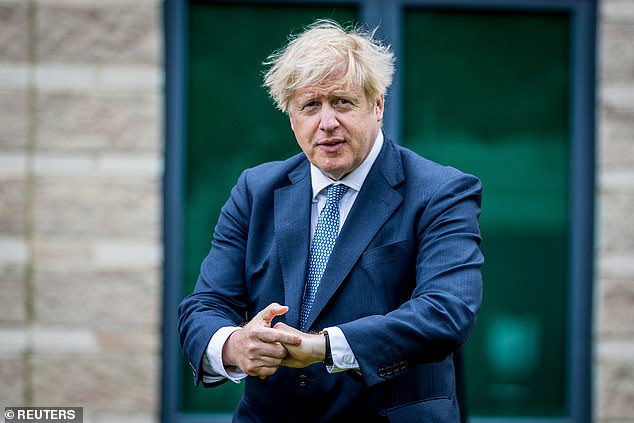 ‘At the moment, shielding is binary, you’re either on this list or off it,’ a source told the Sunday Times.

‘But we know there isn’t a simple cut-off at age 70. People would get a personalised risk assessment. The risk rises after 50, quite gently to start with, and then accelerates after age 70.’

The Prime Minister held a ‘war game’ session with Chancellor Rishi Sunak on Wednesday to run through possible options for averting another nationwide lockdown that could stall any potential economic recovery, according to the newspaper.

It is believed Mr Johnson last week compared the prospect of a full national lockdown to a ‘nuclear deterrent’ to be as a last resort, but aides now say he is wants smaller ‘tactical’ nuclear weapons with which to fight covid-19.

Along with the head of the Covid-19 taskforce, Simon Case, Mr Sunak and other senior figures, the group held an hour-long discussion on three outbreak scenarios; one in northwestern England, one in London and finally a general increase across the country. 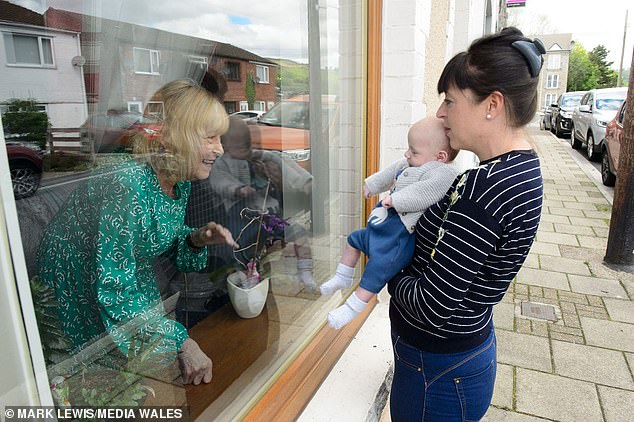 In a more ‘segmented approach’ to dealing with future lockdowns, people aged between 50 and 70 would be given personalised risk ratings – taking into accounts factors like their age and conditions – and asked to shield in the event of an outbreak

A significant proposal in the national model was reimposing the shielding programme, based on their age or particular risk factors that have been identified since March.

Other ideas mooted should the R-rate escalate in the capital include restricting travel beyond the M25 and putting a stop to staying at other people’s houses – similar to policies implemented in local lockdowns imposed in Leicester and parts of the north-west of England in recent days.

And in a move that would burst the public’s figurative ‘bubbles’, ministers could ban mixing of households indoors (including overnight stays), as has happened in the nine local authorities under a partial lockdown in north west England.

The move could have been inspired by test and trace data seen by Health Secretary Matt Hancock just before the meeting which showed that the top two ways the virus was transmitted were by an infected person visiting the subject’s house, and by that person visiting an infected friend. 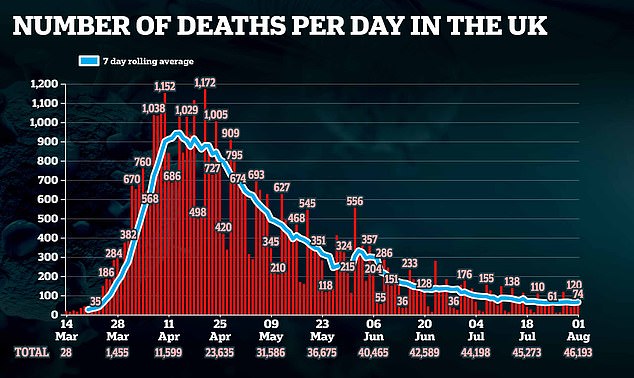 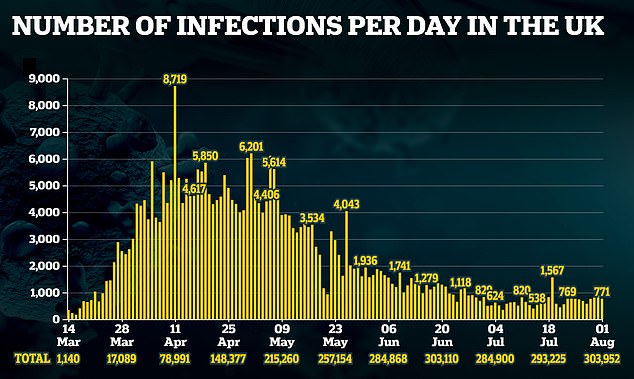 Coronavirus cases in England are now at the highest levels since May and government scientists are ‘no longer confident’ the crucial R rate is below the dreaded level of one.

Government statisticians yesterday admitted there is ‘now enough evidence’ to prove Covid-19 infections are on the up, calculating that 4,200 people are now catching the virus each day in England alone.

The estimate by the Office for National Statistics, which tracks the size of the outbreak by swabbing thousands of people, has doubled since the end of June and is 68 per cent up on the 2,500 figure given a fortnight ago.

One in 1,500 people currently have the coronavirus – 0.07 per cent of the population. But experts believe the rate is twice as high in London and still rising. The figure does not include care homes and hospitals.

Number 10’s scientific advisers also upped the R rate in the UK, saying they now believe it stands between 0.8 and 0.9. It had been as low as 0.7 since May.

SAGE also revealed the growth rate – the average number of people each Covid-19 patient infects – may have jumped to above one in the South West, home to the stay-cation hotspots of Devon, Cornwall and Dorset. And they said it was likely to be equally high in the North West. Matt Hancock last night announced tough new lockdown measures in Greater Manchester and parts of Lancashire and Yorkshire.

Going to work was only third on the list and going out shopping lower still.

But Downing Street sources distanced themselves from the detail in the reports, calling them ‘speculative’.

On top of the alleged lockdown avoidance preparations, experts have speculated that ministers might have to order the closure of pubs, which were permitted to start serving again on July 4, if schools are to reopen fully in September.

Professor Graham Medley, a member of the Scientific Advisory Group for Emergencies (Sage), said earlier a ‘trade off’ could be required if the Prime Minister’s pledge is to be met.

His comments followed chief medical officer Professor Chris Whitty’s remarks that the country was ‘near the limit’ for opening up society following the coronavirus lockdown.

The moves in Whitehall are seen as a clear indication that ministers are prepared to dial down social interactions to ensure that schools can open again next month and shops can keep doing business.

Boris Johnson previously pledged that all pupils at both primary and secondary schools in England will return in September, following months of closures for most students.

But leading scientists and the head of a major teaching union last night amid signs that cases of Covid-19 are increasing again at an alarming rate.

Patrick Roach, general secretary of the NASUWT teaching union, said the Government will need to provide ‘clarification’ to schools.

He told the Observer: ‘In light of recent changes to plans for relaxing lockdown measures, the Government needs to provide greater clarity to school leaders, teachers and parents about what this will mean for the reopening of schools in September.’

A warning from chief medical officer Professor Chris Whitty that the country is ‘near the limit’ for opening up society will prompt questions for parents as well as teachers, Mr Roach told the newspaper.

‘If schools are to reopen safely, the government will need to give them clarification about what they need to do to take account of the latest scientific evidence and advice, as well as sufficient time to review and, if necessary, adjust their reopening plans,’ he added.

Meanwhile, Dr Paul Hunter, professor of medicine at the University of East Anglia, told the Observer that although risks to children and teachers are likely to be low, this transmission would increase infection rates. 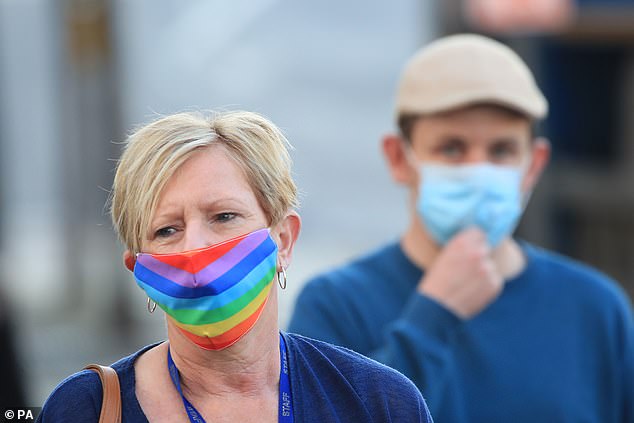 ‘Would reopening schools increase the spread of Covid-19 in the population? Yes. I think it would very probably do that,’ he told the newspaper.

It comes after a member of the Scientific Advisory Group for Emergencies (Sage) said ministers might have to consider closing pubs in England in order for lessons to start again next month.

Professor Graham Medley, a member of the Scientific Advisory Group for Emergencies (Sage), said England could have to consider closing pubs in order to reopen schools next month.

When asked about the chief medical officer Professor Chris Whitty’s prediction that the country was ‘near the limits’ of opening up society, the London School of Hygiene and Tropical Medicine academic told BBC Radio 4’s Today programme: ‘I think that’s quite possible.

‘I think we’re in a situation whereby most people think that opening schools is a priority for the health and wellbeing of children and that when we do that we are going to reconnect lots of households.

‘It might come down to a question of which do you trade off against each other and then that’s a matter of prioritising, do we think pubs are more important than schools?’

Professor Graham Medley, who chairs the Sage sub-group on pandemic modelling, said this scenario was ‘quite possible’.

‘I think we’re in a situation whereby most people think that opening schools is a priority for the health and wellbeing of children and that when we do that we are going to reconnect lots of households,’ he told BBC Radio 4’s Today programme.

‘It might come down to a question of which do you trade off against each other and then that’s a matter of prioritising, do we think pubs are more important than schools?’

Meanwhile, the Department of Health and Social Care (DHSC) was forced to deny that it had abandoned its pledge to regularly test care home residents through the summer following a leaked memo from Professor Jane Cummings, the Government’s adult social care testing director.

The Tory administration has come in for criticism for failing to do more to prevent Covid-19 infections from reaching care homes, where some of the country’s most vulnerable population reside, during the initial spring peak.

According to the Times, Prof Cummings wrote to local authority leaders to inform them that ‘previously advised timelines for rolling out regular testing in care homes’ were being altered because of ‘unexpected delays’.

Regular testing of residents and staff was meant to have started on July 6 but will now be pushed back until September 7 for older people and those with dementia, PA news agency understands.

A department spokeswoman confirmed there were issues with ‘asymptomatic re-testing’.

The problems relate to a combination of factors, including a restraint on the ability to build testing kits, already announced issues with Randox swab kits, overall lab capacity, and greater than anticipated return rate of care home test kits.

The DHSC spokeswoman said: ‘It is completely wrong to suggest care homes were deliberately deprived of testing resources and any care home resident or member of staff with symptoms can immediately access a free test.

‘We continue to issue at least 50,000 tests a day to care homes across the country and prioritise tests for higher-risk outbreak areas.

‘A combination of factors have meant that a more limited number of testing kits, predominantly used in care homes, are currently available for asymptomatic re-testing and we are working round the clock with providers to restore capacity.’

DHSC said it would not comment on leaked documents when asked about Prof Cummings’ memo.