Briefcase-sized spacecraft will continue to float in space peacefully around the Sun Artist’s rendition of the CubeSats, WALL-E and EVE. Image credit: NASA/JPL-Caltech NASA has said goodnight to its two experimental CubeSats, sent into space to monitor America’s InSight probe as it landed on Mars, after failing to communicate with the gizmo duo since January. 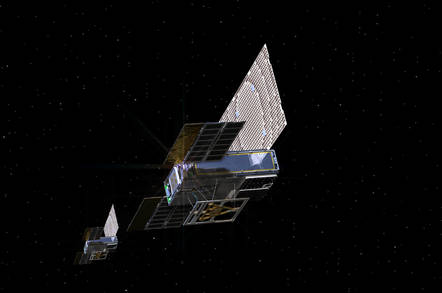 NASA has said goodnight to its two experimental CubeSats, sent into space to monitor America’s InSight probe as it landed on Mars, after failing to communicate with the gizmo duo since January.

Scientists relied on the mini machines, affectionately named Wall-E and Eve after the robots in the Pixar film WALL-E, to relay information about the status of the InSight lander as it touched down on the Red Planet in November. The mission, known as MarCO, was a foray into using CubeSats for interplanetary communications.

As the InSight lander made itself at home on Mars, after the pair finished beaming back diagnostic data and photos of InSight’s landing, the duo continued on, orbiting around the Sun. NASA estimated that Wall-E is more than a million miles (1.6 million kilometres) past Mars, and Eve is further away at almost two million miles (3.2 kilometres).

Repeated attempts to communicate with the satellites have failed. Wall-E fell silent on December 29, while Eve survived a little longer but stopped talking after January 4. NASA eggheads aren’t sure what went wrong exactly, though engineers have a few ideas.

Wall-E may have a faulty thruster, causing it to wobble as it can’t control its position correctly, hampering its ability to send and receive coherent commands. Or maybe they both can’t point their solar panels toward the Sun to power up, and have run out of juice.

Each weighing only 13.5kg and measuring about the size of a briefcase, the small spacecraft are much cheaper to manufacture and send to space than fully fledged probes.

“There’s big potential in these small packages,” said John Baker, the MarCO program manager, on Tuesday. “CubeSats – part of a larger group of spacecraft called SmallSats – are a new platform for space exploration that is affordable to more than just government agencies.”

NASA used to the CubeSats to see if they are a viable and thrifty way to track of spacecraft during the landing process, arguably the most vital part of any mission. The gizmos provided real-time updates of Insight’s progress toward the dust world’s surface, making it slightly less nerve-wracking for ground control. The pair also beamed by photographs.

“This mission was always about pushing the limits of miniaturized technology and seeing just how far it could take us,” said Andy Klesh, the chief engineer of MarCO. “We’ve put a stake in the ground. Future CubeSats might go even farther.”

There’s a small chance that Wall-E and Eve could spring back to life. They both start inching closer to the Sun this summer, and the team will attempt to contact them again. It’s unknown if the batteries or any other components will last that long, however.

Wall-E and Eve were launched last year in May. Although they may never wake up, they will be remembered for the marvelous images of Mars they managed to beam back. ®