The Samsung Galaxy S10e should have been the de facto S10 of choice for most people. It does not sacrifice an awful lot from the S10 or S10 Plus, costs much less, looks great and performs very well. It has the same processor, an OLED display, the same software, a headphone jack and absolutely flies

The Samsung Galaxy S10e should have been the de facto S10 of choice for most people. It does not sacrifice an awful lot from the S10 or S10 Plus, costs much less, looks great and performs very well.

It has the same processor, an OLED display, the same software, a headphone jack and absolutely flies through any task we threw at it. But the battery life is plainly not good enough and it spoils the experience for us.

Just as we found with the S10 and S10 Plus, the European Exynos version of the S10e struggles wildly with erratic and poor battery life, and makes this phone very good instead of great.

The Galaxy S10e starts from £669 / $749. This prices it below the iPhone XR, Apple’s current comparable device if we are comparing the S10 and S10 Plus to the iPhone XS and XS Max.

You can spend less on phones but at the premium end only the OnePlus 6T and Xiaomi Mi 9 manage to undercut the S10e with any notable success.

It is available to buy now from Samsung, or in the UK you can get it from Carphone Warehouse, O2, EE, Vodafone and Three. In the US it’s on sale from Walmart and Best Buy.

E is for extra small

Even though it has a 5.8in display the Galaxy S10e can be considered pretty small thanks to the new design. It’s practically bezel-less with a 19:9 aspect ratio and a single cut out camera in the display in the top right.

You might like this, you might not, but for the most part it intrudes less than a notch does and fits a big screen into a small phone. Its existence shifts status icons to the left but if that doesn’t bother you then the phone is easily a one-handed one for a lot of use cases.

That display is flat rather than having the curved edges of the other two S10 phones. This is a reason in itself to consider the S10e, as you won’t find yourself registering false inputs with your palms on the curved edges.

The S10e comes in the same green, white or black as the other S10 phones, but it’s the only one you can get in a stark canary yellow. Our green review unit is our favourite colour by a mile, but fingerprints and smears do show up on the back of all versions, just like with every glass backed phone out there.

The same but different

So, what is different about the S10e that makes it cheaper than the other two phones? It has fewer cameras with one on the front and two on the back compared to the three found on the other two S10 phones.

Photos from the cameras are generally excellent, with the usual Samsung saturation and sharpening that may not be to everyone’s tastes. A lot of the shots in the below gallery compare the main sensor to what can be captured from the same position when using the ultra-wide. 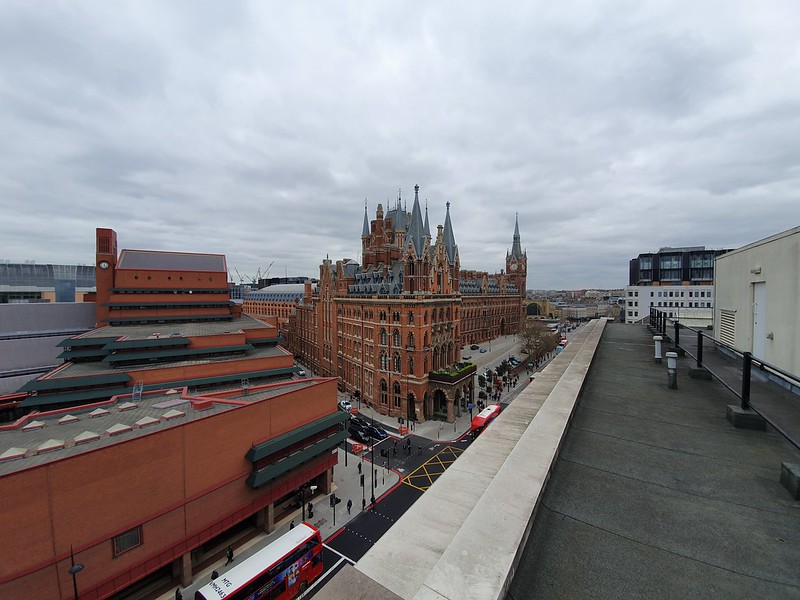 The S10e has a lower resolution 1080p display but it’s still an excellent quality OLED panel, just not quite as stunning as the more expensive S10 models. Viewing angles are excellent as is viewing in direct sunlight, an area Samsung is consistently best at nailing.

The phone settles for a side mounted physical fingerprint sensor that is also the power button, eschewing the in-screen sensor. It is one of the best we’ve ever tested, with the lightest of tops opening the phone every single time – it is better than the in-screen sensors on the other S10s.

But we’d have preferred it halfway down the side of the phone rather than at the top of the right edge where it sits, as we accidentally opened the phone many times with our thumb putting the phone back in our right front pocket. This won’t be an issue for everyone but proved annoying in our testing.

In Europe the S10e has Samsung’s own Exynos 9820 processor, and this is the model we have reviewed. In the rest of the world the phone has the Qualcomm Snapdragon 855. This has been the case for a few years now with Samsung’s Galaxy S phones as Samsung believes its own chips can perform just as well as Qualcomm’s, and keeps Samsung a viable provider of silicon in its own right.

The phone runs on the Exynos chip incredibly well, blasting through everything without a single stutter. Multitasking using tons of apps is no issue, animations are perfectly fluid and it’s powerful enough to run high end mobile games.

With 6GB RAM as standard it’s a little behind the 8GB on the S10 and S10 Plus but we barely noticed a difference in day to day use – the S10e is not a slow phone.

The benchmarks below clock the S10e for processor power (Geekbench) and graphics capabilities (GFXBench) against the other S10 phones, and other smartphones of the same rough power and price.

The S10e more than holds its own, something that is reflected in real world use. This phone is smaller, it’s not a downgrade.

It is a huge shame then that the Exynos chip is clearly unable to manage battery life. The worst thing about the S10e by a country mile is the poor and erratic battery life.

We tested the phone for over a week and found the most screen on time we could eke out of it was two and a half hours (it is a similarly painful story on the S10 and S10 Plus despite those phones’ larger batteries). The S10e has a small 3100mAh cell and boy, does it show.

Without doing much at all we found the phone haemorrhaging percentage points. On one evening we took the phone off charge at around 6pm and by 11pm it was below 50%. This was just an evening out taking a couple of photos but otherwise barely using the phone at all.

When using the phone for a whole working day away from power we were constantly worried about how much battery we had left and while it admittedly never fully ran out, our experience using the phone was spoiled by it. There aren’t many phones we actively stop using as much because we think the battery might conk out on us, but the S10e is one of them.

We have conceded that it never died on us, and lighter users will have no problem. But the longevity here is notably under par.

The inclusion of wireless charging is nice-to-have, but the reverse wireless charging on offer is still a gimmick. Sure, if you charge your S10e face down overnight then another Qi compatible device can charge on top of it (slowly) but otherwise it’s merely a party trick until the tech improves.

Despite this flaw the software experience is definitely the best it’s ever been on a Samsung phone. One UI, based on Android 9 Pie, is by far Sammy’s best interpretation of Android.

There’s a decent dark mode built in (finally!), clean looking menus and icons and thoughtful changes to notifications. But this is Samsung, and you’ll have to do quite a lot of fine tuning if you want to get rid of bloatware, annoying persistent notifications and things like secure Wi-Fi prompts. But when you have it sorted, the S10e is just great.

It runs amazingly well on the hardware with absolutely no stutter at just as good a rate as the S10 and S10 Plus. You need not be worried about this being slower than the other phones, there is no compromise in performance with the S10e (as with the comparable iPhone XR), and that is a great thing.

And yes, Bixby still sucks. It is only useful for voice commands if you are incredibly specific with the task but also with the wording. Asking it for a map of ‘this area or ‘the area gave us either the London street we were in or a place in Cyprus respectively.

We don’t use Bixby and neither should you. A long press of the home button still brings up Google Assistant. Phew. Much better.

If it were not for the battery life woes then we might have said that the S10e was the best of the S10 bunch. As it stands, the Exynos version we tested is merely an excellent phone. Which is still great! But it’s a real shame.

Ignore the battery issues though and there is hardly any compromise from the other two S10 phones that most people will notice. The display is still amazing, performance is top drawer, the cameras are the same minus a lens and there’s full waterproofing, wireless charging, a headphone jack and dual stereo speakers.

And yet we still think the regular S10 is the best S10 for most people. We understand that with the physically smallest battery the S10e would always have the worst battery life of the bunch, but when all three models have sub-par longevity then it is painfully noticeable on this one.
The S10e is very, very good but it could have been great. Maybe check out the Snapdragon 855 model to see if the battery life is better.