Teachers are far more likely to spread Covid-19 than children, according to a leading scientist.  Shamez Ladhani, a paediatric infectious diseases specialist at Public Health England (PHE), said that school staff will maintain social distancing rules during work but are more likely to break them outside the classroom.  It comes as data shows just one

Teachers are far more likely to spread Covid-19 than children, according to a leading scientist.

Shamez Ladhani, a paediatric infectious diseases specialist at Public Health England (PHE), said that school staff will maintain social distancing rules during work but are more likely to break them outside the classroom.

It comes as data shows just one in 10,000 schools have been hit by a virus outbreak since they reopened in June. 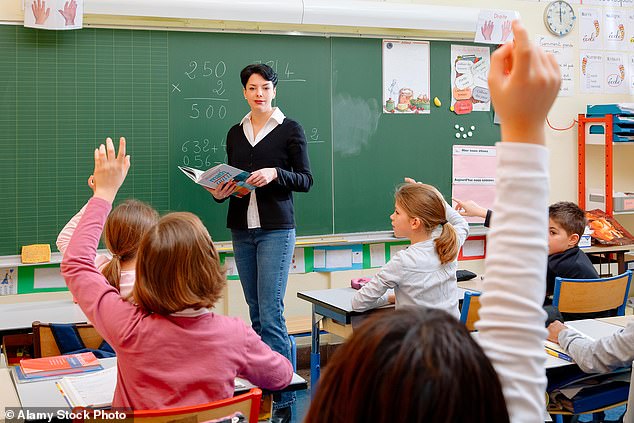 Teachers are far more likely to spread Covid-19 than children, according to a leading scientist (File image)

A PHE analysis, published yesterday, found there were 67 single confirmed cases, four ‘co-primary cases’ (two or more linked cases diagnosed at the same time) and 30 outbreaks of Covid-19 in schools during June.

It said the majority of cases linked to outbreaks were in staff and warned that school staff needed to be ‘more vigilant for exposure outside the school setting to protect themselves, their families and the educational setting’.

Dr Shamez Ladhani, paediatric infectious diseases specialist at PHE, who headed the monitoring of England’s schools, told The Times: ‘We need to educate the educators.

‘There’s a clear need for a duty of care outside the school setting so staff need to protect themselves, and in turn other staff and pupils.’

He added: ‘Staff are very good at social distancing and infection control in the classroom, but upon leaving the school environment these measures are more likely to be broken, potentially putting themselves and their colleagues at risk.’

Boris Johnson has pleaded with parents to send their children back to the classroom as he takes charge of the drive to get all schools open next week.

The Prime Minister warned last night that pupils risk permanent damage to their future life chances if they continue to stay away.

Mr Johnson, who tomorrow morning will return to No10 following his summer break, is in a race against the clock to get schools ready and persuade parents they are safe in time for the start of the new term.

The Government faces a big test to deliver on its promise to get all children full-time back following its shambolic handling of A-level and GCSE results.

Many pupils in England have not been to class since March, when schools were closed except to vulnerable children and those of keyworkers. 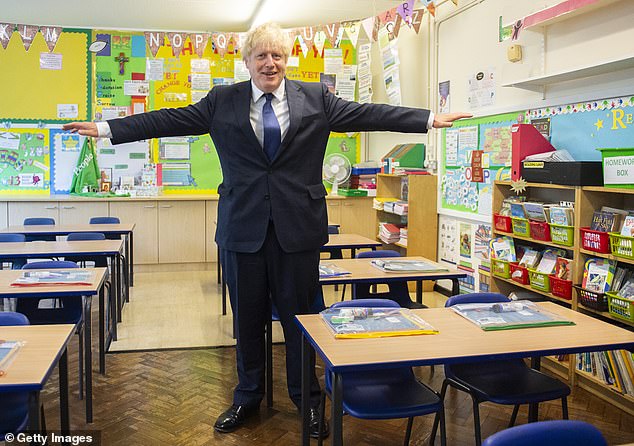 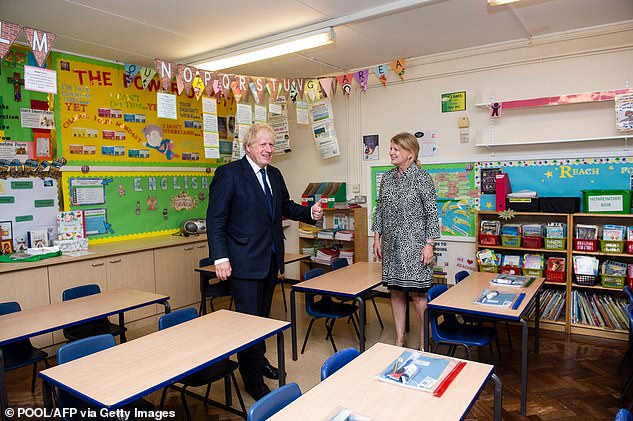 Just 1 in 10,000 schools were hit by virus cases when their doors opened again

Just one in 10,000 schools had a virus outbreak when they reopened in June, a major study has revealed.

The research by Public Health England also found that out of one million children who attended pre-school and primary schools during this time, only 70 became infected with Covid-19.

Youngsters were far more likely to catch the virus at home from their parents than in the classroom, the authors concluded, suggesting that schools were safer than their own homes.

The authors, whose research analysed all outbreaks in educational settings in England in June, stressed that pupils were unlikely to pass the virus onto each other in classrooms and also that there were ‘very few’ cases of them catching it from or passing it on to teachers.

There were a total of 30 outbreaks in schools reported during June – where two or more people were infected – which was just 0.01 per cent of the total number open, or one in 10,000. There are 24,323 schools in England.

These outbreaks affected 70 children and 128 staff, showing teachers were at higher risk. The authors also found that 20 of the 30 outbreaks occurred through teachers passing it on to each other, or on to pupils.

Only two outbreaks involved children passing it onto each other.

The authors wrote: ‘Students mostly acquired the [Covid-19] infection at home, usually from a keyworker or healthcare worker parent. Most children were asymptomatic and only identified as part of contact tracing after their parent developed Covid-19.

‘Reassuringly, we found very little transmission between the students.

Additionally, there were very few transmission events between staff and students.’

Public Health England is due to publish a second study, which is expected to show that older pupils are much more likely to catch the virus than younger children.

The findings are based on a very small number of schools which experienced outbreaks but they are nonetheless likely to raise concerns amongst teaching unions and the parents of secondary school pupils.

Mr Johnson declared that there was a ‘moral duty to reopen schools to all pupils safely’ as he insisted that the return was guided by the Government’s scientific and medical experts.

‘We now know far more about coronavirus than we did earlier this year,’ he said.

‘As the chief medical officer has said, the risk of contracting Covid-19 in school is very small and it is far more damaging for a child’s development and their health and wellbeing to be away from school any longer.

‘This is why it’s vitally important that we get our children back into the classroom to learn and to be with their friends.

‘Nothing will have a greater effect on the life chances of our children than returning to school.’

His comments came after the UK’s chief and deputy chief medical officers issued a joint statement seeking to reassure parents that it was safe to send their children back to school.

They said ‘very few, if any’ children and teenagers would come to long-term harm from the virus solely by attending school, while there was a ‘certainty’ of harm from not returning.

And teachers were not at any increased risk of dying compared to the general working-age population.

He said local lockdown measures would be used if school reopening leads to a rise in infections, with the possibility of national restrictions if necessary.

Every school will be provided with coronavirus testing kits so they can quickly check pupils, when they reopen in September.

Ministers have given the green light for the resumption of breakfast and after-school clubs to provide extra childcare so more parents can get back to work.

Teaching unions last night insisted that they supported the return to full time education, but still issued grim warnings about the Government’s strategy.

The National Education Union said it wanted ministers to spell out exactly what will happen if there is an outbreak.

Joint general secretary Kevin Courtney said: ‘School staff, parents and pupils are being sorely let down by government because of a lack of a Plan B and of ensuring robust track trace and test is in place. We believe the Government is negligent in the extreme.’

A Daily Mail poll on Saturday revealed the strength of feeling among voters about the need to get pupils back into the classroom full-time.

Seventy-eight per cent said it should be the Government’s top priority if it is safe to do so.

Given the choice of whether schools should reopen or pubs remain open if only one was allowed, 80 per cent said they would choose schools, while 13 per cent opted for pubs. 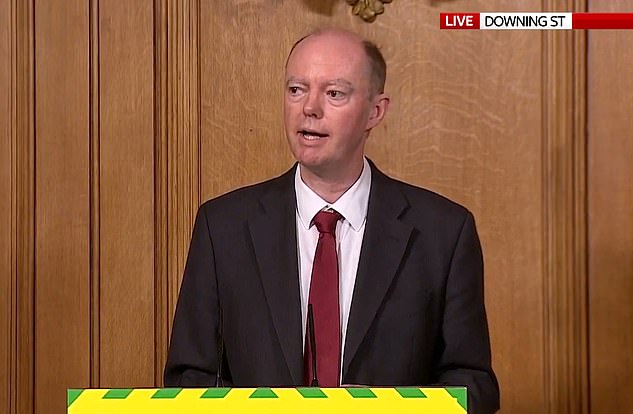 Professor Whitty also warned that it was unlikely that a vaccine would be available by the end of this year.

He said there was a ‘reasonable chance’ of one being ready for next winter, 2021/22.

‘I would be delighted if it came earlier rather than later but I’d be quite surprised if we had a highly effective vaccine ready for mass use in a large percentage of the population before the end of winter, certainly before this side of Christmas,’ he said.

ARE CHILDREN IMMUNE TO COVID-19?

Children are unlikely to fall seriously ill with Covid-19 and the risk of them dying from the disease is very low, dozens of studies have shown.

Scientists warn children are not immune, however. Anyone can get infected with the virus — technically called SARS-CoV-2.

But eight months since the pandemic began in China, doctors around the world are still baffled as to why youngsters appear resistant to the disease.

Reasons for their resilience to the disease are still unclear, despite a wave of trials devoted to unraveling the truth on the contentious topic.

Evidence shows the coronavirus preys on existing ill health and is most dangerous for the elderly. In comparison, the flu poses a big threat to children.

Barely any children have died of Covid-19. Only six under-14s have succumbed to the illness in England and Wales, according to official data.

Cambridge University’s Sir David Spiegelhalter said their risk was ‘unbelievably low’, adding: ‘I don’t think any [group] has been safer in the history of humanity.’

Statisticians analysing the outbreak in the UK even say youngsters are more likely to be hit by lightning than be killed by the virus.

Cambridge academics say the death rate for under-14s is around 0.00068 per cent — the equivalent of seven deaths for every million cases.

London School of Hygiene and Tropical Medicine researchers found in June that children often escape the disease without any symptoms.

Only 21 per cent of infected 10 to 19-year-olds had symptoms. By contrast, the rate of symptoms among over-70s was three times higher.

Getting fewer symptoms and milder illness may make children less likely to spread it, other researchers have claimed.

But two major studies last week, from China and Germany, concluded that children are capable of transmitting the virus.

Some academics believe youngsters are better protected against Covid-19 because they are used to catching other less harmful coronaviruses.

This may then teach their immune system to recognise SARS-CoV-2, allowing them to fight off the infection without getting seriously ill.

Other experts say their body may be faster to react or their bodies better able to cope with viral infections because they are younger.