The Cult of the CEO, 87% of Irish employees think it’s important for their CEO to be inspiring In the age of personality and social media, it’s not surprising that leaders of large organisations can be perceived either as visionary talismans for success, or lacklustre liabilities, responsible for stagnation. But do we expect too much of them? In a survey conducted by Hanover Communications and Censuswide on the traits and values of CEOs,

In the age of personality and social media, it’s not surprising that leaders of large organisations can be perceived either as visionary talismans for success, or lacklustre liabilities, responsible for stagnation. But do we expect too much of them?

In a survey conducted by Hanover Communications and Censuswide on the traits and values of CEOs, we asked 501 Irish employees currently working in companies of 50+ staff about the importance of various character traits in an ideal CEO or head of a company.

Clarity matters more than ever, and almost three quarters (71%) of respondents agreed that a CEO with a clear personality that everyone in the business understands is more likely to run a successful business.

Specifically, they agreed that it’s important for the ideal CEO to be inspiring (87%), motivating (87%), and future-thinking (87%). In comparison, only 40% and 30% would describe the current head of their company as motivating and inspiring respectively – a stark contrast between an ideal leadership figure and reality.

So even though leaders might be clear on intent, according to employees, they aren’t always practising what they preach. 73% of Irish employees surveyed agree that their own company CEO, or the equivalent in their company, want to have a positive impact and 64% believe their CEO or equivalent acts as a role model but 1 in 8 (13%) aren’t sure they practice what they preach.

The cult of the chief executive is by no means limited to big business – organisations large or small stand or fall on whether the leader at the top turns out to be a super-hero or an arch-villain. 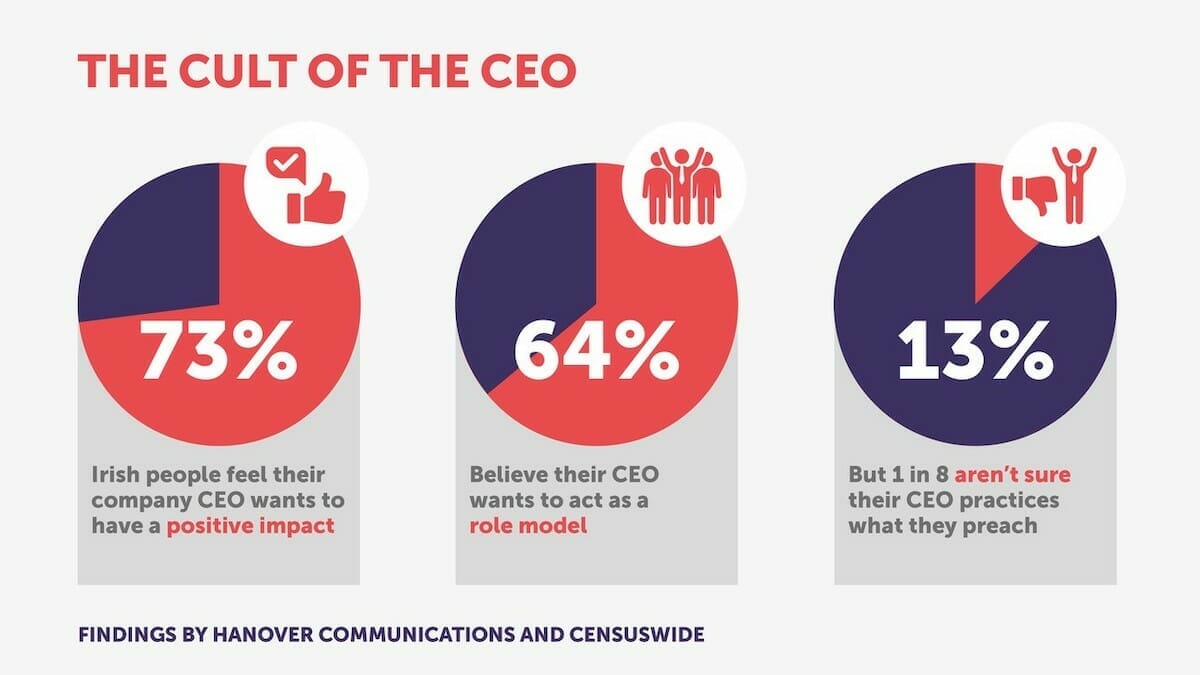 The research results were presented by Hanover Dublin at an event titled ‘The Cult of the CEO’. Commenting on the results, Lorna Jennings, Managing Director of Hanover Communications Dublin said “The media has had an enormous impact on our perceptions of CEOs and what makes a good one. The media shares the desire of its consumers to simplify complexity by identifying real people to serve as shorthand for what are, in reality, many-headed organisations.

Where 20 years ago you might have seen a short clip on RTE of a CEO’s latest unfortunate slip of the tongue or a stock tumbling mistake, today you can watch it replayed on social media, on RTE News Now and hear it cut down into animating broadcast clips with endless talking heads and commentators ascribing ever more significance to what began as a board room comment.

A more dangerous effect of the way we paint ordinary people as storybook characters are that they start believing it. Having told our chief executives that they are the company, it’s not entirely unreasonable of them to allow such delusions of grandeur to go to their heads