The Latest: Trump arrives in House chamber to deliver SOTU

WASHINGTON (AP) – The Latest on President Donald Trump’s State of the Union address (all times local):

President Donald Trump has arrived in the House chamber to deliver his State of the Union speech.

Trump, wearing a red tie, was greeted with a round of applause from Republicans as well as some Democrats, including House Speaker Nancy Pelosi.

The chamber is filled with his family members, Cabinet, a handful of Supreme Court justices, members of Congress and their invited guests.

Trump is expected to strike a unifying tone in his remarks, which are expected to touch on subjects including immigration, trade negotiations with China and U.S. troop deployments in the Middle East. 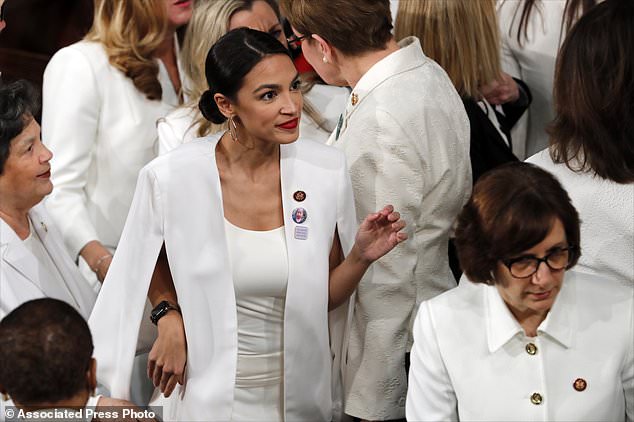 The speech is being delivered a week later than originally scheduled after Pelosi said Trump would not be allowed to speak in front of the House Chamber until the partial government shutdown came to an end.

Energy Secretary Rick Perry is the so-called designated survivor for this year’s State of the Union address.

By tradition, one Cabinet secretary is closeted away at a secure, undisclosed location to ensure continuity of government in case disaster strikes while government leaders attend the speech.

The choice of Perry was confirmed by a White House official, who was not authorized to disclose the person’s identity, and spoke on condition of anonymity.

Trump’s choice this year was limited by the number of “acting” secretaries in the Cabinet. Only Senate-confirmed secretaries (and natural-born citizens) in the line of succession to the presidency can assume control of government in a crisis.

As Pelosi climbed the dais, they gathered in the aisle of the Democratic side of the House, raising their voices and hands as other members raised their cell phones and recorded the moment. Most women on that side of the House chamber were wearing the color favored by suffragettes and the president’s opponents who want him to see them from the dais.

The palpable excitement comes after the November elections sent a record number of women, most of them Democrats, to Congress.

President Donald Trump will call on Congress to “break decades of political stalemate” in Tuesday night’s State of the Union speech.

Trump will tell the American people that the country is “winning each and every day,” but has “a moral duty to create an immigration system that protects the lives and jobs of our citizens.”

And he will accuse “wealthy politicians and donors” of pushing “for open borders while living their lives behind walls and gates and guards.”

That’s according to early excerpts of the speech released by the White House.

Trump is expected to strike a unifying tone in his remarks, despite his current showdown with Democrats over border-wall funding that led to the longest government shutdown in the nation’s history.

Hours ahead of the State of the Union address, at least a dozen members of Congress were milling around the House chamber.

A number of women were wearing white, the color that suffragettes favored and that President Donald Trump’s opponents want him to see.

The scene was a preview for what’s expected to be an especially tense event just over a week after Trump capitulated on his demand for border-wall funding in exchange for ending the longest government shutdown in history. House Speaker Nancy Pelosi, who led the effort to block the funding, will sit behind Trump as he delivers the address, along with Vice President Mike Pence.

Security was extraordinarily tight outside the Capitol building ahead of Trump’s arrival later in the evening.

President Donald Trump’s Washington hotel is buzzing ahead of the State of the Union address.

The Pennsylvania Avenue hotel’s soaring lobby is packed with onlookers in advance of the speech, which staffers told guests is to be broadcast on the TVs with the volume up.

Among those spotted in the lobby: the president’s eldest son, Donald Trump Jr., and his girlfriend, former Fox News personality Kimberly Guilfoyle.

Also there were Trump allies like Sen. Rand Paul of Kentucky and conservative advocate Charlie Kirk.

Some of those in attendance were spotted consuming steak frites and grilled octopus.

President Donald Trump’s two Supreme Court picks are among four justices expected to attend the State of the Union. Justice Ruth Bader Ginsburg will not be among them.

The 85-year-old Ginsburg is recovering from cancer surgery in December. She made her first public appearance since the surgery on Monday at a concert given by her daughter-in-law in Washington, D.C. Ginsburg did not attend Trump’s speech last year, either.

The bitter partisanship of the past two years is on full display hours before President Donald Trump is expected to call for optimism and unity in his State of the Union address.

Senate Minority Leader Chuck Schumer said Tuesday that the president talks about unity in his annual addresses to the nation but “spends the other 364 days of the year dividing us.”

Trump responded that Schumer was “just upset that he didn’t win the Senate, after spending a fortune.”

Lawmakers from both sides of the aisle were skeptical ahead of Trump’s televised address. Democrats see little evidence the president is willing to compromise. Even Trump’s staunchest allies know that bipartisan rhetoric read off of a teleprompter is usually undermined by scorching tweets and unpredictable policy maneuvers.

Iowa Republican Steve King says his State of the Union guest will be Lynette Hardaway, otherwise known as the video blogger Diamond.

King tweeted on Tuesday that since he only has one guest seat, he flipped a coin between inviting Hardaway and her video partner, Rochelle Richardson, also known as Silk. Hardaway won the coin toss.

The Iowa congressman has come under fire recently for questioning in a New York Times article how white supremacy became an offensive term. House Republicans stripped King of his committee seats and some called on him to resign. King denies he is a racist.

Both women, known as Diamond & Silk, are African-American and prominent Trump supporters.

Among House Speaker Nancy Pelosi’s State of the Union guests are the Planned Parenthood president, active-duty transgender service members and chef Jose Andres. Andres heads a charity that began in 2010 to feed earthquake survivors in Haiti and that offered free food and coffee to furloughed workers during the partial government shutdown.

Lawmakers often make a political statement with their invitees.

Pelosi’s husband, Paul, and one of her five children, the filmmaker Alexandra Pelosi, will also join.

The recruiting arm for Senate Republicans is poking at Stacey Abrams even before she delivers the formal rebuttal to President Donald Trump’s State of the Union message.

The National Republican Senatorial Committee released a brief video online Tuesday stringing together snippets of past comments by Abrams, including when the Democrat says, “This is not a speech of concession” after her narrow loss to Republican Brian Kemp in last year’s race for Georgia governor.

Other clips show Abrams talking about impeachment, presumably for Trump, and telling an interviewer that she tells folks she’s met herself and “I’m not overly impressed.”

At that point, the words, “Finally, something we agree on,” appear on screen.

Abrams is being encouraged to run for Senate next year against first-term Republican Sen. David Perdue of Georgia.

Melania Trump is going early to the State of the Union again to spend time with her guests.

Spokeswoman Stephanie Grisham says the first lady escorts the guests to help put them at ease and so they have time to look around the Capitol.

Trump and his wife returned to the White House together after the speech. 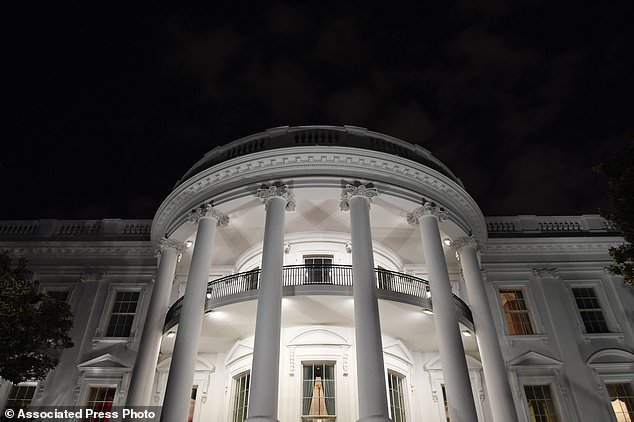 A view of the White House in Washington before President Donald Trump departs and heads to Capitol Hill to deliver his State of the Union address, Tuesday, Feb. 5, 2019. (AP Photo/Susan Walsh) 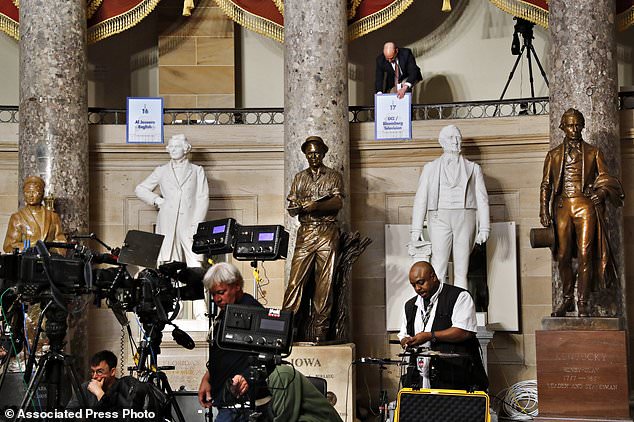 Television crews set up their equipment in Statuary Hall in the Capitol, Tuesday, Feb. 5, 2019, ahead of President Donald Trump’s delivery of the State of the Union on Capitol Hill in Washington. (AP Photo/Jacquelyn Martin) 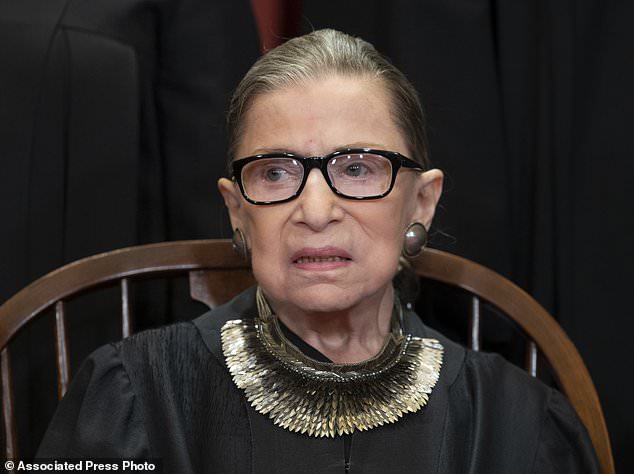 FILE – In this Nov. 30, 2018 file photo, Associate Justice Ruth Bader Ginsburg, nominated by President Bill Clinton, sits with fellow Supreme Court justices for a group portrait at the Supreme Court Building in Washington. Ginsburg is making her first public appearance since undergoing lung cancer surgery in December. The 85-year-old Ginsburg is attending a concert at a museum a few blocks from the White House that is being given by her daughter-in-law and other musicians. Patrice Michaels is married to Ginsburg’s son, James. Michaels is a soprano and composer. (AP Photo/J. Scott Applewhite, File) 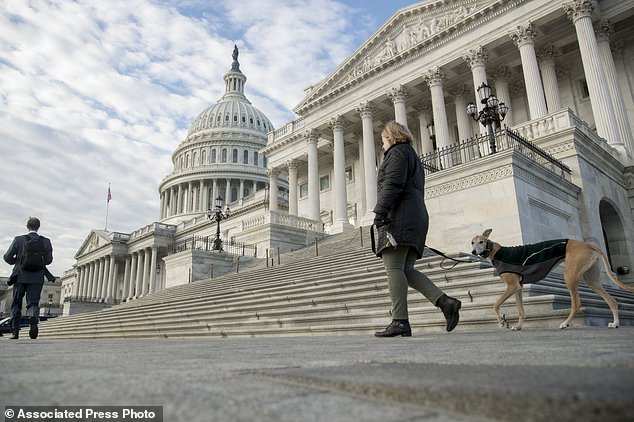 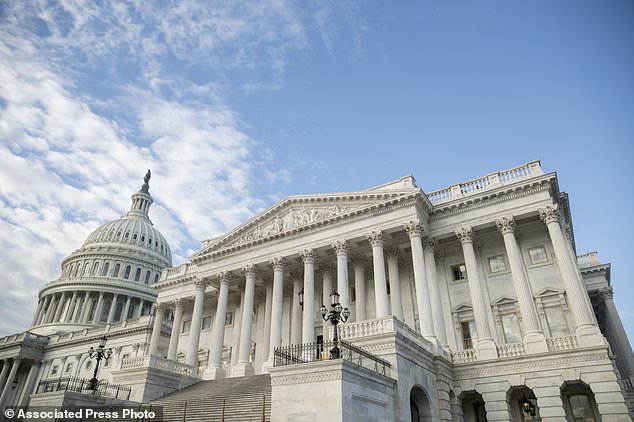