After blowing everyone away with the properly terrifying Get Out, Jordan Peele is back to do it all over again with Us, another black-led horror movie with a phenomenal cast. Us is coming out soon and is undoubtedly one of the most exciting new movies this year – so here’s what you need to know

After blowing everyone away with the properly terrifying Get Out, Jordan Peele is back to do it all over again with Us, another black-led horror movie with a phenomenal cast.

Us is coming out soon and is undoubtedly one of the most exciting new movies this year – so here’s what you need to know about the Get Out follow-up, including the release date, cast, and the latest trailer.

When is Us coming out?

Luckily for, well, us, Us is releasing very soon. It’ll be out in both the UK and US from 22 March 2019, though it’ll premiere a little earlier that month at the SXSW festival.

If you want to pre-order tickets, check out Fandango or Atom Tickets in the US, or Vue or Cineworld in the UK.

There’s only been one full trailer so far for Us, but it’s a doozy – sinister, gory, and very unsettling. Watch it right here:

Check out the posters

There are three sinister posters for the movie, and you can check them out in our Flickr gallery: 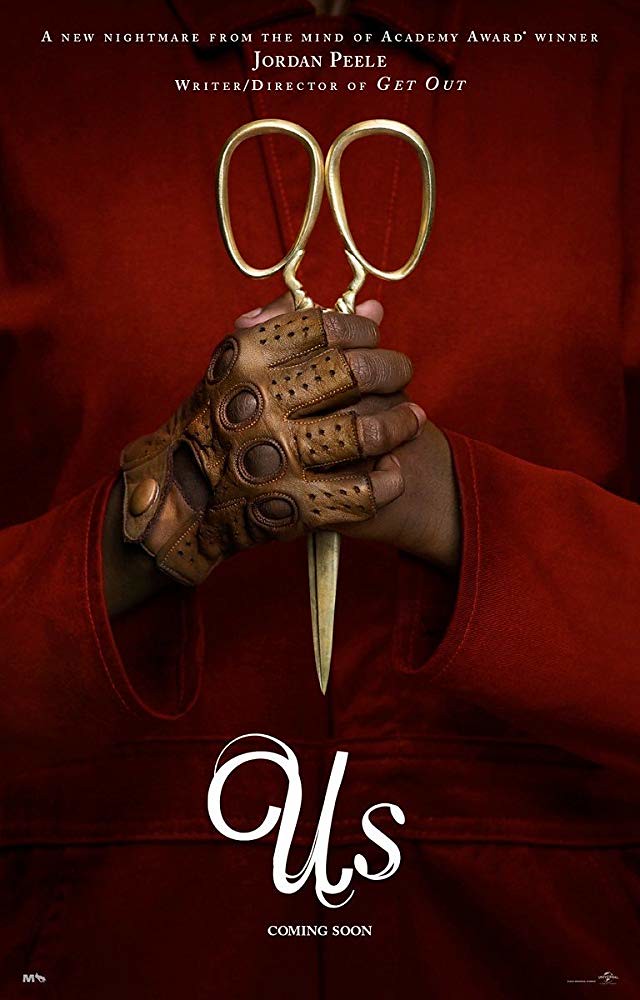 First up, you might be surprised to learn that Peele hasn’t gone back to his Get Out cast to populate Us, and instead he’s found new leads.

Lupita Nyong’o (of all sorts of fame) and Winston Duke (Black Panther’s M’Baku) are at the forefront, as the mother and father of the central family, with their kids played by Evan Alex and Shahadi Wright Joseph.

They’ll be joined by Elisabeth Moss and Tim Heidecker, playing a couple that they’re friendly with, but beyond that the cast seems pretty small. The only other really notable name so far is Yahya Abdul-Mateen II – Black Manta in Aquaman – though we don’t yet know what exactly his part is.

If you’ve watched the trailer above, you’ll know the basic premise: a family goes on holiday and find themselves haunted – and attacked – by evil duplicates of themselves. In the trailer Nyong’o’s character claims that “they think like us… they know where we are,” which suggests that these aren’t just visual duplicates of the family, but something deeper.

One of the trailer shots shows Nyong’o on a beach littered with bodies, so it looks like the duplicates will rack up a bit of a body count, and there are also plenty of shots of Moss in mortal peril, so her and her husband seemingly aren’t safe either.

What we don’t know yet – and presumably won’t until we get to see the film for ourselves – is exactly what the duplicates are, or why they’re attacking the Wilson family. There are a few shots of some sort of beige facility with a lot of caged rabbits, which suggests an explanation that’s at least loosely scientific, but at this point it could be anything.

There’s one thing we do know: unlike Get Out, this isn’t about race. Peele has made this point a few times, most emphatically in an interview with Rolling Stone, when he explained why he wanted to make a horror flick with a predominantly black cast that wasn’t making a point about race or racism:

“It’s important to me that we can tell black stories without it being about race,” Peele says. “I realized I had never seen a horror movie of this kind, where there’s an African-American family at the center that just is. After you get over the initial realization that you’re watching a black family in a horror film, you’re just watching a movie. You’re just watching people. I feel like it proves a very valid and different point than Get Out, which is, not everything is about race. Get Out proved the point that everything is about race. I’ve proved both points!”