After almost 40 years serving the UK on military operations across the world, iconic RAF Tornado jets have returned home for the last time. Two of the RAF’s beloved workhorses took to the skies from RAF Akrotiri in Cyprus today, becoming the last of the RAF’s Tornado fleet to fly back to the UK. First

After almost 40 years serving the UK on military operations across the world, iconic RAF Tornado jets have returned home for the last time.

Two of the RAF’s beloved workhorses took to the skies from RAF Akrotiri in Cyprus today, becoming the last of the RAF’s Tornado fleet to fly back to the UK.

First entering service in 1979, the supersonic jets have been used in operations across the world, most recently bombarding ISIS with air-to-ground missiles pushing the terrorist group back through Syria and Iraq.

Families and friends of the present-day squadron members were on hand to welcome them back to RAF Marham, Norfolk, this afternoon. 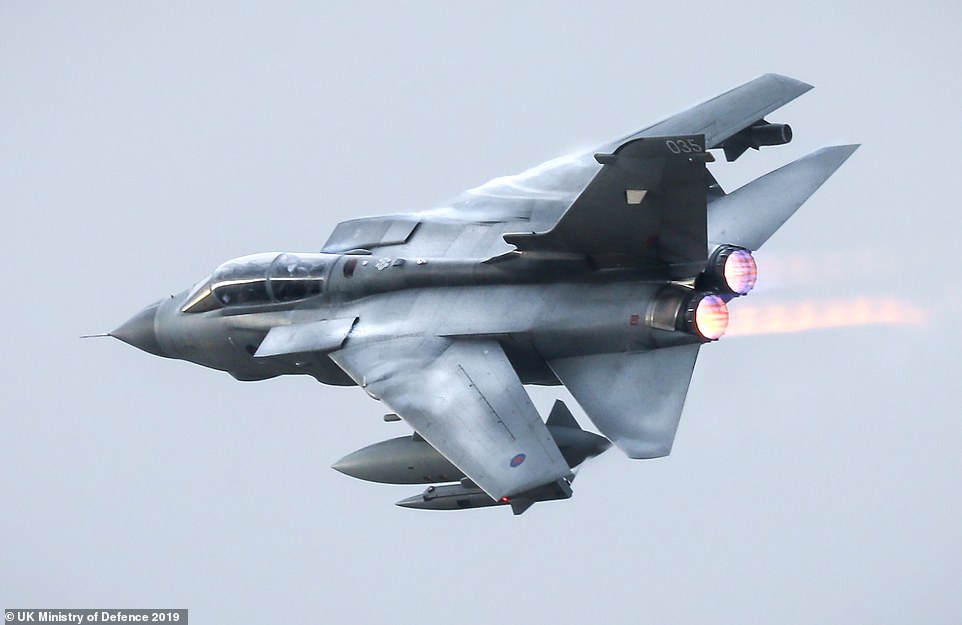 Magnificent Flying Machines: The RAF Tornado GR4, initially introduced in 1979 and first in service in 1982, has now been retired. Pictured above: the last Tornado to take to the skies to return from Cyprus 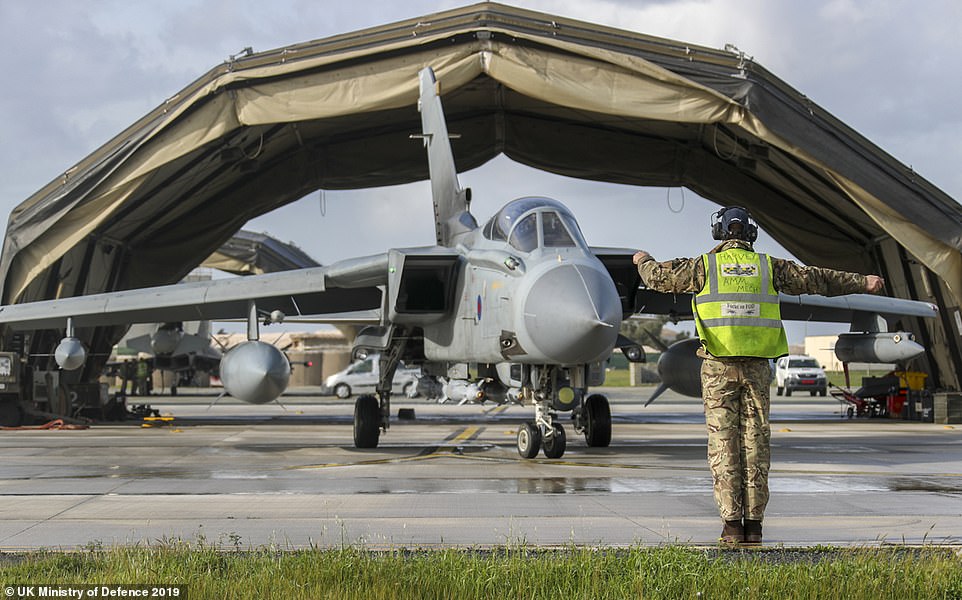 The Tornado has variable geometry wings which can be spread or swept back as required. With wings fully spread the plane has a wingspan of more than 45 feet, but with wings tucked back for fast straight flying it measures just 28 feet across 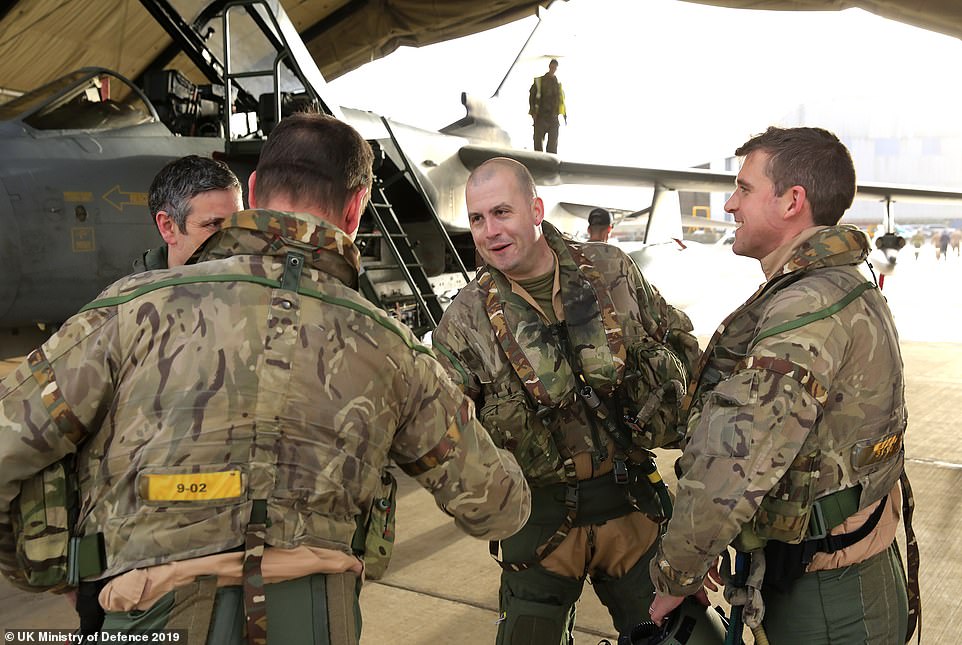 Pictured here are the aircrew of the final sortie shortly after landing for the last time. On January 31st of January 2019, the RAF operated the final operational sortie of the Tornado GR4 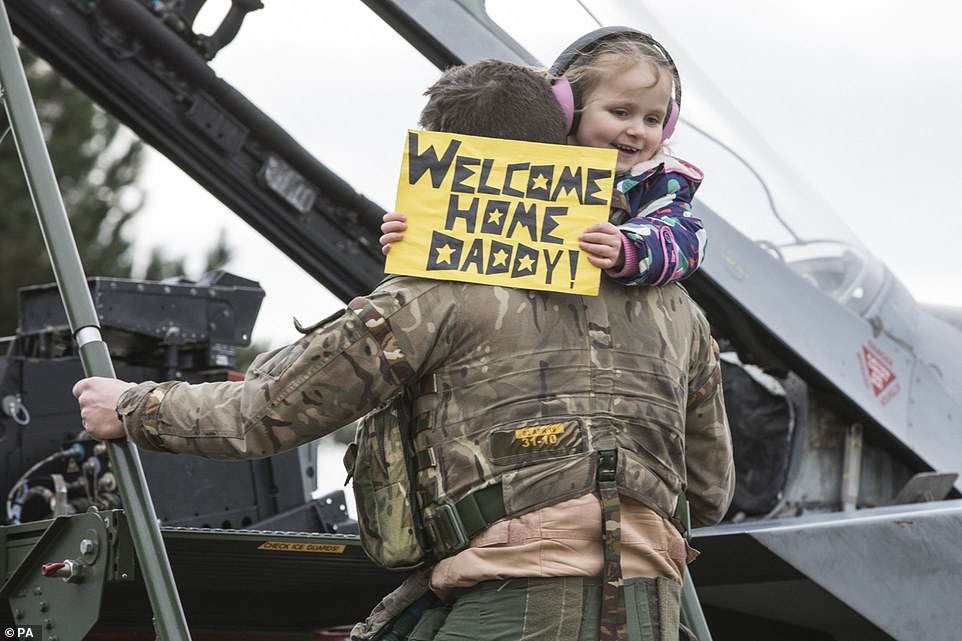 Squadron Leader Bonning descends the steps of a Tornado aircraft while holding his daughter after piloting a RAF Tornado GR4 back to its home base at RAF Marham in Norfolk. The vehicle has just completed operations in the Middle East for the final time ahead of its retirement 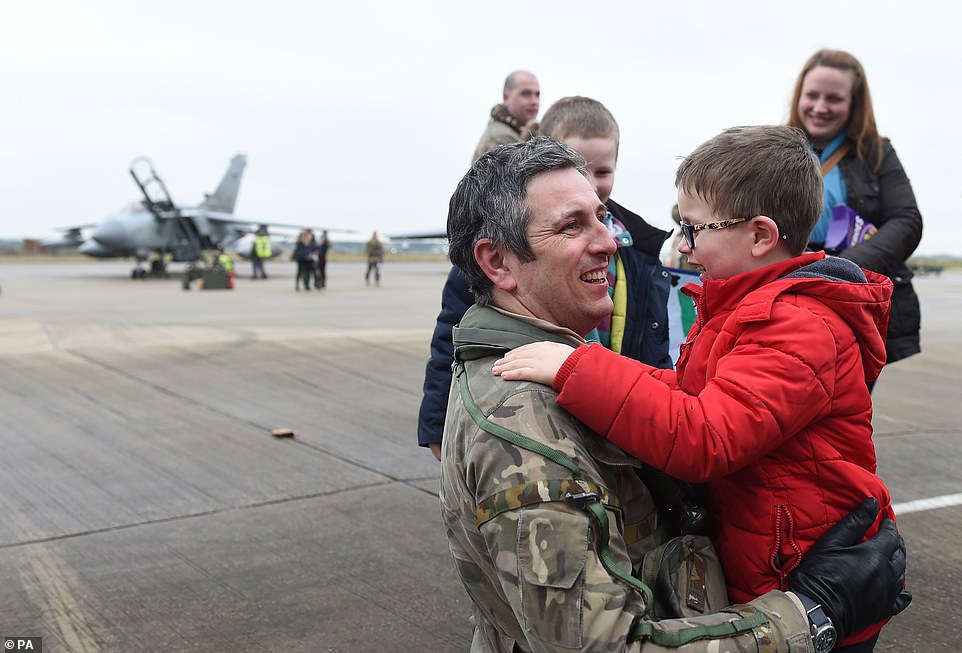 Squadron Wing Commander James Heeps hugs his son Henry, six, after piloting the last RAF Tornado GR4 back to its home base in Norfolk. The vehicle will then only be used for training purposes over the UK in the intervening period 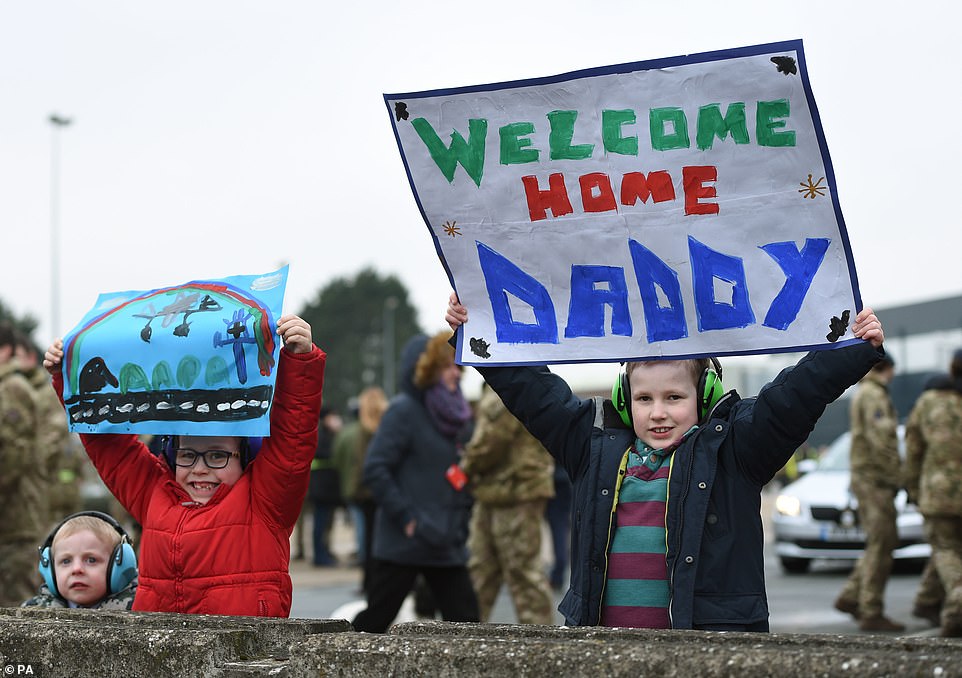 George, Henry and William watch as their father Squadron Wing Commander James Heeps pilots the last RAF Tornado GR4 back home. The capabilities of the Tornados are now being delivered by RAF Typhoon jets, which will replace them

The Tornado will be officially retired from service at the end of March and will only be used for training purposes over the UK in the intervening period.

Originally named the Tornado GR1 the aircraft’s first use in live operations was during the Gulf War in 1991, when 60 Tornado GR1s were deployed from bases in Saudi Arabia and Bahrain.

Later they were upgraded to the GR4 model, which has been used ever since over the skies of Kosovo, Afghanistan, Iraq and Syria.

Defence Secretary Gavin Williamson said: ‘It is with a heavy heart, but enormous pride, that we bid farewell to the Tornado from operations. This truly is the end of an era, having played a vital role in keeping Britain and its allies safe for four decades.

‘But, after so long in service, it is only right that we now look to the future. The combination of our state-of-the art F35s and the Typhoon’s new weapon systems will keep us as a world leader in air combat for a generation.’

Chief of the Air Staff, Air Chief Marshal Sir Stephen Hillier said: ‘My sincerest congratulations to the Tornado Force, returning home after more than four years of continuous commitment to defeating Daesh in Iraq and Syria – an exceptional effort from everyone, well done and thank you.

‘As a Tornado GR4 pilot myself, I have seen the aircraft develop over its nearly 40 years of service into an outstanding combat aircraft, flown, maintained and supported by similarly outstanding air and groundcrew.

‘The Tornado Force has been continuously deployed on operations since 1990, serving with immense distinction in Iraq, Syria, Afghanistan, Libya and the Balkans.

‘I will personally be very sad to see the Tornado retire, but it is time now to pass the baton to our next generation combat aircraft. The F-35B Lightning is now operational and the Typhoon is now fully multi-role capable and able to take on the Tornado’s missions.

‘We can all take immense pride in what the Tornado has achieved in defence of the nation over nearly four decades, and reflect back on the courage, commitment and achievements of everyone who has contributed to the success of this extraordinary aircraft.’ 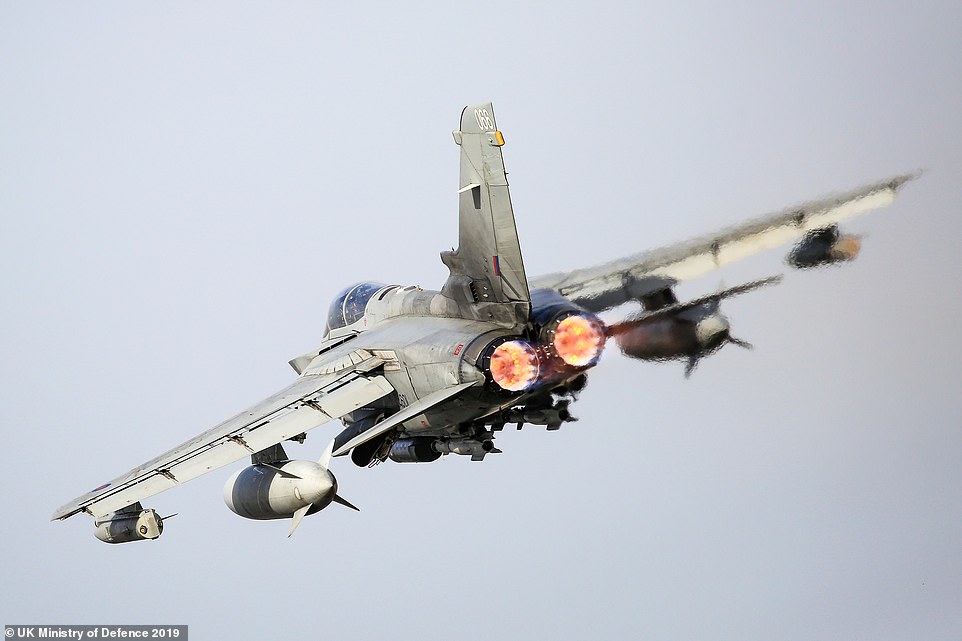 The Tornado, whose powerful jet engines can propel it to a top speed of 1.3 times the speed of sound, will be officially retired from service at the end of March and will only be used for training purposes over the UK between now and then 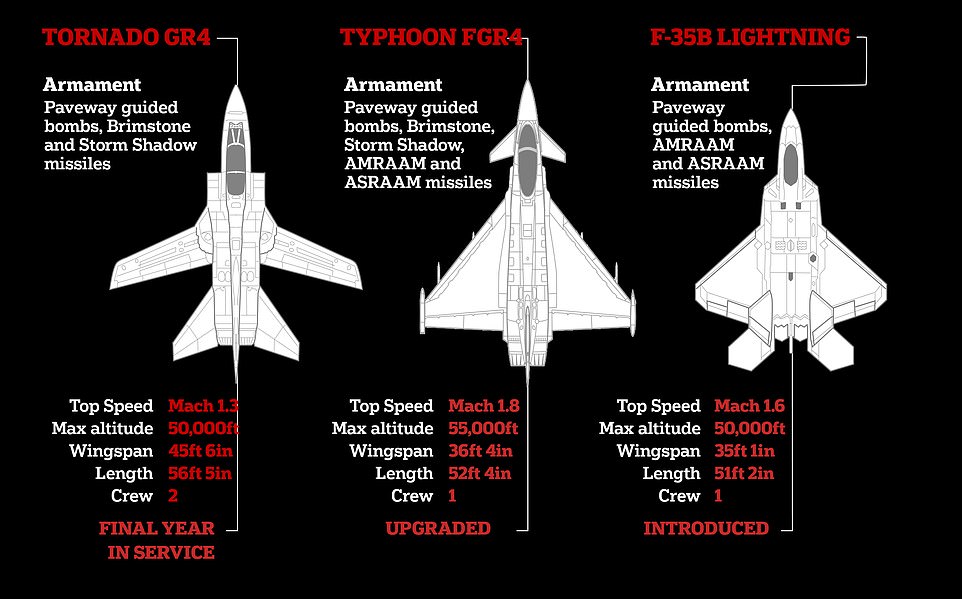 The RAF is modernising its fleet as the Tornado reaches the end of its 40-year service. The Typhoon can now carry the powerful Brimstone bombs which were formerly the preserve of the Tornado, and the stealth F35 Lightningtook to the skies for the first time last month 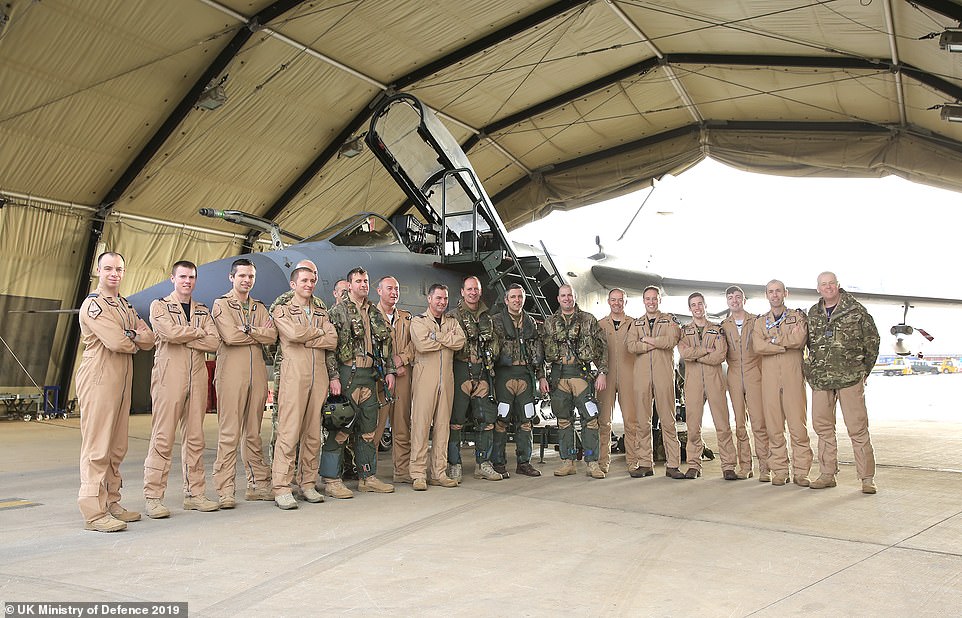 Pilots flight crew and mechanics smile proudly next to the last Tornado to return to the UK, at the end of 40 years in the air 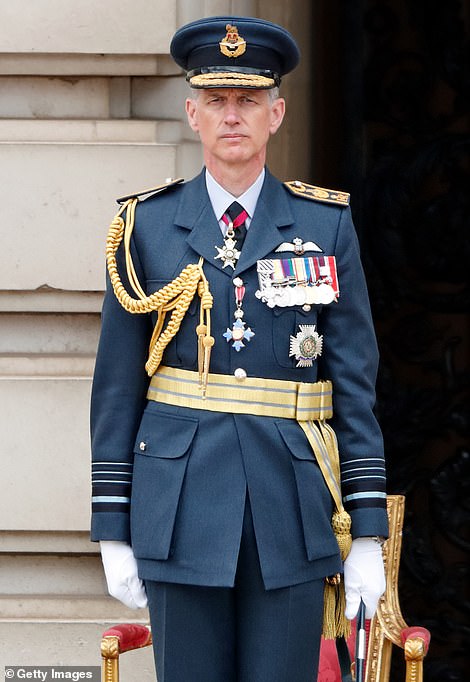 Chief of the Air Staff, Air Chief Marshal Sir Stephen Hillier, a former Tornado pilot, said he would be ‘very sad’ to see the planes retire

The capabilities of the Tornados are now being delivered by RAF Typhoon jets.

Under ‘Project Centurion’, worth £425million over the past three years, the Typhoon can now launch the Meteor air-to-air missile, the Stormshadow deep strike cruise missile and the precision attack missile Brimstone.

When the Typhoon was first introduced it was not equipped to carry the Brimstone missile.

Tornados were used more than Typhoons during Nato air strikes in Libya in 2011 because they equipped with Brimstone and the latest 500lb Paveway IV laser- and GPS-guided bombs.

Typhoons have only had Paveway IVs since 2014 and in Libya had to use the older, larger, and less sophisticated 1,000lb or 2,000lb Paveway II ordnance.

The RAF said its improved RAF Typhoon jets ‘will form the backbone of the UK’s combat air fleet’, alongside the recently introduced fleet of stealth F-35 Lighting jets over the coming years.

The RAF said it had already run operation trials in which the Typhoon Lighting jets worked together and said ‘the evidence gathered has confirmed the potency of the combination and demonstrated the effectiveness of both platforms when operating alongside on another’. 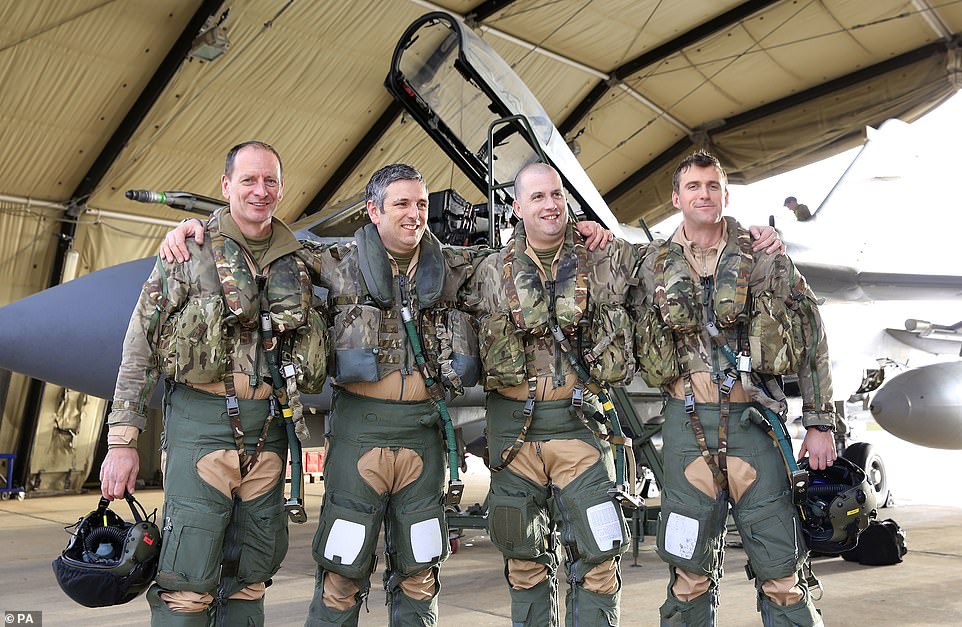 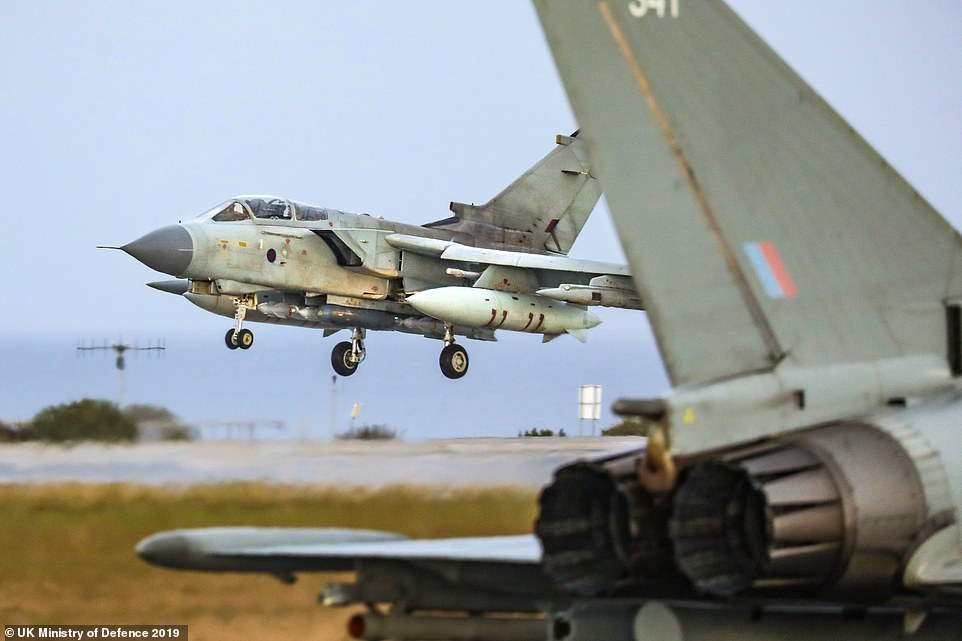 Even after the introduction of the more modern Eurofighter Typhoon aircraft, the Tornado remained a key part of the RAF’s battle fleet in part because it can carry a total of 12 powerful Brimstone air-to-surface missiles which are capable of hitting moving targets 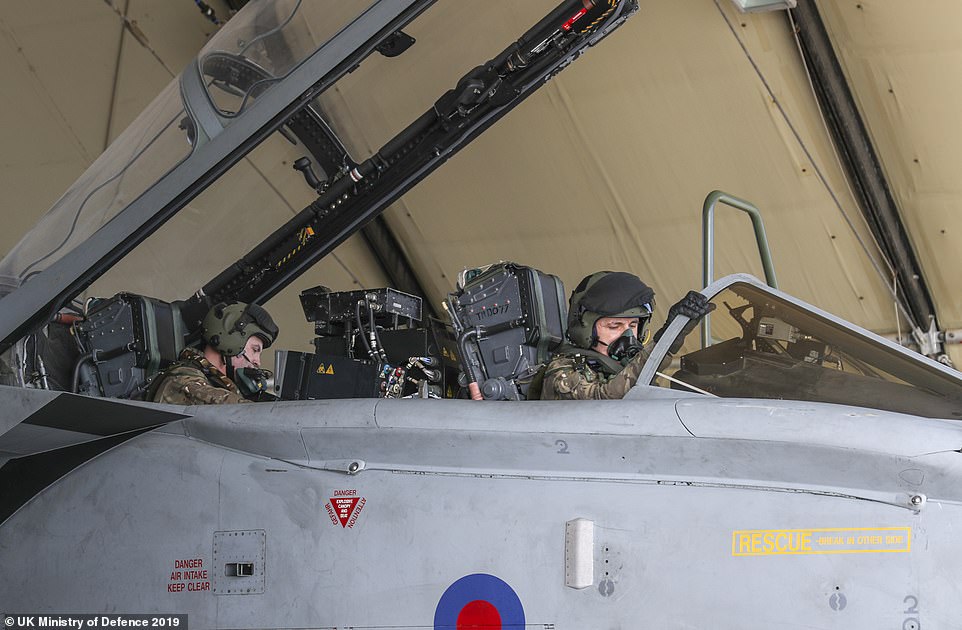 The first time pilots flying Tornado saw action was during the Gulf War in 1991, when 60 Tornado GR1s were deployed from bases in Saudi Arabia and Bahrain

Shot from their Tornado

RAF Pilot John Peters and navigator John Nichol were paraded in front of cameras by their Iraqi captors after their Tornado was shot down .

The two flight lieutenants were held captive for a total of 47 days.

The Tornado can trace its DNA all the way back to work by Sir Barnes Wallis, better known for developing the ‘bouncing bomb’ used by 617 Sqn ‘The Dambusters’ in 1943, who began work on variable geometry (VG) wing designs in the 1950s.

He realised with a VG aircraft’s wings swept forwards – spread wide – it could use shorter runways and display greater manoeuvrability, and by sweeping them back could achieve maximum high-speed performance.

Although no planes were built from his designs, VG wings became commonly used on fighter aircraft through the latter half of the twentieth century, including on the Tornado.

It was initially created by a British-German-Italian conglomerate, Panavia, which was set up in Germany to build the craft.

The Tornado programme was initiated in 1968, and the first prototype flew on 14 August 1974.

The initial RAF requirement was for 220 aircraft, and the first of these was delivered to RAF Cottesmore in July 1980, becoming the mainstay of the RAF strike force in June 1982.

RAF Tornados took part in the 1999 Kosovo war and the GR4 upgrade was completed in time for Operation Telic, the UK’s deployment in Iraq from 2003 to 2011.

Tornados were used in Afghanistan from 2009 until the withdrawal of UK forces in 2014. According to the Ministry of Defence, they flew over 5,000 sorties and logged more than 33,500 flight hours during this time. 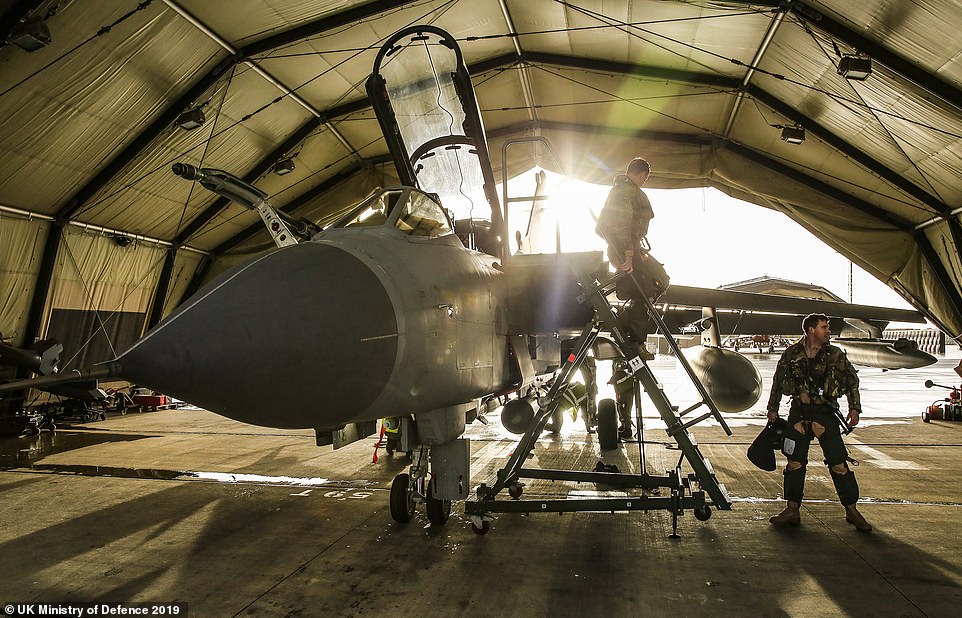 The sun sets on the Tornado: The powerful jets were conceived in the late 1960s, based on previous work by Sir Barnes Wallis of ‘Dambusters’ fame.  They flew for the first time in 1974 and entered service in 1979. Today the last Tornado returned home